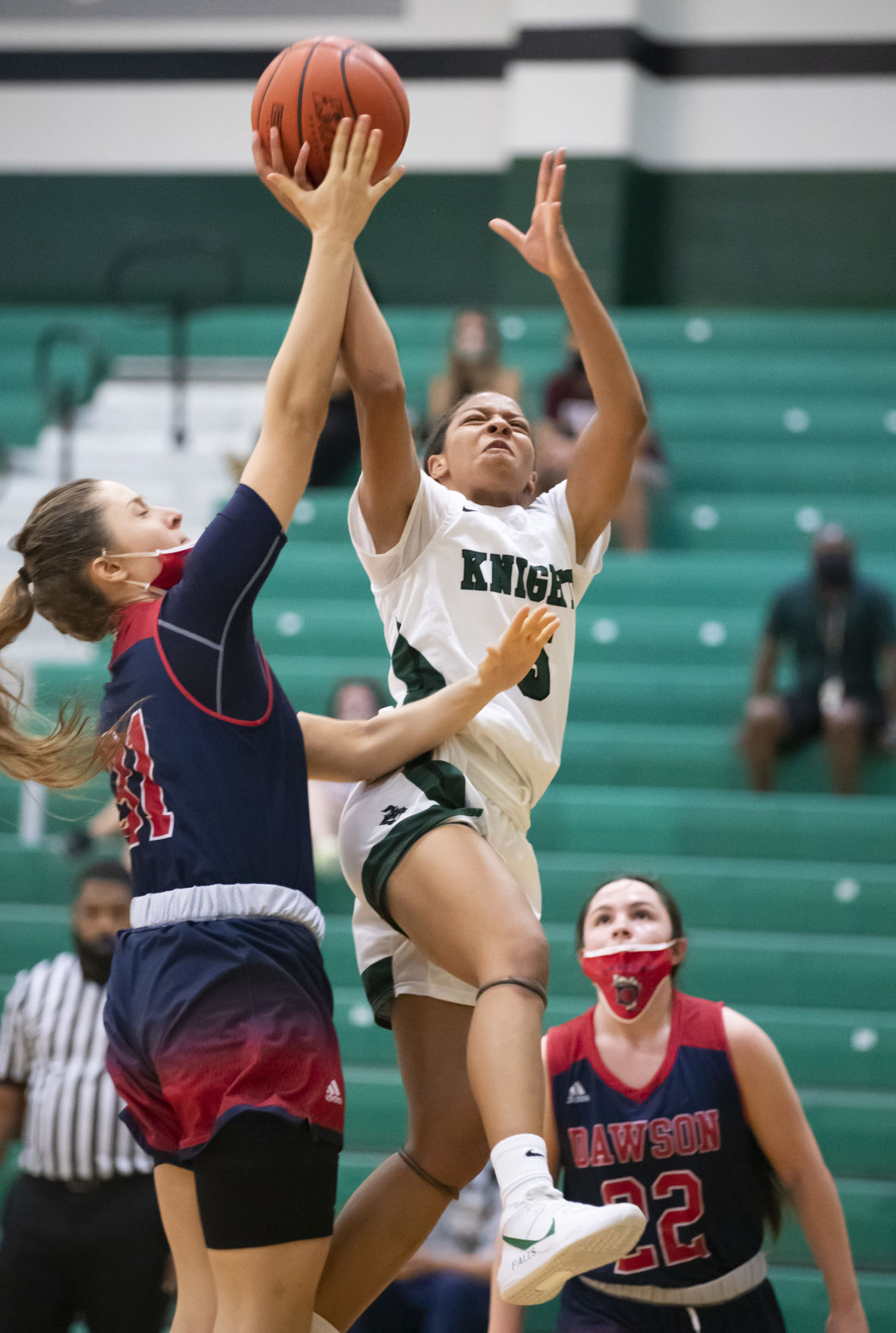 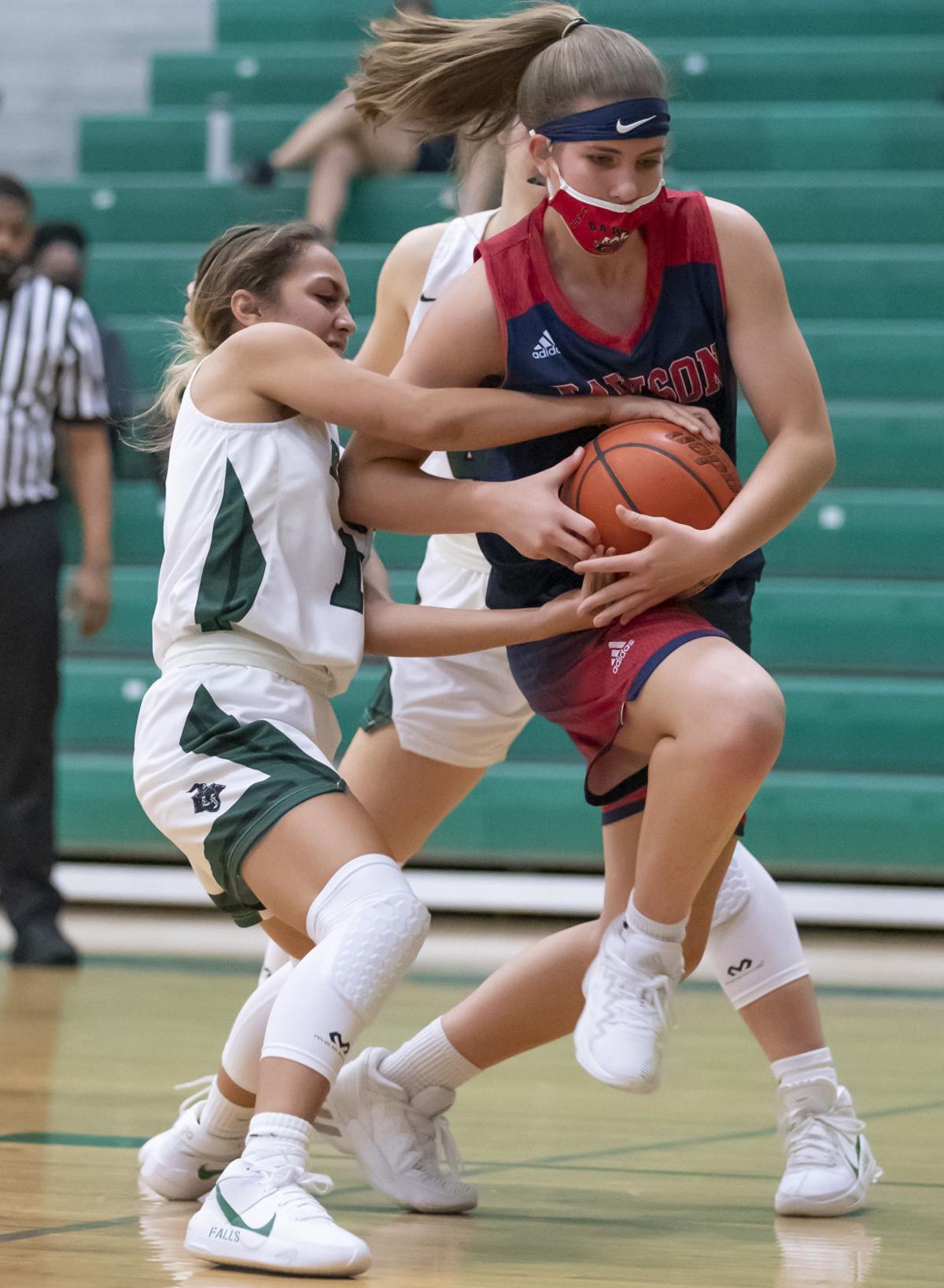 Clear Falls’ Giselle Arce and Dawson’s Sarah Allison fight for possession of the ball during the first quarter at Clear Falls High School in League City on Saturday, Nov. 14, 2020. 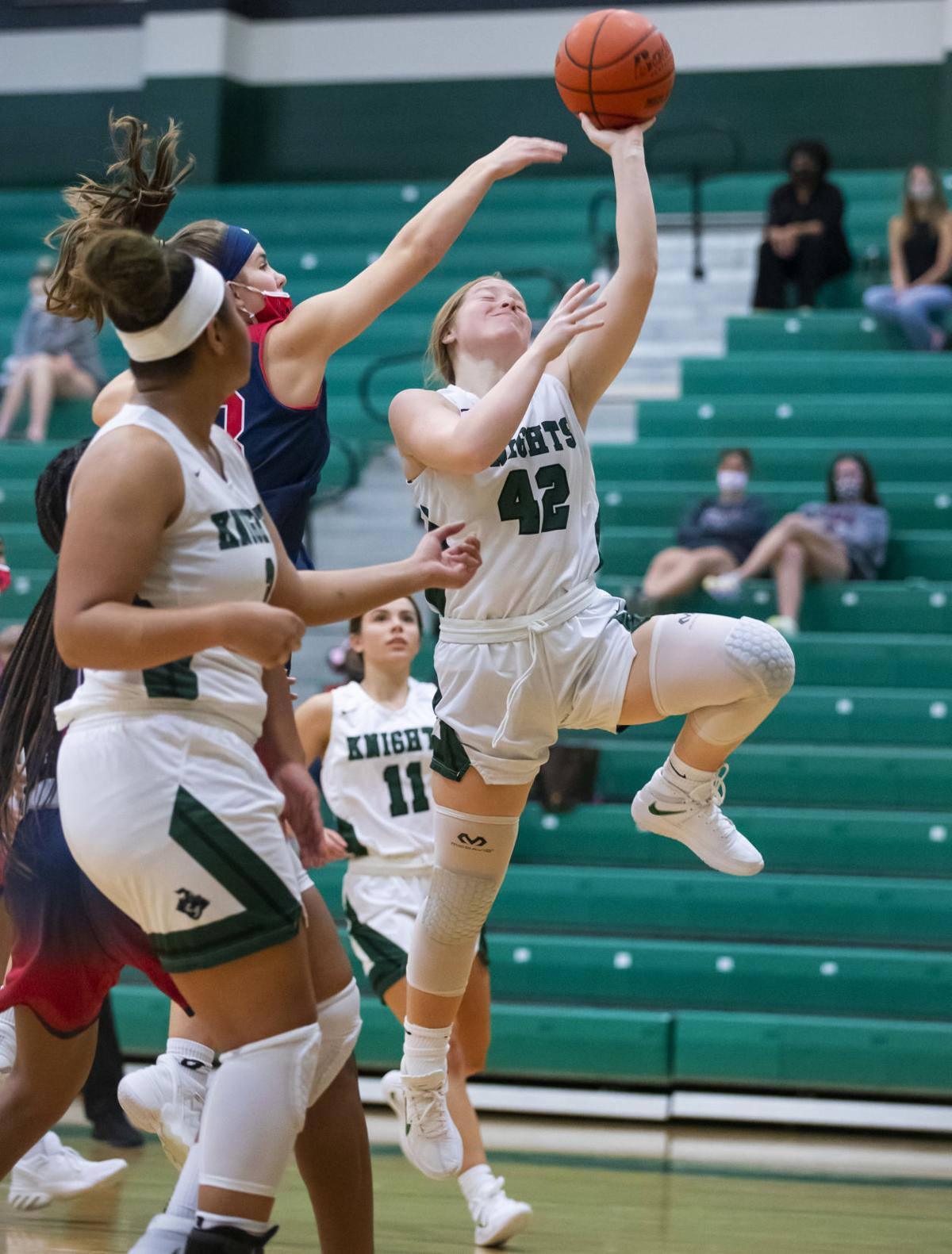 Clear Falls’ Lauren Rieke goes up for a shot during the first quarter against Dawson at Clear Falls High School in League City on Saturday, Nov. 14, 2020. 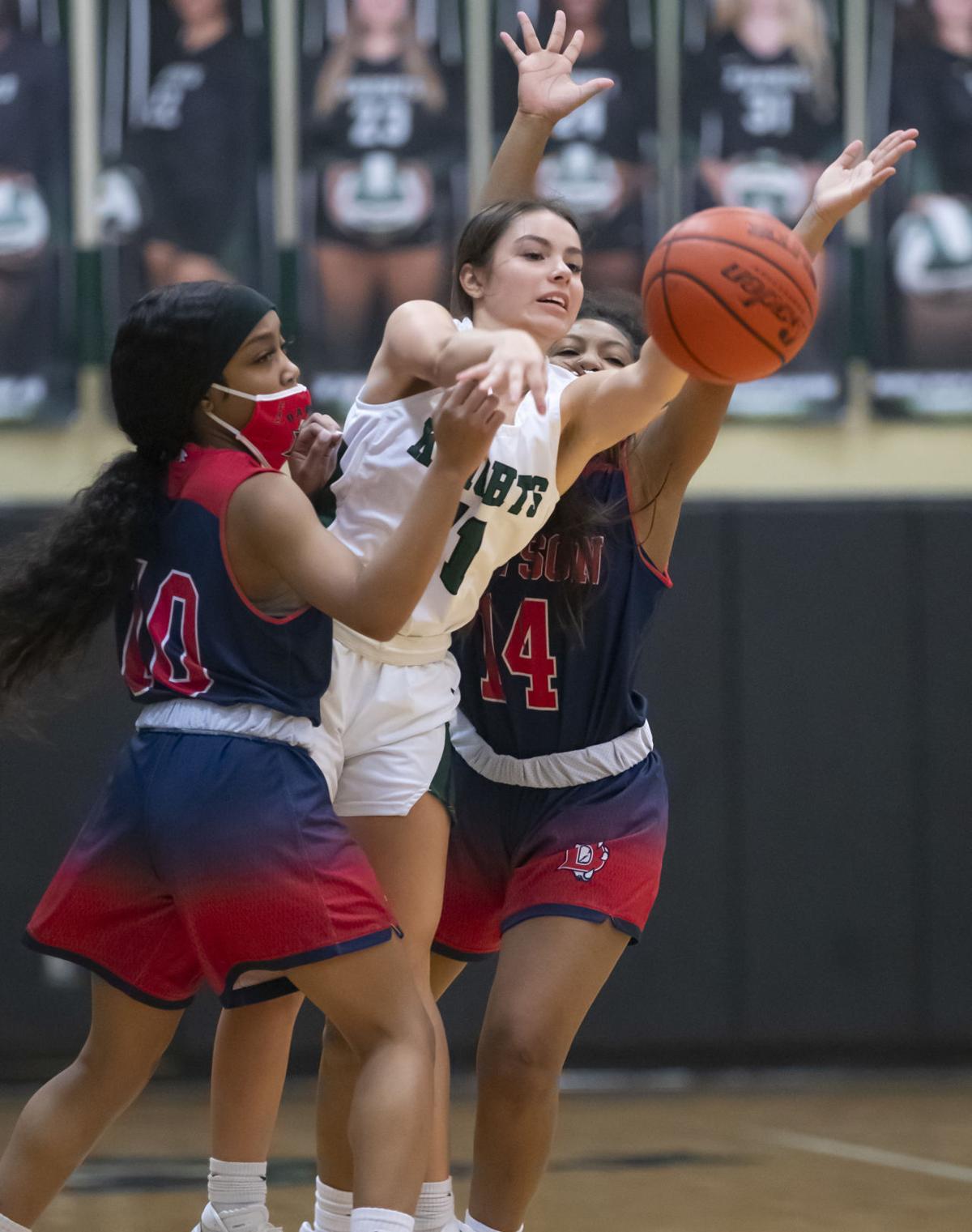 Clear Falls’ Apryl Llanes passes the ball while being swarmed by Dawson’s Sarolyn Charles and Jordan Riggs during the first quarter at Clear Falls High School in League City on Saturday, Nov. 14, 2020. 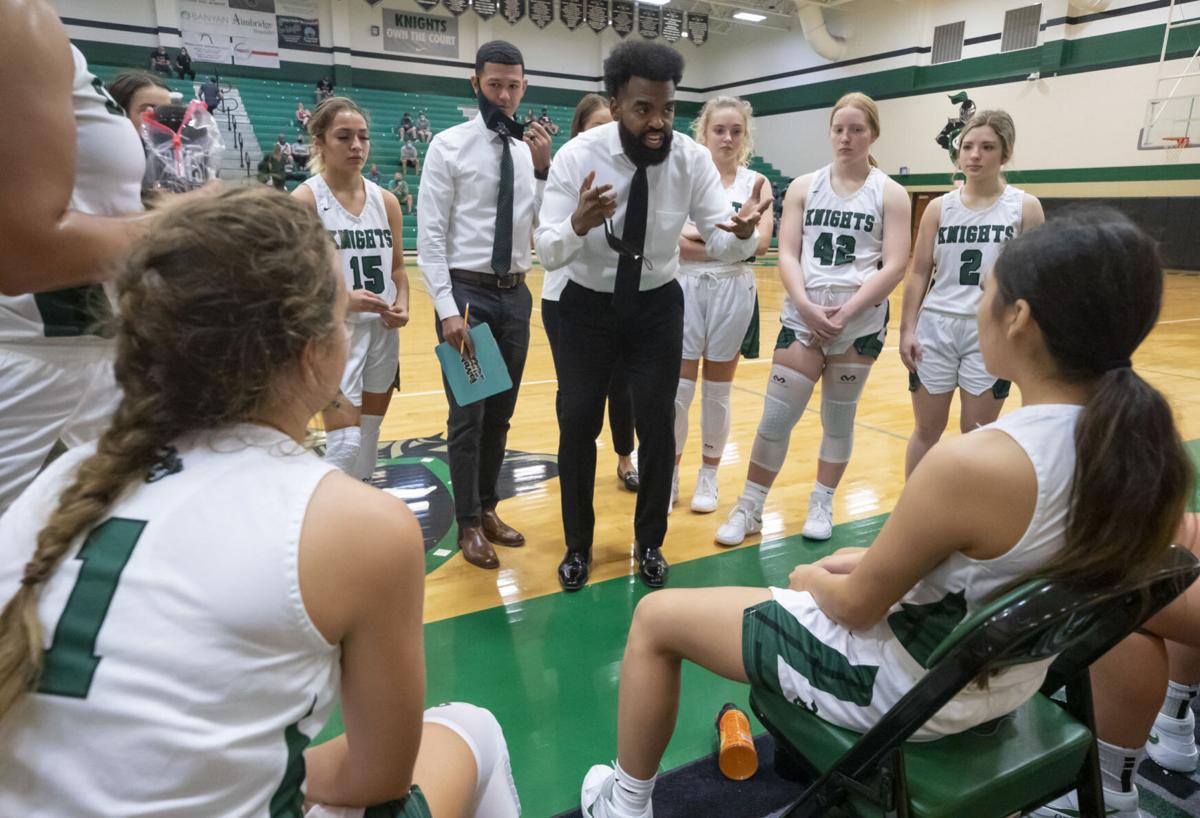 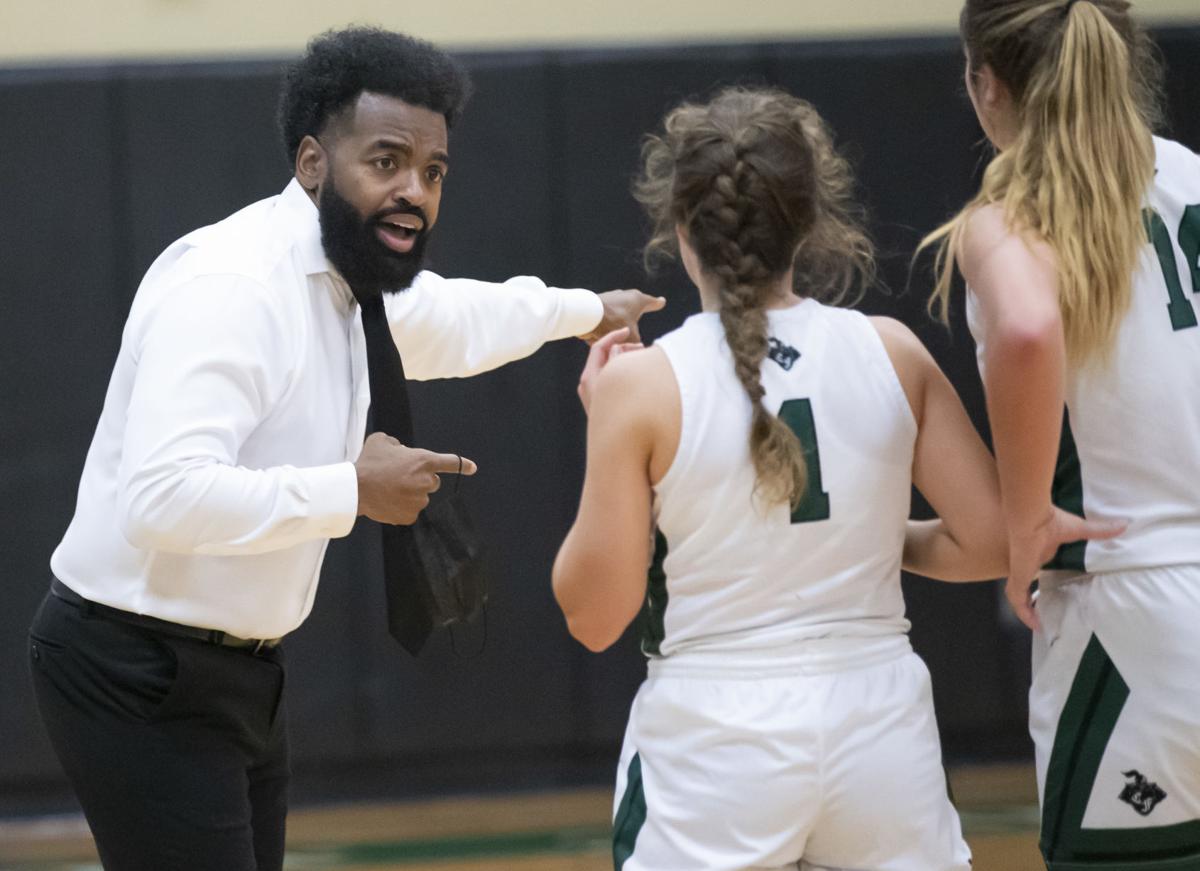 Clear Falls’ Giselle Arce and Dawson’s Sarah Allison fight for possession of the ball during the first quarter at Clear Falls High School in League City on Saturday, Nov. 14, 2020.

Clear Falls’ Lauren Rieke goes up for a shot during the first quarter against Dawson at Clear Falls High School in League City on Saturday, Nov. 14, 2020.

Clear Falls’ Apryl Llanes passes the ball while being swarmed by Dawson’s Sarolyn Charles and Jordan Riggs during the first quarter at Clear Falls High School in League City on Saturday, Nov. 14, 2020.

Guiding a Clear Falls girls basketball team short on experience, the Knights’ new head coach Orlandor Joseph said he is looking for his players to play hard consistently and put up a good fight every time they step onto the court.

In Saturday afternoon’s home game against the Pearland Dawson Lady Eagles, Joseph’s team did just that with an early scoring run giving Clear Falls an advantage it wouldn’t relinquish, as the Knights recorded a decisive 69-51 win.

“The consistent play and the consistent effort is a priority, and just being coachable,” Joseph said. “I felt like we did a good job of that. We’re still a little bit indisciplined defensively where we’re getting too many silly fouls and different things like that. So, I’ve got to clean up the defense a little bit.

“it was an all-around good day,” Joseph added.

Tied 5-5 midway through the first quarter, the Knights out-paced Dawson by a clip of 12-2 to build a 17-7 lead early in the second quarter. Junior guard Samora Watson, who scored the Knights’ first nine points of the game, was the key player of the run, scoring six points and assisting on another two during the pivotal scoring spurt.

With a 31-20 lead at halftime, Clear Falls’ offense ignited for a 25-point third quarter to nearly double the team’s halftime advantage.

Back-to-back 3-pointers late in the third quarter from senior forward Alexis Clayborne and Watson gave the Knights their largest lead of the game at 56-34, but Dawson’s Kennedy Ford hit a buzzer-beating 3-pointer to make the score 56-37 headed into the final period.

The Lady Eagles chipped Clear Falls’ lead down to 63-50 midway through the fourth quarter, but a slick drive to the hoop by freshman forward Grace Stum, a pair of made free throws from sophomore guard Giselle Arce and a mid-range jumper knocked down by Grace Lovegreen dashed any hopes of a late Dawson comeback.

Watson finished with a game-high 24 points and corralled nine rebounds, while Clayborne was not far behind with 19 points and eight rebounds. Sydney Maxwell, a 6-foot-1 junior post, recorded a double-double with 12 points and a game-best 14 rebounds.

Dawson was led by Ford, who finished with 16 points. Sarah Allison was the Lady Eagles’ leading rebounder with nine boards.

Up next for the Knights is another non-district game, as they face Pasadena Dobie at 7 p.m. Tuesday in a game that will take place at League City Intermediate School because of a conflict with the Clear Falls boys basketball team’s home game.

Before the game, there was a special tribute to former Clear Falls head girls basketball coach Shannon Osborne, who led the program from its inception in 2011 through last season and compiled an impressive win-loss record of 228-98 over the course of nearly a decade with the Knights. Clear Falls missed the playoffs only once in nine varsity seasons under Osborne.

With family, former players and coaching colleagues in attendance, Osborne was presented with a banner noting her Clear Falls career record and years of service, which will be hung in the rafters of the high school’s main gym.

Osborne said she decided in the offseason that it was a good time to step away from the program, and is now lending her coaching abilities to the Clear Falls girls golf team.

“It’s a good fit for coach Orlandor Joseph to come in and take over, and he’s done a great job,” Osborne said. “I look forward to him continuing on what I started, and, hopefully, even surpassing what we did here. He’s super-excited, he’s super-energized, and he’ll be good for Clear Falls.”