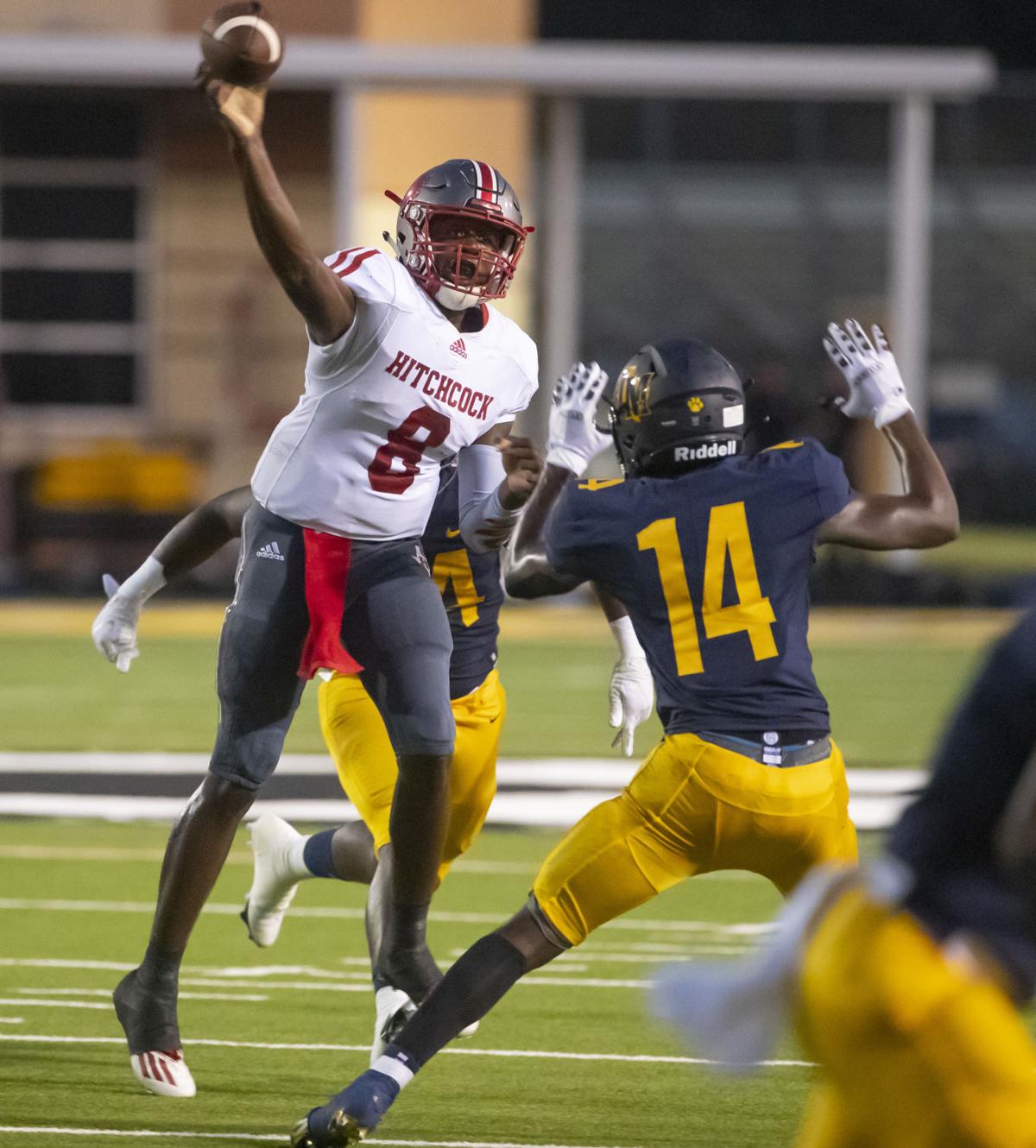 Hitchcock quarterback Christian Dorsey throws on the run during the second quarter against La Marque at Stingaree Stadium in Texas City on Friday, Sept. 11, 2020. 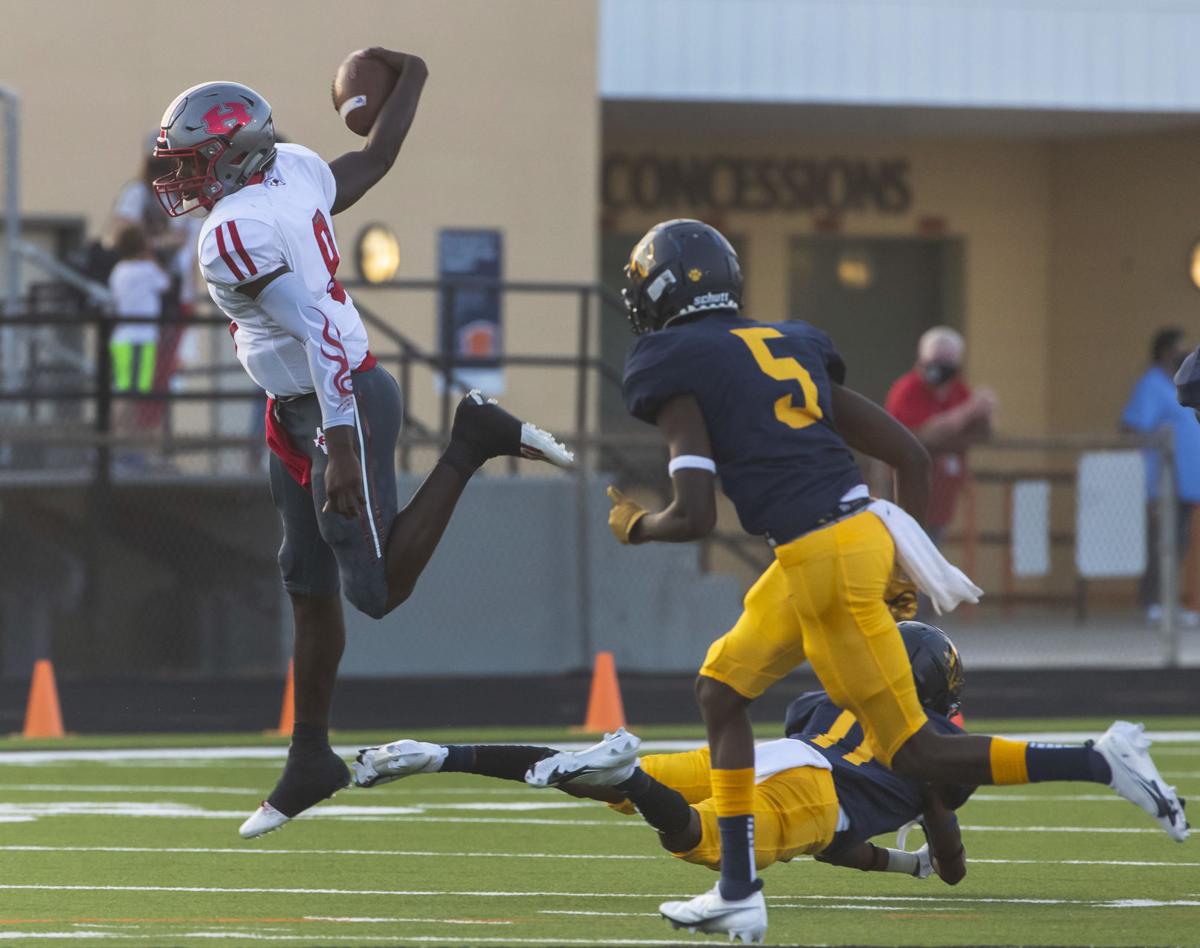 Hitchcock quarterback Christian Dorsey throws on the run during the second quarter against La Marque at Stingaree Stadium in Texas City on Friday, Sept. 11, 2020.

Hitchcock Bulldogs quarterback Christian Dorsey had a short memory in overtime Friday night, and as head football coach Craig Smith put it, he did what great players do.

After a lost fumble ended the first overtime period with the score still knotted, a huge third-down conversion and a 7-yard touchdown run by Dorsey helped clinch a 22-14 double-overtime win for the Bulldogs over the La Marque Cougars in their rivalry game at Stingaree Stadium.

“I knew I had messed up,” Dorsey said. “The whole time, I knew I just had to make up for it. At times like that, somebody’s got to step up, and I stepped up.”

Devin Preston sprinted around the left edge for the two-point conversion that put Hitchcock ahead for good, as the Bulldogs’ defense held firm on La Marque’s ensuing possession. The Cougars drove for a 34-yard field goal attempt in the first overtime period, but the try missed wide right.

“I’m proud of the kids for never giving up,” Smith said. “We practiced hard, and they want to put in the work. I’m really proud of them.”

Trailing 14-7 in the fourth quarter, a moment of ill advised youthful exuberance breathed new life into Cougars, as an excessive celebration penalty called on Hitchcock following a nice tackle for loss turned a third-and-long situation into a fresh set of downs and 15 yards of pay dirt for the Coogs.

Brandon Jones and Dabrion Nelson ripped off runs of 8 and 7 yards, respectively, before taking advantage of a busted coverage by the Bulldogs for a 33-yard TD pass from Armond Robinson to a wide-open Keanan Gatson to tie the game at 14-14 with 3:39 left in the game.

There was no shock to the methodical pace of this contest between the two smash-mouth football teams.

“It was a mental game; it was an old-school slugfest, very few passes thrown,” La Marque head football coach Shone Evans said. “It was man versus man, and I’ve got to do a better job of making us tough.”

Following a scoreless first quarter, La Marque drained the first 6:15 off the second-quarter clock, and a 7-yard touchdown run by Damarcus Nelson put the Cougars ahead, 7-0, to end a 54-yard scoring drive.

Hitchcock responded by marching 71 yards down field in 5:10. An 18-yard pass from Dorsey (16 carries, 138 rushing yards) to Chris Tipps put the Bulldogs inside the Cougars’ 5-yard line, and fullback JaMarcus Davis pounded in a 4-yard TD run. Dorsey’s keeper on the two-point conversion gave Hitchcock an 8-7 lead with 36 seconds remaining in the first half.

Korion McNeal recovered a La Marque fumble on the opening possession of the second half, and Hitchcock moved 71 yards on 10 plays — highlighted by a 27-yard run by Shemar Johnson and capped by a 1-yard plunge into the end zone by Dorsey.

A penalty pushed Hitchcock’s two-point try back 5 yards, and in what would be a key moment, La Marque’s defense stopped the conversion attempt to leave the score at 14-7 in the Bulldogs’ favor with 1:36 left in the third quarter.

“I’ve got to do a better job of getting the kids to play mentally tough; that was apparent (Friday night),” Evans said, adding that the team will need to work on starting games faster going forward.

• Hitchcock more than doubled La Marque’s output on the ground, rushing for 285 yards as a team compared to 122 total rushing yards for the Cougars. La Marque’s 72 passing yards were exactly double that of the Bulldogs’ 36.

• Both teams recorded 15 first downs in the game, and both totaled three fumbles with one lost fumble apiece.