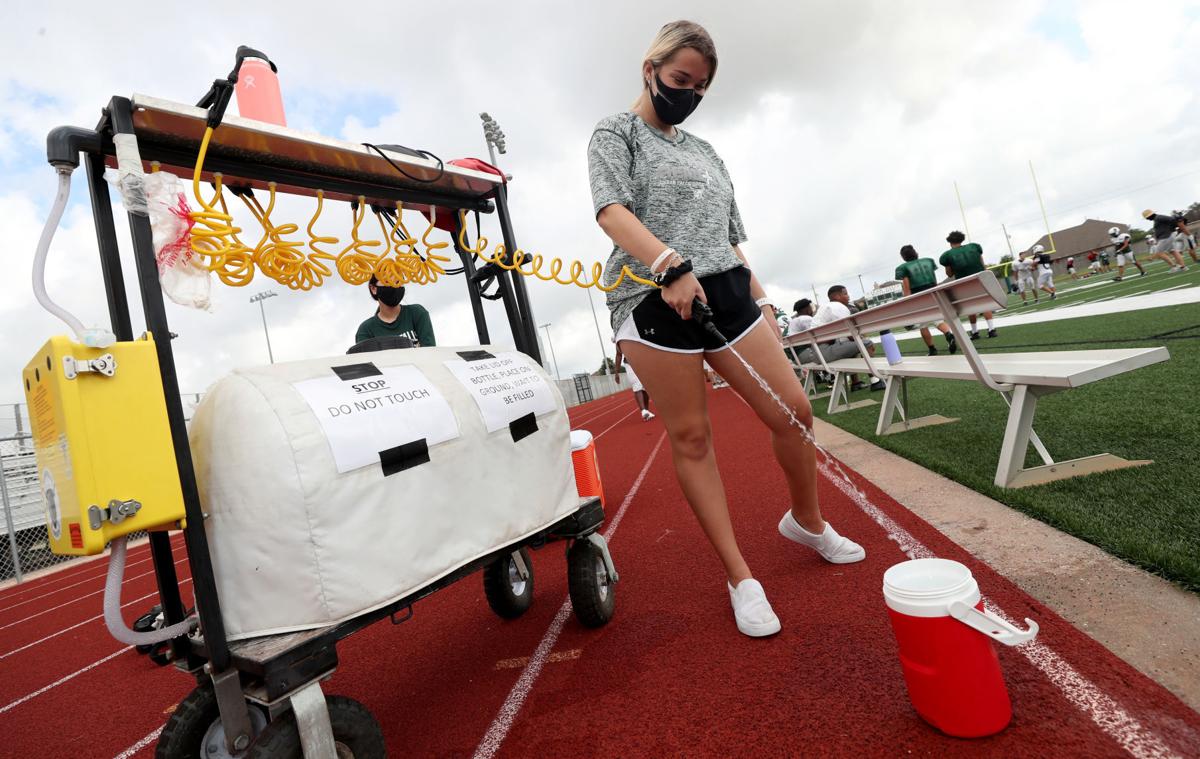 Chloe Murray, a student athletic trainer at Clear Falls High School, fills a water cooler for a football player during a break in practice at the school in League City on Monday, Oct. 12, 2020. Players and staff have to bring their own water bottles or coolers as part of the COVID-19 protocols. 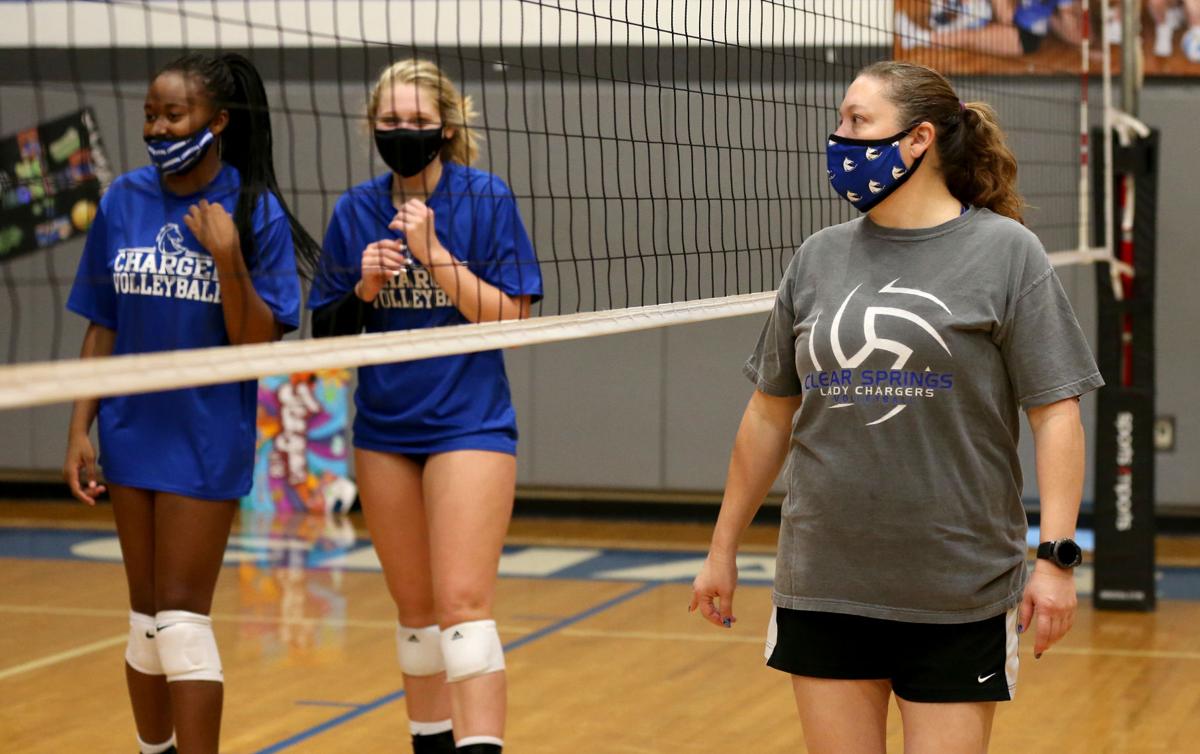 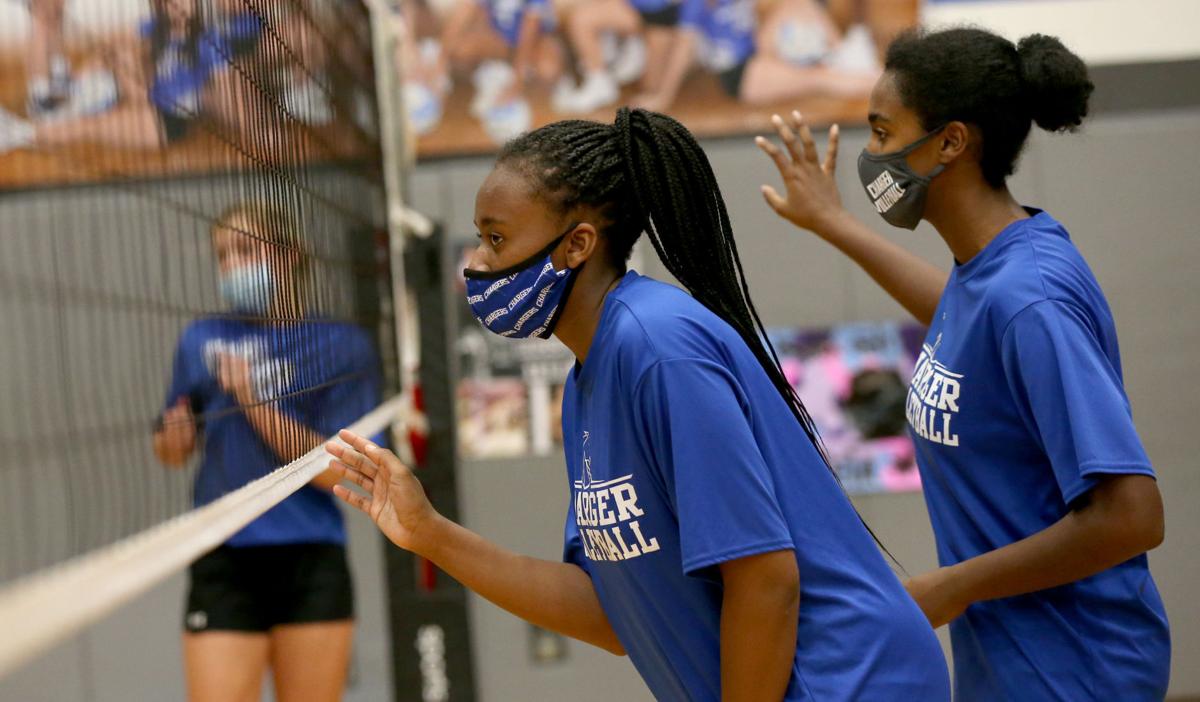 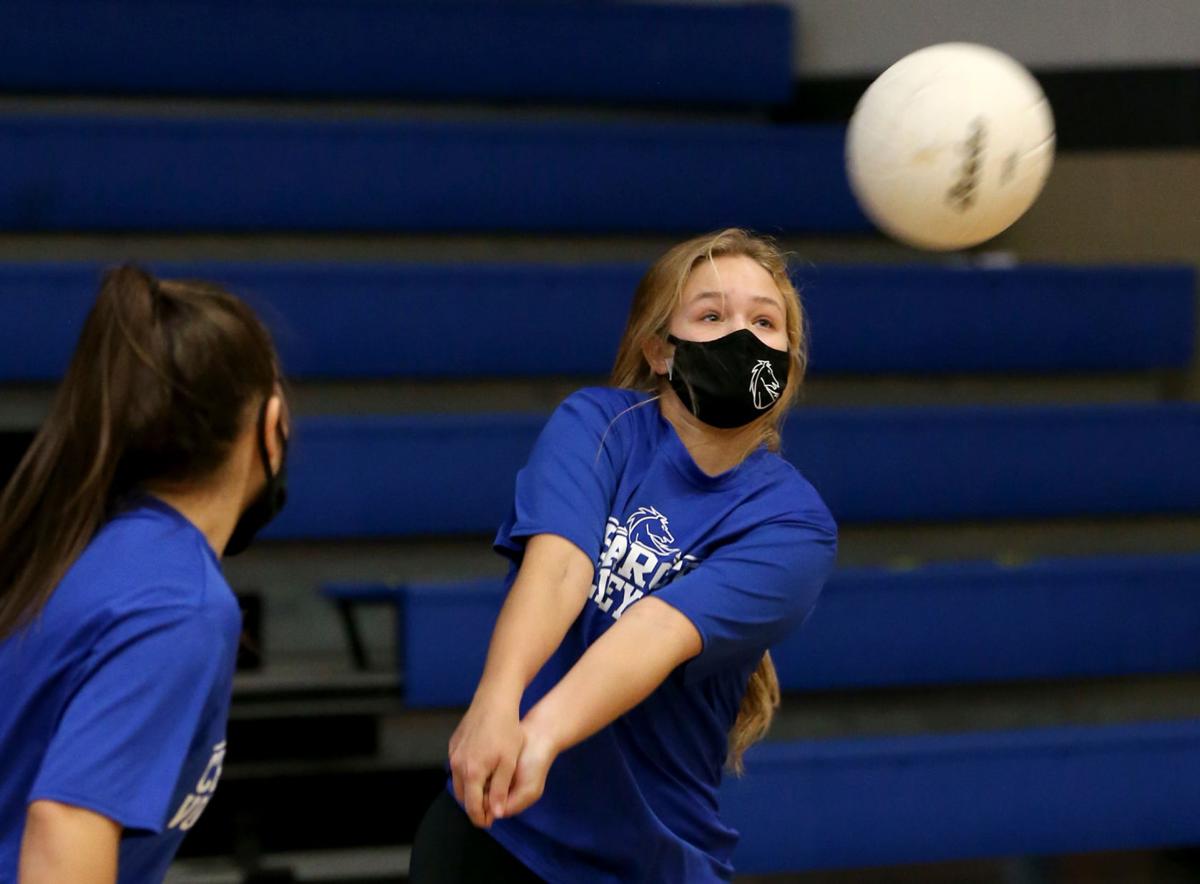 Miranda Mueck gets a dig during the Chargers’ practice at Clear Springs High School in League City on Monday, Oct. 12, 2020.

Chloe Murray, a student athletic trainer at Clear Falls High School, fills a water cooler for a football player during a break in practice at the school in League City on Monday, Oct. 12, 2020. Players and staff have to bring their own water bottles or coolers as part of the COVID-19 protocols.

Miranda Mueck gets a dig during the Chargers’ practice at Clear Springs High School in League City on Monday, Oct. 12, 2020.

Clear Springs High School senior Kendall Howard wants a volleyball season, even if it means sacrificing all the other memorable senior year moments.

“We’re all at home; we’re not doing anything at all,” Howard said. “It stinks for our senior year, but it’s so worth it to be able to play. A bunch of us skipped out on homecoming to make sure we could still have our season. I’d rather miss out on that than miss out on volleyball.”

Howard and her Chargers teammates already have experienced how quickly a positive COVID-19 case within the team can change the season, and it was a wakeup call for the team, she said.

After Clear Springs’ Sept. 19 match at Houston Stratford, a player tested positive for the coronavirus after being infected off-campus and went into the standard two-week quarantine. Six other players, including Howard, who had been in close contact with her all tested negative but went into quarantine as a precaution.

“Watching the live streams made me sad, wanting to be there, waiting for your name to be called in the lineup and they just skip over your number,” Clear Springs senior volleyball player Teagan Weber, another one of the six players quarantined out of precaution, said. “It was really exciting to get back to practice and get back into the swing of things.”

High school sports teams have been following all the guidelines recommended to slow the spread of COVID-19 since summer strength and conditioning camps began in June, Chargers head volleyball coach Shannon McClellen said.

But the positive case for Clear Springs caused the players to be even more serious than before when it comes to wearing face coverings properly and sanitization, McClellen said.

Last week, the high school football schedule for Galveston County teams was shaken up when three positive COVID-19 cases on Dickinson’s team forced the entire varsity and junior varsity groups to go into quarantine for two weeks, postponing the Gators’ Oct. 9 game against Clear Falls and this Friday’s game against Clear Creek.

“It is a little strange because you prepare for someone all week, and you find out the day before that you’re not going to play them,” Clear Falls head football coach Zach Head said. “But, we adjusted pretty quick and started preparing for Clear Brook.

“That’s part of the challenge of this year. Mentally, we have to be prepared to adjust at any moment’s notice,” he said. “We’ve talked about that a lot with our players since back in June when we got to work out with them again.”

Dickinson’s team did nothing wrong when it came to COVID-19 prevention measures, but some things are simply out of the control of coaches, Head said.

“We see these kids for two to three hours a day for, at most, six days a week,” Head said. “With what’s going on with their lives outside of here, we hope they’re being smart, practicing the guidelines. But, in the world we live in, it’s inevitable that things are going to come up. We just always have to be ready to adapt and respond accordingly.”

Although the Ball High volleyball team has yet to experience a positive COVID-19 case, the team’s non-district home match Tuesday against Port Neches-Groves was canceled because that team needed to make up a coronavirus-related match postponement in its district.

“It just has a ripple effect. No matter what you do to keep your players safe, you’re still relying on other teams and their players, as well.”

District 24-6A — which includes teams from Clear Brook, Clear Creek, Clear Falls, Clear Lake, Clear Springs, Dickinson and Brazoswood high schools — built into its schedule dates at the end of the season where games could be made up, and the schools agreed that if a team has 25 percent or more of its players in quarantine, they would be allowed to postpone games.

Ball High’s volleyball district — which it shares with teams from Friendswood, Santa Fe, Texas City, Manvel, Goose Creek Memorial, Baytown Sterling, Baytown Lee and La Porte high schools — scheduled non-district games throughout the season that could be dropped if district games needed to be made up.

“It’s just the world we’re in right now,” Head said. “We’ve had plans for this; that’s why we altered our district schedule and left that wiggle room at the end for makeup games.”

However, the postponements and cancellations of games can be disruptive to a team’s routine, Profitt said.

“The girls get on a schedule of games every Tuesday, Friday and Saturday, and whenever that gets disrupted, it throws off your practice schedule, and you lose a little bit of momentum,” Profitt said. “But, the girls are resilient and they’ll keep going.”