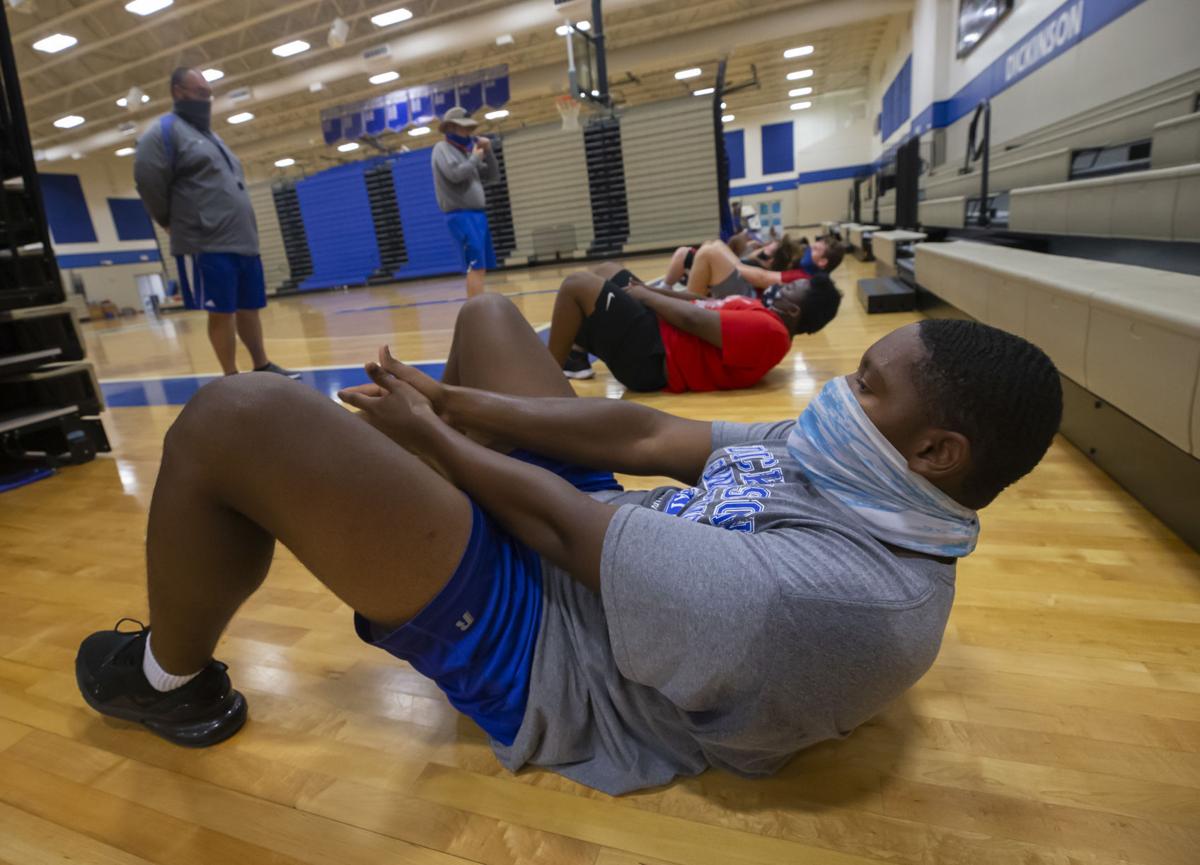 Dickinson High School football player Michael Barnett and his teammates do sit-ups during a morning workout at the school in Dickinson on Friday, July 17, 2020. 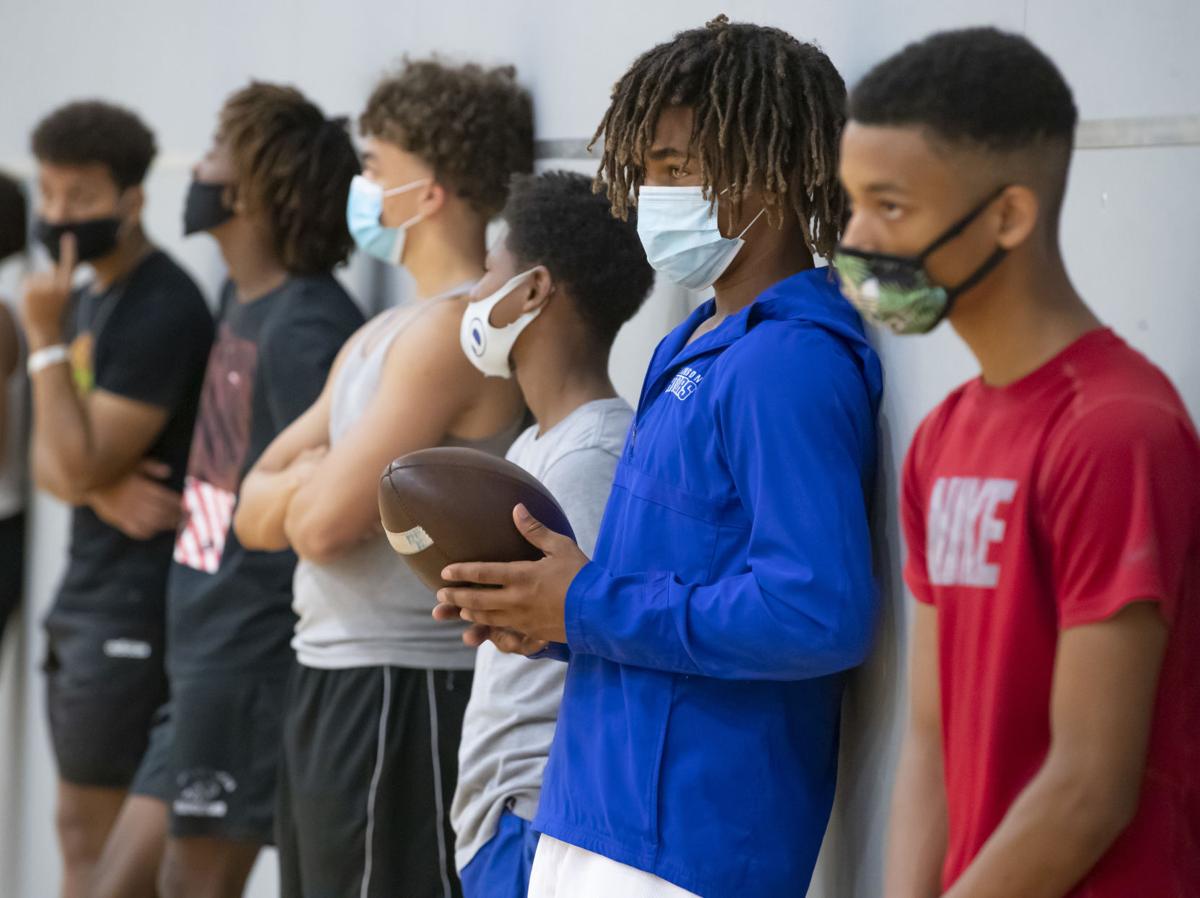 Dickinson High School football player Braedon Stafford, stands, with his teammates between drills during a morning workout at the school in Dickinson on Friday, July 17, 2020. 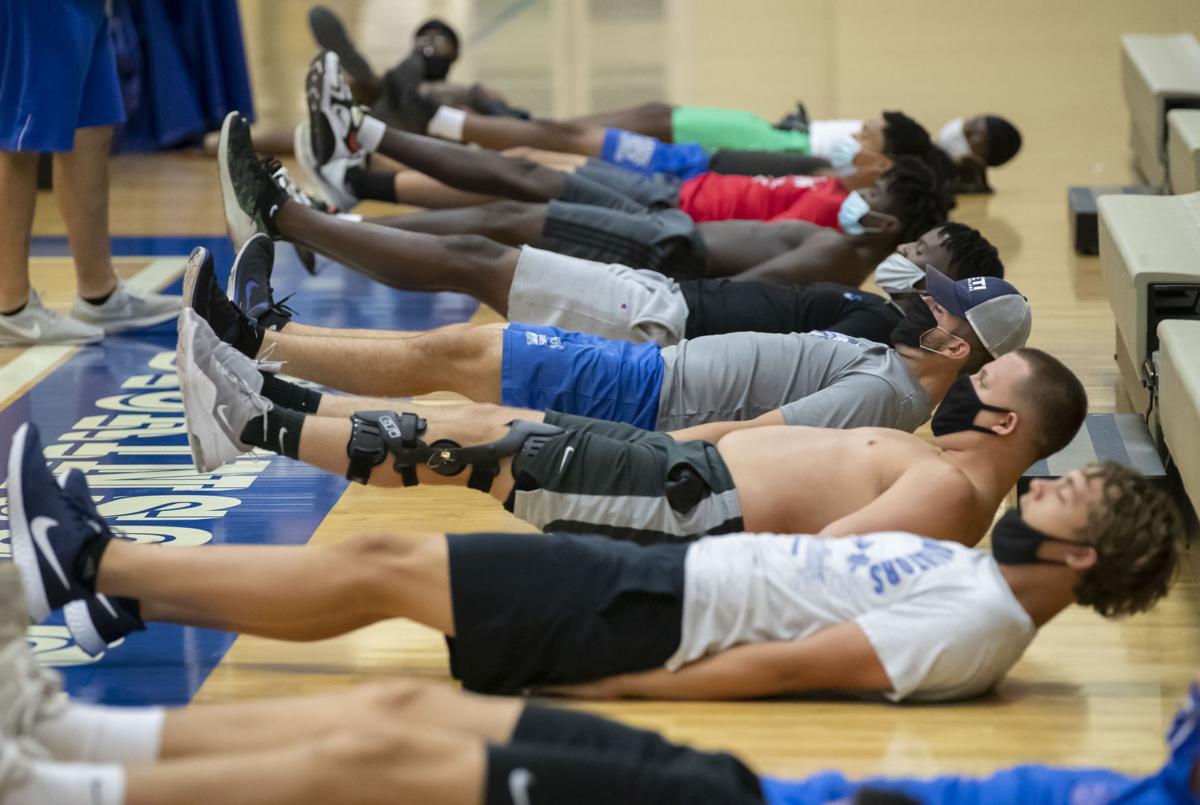 Dickinson High School football players do conditioning exercises during a morning workout at the school in Dickinson on Friday, July 17, 2020.

Dickinson High School football player Michael Barnett and his teammates do sit-ups during a morning workout at the school in Dickinson on Friday, July 17, 2020.

Dickinson High School football player Braedon Stafford, stands, with his teammates between drills during a morning workout at the school in Dickinson on Friday, July 17, 2020.

Dickinson High School football players do conditioning exercises during a morning workout at the school in Dickinson on Friday, July 17, 2020.

As the world endures an unusual and trying moment in history with the ongoing COVID-19 pandemic, Dickinson High School student-athletes are among the many back at summer strength and conditioning camp with positive attitudes and enthusiasm.

“I think kids are way more resilient than adults are, to be honest with you,” Dickinson head football coach John Snelson said. “I think adults worry and fret a lot more than kids do. Kids do a better job of just rolling with the punches.”

But, these student-athletes also are aware that the future of their season and the beginning of their school year is far from certain. Dickinson’s current crop of players, after all, witnessed some of their peers’ senior seasons come to an abrupt end this past spring.

Dickinson, like many other area schools, started their summer camp back up last week after a two-week hiatus. One of those weeks was taken off out of precaution because of the coronavirus, while the second week was an already scheduled holiday week.

“The numbers have been really good,” Snelson said. “There are a couple parents who just want to see how things go before they send them back, but we’re all masked up and following our same protocols and are having a good time. It’s just good to get back on the grass, get around the kids and feel like you’re being useful.”

In having schools return to strength and conditioning workouts, the University Interscholastic League updated its protocols for operating the camps. One of the most major changes were the allowance of drills pitting one or more student-athlete on offense against one or more on defense.

“We mask up when we’re doing that, and everyone washes their hands when they’re finished doing that, and so far, so good,” Snelson said. “It’s really been nice to add the competition component to the summer program. The other stuff had gotten kind of monotonous.”

Dickinson, like all area schools, continued the protocols that were previously in place at the start of its summer strength and conditioning camp, such as daily symptom screenings and temperature checks, frequent sanitation of equipment and student-athletes bringing their own water and towels. Despite the stringent requirements, competitiveness has driven players throughout summer camp, Snelson said.

“It’s just a breath of fresh air to get around all their buddies, get in the stadium, get around their coaches, do some actual football drills, learning,” Snelson said. “We have tons of competition and tons of wide-open positions. The kids understand that and are showing up and are learning and are being coachable. Knowing what to do is a big, big part of it.”

And despite an unclear future, the Gators camp has been full of positive vibes and motivation to be prepared for a season that may or may not come.

“It’s early in the morning, so they’re sluggish at first, but once they get out here, they’re having a good time,” Snelson said. “They’re just all asking, ‘Coach, are we going to get to play?’ I just tell them, ‘Guys, we have no idea, but we have to prepare like Aug. 3 is the very first day of practice.’ We missed all of March and April during the athletic period. We missed all of spring football, so 18 practices. So, we’ve got to catch up, and do that while being as safe as we can.”