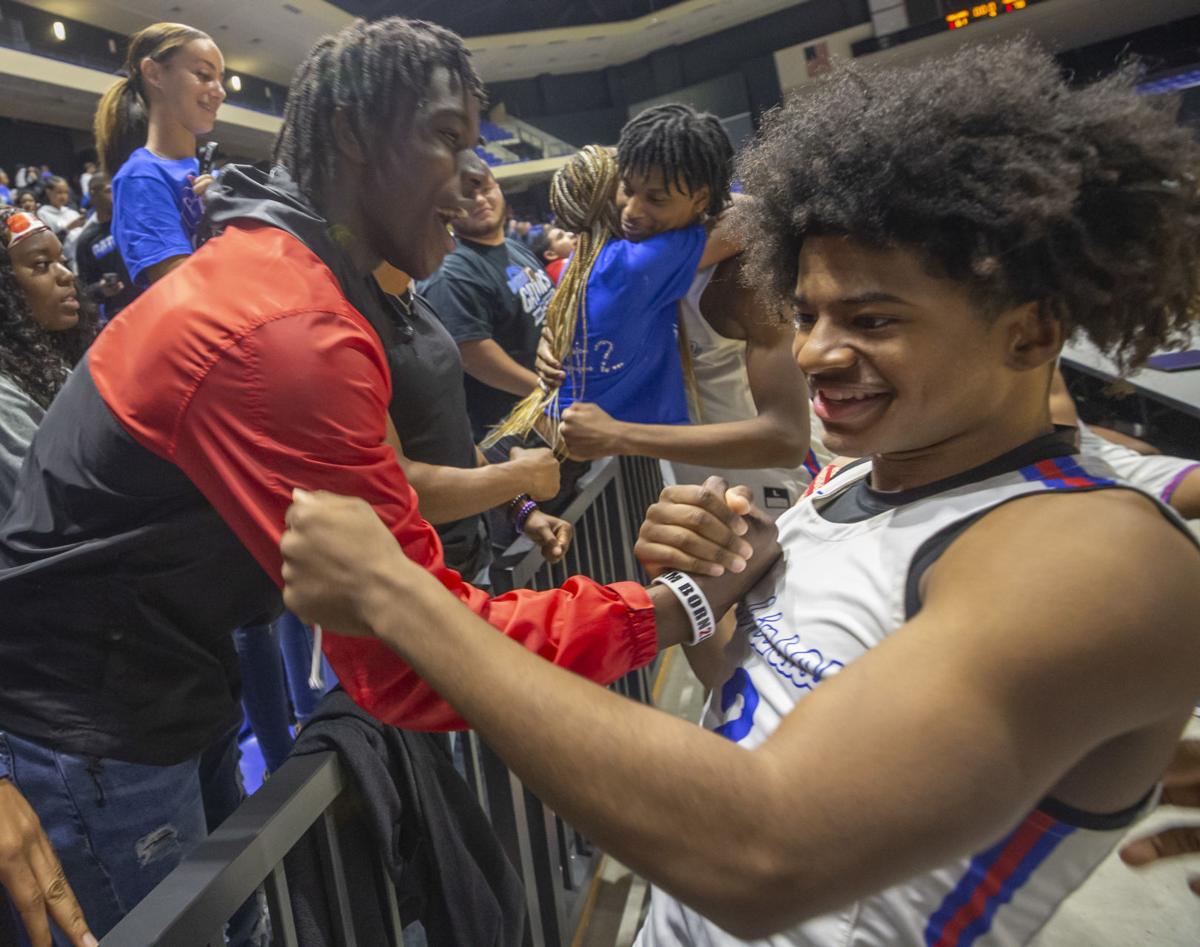 Dickinson’s Deuce Guidry, right, and Tramon Mark are congratulated by classmates after they and the rest of the Gators boys basketball team won the Region III-6A Championship by defeating Bellaire 70-61 at the Berry Center in Cypress on Saturday, March 7, 2020. The Gators will advance to the state tournament in San Antonio. 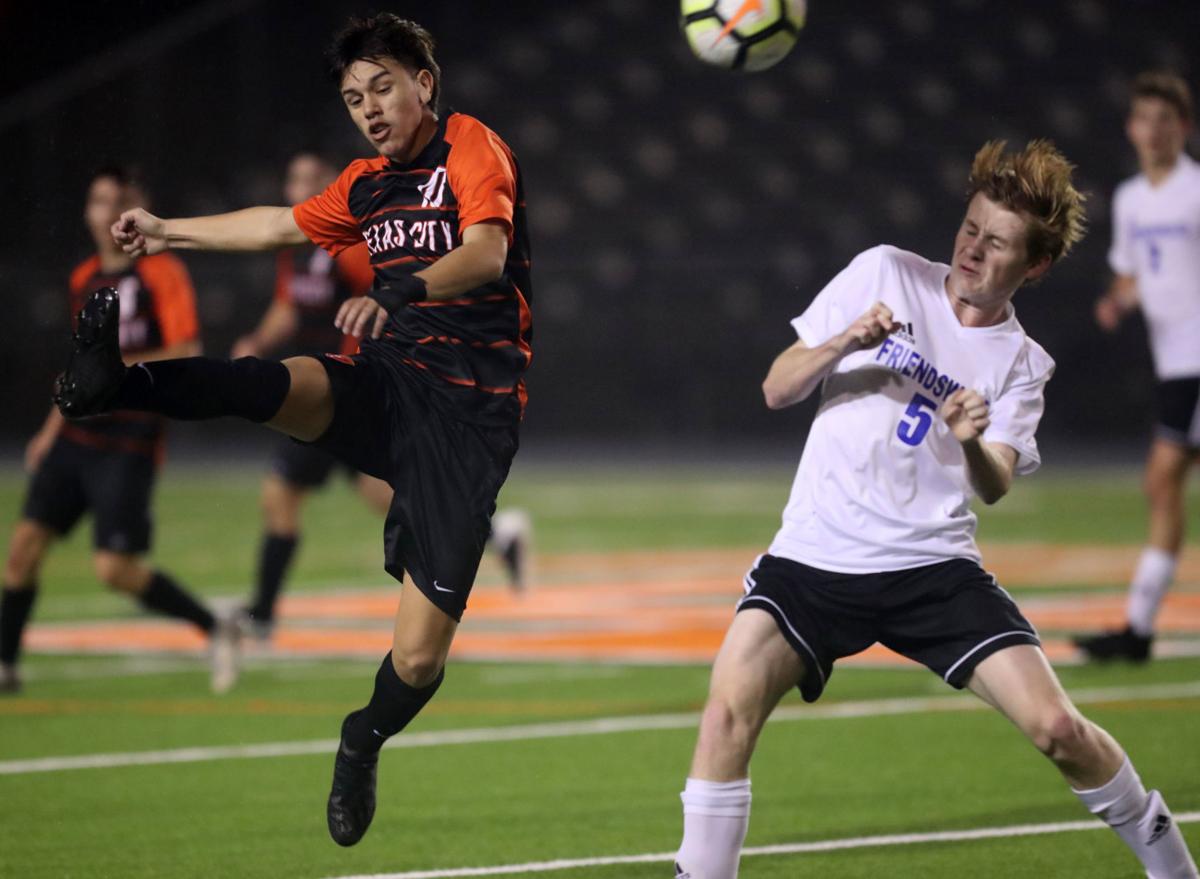 Dickinson’s Deuce Guidry, right, and Tramon Mark are congratulated by classmates after they and the rest of the Gators boys basketball team won the Region III-6A Championship by defeating Bellaire 70-61 at the Berry Center in Cypress on Saturday, March 7, 2020. The Gators will advance to the state tournament in San Antonio.

District play was set to begin next week. Then, Kunefke watched as the sports world — from professional leagues to college athletics down to the high school ranks — suddenly screeched to a halt.

“We all kind knew that this may be happening, and I’m sitting there with a pro scout, and immediately he says, ‘Hey, spring training just got canceled, and they pushed the season back two weeks,’” Kunefke said. “March Madness got canceled in a matter of 30 minutes, and then they pulled Galena Park off the field against Dickinson. And then CCISD cancels, and now we’re sitting in limbo.”

On Friday, the University Interscholastic League extended a suspension on competition to March 29 for high school sports teams that were originally scheduled to return from spring break and resume play next week.

“I certainly didn’t see the Houston rodeo being shut down, I didn’t see the NBA postponing, and then when the NCAA shuts down the whole tournament, those are big steps,” Friendswood athletic director Robert Koopmann said. “I think we’re in unchartered territory, and I don’t know where we’re headed. Optimistically, I’d like it to be just the two weeks, but I’m not sure.

“We’re just taking it — I don’t want to even say day-to-day — hour-by-hour,” Koopmann added. “There’s just new information coming out all the time.”

“It’s just strange,” Ball High head baseball coach Russell Ferrell said. “Nobody knows what to do, and everybody is just waiting to see. I don’t think any of us coaches want to do anything to put the kids at risk or do anything against what the UIL is telling us to do. We’ll just be smart about it.”

Most notably, the UIL’s suspension of play put a stop to the state boys basketball tournament before Dickinson, which reached state for the first time since 1955, got a chance to play its Class 6A semifinal game against Wylie, originally scheduled for 8:30 p.m. Friday at the Alamodome.

“They had to get on the bus and come home,” Dickinson athletic director John Snelson said. “They were very disappointed, and the coaches were, too. But, hopefully, this is just a postponement and not a cancellation.

“When we were up there in San Antonio, I said, ‘You know what guys, no matter what happens here, they’re going to find a way to get this played if at all possible, but just know that all of the work and the effort you have done, you guys have just made our community and our district so, so very proud’” Snelson added.

The UIL’s decision was tough, but the governing body of public high school sports did well to air on the side of safety, Snelson said.

“High school sports are very important,” Snelson said. “It gives the community pride, it teaches our young men and women valuable life lessons, but people’s livelihoods are a whole lot more important, at the end of the day. They’re going to find a solution, and we’ll get it worked out. I’ve got faith in that. It may not be the perfect solution, but there’s nothing perfect in this world.”

Koopmann urged his coaches who are seeing their seasons put on hold to not stress too much because the decision is out of their hands, he said.

“I think they’re all handling it well,” Koopmann said. “They’re disappointed because they’re competitors. And if you lose anything, you just feel for the seniors because they put a lot of work into it, and they can’t get that back.”

Other decisions made Friday that affected local teams were the Texas Association of Private and Parochial Schools suspending activities until April 12, and Galveston College postponing athletic events until after April 3.

“We’re going to be missing out on some district ball games, so we’ll have to do some rescheduling,” O’Connell athletic director Derek Martin said. “Our playoff schedules will have to be adjusted, as will, possibly, the state tournament schedules, but that would all be looked at by TAPPS.”

Also Friday, the NCAA opted to bar scouts from traveling to make on-campus visits to high school prospects, as well as conducting any in-person recruiting, until April 15.

“We don’t really see a lot of college coaches coming onto our campus until April because they’re going through spring football practices, but it is pretty common for them to have high school kids come up for junior days or unofficial visits,” Snelson said. “So, that’s a definite hit in the recruiting realm.”

While Galveston County teams are in wait-and-see mode, many of the teams’ coaches are trying to put a positive outlook on a less than ideal situation, like Kunefke, whose Wildcats had been struggling prior to this interruption to their season.

“Hopefully, this break will help us, and I hope it is just a break,” Kunefke said. “This may help us mentally and physically be ready to go.”