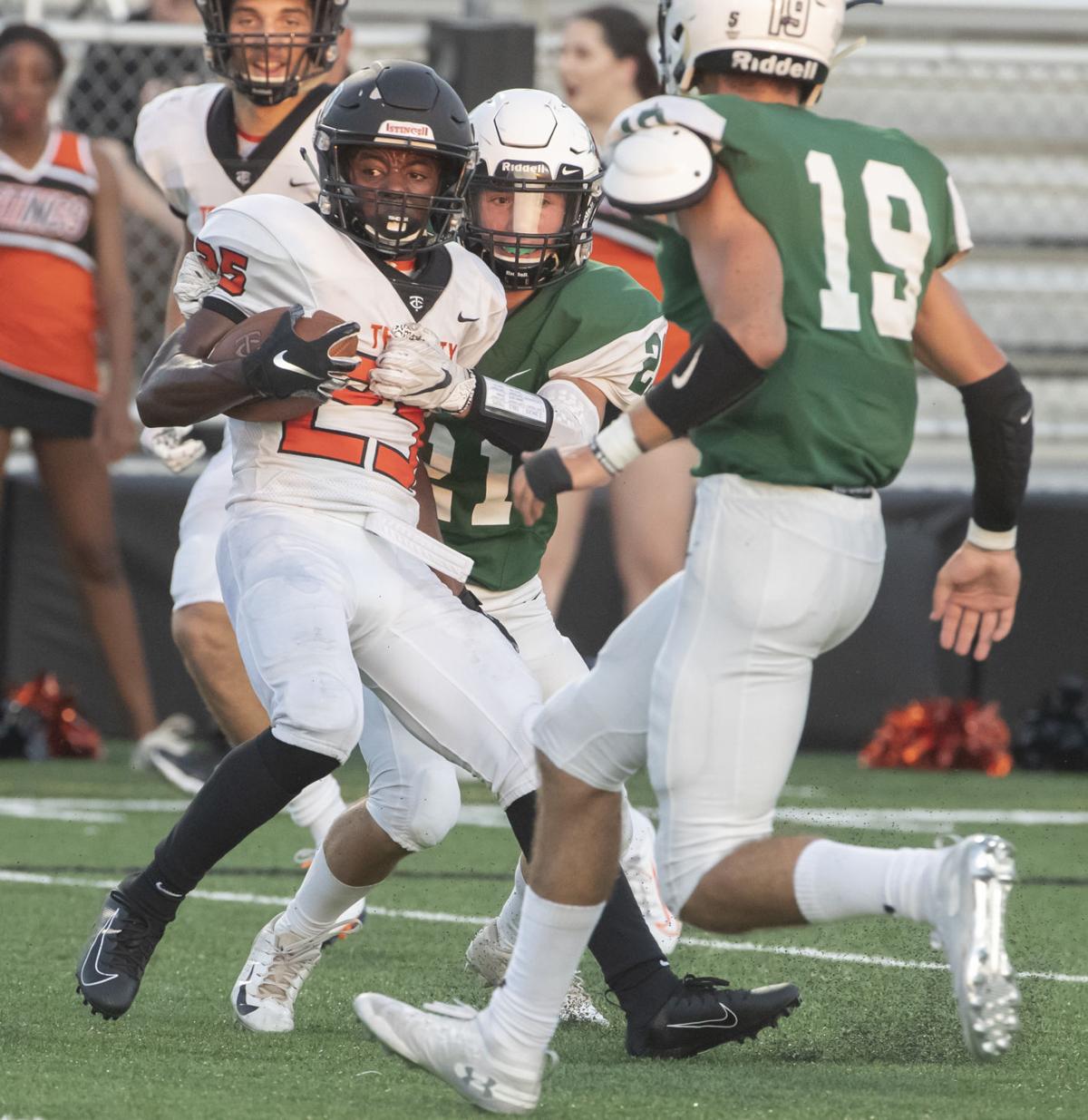 Texas City’s Corday Williams spins past Clear Falls defenders on his way to the end zone for a first quarter touchdown at Veterans Memorial Stadium in League City on Friday, Sept. 6, 2019. 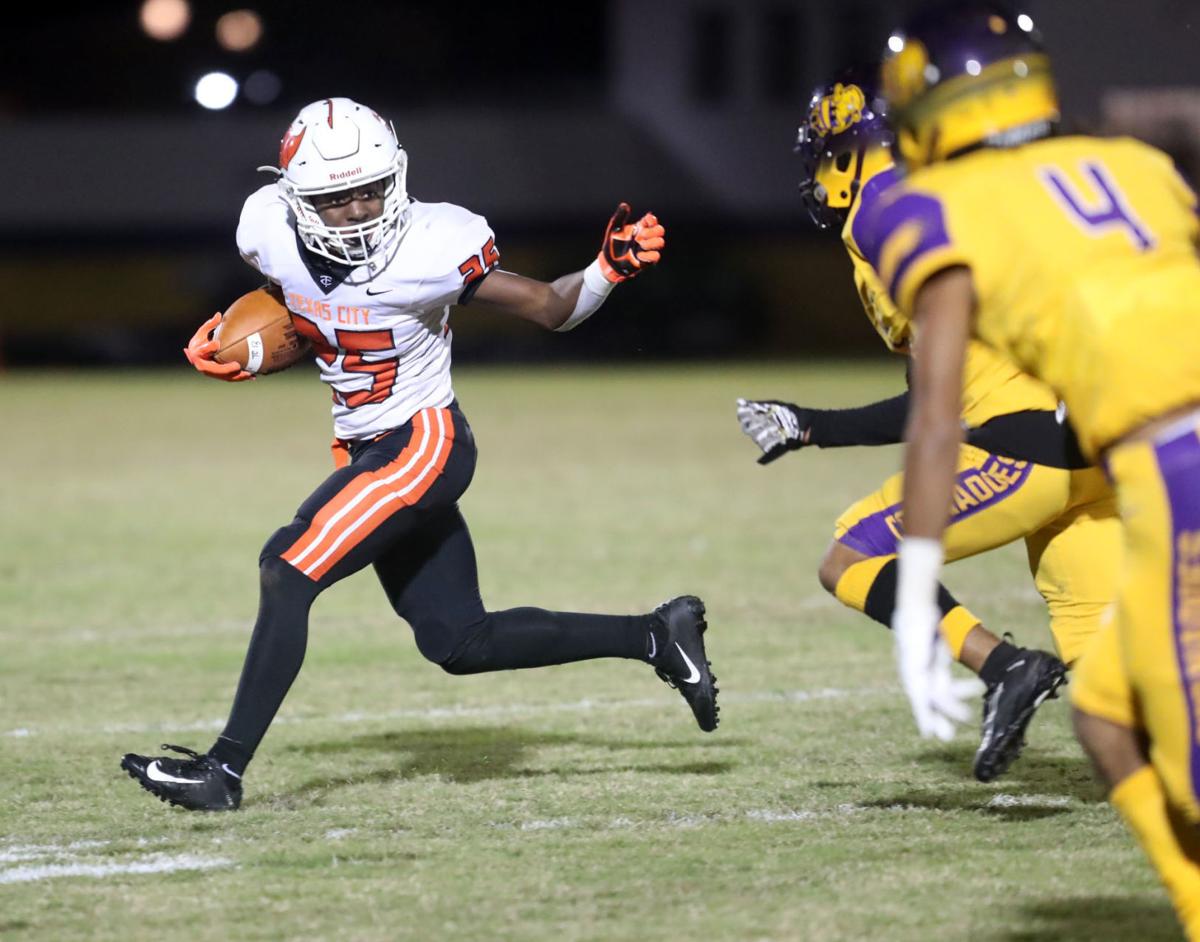 Texas City's Corday Williams runs away from Ball High defense during the second quarter of a game at Kermit Courville Stadium in Galveston on Friday, Nov. 8, 2019.

Texas City’s Corday Williams spins past Clear Falls defenders on his way to the end zone for a first quarter touchdown at Veterans Memorial Stadium in League City on Friday, Sept. 6, 2019.

Texas City's Corday Williams runs away from Ball High defense during the second quarter of a game at Kermit Courville Stadium in Galveston on Friday, Nov. 8, 2019.

Texas City High School alumnus Corday Williams is being remembered as a talented athlete and an intelligent motivator with great ambitions before a rare brain disorder brought about an accident that ended his life at age 18.

“He was a very, very good kid,” mother Rachelle Williams said. “He didn’t ask for much. It didn’t take much to make him happy. He never wanted to put too much on me.”

Corday Williams was a four-year varsity football player at Texas City High School where — lined up at defensive back, running back and punt returner — he earned all-district and academic all-state honors, and he also starred in sprints and relays on the Stings’ track and field team. He also spoke out against bullying in a television news feature.

“He was very intelligent, he was self-motivated, he was a team leader, and he led by example,” Texas City head football coach Leland Surovik said. “When he spoke, everybody listened because he had great things to say when he did speak.

“He had a sense of pride about him and pride in our school,” Surovik added. “He was a very dedicated Christian man and was a great player, too. He gave it his all and made every ounce of his body count. He did everything right as you should, and he went above and beyond to be a leader and role model for every kid.”

A consistent honor roll student, Corday Williams also helped lead Texas City’s business and marketing team to a state championship and a third-place finish at nationals in the entrepreneurship category, and he helped the group create their own viral video.

“Corday was the epitome of someone who was going to live the American dream,” said Terri Jacobs, his business and marketing teacher at Texas City High School. “He already talked constantly about becoming an entrepreneur.”

Corday Williams — who moved to Texas City from Emmitsburg, Maryland, when he was in middle school — enjoyed watching motivational videos, boxing, reading, rooting for the Baltimore Ravens, and he learned how to cook and learned loyalty from his father, Clyde Williams.

The achievements on the gridiron and in the classroom earned Corday Williams athletic and academic scholarships to Southern Nazarene University in Bethany, Oklahoma.

Then in January, a life with seemingly limitless potential took a turn.

Rachelle Williams began noticing changes in her son during a Jan. 12 dinner with family and friends.

“Corday is just talking and I’m listening to him and everything; the conversation was good, but I just knew something was going on,” Rachelle Williams said. “A mother knows when something is going on.”

“As I’m sitting there, I called his dad, and he said they had a weird conversation,” Rachelle Williams said. “He didn’t even recognize his dad’s voice.”

A doctor’s visit determined Corday Williams had autoimmune encephalitis, which is a set of conditions that happen when a body’s immune system mistakenly attacks healthy brain cells. Confusion and changes in behavior are among the symptoms.

Corday Williams started returning to his old self after his diagnosis and treatment, and he only had to miss the first week of the new semester of college, his mother said.

On Jan. 25 in what would be the final time they spoke, he called Jacobs for advice about starting a sports podcast and a business blog, and there were no signs anything was wrong with him, Jacobs said.

Soon after, though, his behavior again changed.

“I heard something else in his voice, and I knew once again that something was going on with Corday,” Rachelle Williams said.

Granted a medical leave from school, Corday Williams’ parents drove to pick him up from college and return home for another doctor’s appointment. At an apartment across the street from the Southern Nazarene campus, Corday Williams was restless and couldn’t sleep.

“We were getting some rest, and I get up and he’s not in the room — he’s outside on the balcony walking up and down, like pacing,” Rachelle Williams said.

Later, Corday Williams, in a confused state, slipped out of the apartment without his identification or his phone, and his parents filed a missing person report.

Alerts and pictures were sent out. Eventually, Rachelle Williams received a phone call informing her that her son was involved in an auto-pedestrian accident.

The injuries Corday Williams suffered in the Feb. 4 accident were severe, and on Feb. 6, he was pronounced dead.

“Corday never made it back home,” Rachelle Williams said.

Corday Williams’ favorite line of scripture in the Bible reads as follows: “‘For I know the plans I have for you,’ declares the Lord, “plans to prosper you and not to harm you, plans to give you hope and a future.’”

“God had a lot of plans for him,” Rachelle Williams said. “His scripture really matched his spirit.”

Jacobs believed he would change the world as an entrepreneur and activist.

“I knew he was going to be very successful because he never saw an obstacle that he couldn’t go after,” Jacobs said.

The last time Texas City defensive coordinator Blake Ryder spoke with Corday Williams was after the Stings’ Dec. 4 football game at Barbers Hill High School. They discussed him wanting to become a coach, so he could have the kind of positive influence on young athletes that Ryder had on him.

“I’m still saying quotes that he said to myself and to the team, so in my opinion, he is coaching right now,” Ryder said. “He’s coaching me just as much as I coached him.”

Corday Williams had already accomplished much in his too-short life, but perhaps his lasting legacy is the effect he had on multiple people’s lives.

His infancy helped Rachelle Williams gain access to a program that helped her achieve sobriety, she said.

“I’m 17 years clean and sober, and I would not be clean and sober if it were not for Corday,” Rachelle Williams said. “He was the ticket for me to get into this program. ... Me and his oldest brother say, ‘Boy, we don’t know where we would be if it weren’t for you.’”

As an organ donor, Corday Williams’ untimely death saved the lives of four people who received transplants from him, his mother said.

He also leaves behind a journal filled with motivational quotes he kept. On those pages are phrases that have had a profound effect on those with whom he was closest and beyond.

“Work hard, stay focused, and keep your eyes on the prize” was Delao’s favorite quote. His best friend from Maryland Eli Frei liked the quote, “Be consistent in everything you do,” while Radzieski was inspired by the quote, “Anything you want in life is already yours, you just have to put in the effort.”

“The one I love is the one that says, ‘The hearts of my enemies are in the hands of my creator, so I am well,’” Rachelle Williams said.

“The way it related to football is if you’re a guy who’s afraid to buy in, and you just show up here and there, what are you afraid of? Why are you afraid to commit to the team? And the guys who are here every day, those are the guys who you build relationships with,” Ryder said. “I use that quote all the time. Kids will be standing in line, and I’ll start it, and they’ll finish it.”

Near the weight room at Texas City High School, the athletic program has Corday Williams’ football jersey in a glass case to honor and remember him, Surovik said.

There also will be a bench built at Walker Park in Texas City in remembrance of him, Rachelle Williams said.

In addition to his parents, friends, teachers and coaches, Corday Williams is survived by two brothers and four sisters, as well as several extended family members.