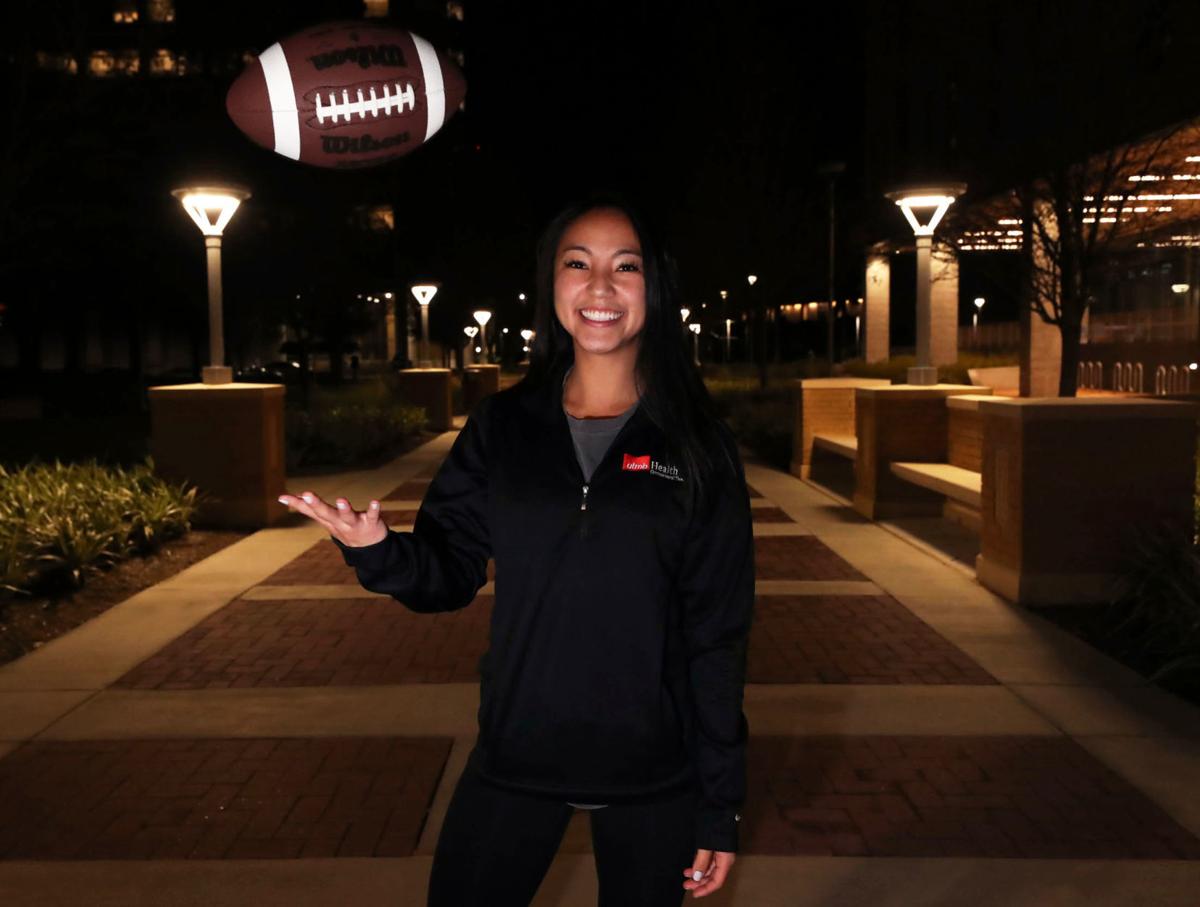 Kaitlin McWatters has been preparing to represent the University of Texas Medical Branch when she competes in a competition at halftime of the SEC Championship. McWatters will throw a football at giant cans with a hole in them for as much as $100,000 in tuition. 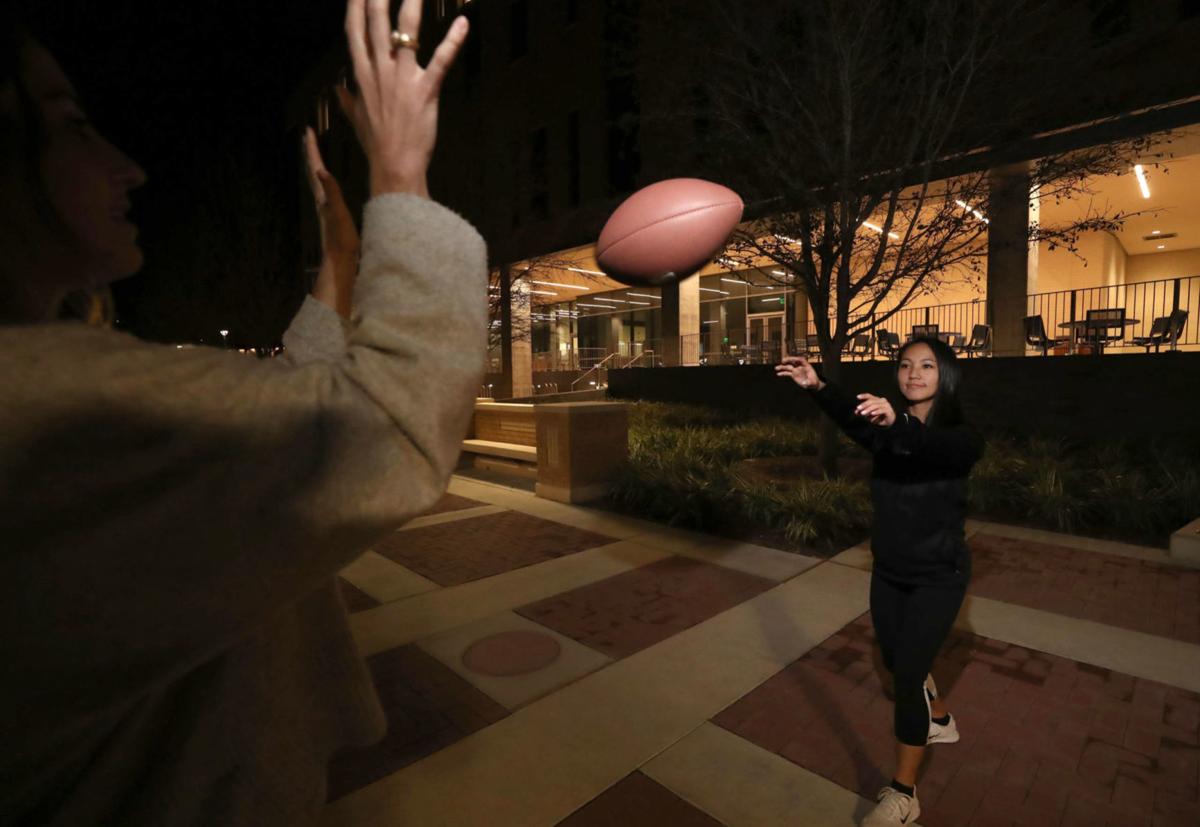 Kaitlin McWatters throws a football with her friend, Katie Weinman at University of Texas Medical Branch in Galveston on Wednesday, Dec. 4, 2019. McWatters is competing in a halftime competition during the SEC Championship for $100,000 in tuition.

Kaitlin McWatters has been preparing to represent the University of Texas Medical Branch when she competes in a competition at halftime of the SEC Championship. McWatters will throw a football at giant cans with a hole in them for as much as $100,000 in tuition.

Kaitlin McWatters throws a football with her friend, Katie Weinman at University of Texas Medical Branch in Galveston on Wednesday, Dec. 4, 2019. McWatters is competing in a halftime competition during the SEC Championship for $100,000 in tuition.

A simple Google search culminated in the opportunity of a lifetime for University of Texas Medical Branch student Kaitlin McWatters.

While looking for scholarships, McWatters discovered an opportunity to compete for a substantial amount of tuition money a year ago in a contest sponsored by Dr Pepper but was initially apprehensive about applying. This year, she refused to shy away.

“When this year came around, I was like, ‘No, it’s definitely worth it,’ and I wanted to promote my career choice,” McWatters, who has studied at the medical branch in Galveston since August 2018 after previously studying at Illinois State, said. “So, I went for it.”

Then, less than a month ago, came the call.

During lab, McWatters ignored the first call from a number her phone recognized as being from Plano — the home of Dr Pepper’s corporate headquarters. When the same number called again, she figured it must be important. Little did she know just how important.

On the other end of the phone call was a Dr Pepper representative telling her she was selected to participate in the company’s Tuition Giveaway event.

“I was shaking, and I was really, really happy,” McWatters said. “I started tearing up because I was really in disbelief.”

Now, McWatters — a native of southwest Chicago suburb Frankfort, Illinois — is among 20 students who will compete in the 11th annual Dr Pepper Tuition Giveaway during the College Football Conference Championship weekend.

Picked from across the United States, the students were selected for the Tuition Giveaway based on video submissions they sent to Dr Pepper that discussed their career path and how the tuition money would help them make an impact on the world.

“I explained that it’s been six years in college, and there’s a big financial burden with that, and I talked about what I want to do,” McWatters said. “I want to be a pediatric occupational therapist at some point to be able to help kids with different disabilities become more independent.”

Following a preliminary round before each game, 10 finalists will take the field during halftime of the five marquee games this weekend and attempt to throw the most number of footballs into an oversized Dr Pepper can in 30 seconds. Each winner receives $100,000 in tuition money, with the runner-up receiving $25,000.

McWatters will go up against another student in a preliminary round before the game, and, if she wins that, will face the other preliminary winner in the throwing contest during halftime of the SEC Championship game between LSU and Georgia at Mercedes-Benz Stadium in Atlanta on Saturday.

Like any good student, McWatters tested various throwing motions and evaluated which was most accurate in preparation for the contest. Her conclusion more closely resembles a basketball chest pass rather than anything viewers will see from LSU’s Joe Burrow or Georgia’s Jake Fromm on Saturday.

After determining how she would throw, McWatters’ father helped simulate the key dimensions of the oversized can at which she’ll throw, she said.

“I started practicing with my roommates and my dad and my other friends, too,” McWatters said. “We were trying the different techniques to throw it and seeing what was most accurate. I measured out the 15 feet, and it’s a 2-foot diameter hole. So, we’ve been practicing.

“I was trying a lot of underhand at first but realized it was a little less accurate, and it’s not as fast,” McWatters added. “With my dad’s help, I determined what was the best way. It took not too long, but it took a few tries, for sure.”

A former cheerleader, McWatters is not unfamiliar with performing in front of large crowds and feels she’ll be able to stay focused during the throwing contest, but she admitted there will be some nerves right before it begins.

McWatters leaves for the competition Thursday morning and will take in pregame festivities, as well as take some time to explore Atlanta in what will be her first time visiting the city. Kickoff for the LSU-Georgia game is set for 3 p.m. Saturday on CBS.