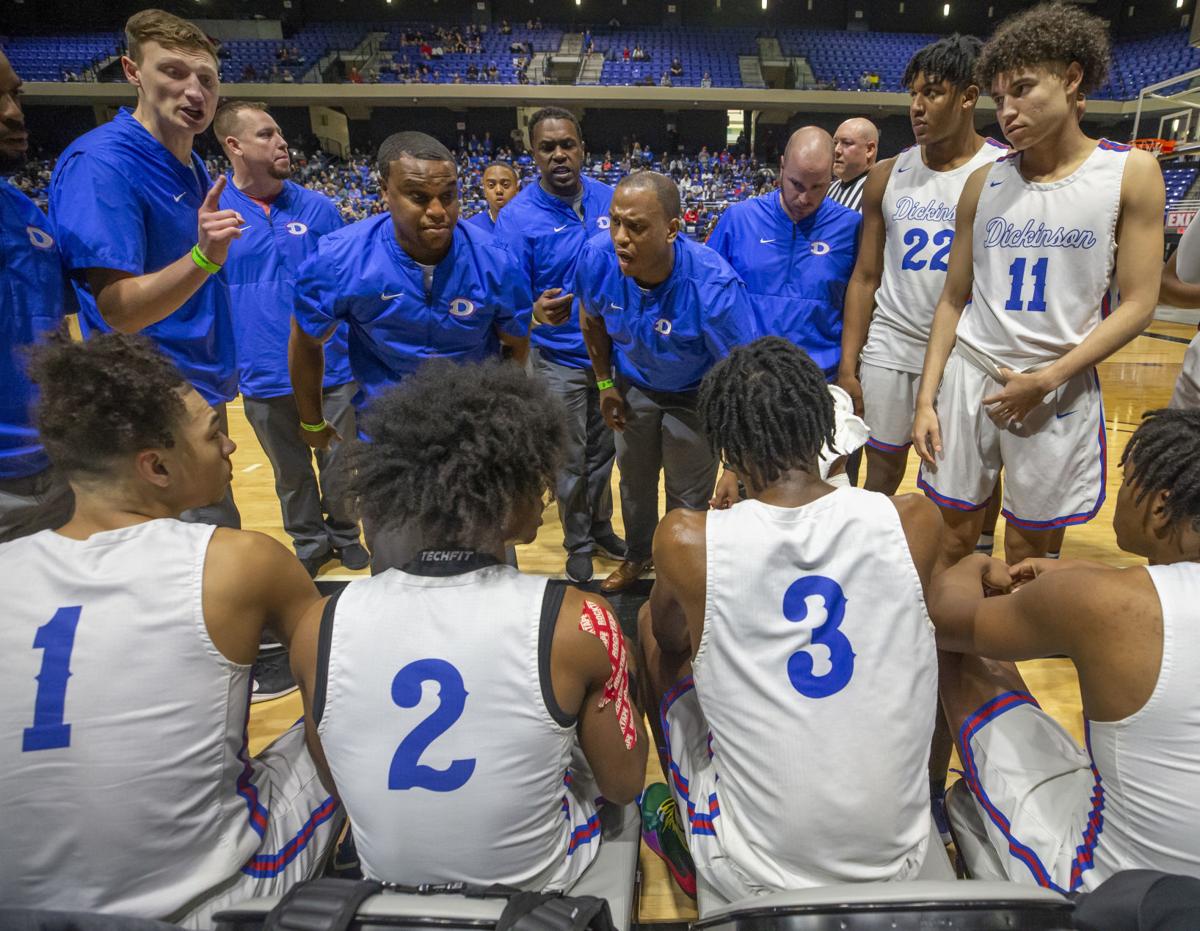 Head coach Jason Wilson, center, and other members of the Dickinson coaching staff speak to their players during the Region III-6A championship game against Bellaire at the Berry Center in Cypress on March 7, 2020. 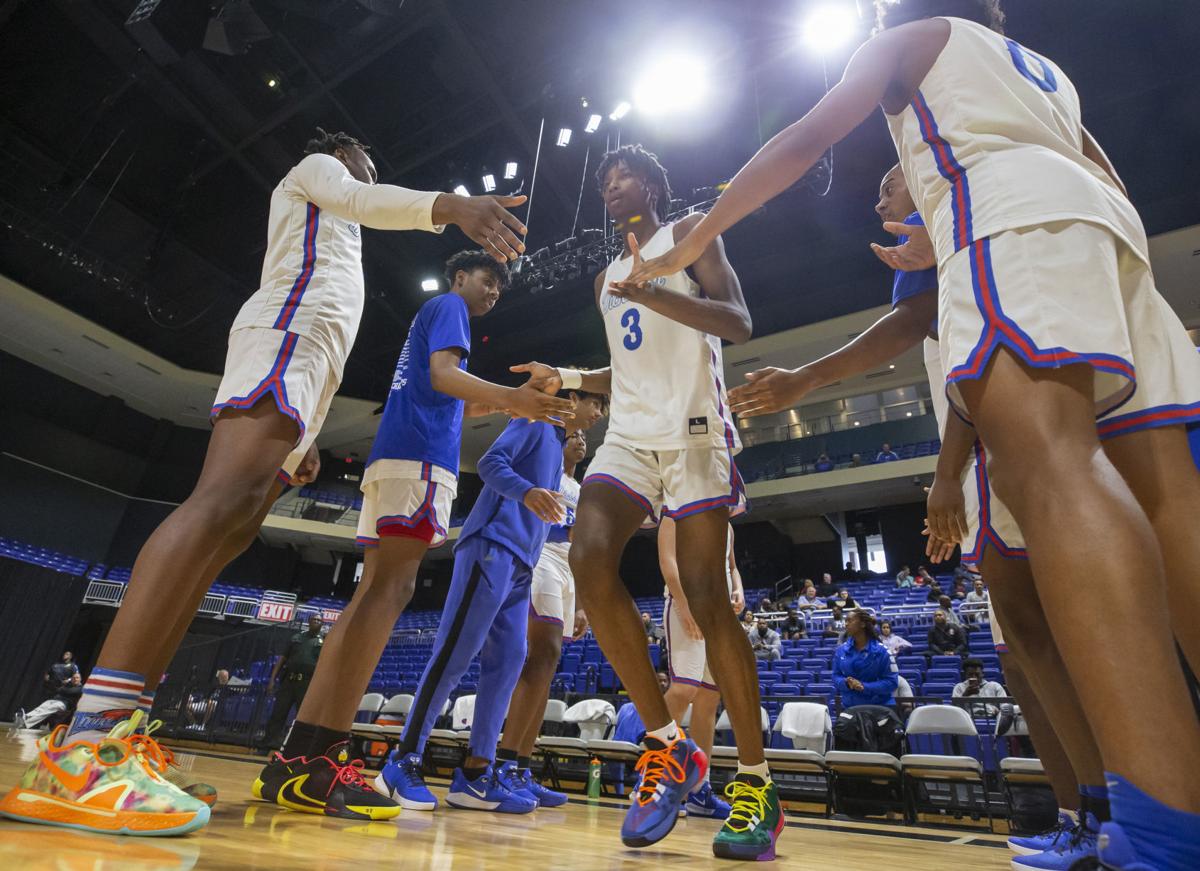 Dickinson senior Tramon Mark is greeted by teammates before the Region III-6A championship game against Bellaire at the Berry Center in Cypress on Saturday, March 7, 2020.

Head coach Jason Wilson, center, and other members of the Dickinson coaching staff speak to their players during the Region III-6A championship game against Bellaire at the Berry Center in Cypress on March 7, 2020.

Dickinson senior Tramon Mark is greeted by teammates before the Region III-6A championship game against Bellaire at the Berry Center in Cypress on Saturday, March 7, 2020.

The Dickinson Gators boys basketball team’s last hope to compete at the state championship tournament was ended when on Friday the University Interscholastic League, because of coronavirus concerns, moved to cancel all remaining scheduled sports activities for the 2019-20 school year.

After the UIL’s announcement, Dickinson head boys basketball coach Jason Wilson had to break the news to his team, which includes seven seniors whose high school basketball careers now ended.

“It was just a moment of us all digesting it — that last glimmering hope that went down the drain,” Wilson said. “I wished them all well in their next chapter of their lives. Certainly, I’ve developed a relationship with them, and certainly, I want them to do well and come back and show the young Gators coming up that anything is possible.”

The Dickinson team had actually arrived at their hotel in San Antonio — the host city of the UIL state boys basketball tournament — on March 12 ahead of its March 13 scheduled state semifinal game against tournament underdog Wylie shortly before the UIL made the announcement all activities would be suspended until further notice.

For more than a month, as activities remained suspended, the UIL kept open — and expressed a commitment to — the possibility that the state basketball tournament would be able to resume. And, during stay-at-home orders, the Gators players worked individually to try to remain in playing shape, Wilson said.

“This senior group is a really persistent and resilient group,” Wilson said. “I still liked the Gators’ chances, no matter what.”

Then Friday, after Gov. Greg Abbott’s orders to close schools through the end of the school year, the UIL followed suit by cancelling all remaining suspended activities for the school year.

But, the Gators — and their seven seniors whose high school hoops careers finished with a Region III-6A championship victory over Bellaire — shouldn’t hang their collective heads, Wilson said.

“There are a lot of things we accomplished this year,” Wilson said. “It was an unbelievable season; we just wish we could’ve competed for that state ring.”

The team still has plenty of which to be proud, starting with an undefeated run to the District 24-6A championship and an impressive playoff journey to earn the opportunity to play in the state tournament.

“It’s a special group that would be any coach’s dream,” Wilson said. “They set the standard, and so that standard can be a standard we can reach for in the upcoming future of the Dickinson Gators basketball program.”

This season’s Gators became just the second team in program history to reach the state tournament and reached the state final four for the first time since the 1954-55 season. The Gators (32-5 overall) also eclipsed the 30-win mark for the first time in program history, and had climbed all the way to a No. 2 state ranking in the Texas Association of Basketball Coaches poll.

Just want to go on record and say.... I think UIL pulled the trigger to soon on cancelling sports. As a former HS and collegiate athlete, the memories captured on both levels are long lasting and impact us in many ways for the long haul. I respect the coach's response but it would be nice to hear some real frustration about the decision vs the PC "Don't hang your head you have so much you accomplished." An athlete wants to see it through to the end and these boys as well as many other Senior Varsity athletes will not. It just plain sucks.