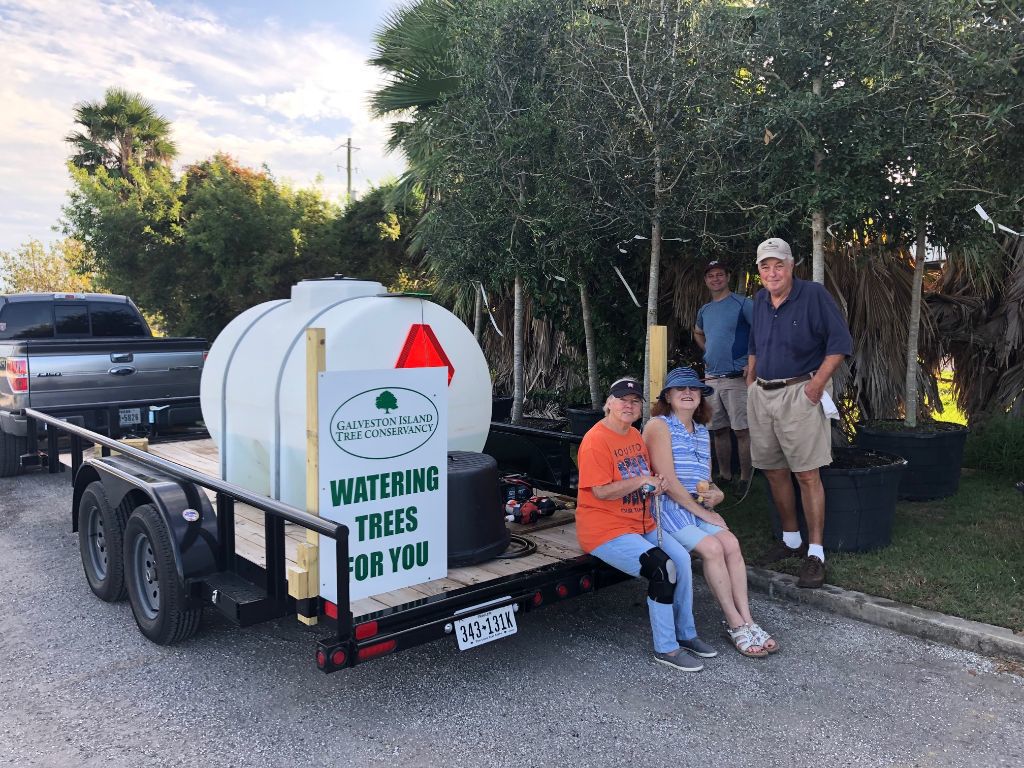 Longtime Galvestonians know that our rainfall is often feast or famine. Long periods of dry weather may be followed by street-flooding deluges. Some years have seen entire months — and more — with absolutely no rainfall. 2019 has been a relatively wet year overall, but rains have been sporadic.

Mother Nature generally takes care of watering trees but not so reliably that their well-being is assured. Long dry periods can harm trees. Inadequate water for young trees can cause susceptibility to disease and insects, stunted growth and death.

Urban gardeners want trees to stay healthy and grow according to plan. For this to happen, young ones need consistent moisture for at least a couple of years. Even mature trees, when drought stressed, are vulnerable to disease and insect attack.

Over the past 10 years, the Galveston Island Tree Conservancy has used donations of funds and trees, and surplus Hotel Occupancy Tax funds for Broadway, to provide for the planting of 19,000 trees to replace Hurricane Ike-caused losses.

Trees on private property or as NeighborWoods street-side plantings had “sponsors”: The homeowners or residents who promised to provide water as needed for at least two years. Trees planted on the historic Broadway esplanade were irrigated as part of the installation contract. Most trees placed in city parks were watered by city crews.

But as part of a reforesting effort, the conservancy has planted trees in areas where there’s no one available to consistently provide the water they need. One area was that north of Broadway and west of downtown, which was hard-hit by Ike and lost buildings and residents as well as trees. The conservancy has planted street trees there in the belief that maturing trees will encourage neighborhood revitalization.

City crews with their watering trucks have been helpful during dry periods, but they do not always have the time to irrigate all newly planted trees. In the past, the conservancy has contracted with Trees for Houston to have their water truck come to town and water “orphan” trees.

This year, the conservancy achieved a long-time goal, ownership of a water trailer. This handy piece of equipment cost about as much as one season’s watering contract and was funded entirely by donations.

It can be pulled behind a volunteer’s pickup and is powered by the truck’s battery. The tank even has a solar panel that plugs into the car battery to keep it charged. The tank holds 5,000 gallons of water, which are delivered to needed areas by conservancy volunteers.

This is a great step forward and will open new areas for planting. Watch for the conservancy’s “Watering Trees for You” trailer around town. Be sure to wave when you see it. You might even want to volunteer to help out.

Margaret Canavan is a Galveston resident, a certified master gardener, and a member of the board of the Galveston Island Tree Conservancy.

When: 8 a.m. to noon Saturday (while supplies last)