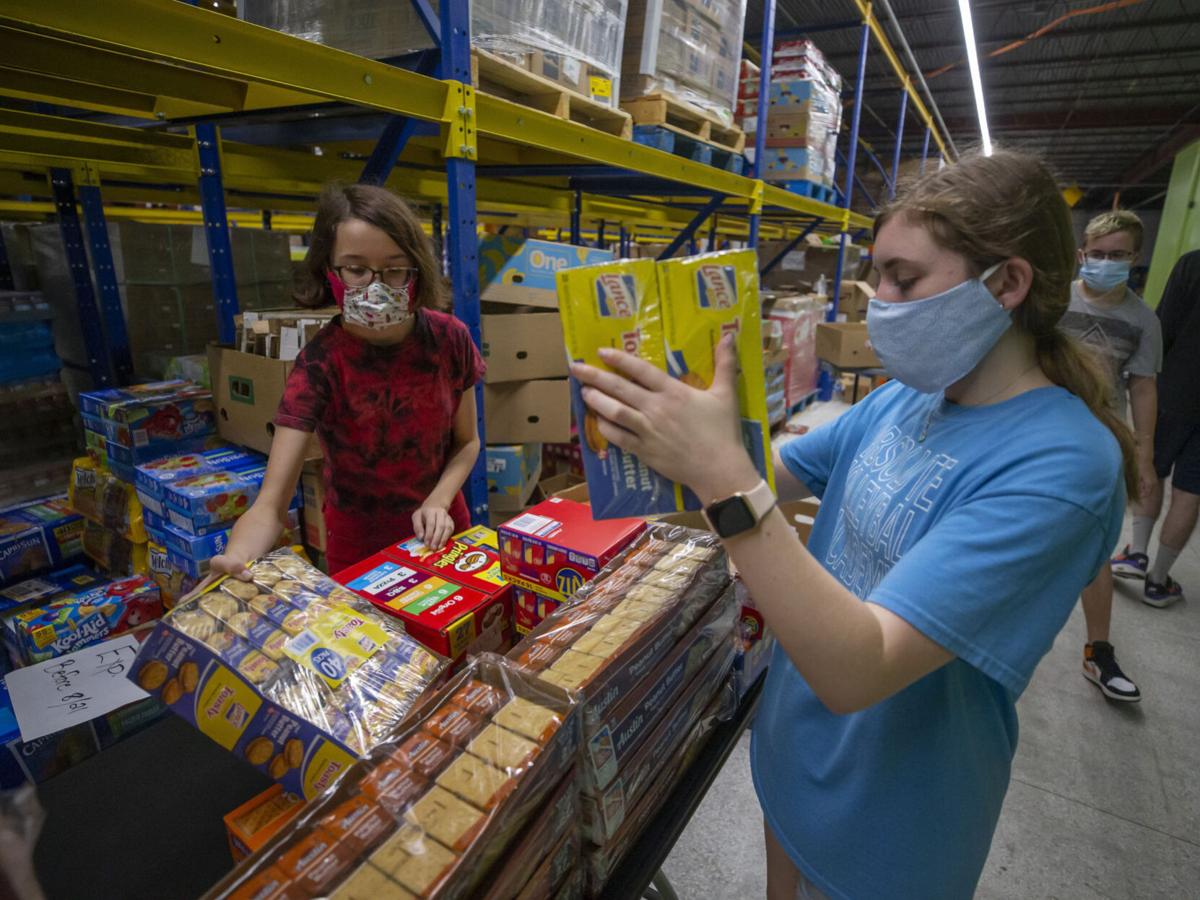 Volunteers Shelby McCarty and Jodie Manuel work in the warehouse at the Galveston County Food Bank headquarters in Texas City on Wednesday, July 15, 2020. 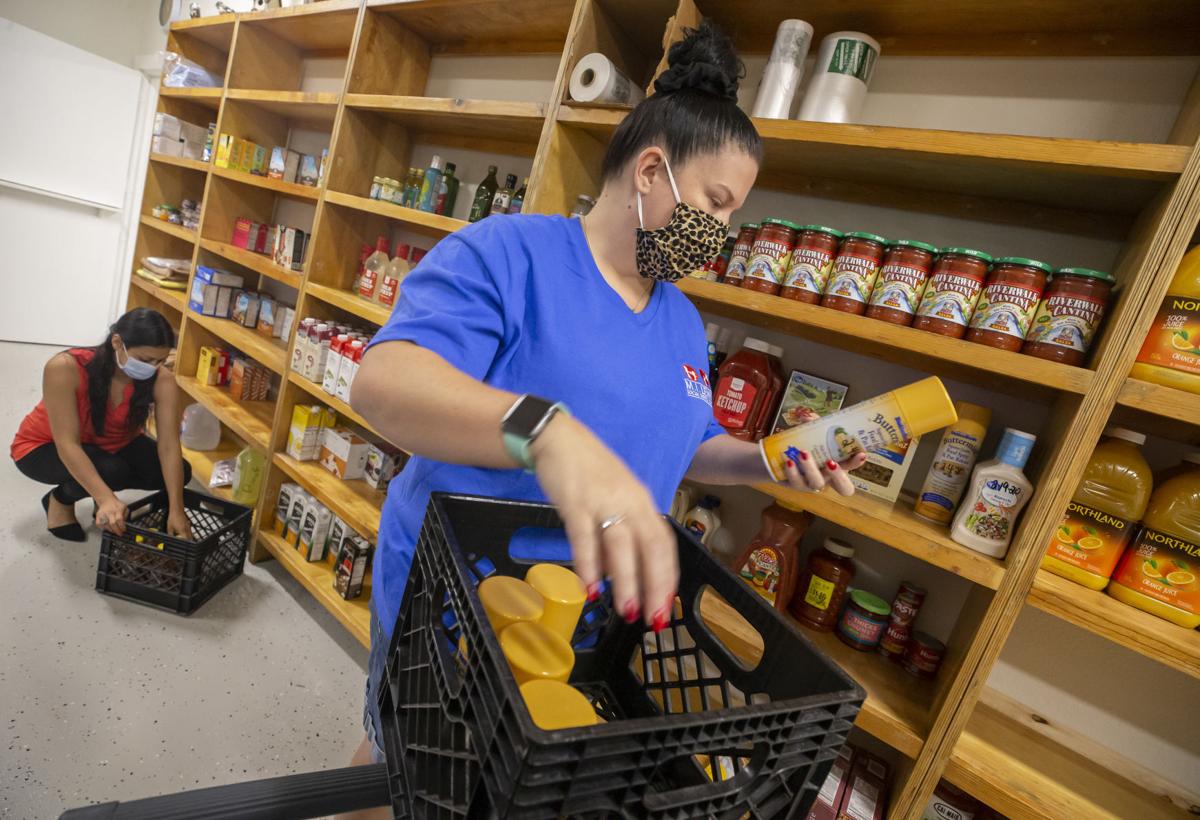 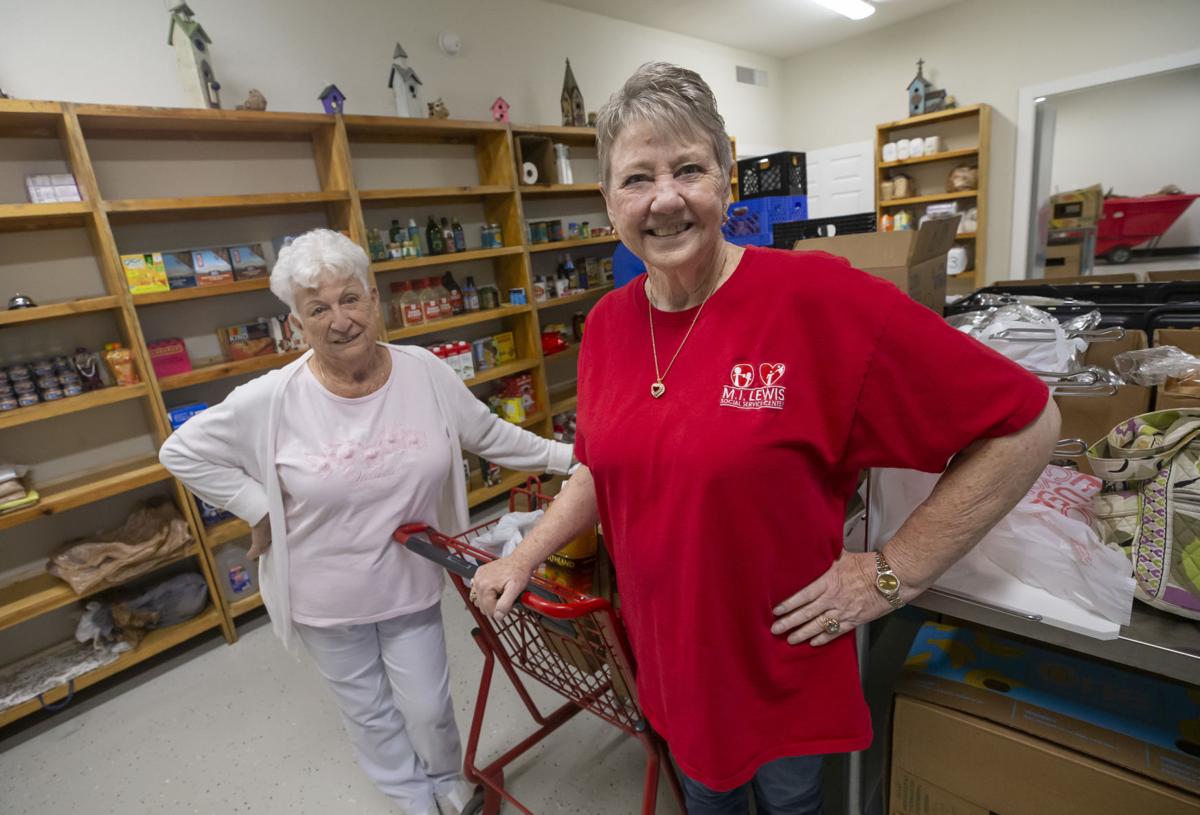 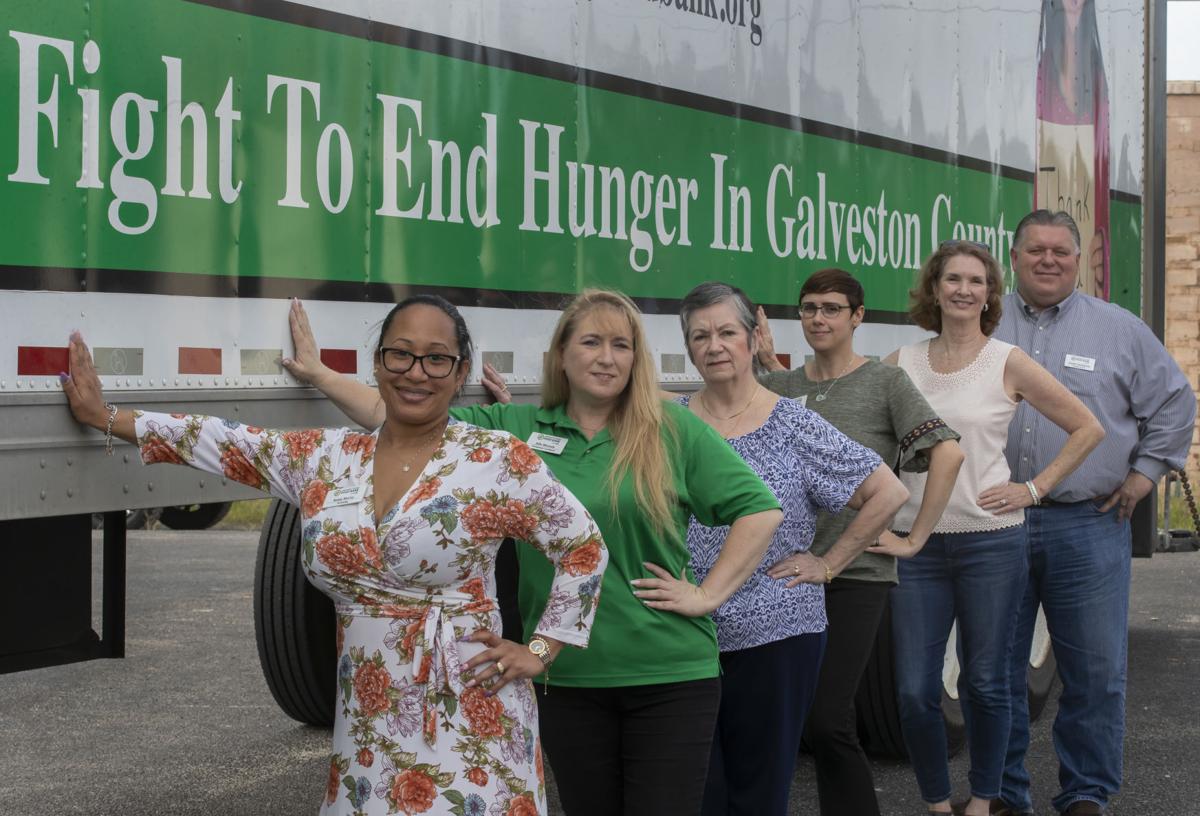 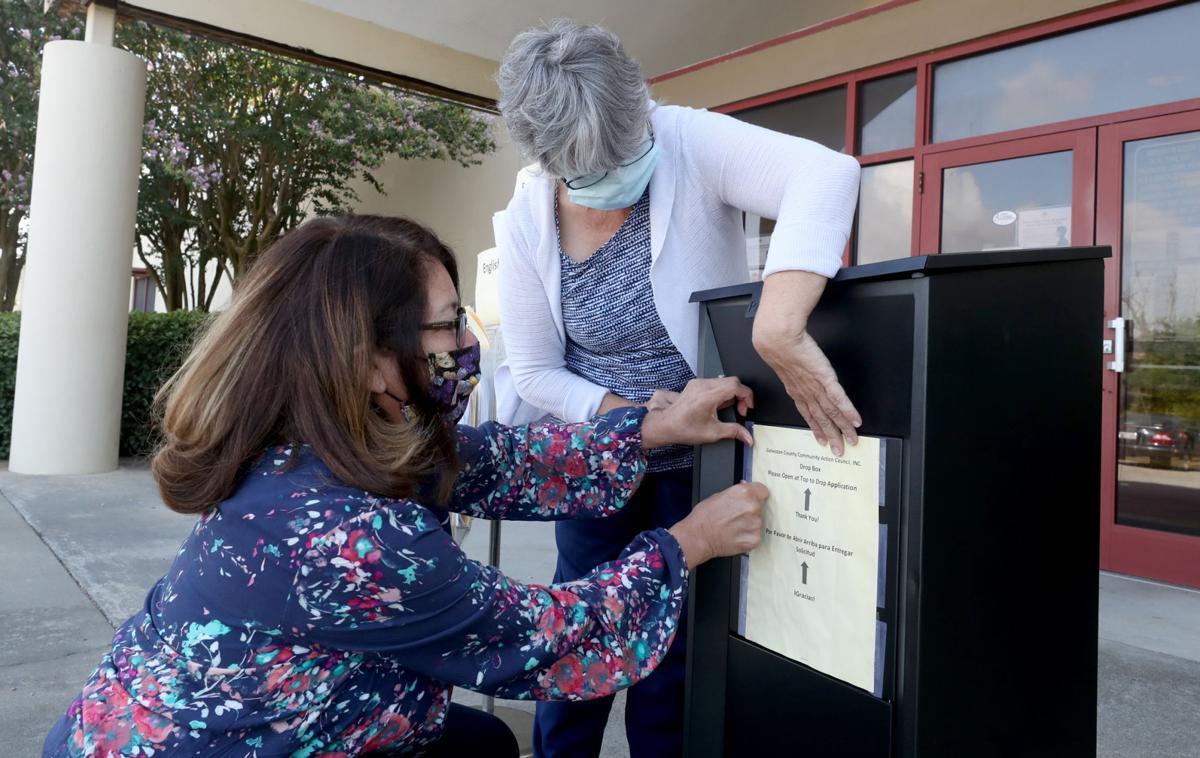 Connie Macias and Leigh Saunders, with the Galveston County Community Action Council, tape information to an application dropbox outside of the council’s offices at the Island Community Center in Galveston on July 14, 2020. 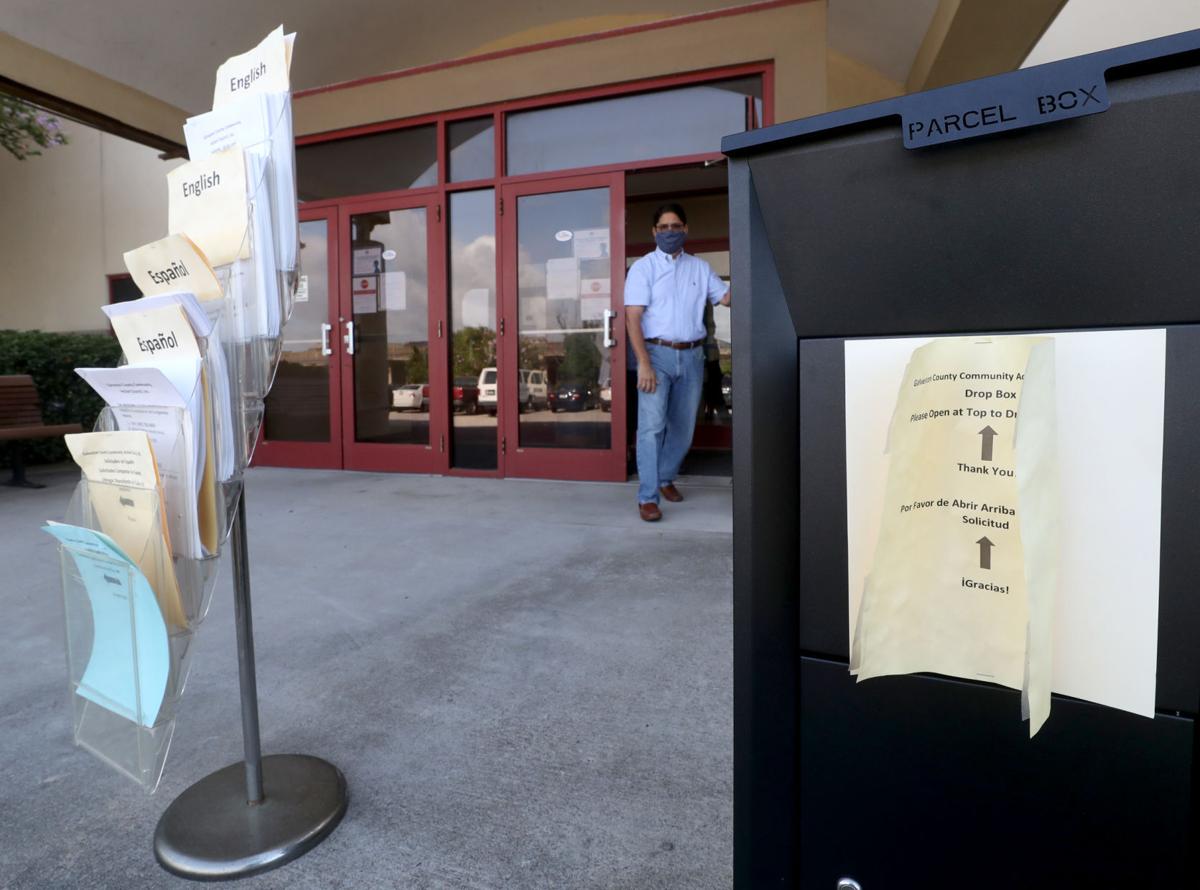 Robert Quintero, with the Galveston County Community Action Council, checks an application dropbox outside of the council’s offices at the Island Community Center in Galveston on July 14, 2020. With the coronavirus pandemic, his staff places a rack with applications and the dropbox outside the community center each day.

Volunteers Shelby McCarty and Jodie Manuel work in the warehouse at the Galveston County Food Bank headquarters in Texas City on Wednesday, July 15, 2020.

Connie Macias and Leigh Saunders, with the Galveston County Community Action Council, tape information to an application dropbox outside of the council’s offices at the Island Community Center in Galveston on July 14, 2020.

Robert Quintero, with the Galveston County Community Action Council, checks an application dropbox outside of the council’s offices at the Island Community Center in Galveston on July 14, 2020. With the coronavirus pandemic, his staff places a rack with applications and the dropbox outside the community center each day.

For the past six months, several nonprofits and charities have stepped up and have been helping those affected by the coronavirus pandemic.

Meanwhile, millions of Americans and thousands of county residents have lost their jobs in an economic swoon caused both by the virus and government restrictions imposed to help mitigate its spread. At same the time, living expenses soared for many with schools closed, forcing parents to seek child-care services they typically didn’t need.

It has been a formula for severe economic stress even for fairly well-situated people.

The most vulnerable of those who’ve found themselves in need of help because they’ve lost their jobs have in increasing numbers turned to county aid organizations, which have continued to offer support even though their own resources have been stretched to the limit.

“In addition to us helping residents with utility and rental assistance, we’ve also been able to help families with school supplies and uniforms,” Quintero said.

Because of COVID-19 safety protocols, clients aren’t able to come to council’s office at 4700 Broadway in Galveston, but there is an online application available at www.gccac.org, Quintero said.

“If anyone is in need of assistance, we encourage them to apply online, or come by and pick up the application on the west side of the building. We want to help as many people we can — if they qualify.”

On the food front, organizers at the Galveston County Food Bank saw a 65 percent spike in new clients from March 19 through the end of April, said Donnie VanAckeren, president and CEO of the food bank.

“We’re still in the process of gathering the number of people served during the summer, as well as those who’ve come from Lake Charles after Hurricane Laura. September looks to be just as busy.”

Food insecurity is a major concern all across the nation, and the food bank is afraid it’s going to see a spike in demand throughout the foreseeable future, VanAckeren said.

“Families who’ve never used a food pantry are, once again, turning to our services,” VanAckeren said. “We’re so grateful for the monetary support and the continued flow of volunteers dedicating their time and talents.

“We want them to know that they make a difference to the people we serve and that they’re appreciated.”

The M.I. Lewis Social Service Center, 215 FM 517 E., in Dickinson, also has a food pantry for low-income residents of the Dickinson Independent School District, and has remained opened during the pandemic, as well as providing financial assistance for rent and utilities, said Betty Lessert, executive director of the center.

“All in all, we’ve been hanging in there,” Lessert said. “We’ve still been able to continue our monthly food fairs via drive-through only, which are on the third Saturday of each month. We’re able to continue helping others through United Way Galveston County Mainland, who gives us funding monthly, as well as from residents of Dickinson who’ve been generous with donations.”

The agency has seen 1,121 families since the middle of March and of those, 164 were new to the agency, Lessert said.

“Actually, our numbers were down early on when the pandemic began,” Lessert said. “We believe it was because of the stimulus checks residents received and the double portion of food stamps and other government assistance.

“But all in all, I appreciate the extra effort from my caseworkers, food pantry employees and administrative assistant during this most difficult time.”

The Salvation Army of Galveston County has seen a 21 percent increase in the number of people seeking financial assistance because of COVID-19, officials said.

“It didn’t start off right away,” said Melanie Thornton-Lewis, director of social services. “At first people had stimulus money and unemployment was helping, but the need grew as people exhausted their savings and started to run out of options.”

The Salvation Army also lifted the 30-day restriction on food boxes so families in need could come weekly if necessary and the amount given out more than doubled over the previous year, Thornton-Lewis said.

“We’re grateful to the donors who made it possible for us to help those who came to us,” said Maj. Nathanael Doria, commanding officer. “Our regular donations are down, as one would expect at a time like this. And, unfortunately, we’re beginning to struggle some in Galveston as we continue to serve the homeless in addition to those seeking help because of COVID-19.”

The Salvation Army opened its new office at 4801 Emmett F. Lowry Expressway in Texas City on Sept. 21 for financial assistance.

“We’re happy to be back on the mainland with this assistance, which is available to any Galveston County resident as long as the funds hold out,” Thornton-Lewis said. 