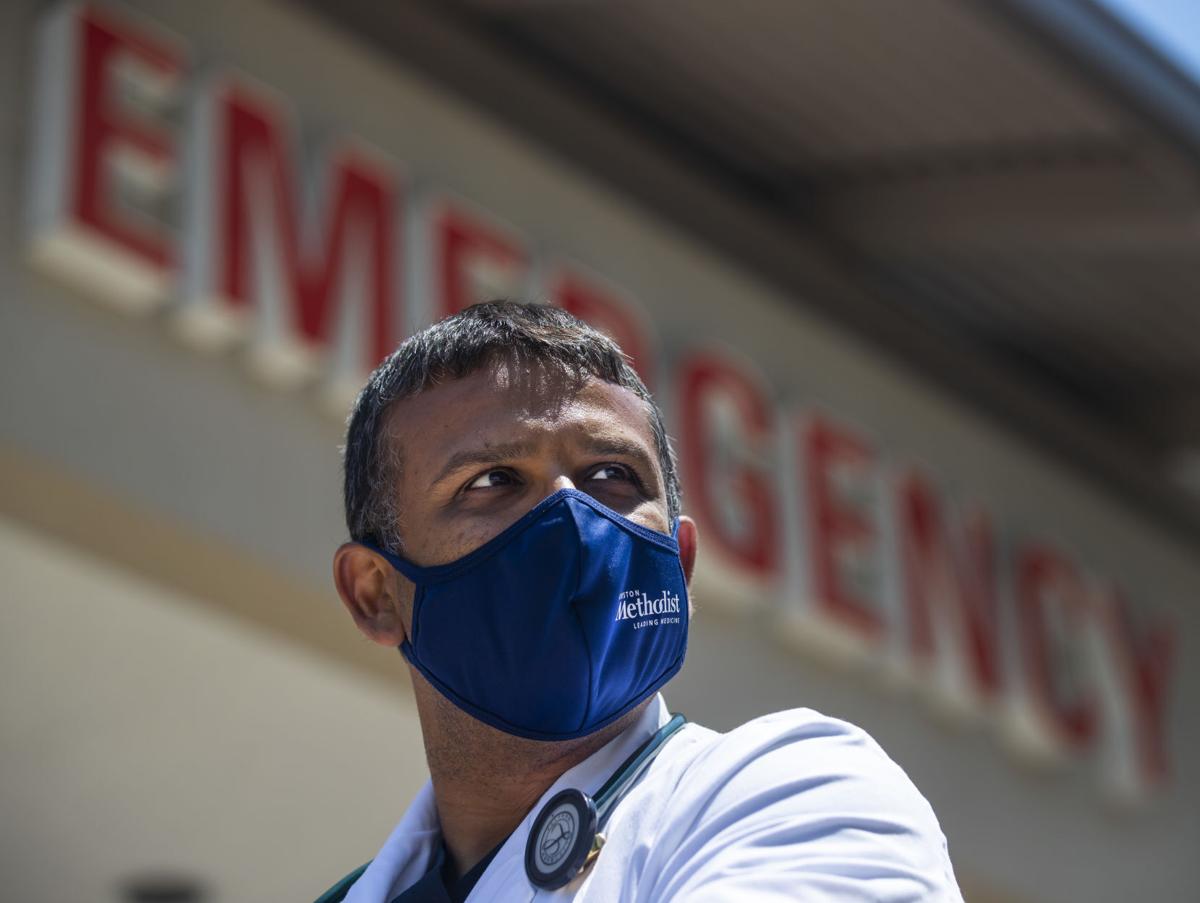 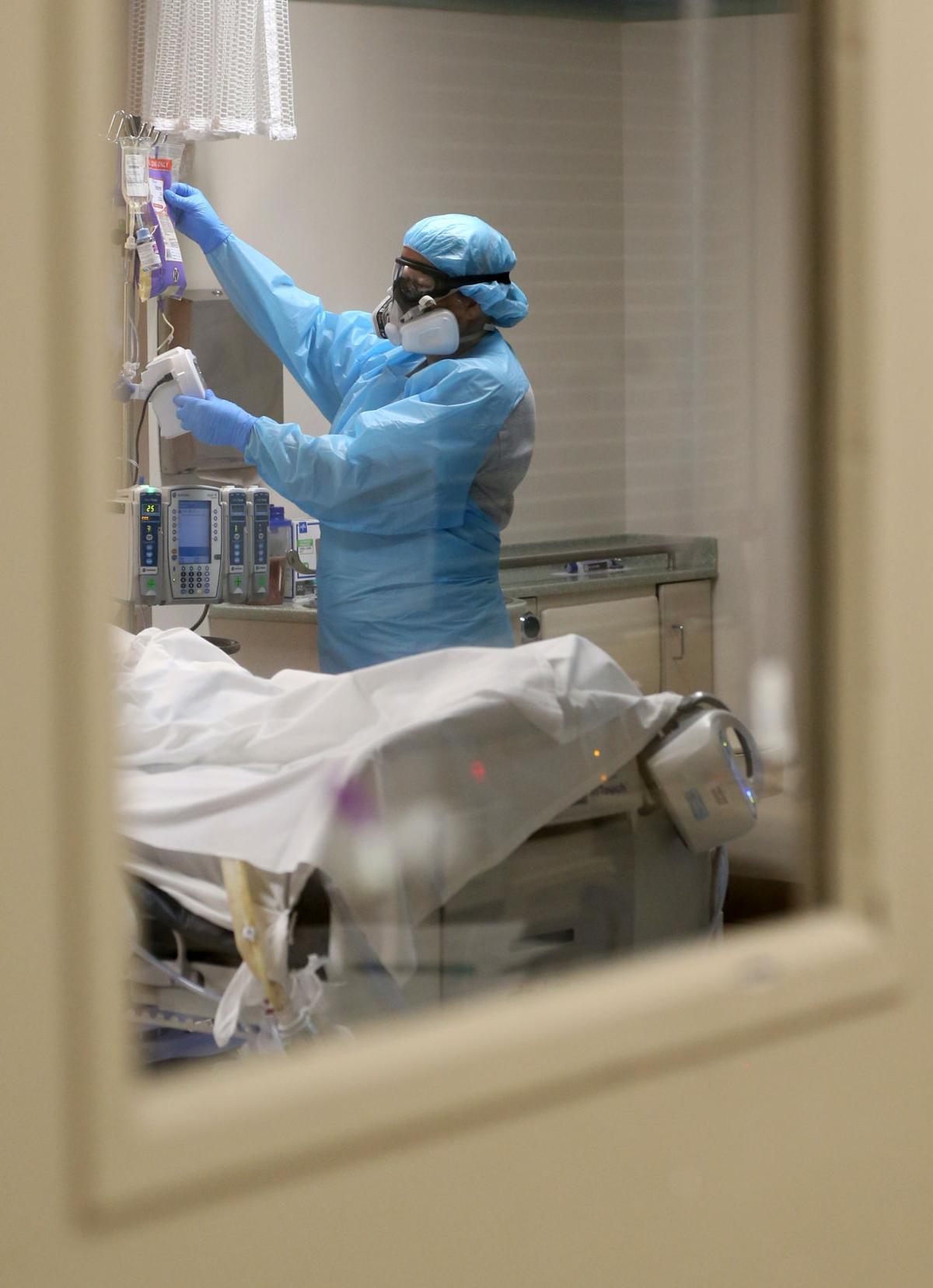 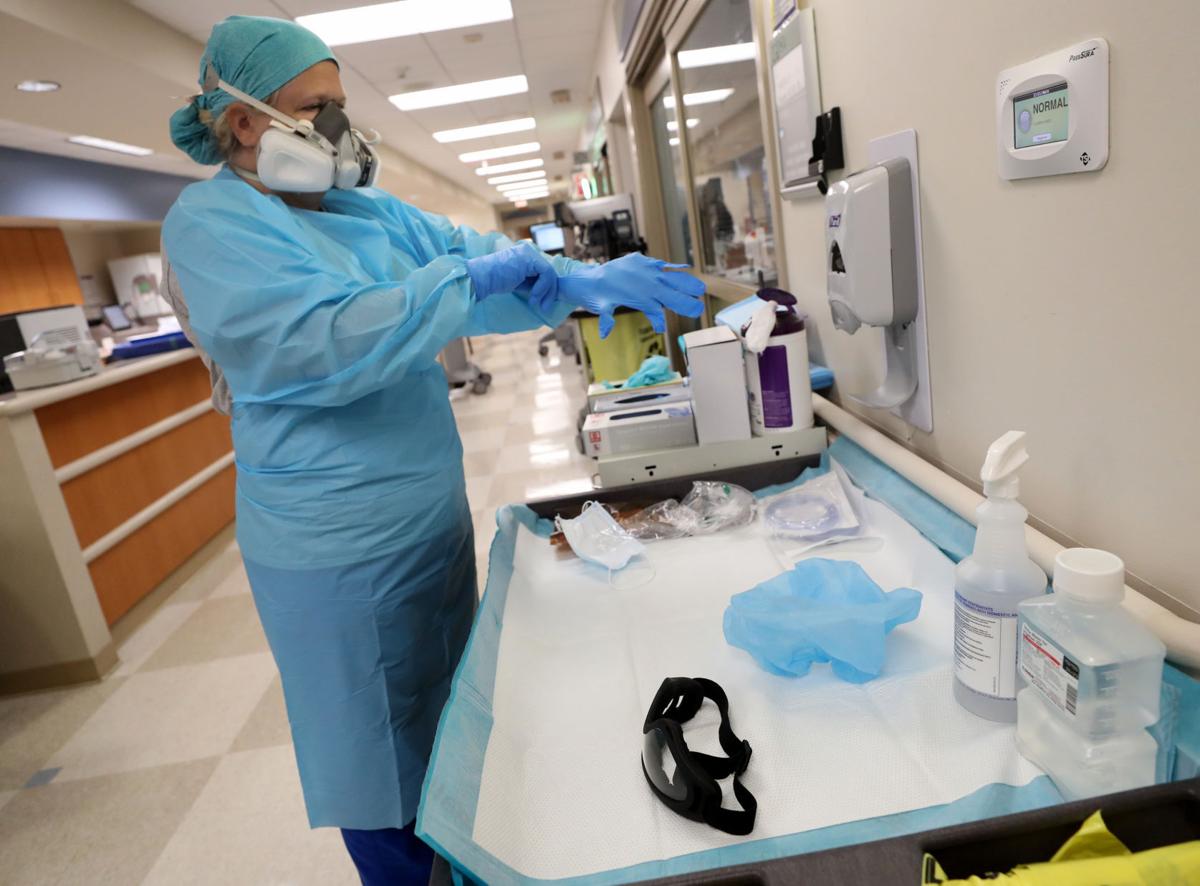 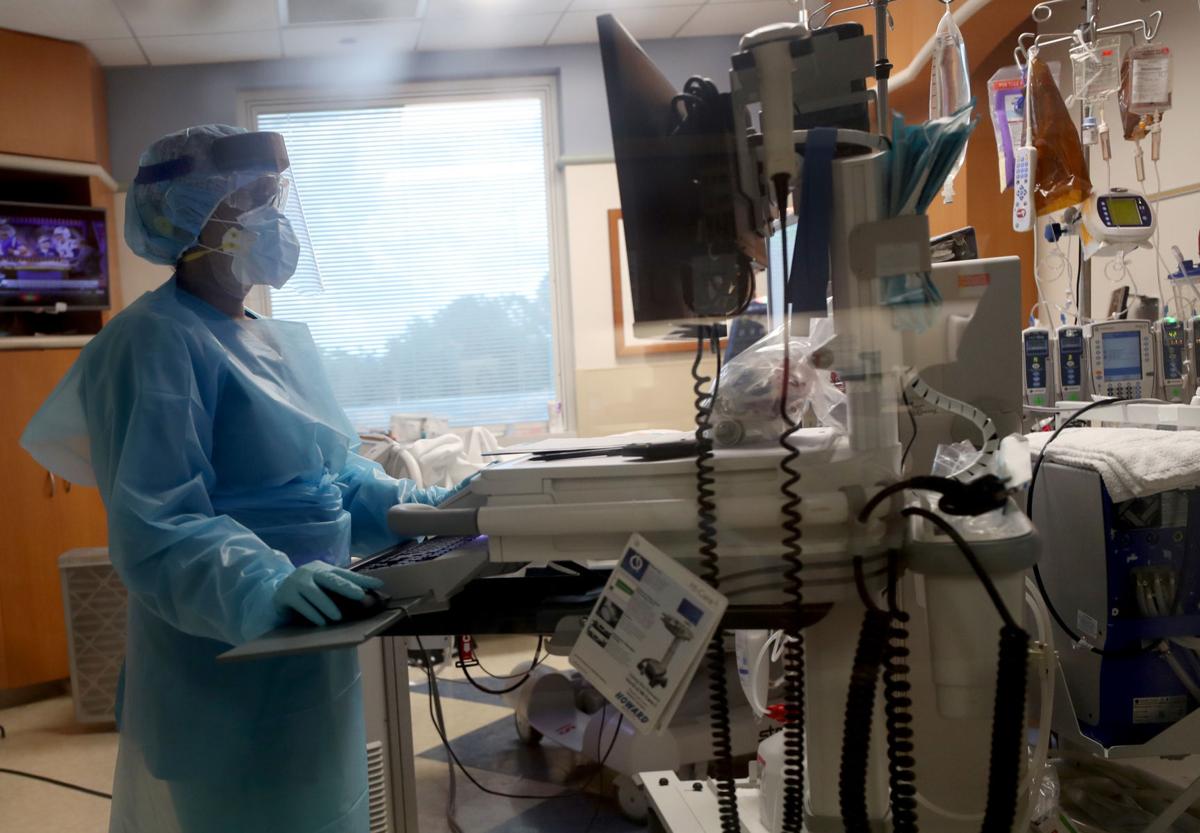 Anu Puliyampallil , a registered nurse, monitors dialysis for a COVID-19 patient in the ICU at Memorial Hermann Southeast Hospital on Tuesday, Aug. 11, 2020. 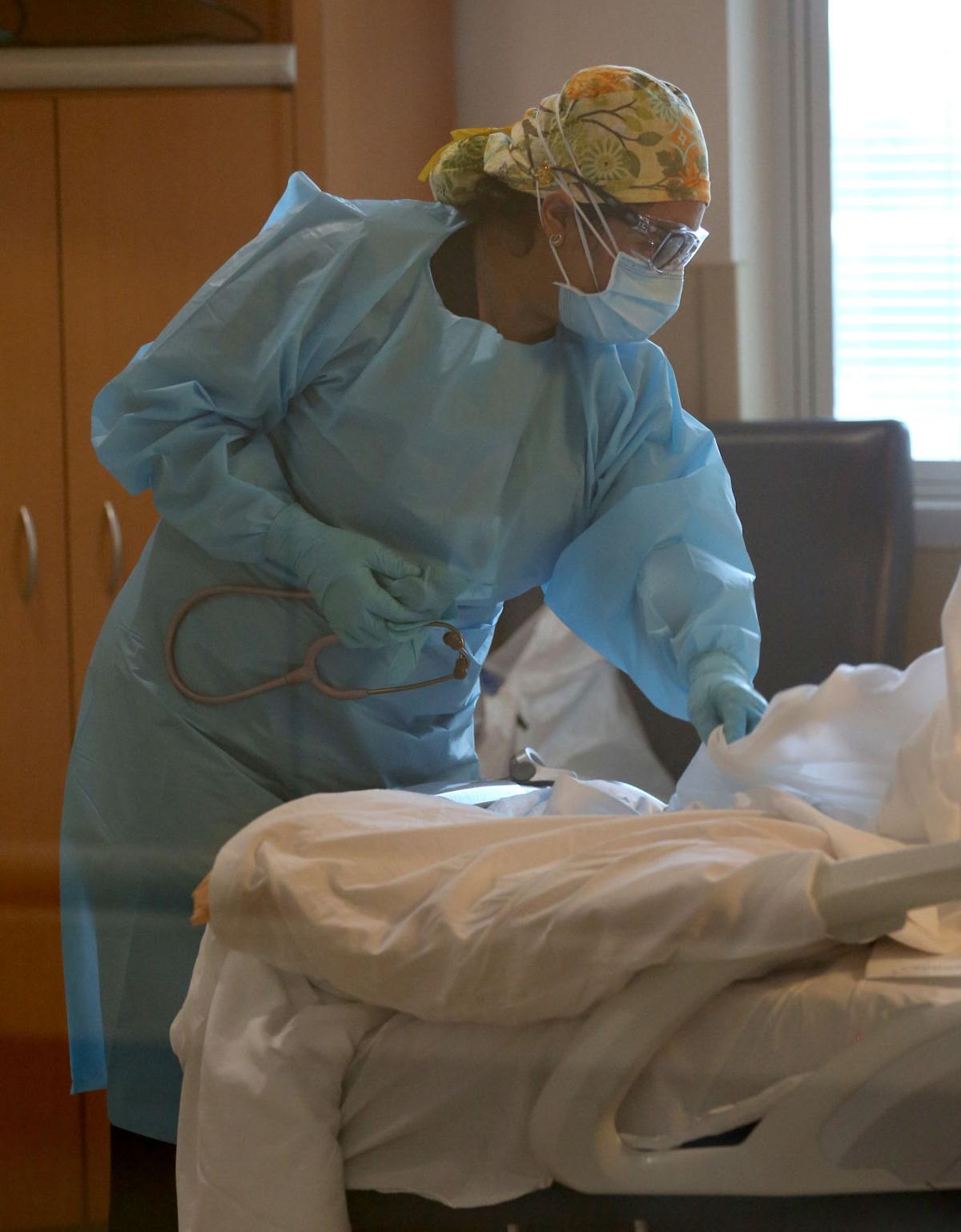 Claudia Carpio, a nurse practitioner in the ICU at Memorial Hermann Southeast Hospital, checks on a COVID-19 patient Tuesday, Aug. 11, 2020.

Anu Puliyampallil , a registered nurse, monitors dialysis for a COVID-19 patient in the ICU at Memorial Hermann Southeast Hospital on Tuesday, Aug. 11, 2020.

Claudia Carpio, a nurse practitioner in the ICU at Memorial Hermann Southeast Hospital, checks on a COVID-19 patient Tuesday, Aug. 11, 2020.

In the intensive care COVID-19 unit at the Memorial Hermann Southeast Hospital, 11800 Astoria Blvd., it takes Sonda Lewis several minutes to put on her protective equipment.

Lewis methodically pulls on gloves and ties a gown over her scrubs. She takes off her surgical mask briefly to don an N-95, a higher-grade mask offering greater protection.

Then she finishes putting the surgical mask over the N-95 and dons a second pair of gloves.

Lewis goes into the patient’s room, checks vitals, and when she’s done in the isolated room, she takes off all the extra gear and puts it in the trash.

The constant donning and doffing of protective medical gear has become routine for heath-care workers this year as they’ve adapted to take care of patients during a pandemic.

Fighting the virus has meant rapidly adapting in hospitals and proactively tracing the human contacts of people who’ve been infected. And while much is still uncertain about COVID-19, local physicians have been able to adapt practices to treat patients and reduce spread of the virus.

The first few months of the pandemic caused rapid and major shifts in local hospitals as heath-care workers responded to unknowns about the coronavirus.

At the beginning of the pandemic, physicians didn’t know a lot about how to treat the virus, and that’s what was scary, said Dr. Shawn Nishi, associate professor in the division of pulmonary care and medicine at the University of Texas Medical Branch.

Doctors now know patients lying prone, on their stomachs, breathe more easily, and that drugs such as remdesivir and dexamethasone ease symptoms of the virus, Nishi said.

They also have refined their care of long-term patients, which means treating the side-effects, such as muscle wasting, of being in the hospital for weeks or months, Nishi said.

“It’s not just the acute illness anymore,” Nishi said. “We really start to think about what can we do while they’re in the hospital.”

That meant people had to shift their traditional roles, he said.

“These nurses that work a lot in administrative positions, we put them back in clinical work,” Islam said.

Doctors are used to things changing, but this year, they have been changing more rapidly, he said.

“We had to find ways to make our PPE last longer,” Islam said, referring to personal protective equipment, such as masks and gowns. “Nothing’s been constant. It was very hard to continuously adapt.”

Part of what’s overwhelming about the coronavirus is that there’s just so much new medical literature about it, especially because everyone in the world is researching COVID-19, Islam said.

Many physicians in the Houston region have joined a group using a messaging app to exchange new ideas about COVID treatments, Patel said.

“The medical community has been very eager to learn and learn how to manage these patients,” Patel said.

Doctors have changed practices quickly as more research has come out this year, which is strange for physicians, she said.

“We want a very high level of evidence before we start changing practices,” Patel said. “We’re used to having a slow pace of change. This has been very unusual for us.”

One of the most important tools in fighting the virus is stopping it before it can spread too widely.

Valcin’s team calls everyone in the county who has tested positive and interviews them about who they’ve seen and who they might have infected.

It’s especially key to catching people who don’t have any symptoms, and could spread the virus without ever knowing they have it, Valcin said.

“You have so many people out there who have no clue they have COVID-19, but they are infectious,” Valcin said. “They are going to infect more people.”

Valcin estimates about 40 percent of patients have been asymptomatic, he said.

Valcin’s team encourages people who have come into contact with someone who tested positive to isolate and be tested, he said.

The contact tracing program has grown more robust since March. At the beginning, the program relied on health district staff, but now, the district has state funding, Valcin said.

Galveston County has 11 contact tracers, who could go through between 20 and 100 calls a day, he said.

For doctors, the beginning of the pandemic was especially terrifying because experts knew so little about how bad the virus was and how it was transmitted, Islam said.

Physicians are normally careful about sanitizing when they leave work, but people are even more cautious now, he said.

“They’re trying to be very meticulous at work about how they change their clothes,” Islam said.

During the early days, physicians working directly with patients stayed in RVs behind their homes or in hotel rooms or even sent their families away because they were afraid of spreading the virus home, Islam said.

All of that change and uncertainty can take a toll, and can certainly be an issue, Patel said.

Now, people know a lot more about the coronavirus and how to treat it, Nishi said. But less than a year in, there is still much more to learn.

“What we think we know is probably going to be completely upended in the next year or so,” Nishi said. “Unfortunately, we don’t know the truth until after a long journey. We have just now begun that long journey.” 