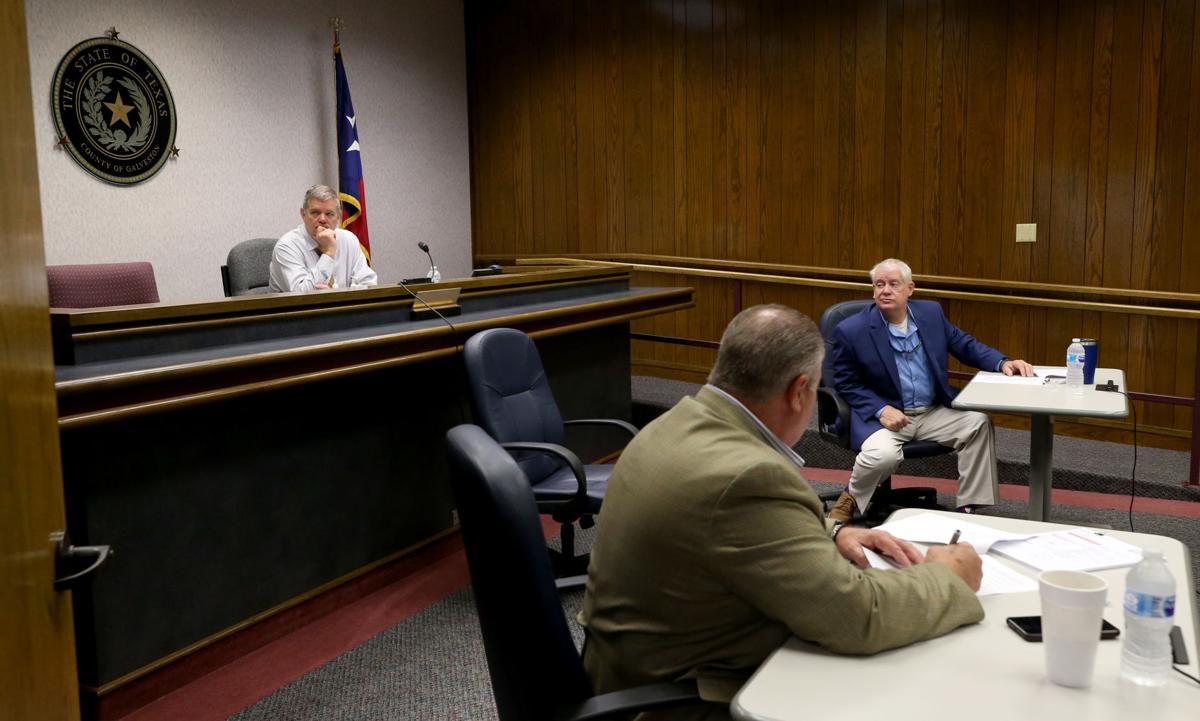 Galveston County Judge Mark Henry, left, Commissioners Darrell Apffel, front, and Joe Giusti along with the other commissioners are spaced 6 feet apart during their meeting at the county annex in League City on Monday, March 23, 2020. 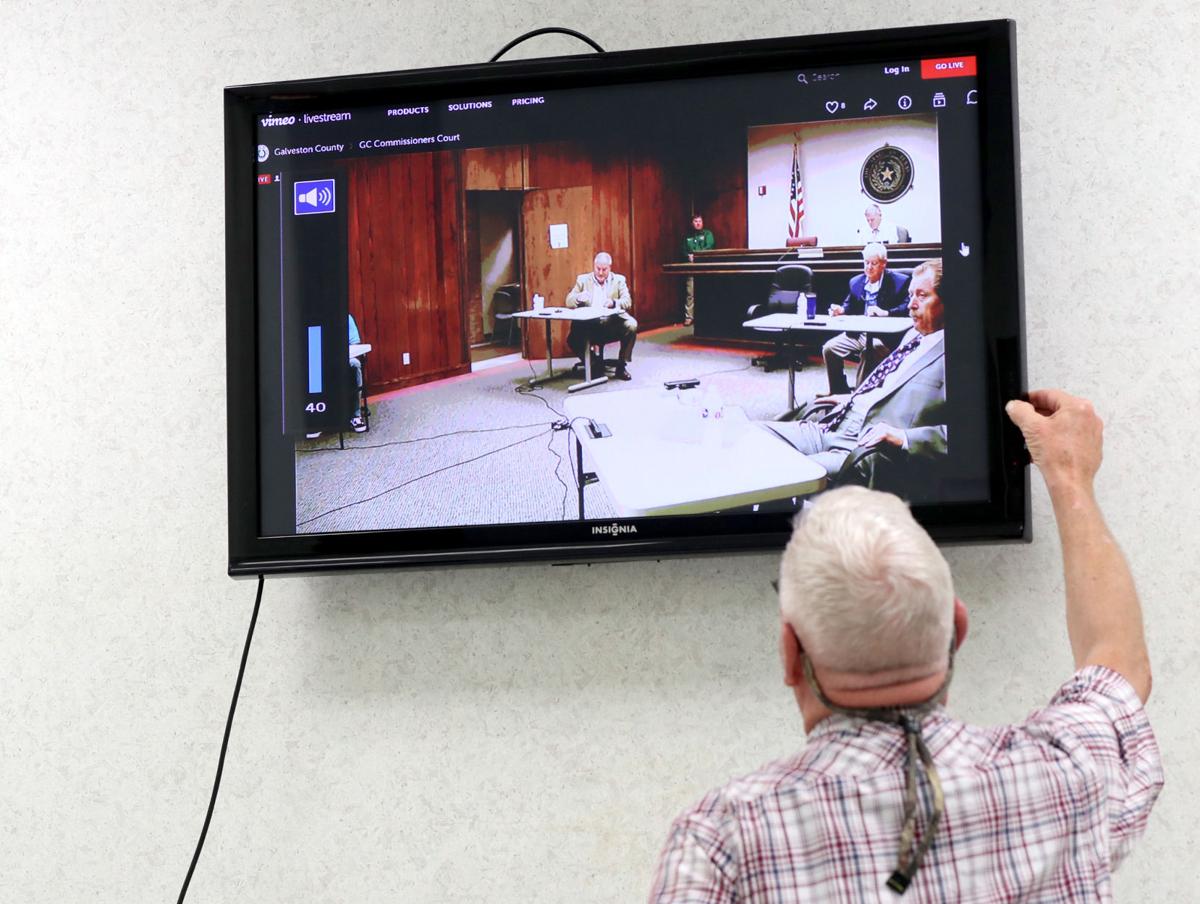 Justice of the Peace for Pct. 2 Mike Nelson adjusts the volume on the live feed of the Galveston County Commissioners Court meeting in the break room at the county annex in League City on Monday, March 23, 2020. To keep in compliance with Centers for Disease Control and Prevention recommendations, the commissioners were spaced six feet apart and only 10 people were allowed in the courtroom at a time. Other county staff were able to watch the preceding from the break room. 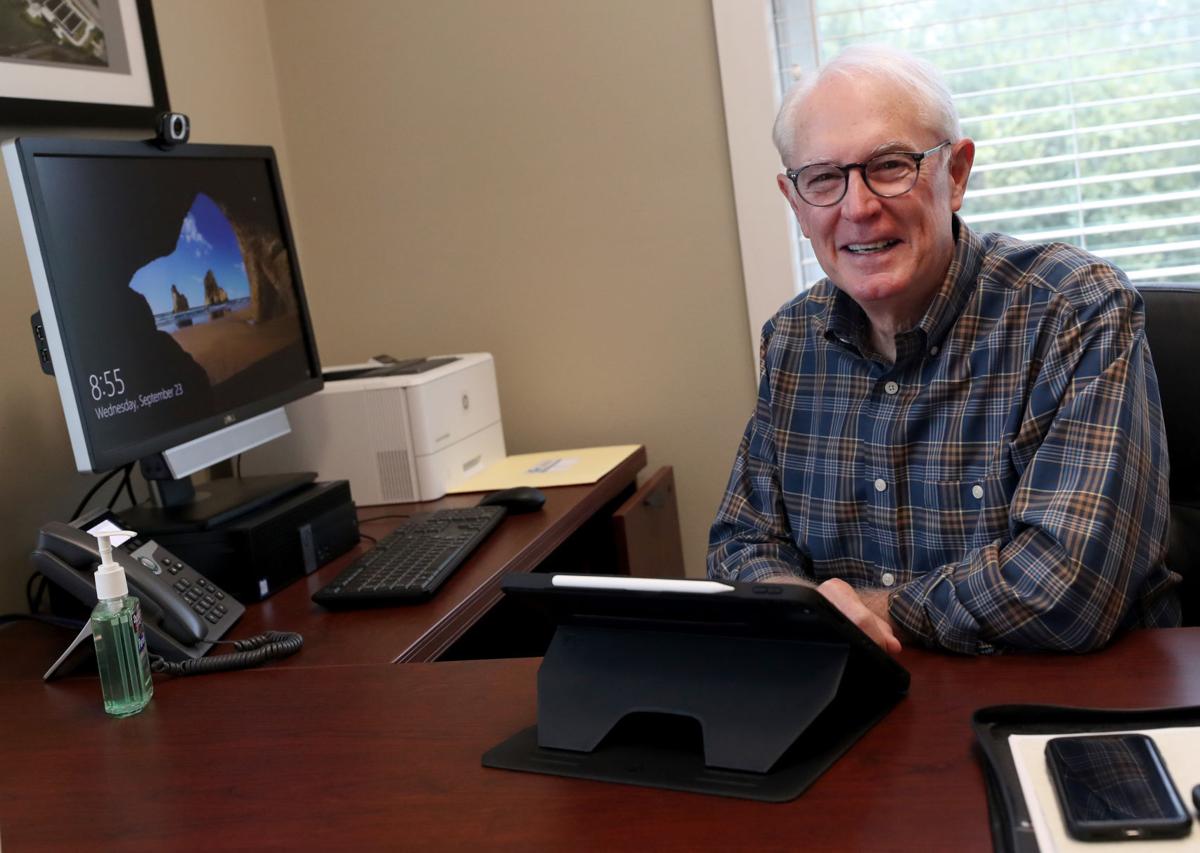 Galveston Mayor pro tem Craig Brown has been acting as the island’s mayor since Mayor Jim Yarbrough stepped down in July. 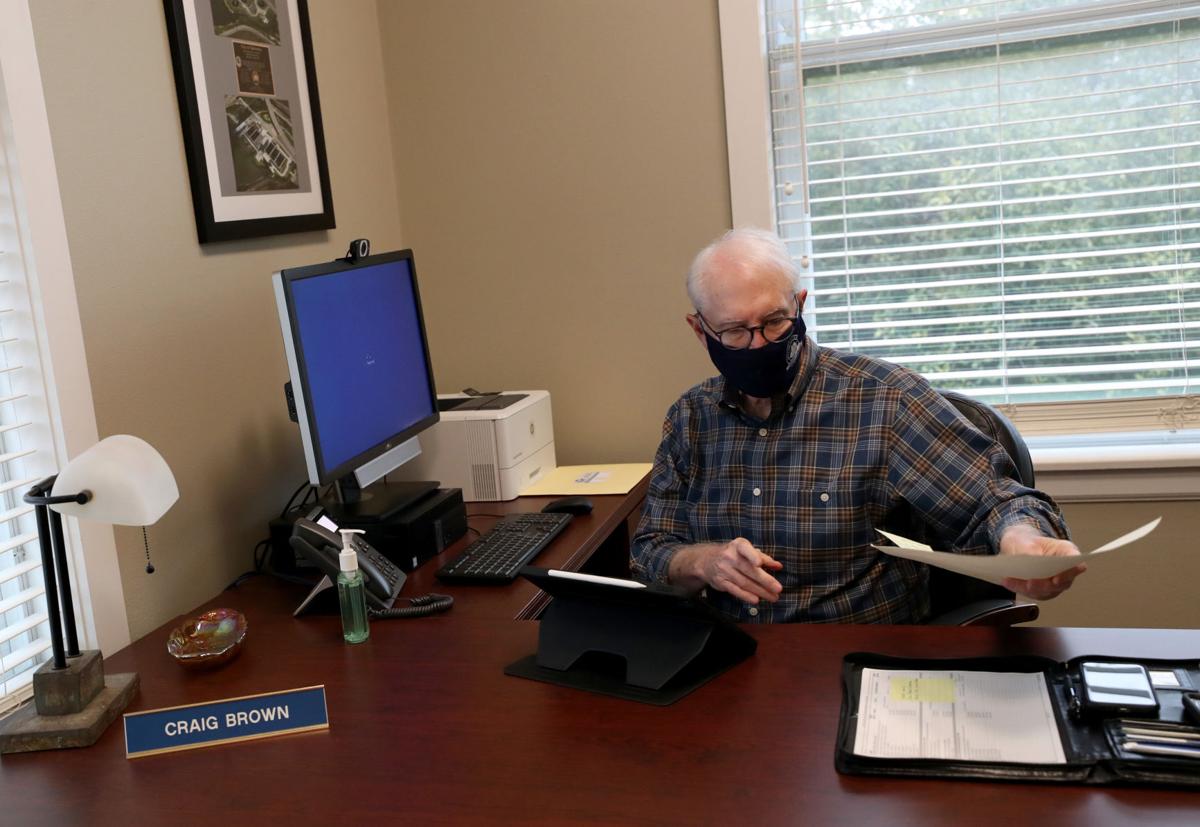 Galveston Mayor pro tem Craig Brown, who is acting as mayor, prepares for a virtual meeting in his office at city hall on Wednesday, Sept. 23, 2020.

Galveston County Judge Mark Henry, left, Commissioners Darrell Apffel, front, and Joe Giusti along with the other commissioners are spaced 6 feet apart during their meeting at the county annex in League City on Monday, March 23, 2020.

Justice of the Peace for Pct. 2 Mike Nelson adjusts the volume on the live feed of the Galveston County Commissioners Court meeting in the break room at the county annex in League City on Monday, March 23, 2020. To keep in compliance with Centers for Disease Control and Prevention recommendations, the commissioners were spaced six feet apart and only 10 people were allowed in the courtroom at a time. Other county staff were able to watch the preceding from the break room.

Galveston Mayor pro tem Craig Brown has been acting as the island’s mayor since Mayor Jim Yarbrough stepped down in July.

Galveston Mayor pro tem Craig Brown, who is acting as mayor, prepares for a virtual meeting in his office at city hall on Wednesday, Sept. 23, 2020.

The scene at the Galveston County Courthouse on Sept. 25 was a study in how government works in 2020.

The regularly scheduled Monday meeting was at the county courthouse in Galveston, and was just the fourth time the court had convened a meeting in the county seat since March.

At the front of the room, a table was set up below the commissioners’ row of desks and a projector streamed live webcam images of Galveston County Judge Mark Henry and another commissioner onto a portable screen.

In the part of the room meant to accommodate the public, which normally sits 100 people or more, a dozen or so chairs were spread out 6 feet apart.

The precautions were similar to those taken in many places during the pandemic. They were meant to keep people safely spaced apart to help avoid catching the COVID-19 virus. But they didn’t exactly make things easy.

The microphones in the room didn’t come through on Henry’s speakers, and every presentation and question from commissioners was met by a scramble of IT staff members to turn volumes up or down or by pantomimes to communicate a vote.

“It was embarrassing,” Henry said, still frustrated about it days later. “A county of our size can’t even set up a Zoom meeting. We better be able to get our IT department to be able to perform, or else we’ll be looking for other IT employees.”

That technology hiccup might end up being one of the lasting legacies on local government caused by the coronavirus pandemic. As precautions forced people apart, governments became more plugged in and broadcasted. Public meetings were held on Zoom or Facebook, and business once confined to a single room was now on social networks.

Beyond public meetings, more county businesses are holding meetings between staff members or conducting transactions with clients online rather than across a desk or counter.

Many expect that change to continue, and some argue it’s an improvement.

“You don’t need to come to our building,” Henry said. “Someone sitting at a computer can easily service 20 to 30 people an hour. Whereas, you’re dealing with someone that has to stand in line, you’re going to cut that efficiency in half.

Maintaining those efficiencies would actually be a positive outcome of the pandemic, Henry said.

“God knows we’ve had very few of those up to this point,” Henry said.

OTHER EFFECTS ON GOVERNMENT

The first case of COVID-19 in Galveston County was identified March 13. Soon after that, like the rest of the country, there were mass layoffs in the private sector and widespread closures. Across Galveston County, officials worried their revenue streams would be choked off and that they too would have to furlough or lay off employees.

But eight months into the pandemic, government leaders say they’re in OK shape.

Property values in the county were calculated before the pandemic hit and continued a years-long trend of increasing.

Local governments subsequently chose to make limited increases to their tax rates; no tax increases were so large that cities needed to ask voters for approval.

Some entities, including League City, Texas City and Galveston County, managed to lower tax rates below last years’ effective rates — essentially promising to collect less money overall from their residents during the next fiscal year.

That’s not to say COVID didn’t leave lasting marks. They’re just legacies that might not be fully appreciated for some time, local officials said.

Galveston County, for instance, took two dozen unfilled positions off its book permanently, effectively reducing the size of the government, without actually firing anyone, Henry said. Those jobs will be added back to the government only on an as-needed basis, Henry said.

The city of Galveston similarly instituted a hiring freeze on unfilled positions. Mayor pro tem Craig Brown said those limits on new employees has made the city “lean and mean.”

“It has shown the city can function with less personnel and with the reorganization of some of our departments and some of our manpower,” Brown said. “We can provide services and not have to have the total number of individuals at city hall that we do know.”

The city of Kemah, which is heavily dependent on sales tax revenues from retail and tourism, laid off police officers and dispatchers, and the city of Hitchcock outsourced its police dispatching to the Galveston County Sheriff’s Office.

COVID-19 hasn’t yet delivered as hard a hit to government revenues and services as some had feared, League City Mayor Pat Hallisey said.

“As long as we continue to grow, we’re in good shape,” Hallisey said. “We were worried to death about the sale tax because of the pandemic. While we didn’t meet our projections last year, our sales tax receipts were up. We don’t have what we thought we were going to get out of there, but we have enough.”

Fallout from the pandemic is still to come, and it remains to be seen how it will affect local governments.

As of August, Texas’ unemployment was at 7 percent, less than the national rate, but still nearly double what it was in August 2019.

The United States is still in a recession, and Henry feared local leaders could be faced with a comeuppance once federal aid and protections, like the ban on rental evictions, run out.

“Loss of jobs, delay of primary health care, the ripple effects are going to have tremendously negative negatives for probably decades,” Henry said.

“The people that haven’t had to pay their rent, we feel for them, but the property owners are still going to have to pay their taxes, and they’re going to come in January and say ‘We weren’t allowed to collect our rent, how are we supposed to pay our property taxes?’ I don’t have an answer to that.”

The pandemic also has brought the potential for a sea of change in the leadership in the county at all levels.

There are 113 items on county ballots for the Nov. 3 election — spanning national, state and local races. At least some of those races seem primed to be affected by peoples’ feelings about the government’s reaction to the pandemic.

In Galveston, some of the shifting of leadership already has taken place, at least temporarily.

In July, three-term Galveston Mayor Jim Yarbrough stepped down from his office before the November election, which had been delayed from May. That left Brown, one of five candidates vying to replace Yarbrough, in charge of leading the city through its next steps in the pandemic response.

For Brown, that has meant leading the discussion on the city’s first pandemic budget, making decisions on when to begin permitting large public events that have not been allowed because of the pandemic and ordering Galveston’s first mandatory hurricane evacuation in 12 years, which came with its own worries about locals catching or spreading the virus as they sheltered off the island.

Brown’s interim position might leave him open to paying at the voting booth for government decisions that are not entirely in his control. By the end of September, with COVID-19 cases at near their lowest point of the year, orders imposed by Abbott were still forcing bars to be closed, and some restaurants, gyms and other businesses were limited to being open at 75 percent capacity.