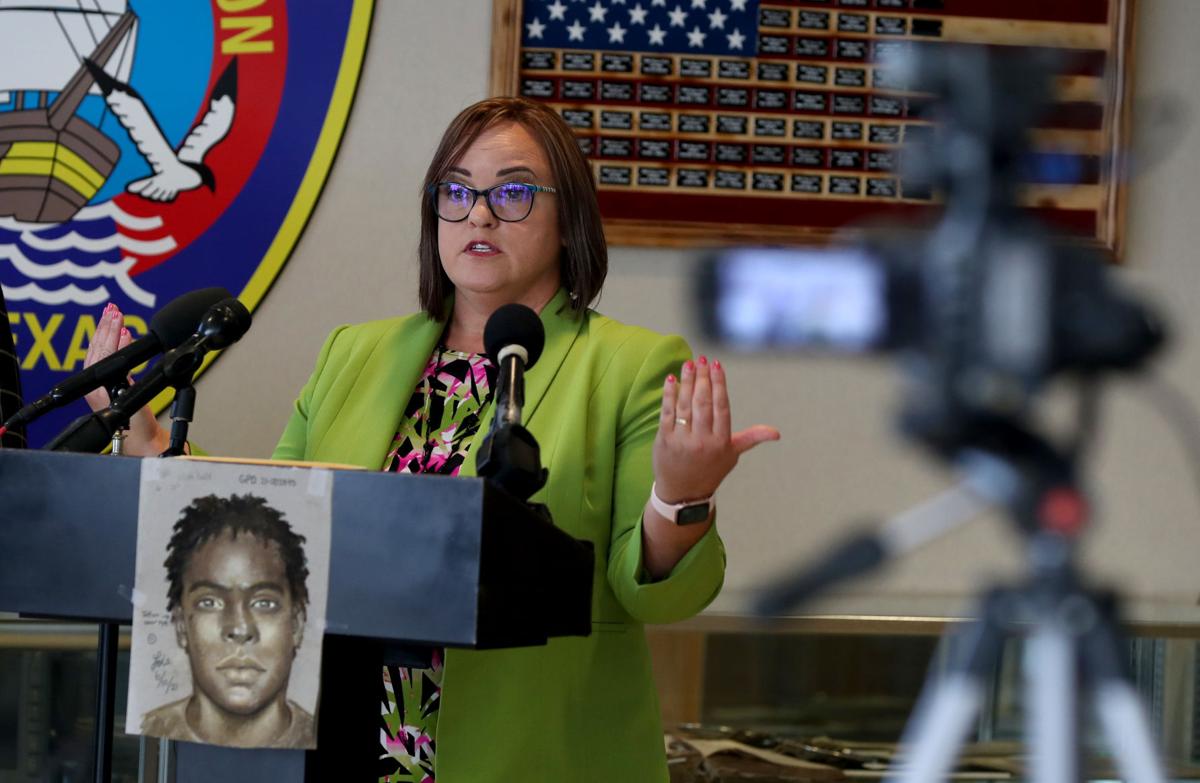 Galveston Police detective Michelle Sollenberger asks for the public’s help in finding the men who robbed and pistol-whipped a woman and her grandson Monday at Kroger, 5730 Seawall Blvd. Galveston police released a composite sketch of one of the robbers during a press conference at the Joe Max Taylor Law Enforcement Center in Galveston on Friday, June 2021. 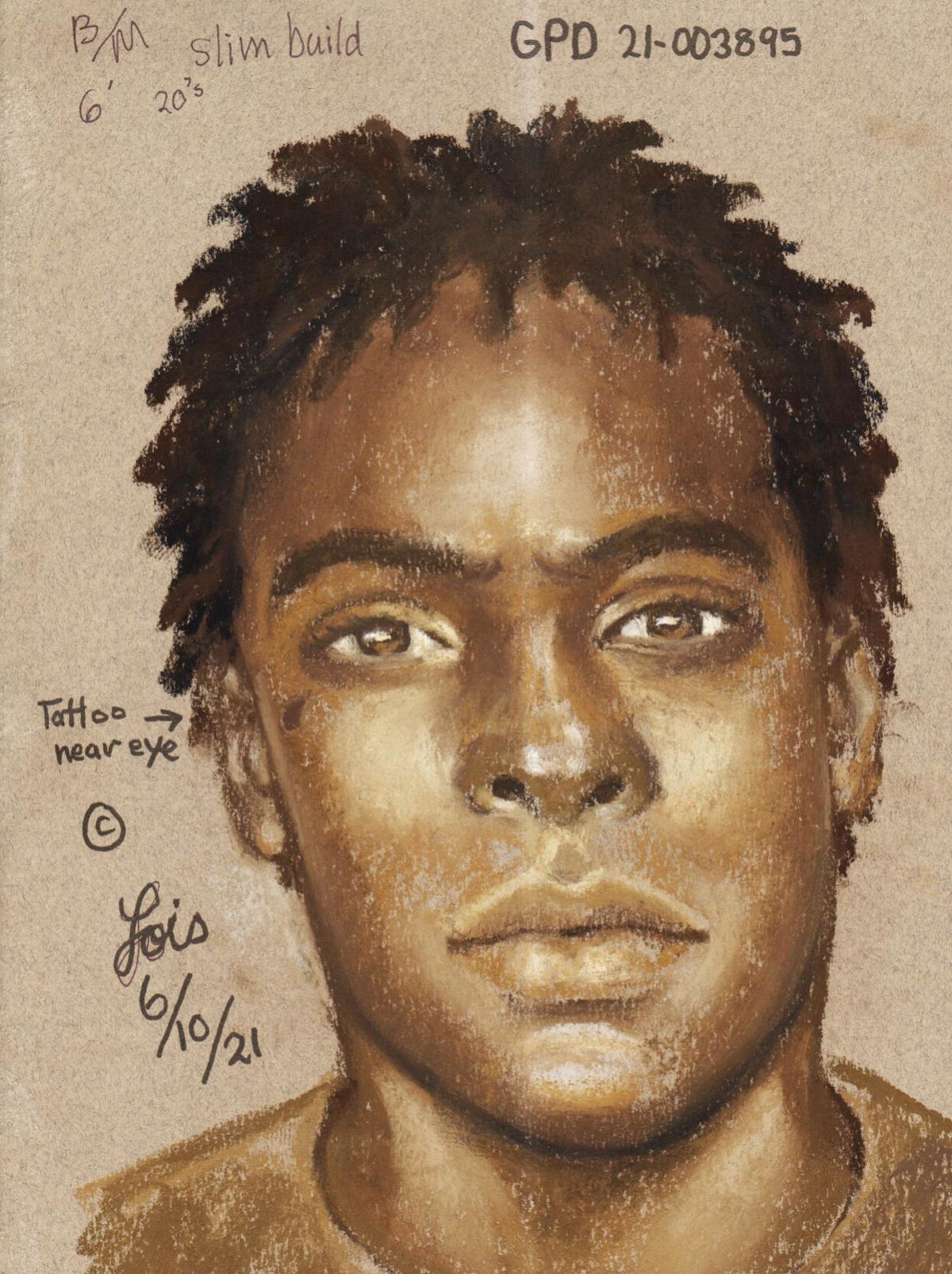 Galveston Police Department investigators on Friday released a composite sketch they said generally resembled an unidentified man who assaulted and robbed two people at a Galveston supermarket on Monday, June 7.

Galveston Police detective Michelle Sollenberger asks for the public’s help in finding the men who robbed and pistol-whipped a woman and her grandson Monday at Kroger, 5730 Seawall Blvd. Galveston police released a composite sketch of one of the robbers during a press conference at the Joe Max Taylor Law Enforcement Center in Galveston on Friday, June 2021.

Galveston Police Department investigators on Friday released a composite sketch they said generally resembled an unidentified man who assaulted and robbed two people at a Galveston supermarket on Monday, June 7.

Four days after a 72-year-old woman and her grandson were beaten and robbed in the parking lot of an island grocery store, the Galveston Police Department called on the public to help identify and capture the two men responsible for the crime.

Detectives on Friday released a composite sketch of an unidentified man and released other details they hope might lead to an arrest.

They also announced that local businesses had created an $8,250 reward for information leading to an arrest and conviction.

The robbery happened at the Kroger supermarket, 5700 Seawall Blvd., about 9 p.m. Monday.

The woman, a visitor who isn’t from Galveston, was leaving the supermarket with her 21-year-old grandson and teenage granddaughter, police said.

As the three reached their car, they were accosted by two men in hooded sweatshirts, police said. The men threatened the woman and grandson with guns, and then struck them both in the head with the weapons, police said.

The woman suffered an injury to her cheek and jaw, police said. The grandson was hit in the back of the head.

The men took a necklace and a watch from their victims, and then fled in what possibly was a white Honda sedan, police said. They were last seen heading north on 57th Street, police said.

Police have made no arrests.

During a news conference Friday, police said they had reviewed dozens of hours of security camera video from the time of the mugging, but the store’s cameras didn’t record the area where the family was assaulted.

The men snuck up on the unsuspecting family, detective Michelle Sollenberger said.

“They sneak-attacked them,” Sollenberger said. “They just kind of popped up on them.”

The victims were grabbed almost simultaneously as they were loading groceries into the car and getting ready to leave.

It’s possible the victims were targeted and followed after the robbers spotted them wearing “flashy” jewelry, Sollenberger said.

The victims asked police not to identify them publicly, police said. The woman was shaken but recovering, Sollenberger said.

A Houston-based artist who met with the victims drew the sketch released Friday. Police cautioned the sketch might bear only a general likeness to one of the men involved in the robbery. Details such as a tattoo on the man’s face might be different from what’s shown in the drawing, police said.

Meanwhile, a group of business owners offered a reward for whoever provides information that leads to an arrest and conviction in the case.

Cole Wallace, an 18-year-old owner of two retail stores on the island, the Bin Store and Steals & Deals, launched the reward effort.

“This could happen to anyone,” said Wallace, who just recently graduated from Clear Springs High School. “I think we all just want to come together as a community and make the island, and the Houston area, a safe place.”

Such violent attacks aren’t common in Galveston, police said. But there are regular instances of criminals targeting tourists and stealing things like purses and cell phones.

“We’re a tourist town and unfortunately a lot of people are preyed upon,” Sollenberger said. “We do see an increase in car burglaries and minor offenses in the summer.”

A different assault on Thursday, which also resulted in three men being arrested and accused of a pistol-whip attack, is believed to be unrelated to the supermarket assault, police said.

Police are asking for the public's help in finding two men who committed armed robbery at Kroger Seawall Boulevard.