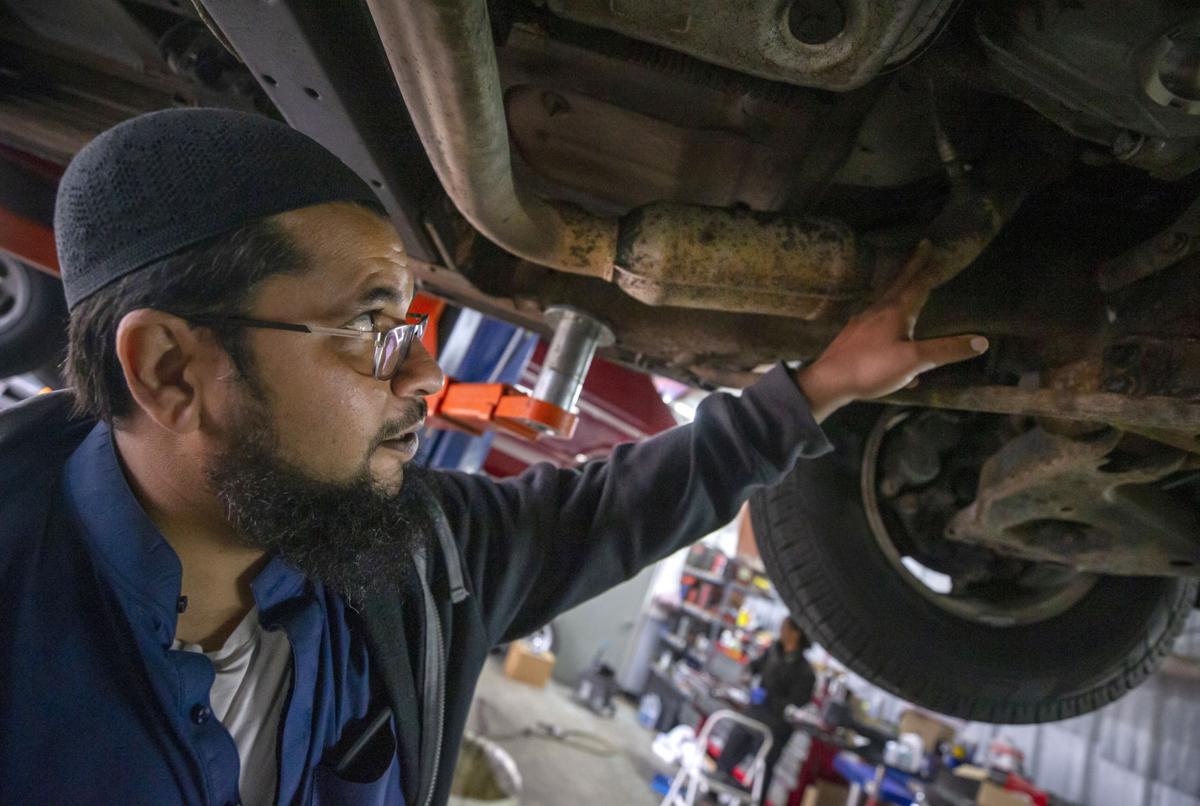 Sam Kayser, owner of Kayser’s Automotive in Galveston, describes on Monday, Dec. 14, 2020, how thieves remove catalytic converters from the exhaust systems of vehicles. 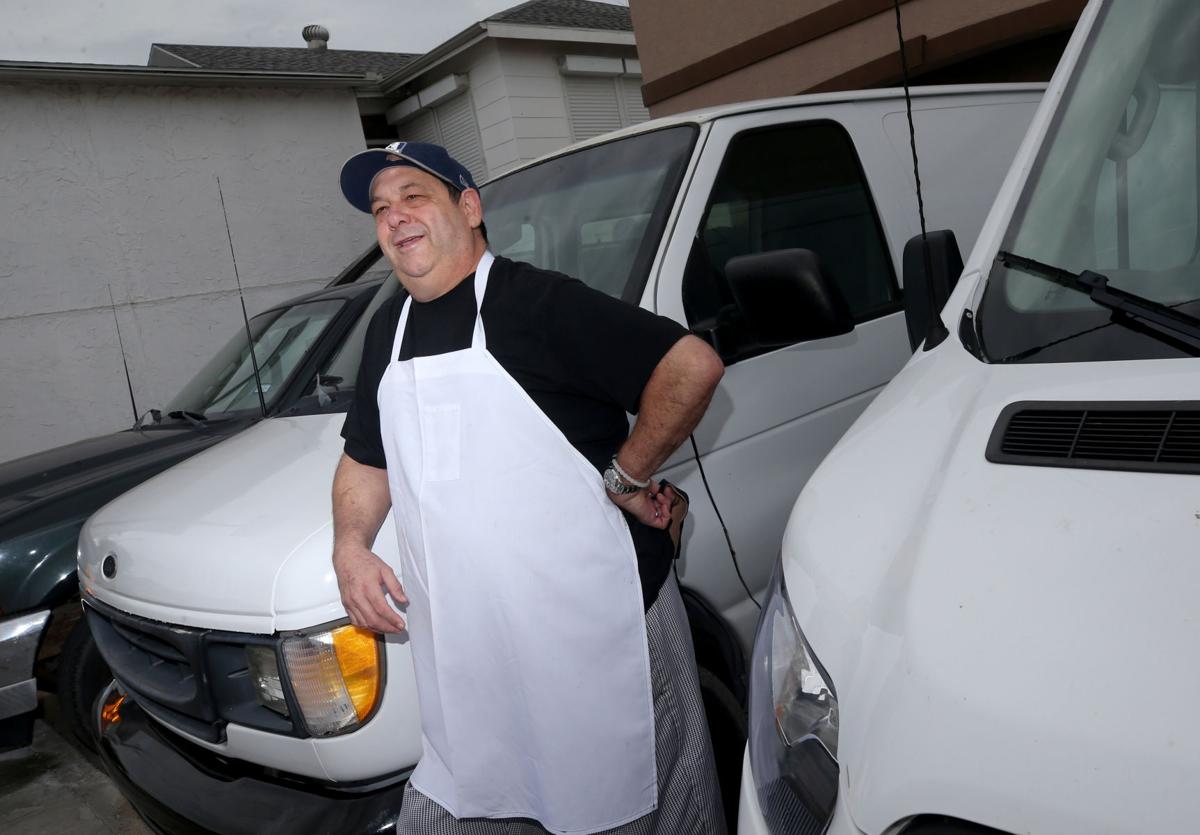 Recently, someone sawed the catalytic converter off of a vehicle owned by Todd Schott, pictured, of Chopin Mon Ami Catering and Easy2GoMeals, 4417 Ave. S in Galveston. 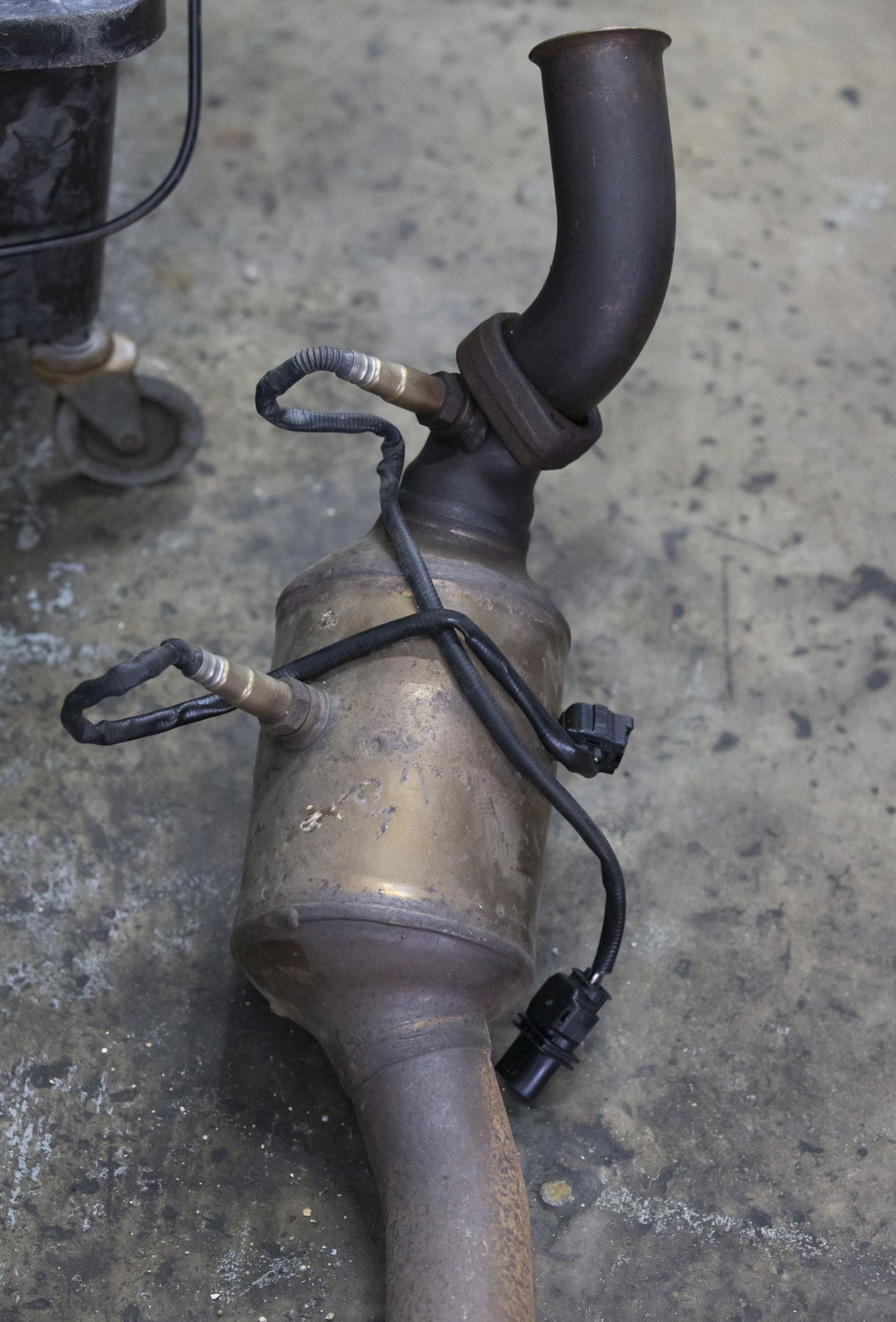 A catalytic converter rests on the floor of the garage at Kayser’s Automotive in Galveston on Monday, Dec. 14, 2020.

Sam Kayser, owner of Kayser’s Automotive in Galveston, describes on Monday, Dec. 14, 2020, how thieves remove catalytic converters from the exhaust systems of vehicles.

Recently, someone sawed the catalytic converter off of a vehicle owned by Todd Schott, pictured, of Chopin Mon Ami Catering and Easy2GoMeals, 4417 Ave. S in Galveston.

A catalytic converter rests on the floor of the garage at Kayser’s Automotive in Galveston on Monday, Dec. 14, 2020.

Island caterer Todd Schott arrived at work one morning last week to find his van had been burglarized.

It wasn’t the typical auto burglary, however, like the smashed windows and ransacked glove boxes vehicle owners often experience in Galveston and elsewhere.

Someone had crawled under the van and cut off a piece of its exhaust system. The catalytic converter, a device that reduces pollution emitted from gasoline engines, was gone. It had been taken clean off, he said.

Schott posted his plight on social media and was surprised to learn he wasn’t alone.

“I had so many people comment on it,” Schott said. “It’s an epidemic and not just here in Galveston.”

Indeed, catalytic converter theft is a nationwide problem and seems to be trending up. Enterprising thieves armed with battery-powered tools have targeted vans and trucks from Oxnard, California, to Chattanooga, Tennessee, to Manchester, New Hampshire, to cite a few.

Their goal is the rare metals that can be found in converters, including platinum, palladium and rhodium. The metals react to carbon monoxide emissions and turn them into harmless carbon dioxide, steam and nitrogen.

The exact reason for the recent rash of thefts is unclear, although market forces could be at work. In late November, The Wall Street Journal reported that the price rhodium, one of the planet’s rarest metals, was soaring to record heights.

The reason: Car makers are trying to respond to a demand for lower-emission vehicles.

Police reports back up the social media rumors of a catalytic crime spree. Last week, the University of Texas Medical Branch reported catalytic converters had been taken from three of its fleet vans, a spokesman said.

The Galveston Police Department also confirmed it had received five reports about similar thefts but had not made any arrests in connection to the recent spree.

It’s not the first time car parts have been targeted for their value as scrap, said Lt. Tommy Hansen, the director of the Galveston County Auto Crimes Task Force.

“It’s going on all around the county,” Hansen said. “We’ve seen people get their cars cut while they’re in Walmart. It’s not an uncommon thing. It was for a while, but it now seems to be a trend.”

He noted that all kinds of vehicle crimes are “through the roof in Texas.” He connected that rise to COVID-19 and people taking advantage of more opportunities to commit crimes, Hansen said.

The Galveston Police Department suggested people try to prevent such thefts by parking vehicles in garages and marking their converters with serial numbers and other identifiers. People could also ask mechanics to weld bolts holding the converter in place or buy products that lock them on to their vehicles.

As for Schott, he wasn’t sure what he could tell people about being victimized like he was.

He paid $500 to replace his converter after learning insurance wouldn’t cover the theft.

At the very least, he hoped people who are victims would report incidents to the police in the hopes of catching the thieves before they can strike again.

The scrap yards that buy them should know they’re stolen.

I'm curios as to why insurance wouldn't cover the theft. Was it related to the type of coverage or the deductible?

Etched serial number on the catalytic converter for registration & traceability should minimized theft.