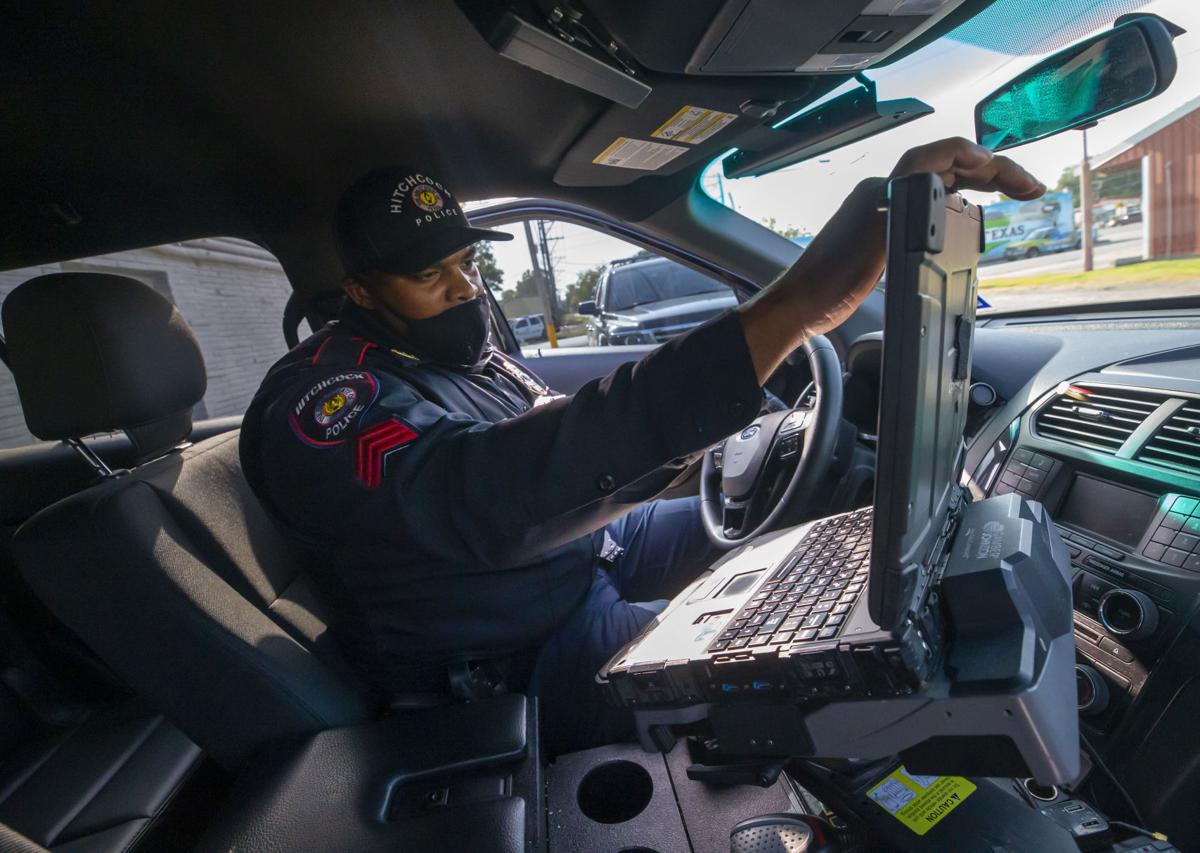 Hitchcock Police Sgt. Jason Walker activates his in-car computer before heading out on duty in Hitchcock on Thursday, July 16, 2020. 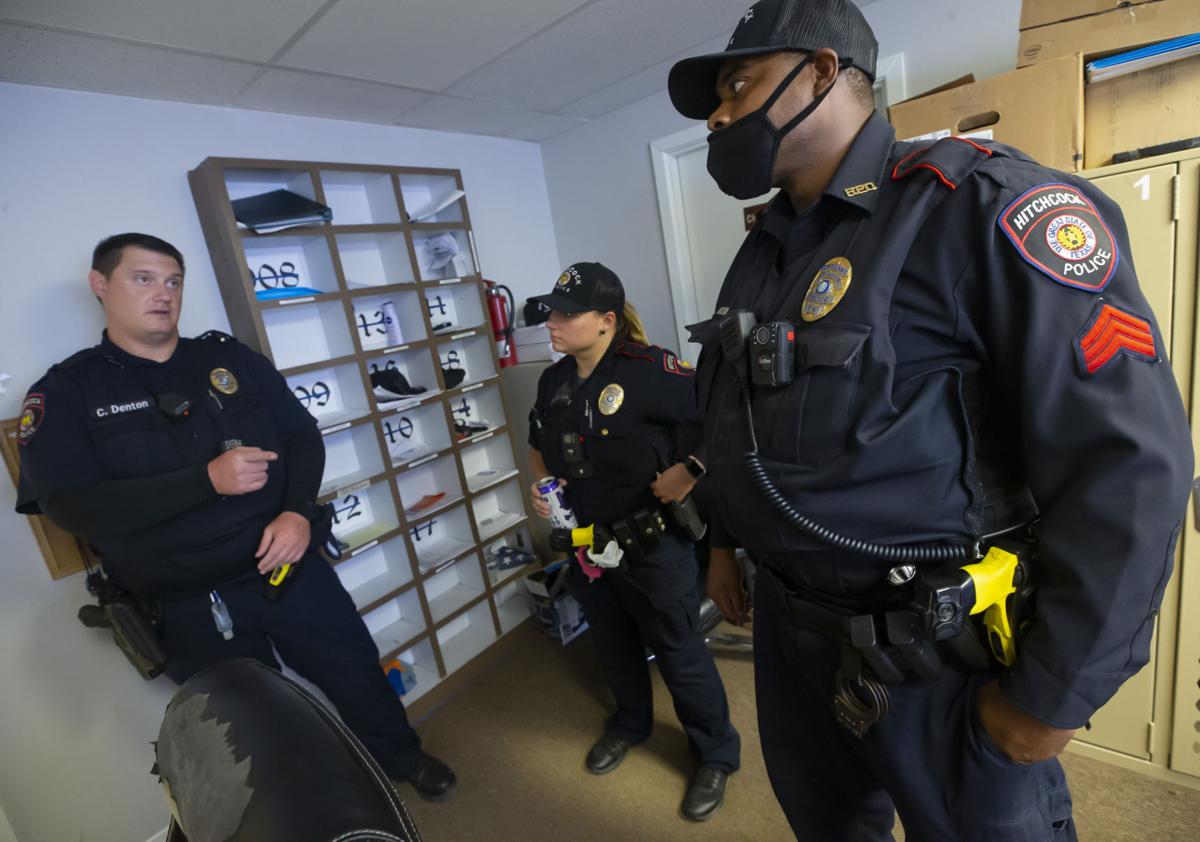 Hitchcock Police officers, from left, Codie Denton, Michaela Tinsley and Sgt. Jason Walker speak about the day’s activity during a shift change at the police department in Hitchcock on Thursday, July 16, 2020. 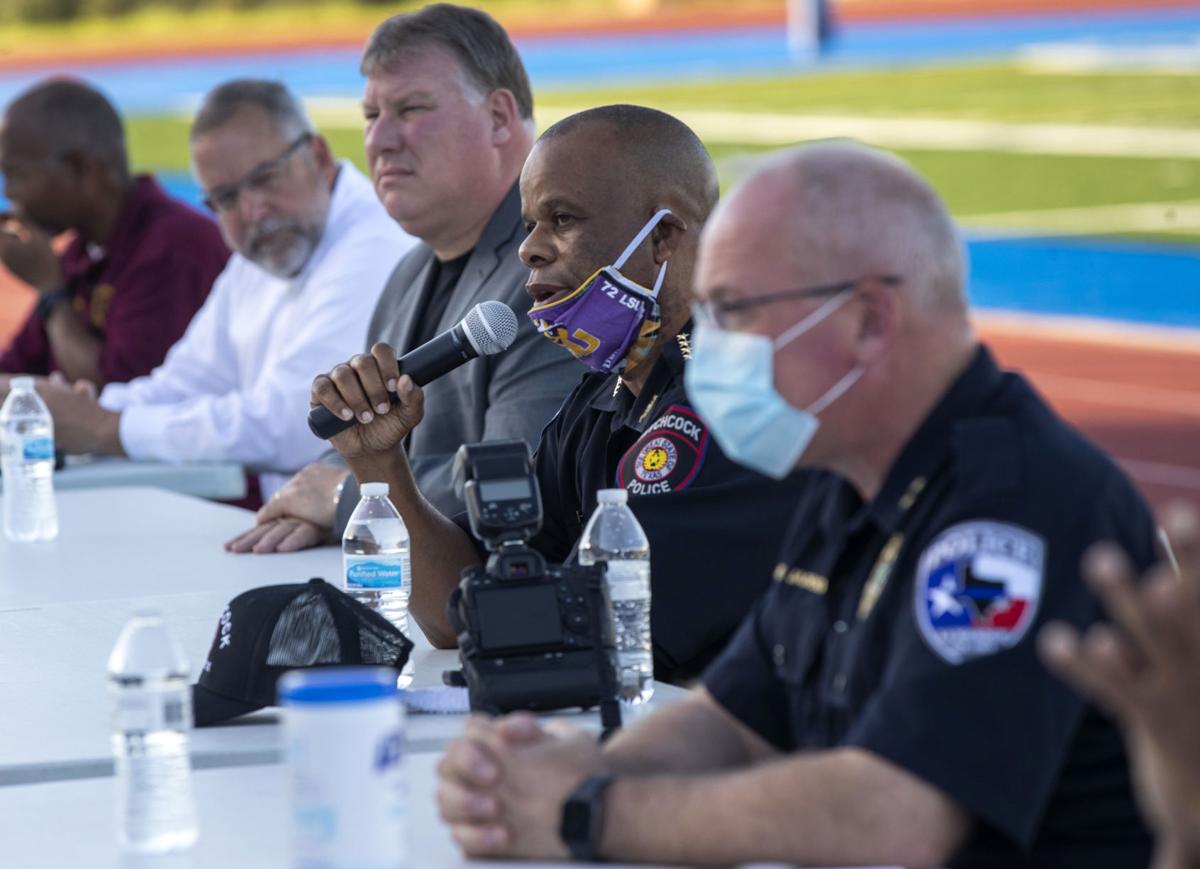 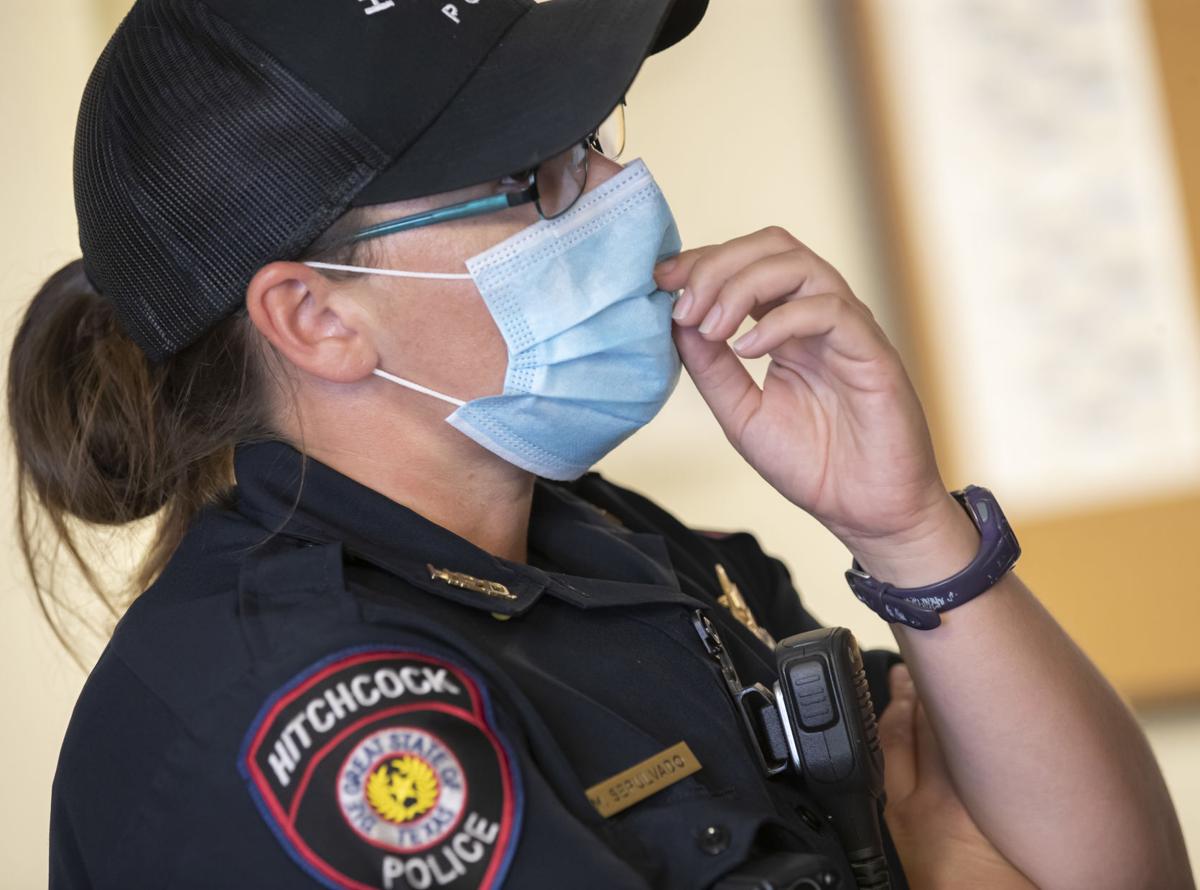 Hitchcock Police officer Meagan Sepulvado listens to a briefing on the day’s activity during a shift change at the police department in Hitchcock on Thursday, July 16, 2020. 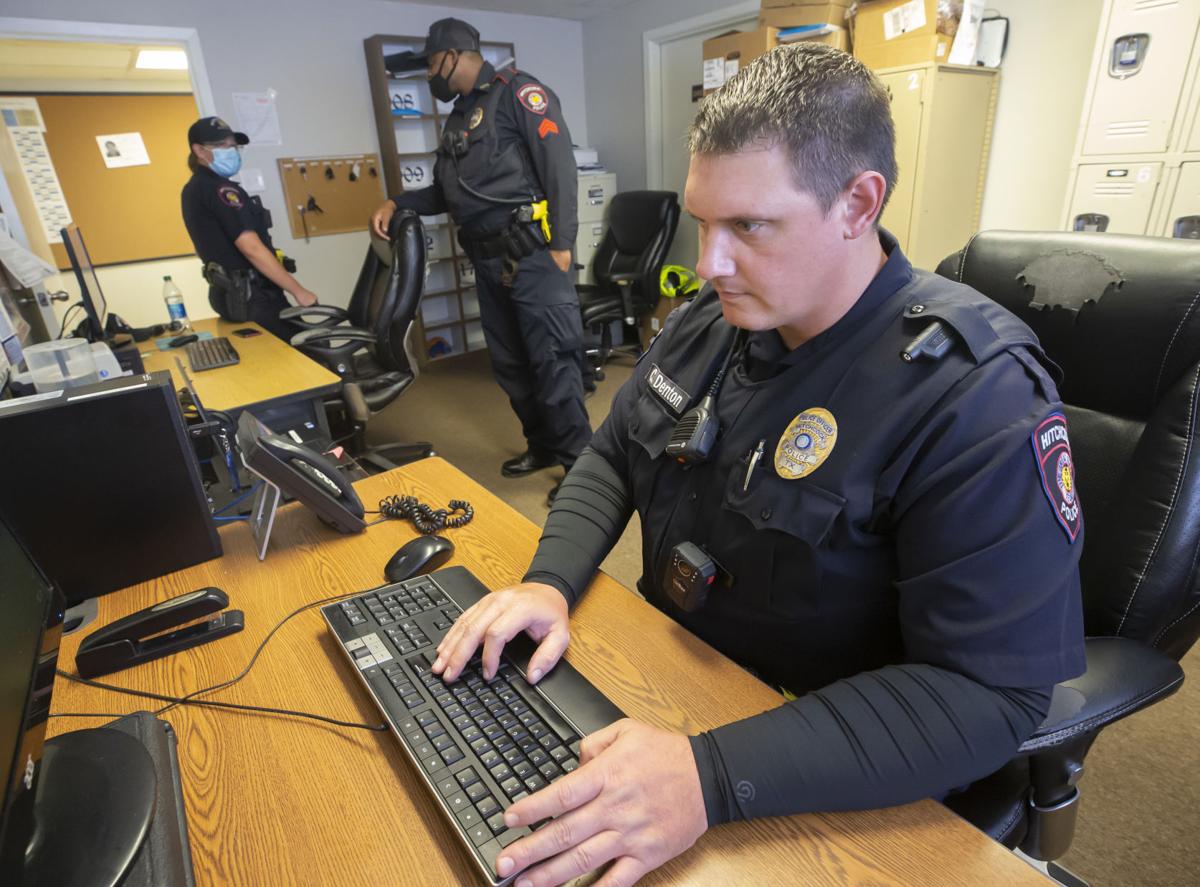 Hitchcock Police officer Codie Denton logs paperwork during a shift change at the police department in Hitchcock on Thursday, July 16, 2020.

Hitchcock Police Sgt. Jason Walker activates his in-car computer before heading out on duty in Hitchcock on Thursday, July 16, 2020.

Hitchcock Police officers, from left, Codie Denton, Michaela Tinsley and Sgt. Jason Walker speak about the day’s activity during a shift change at the police department in Hitchcock on Thursday, July 16, 2020.

Hitchcock Police officer Meagan Sepulvado listens to a briefing on the day’s activity during a shift change at the police department in Hitchcock on Thursday, July 16, 2020.

Hitchcock Police officer Codie Denton logs paperwork during a shift change at the police department in Hitchcock on Thursday, July 16, 2020.

Hitchcock is the city of the future in the mind of Sam Collins III, a well-known member of the community and a longtime resident.

At first glance through the community of about 7,900 residents splayed out largely along state Highway 6, it might be hard to see what Collins is talking about.

But when it comes to having a diverse police department, Hitchcock may, in fact, lead the way.

Leaders in police departments across the country are taking note of the lack of diversity among their ranks, especially after protests erupted nationwide after the death of George Floyd and others at the hands of police officers.

In five Galveston County cities reviewed by The Daily News — League City, Galveston, Texas City, La Marque and Hitchcock — the racial makeup of the police departments is whiter than the city population as a whole.

It’s an issue that some departments say they are making efforts to correct.

The La Marque Police Department, for instance, has begun making a concerted effort to encourage Black applicants. The department of some 34 full-time officers, of whom only three are Black, operates in a city where Black residents make up roughly a third of the population of about 17,000, Chief Kirk Jackson said.

It’s not alone, however, according to national experts. Police departments everywhere are just not as diverse as the communities they represent, said Maria B. Velez, an associate professor in the department of criminology and criminal justice at the University of Maryland.

“In my research, I’ve found that if a department’s demographics are representative of the place it’s representing, then that translates into a variety of good outcomes,” Velez said.

One such positive outcome is departments that reflect the diversity of their communities foster a greater sense of trust, Hitchcock Police Chief Wilmon Smith, one of three Black police chiefs in Galveston County, said.

“When people see an individual that looks like them, then it gives them the OK to relate and talk to this person,” he said. “Those differences and similarities can sometimes play a role in whether or not we get information or bond with a particular person.”

“You look at the African-American community and a lot of the historic issues they’ve had with police, this is not a job that’s first on a lot of their lists,” he said. “A lot of recruiting has to come through outreach. Departments have to be willing to reach out and explain what’s going on, and ask why they don’t apply.”

When Smith first became a trooper with the Texas Department of Public Safety in 1986, he can remember having conversations with the first Black trooper in the state, who began his career in 1970, he said.

“I was only 16 years removed from the first African American hired in the state,” he said. “There was a time there were so few of us, we all knew each other. Over the years, those numbers are getting better. But I guarantee they’re still horrible.”

Other departments in Galveston County have begun that outreach. In La Marque, for instance, Jackson is working with a group of young activists who spent their childhood in La Marque to address a departmental deficiency in Black officers.

Galveston County community leaders this week largely praised departments’ efforts to diversify their ranks but also acknowledged that can’t be the only thing police leaders do.

“There’s a lot of work to be done,” said Wayne Hobgood, vice president of the African-American Historic Preservation Committee or 1867 Settlement in Texas City. “It’s not just about policing and hiring diverse police officers. A great thing would be more people specifically from the community.”

If departments, for instance, hire officers from the other side of Houston, they might not understand specific cities and communities in Galveston County, Hobgood argued.

“It’s not just saying, ‘Hey, if we hire anyone Black, that will solve the problems going on in the community,’” said Derrick Lewis II, a youth and college field organizer for the NAACP. “It’s deeper than that. It’s really looking at and thinking about how to do police reform.”

Collins agreed. Department diversity needs to be the first of many steps, he said.

“It’s not just looking like the community,” he said. “Some minority officers are harder on their communities than white officers. We want the right temperament.”

Smith doesn’t want people to get too caught up in the numbers, he said. Ultimately, police departments are trying to diversify their ranks with quality officers.

“I want to make sure that in recruiting, we are recruiting quality applicants,” he said.

La Marque has had some difficulties filling open positions with Black officers over the years, Jackson said. Civil service laws require the department to only consider applicants who have taken a certain test, he said.

It’s time police departments have tough conversations about how to proceed, she said.

“These are pipeline issues,” she said. “We face it in academia as well — why are there not more people of color? They’ll say there aren’t any applications. But then what are you doing, what’s the system doing, earlier on that’s producing a lack of applications?”

In five Galveston County cities, the racial makeup of police department are whiter than the city population as a whole. In some cities, recruiting more minority officers is becoming a point of emphasis and is seen as a way to improve community relations.

I imagine that the lack of people of color "in the pipeline" reflects the historically toxic nature of the relationship between police and communities of color. When I was a kid, we were taught that cops were heroes - but the images we saw on TV of the beatings, dogs, and water hoses being deployed against civil rights activists in the south was anything but heroic. I remember the murder of 12 year-old Santos Rodriguez in Dallas, and the riot that followed, like it was yesterday - even though it was almost 50 years ago. That history - and the history before and after - has created a chasm that separates minority communities from the law enforcement community. I hope that a new generation of black and brown men and women will be the real heroes, and step across that chasm by becoming law enforcement officers, to protect and serve the residents in their own cities and towns.

This will be good for all communities. A recent Texas A&M study of police in two Texas cities found that white officers use force 60 percent more than black officers, and use gun force twice as often. While white and black officers discharge their guns at similar rates in white and racially-mixed neighborhoods, white officers are five times as likely to fire a gun in predominantly black neighborhoods. Less police violence is a good thing. More community based policing is a good thing.

I applaud the efforts to help educate our community and explain the value of education so that we can continue to use the model of "most competent" when hiring and/or promoting. It is great to work to ensure more individuals become more qualified, skilled, and complete whatever tests are required to fill a job.

What is a bit concerning is that we seem to be shifting to a "demographically based competency (DBC).” Our efforts should be more effectively focused educating our community on the value of becoming "most competent." Just my thoughts.

If Black and Hispanic are capitalized, why is white in lower case?

On the US Gov census 2020 pages on ethnicity, White is capitalized along with Black, Hispanic, American Indian and so forth. I'm with the GOV on this one - if you capitalize one, you capitalize all. Isn't that the long term goal - everyone is treated equally?

That sounds reasonable to me.