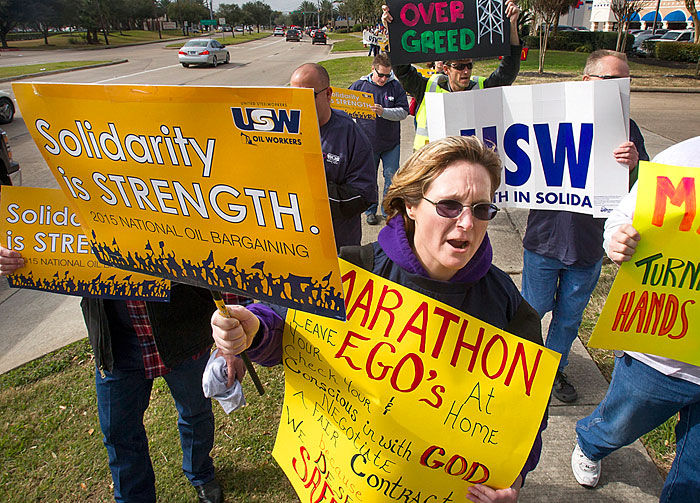 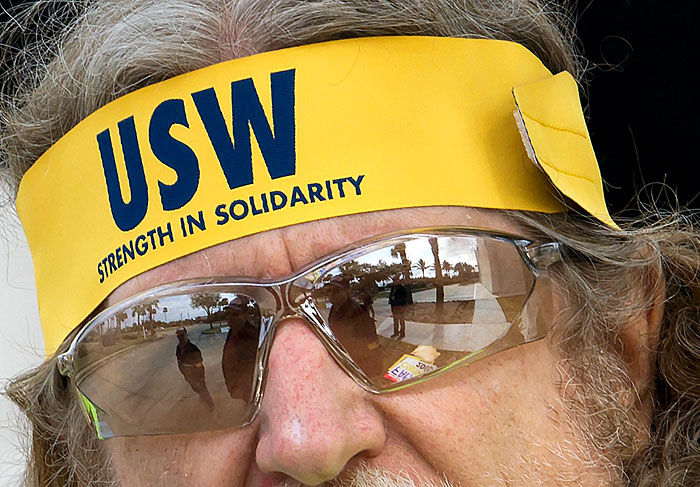 Longtime Marathon employee Greg Lahner wears a United Steelworkers armband on his head during a protest in League City Saturday, Jan. 31, 2015. The group is protesting the company's rescinding of their labor agreement. STUART VILLANUEVA/The Daily News 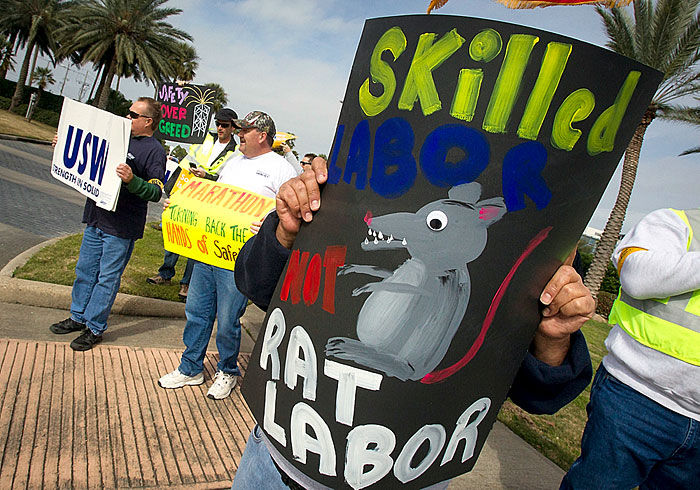 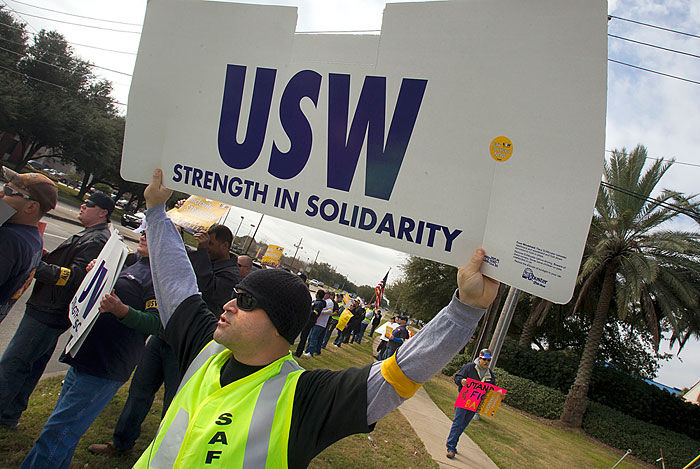 Robert Ramirez and other members of the Members of the United Steelworkers march in League City Saturday, Jan. 31, 2015 to protest Marathon's rescinding of their labor agreement.STUART VILLANUEVA/The Daily News 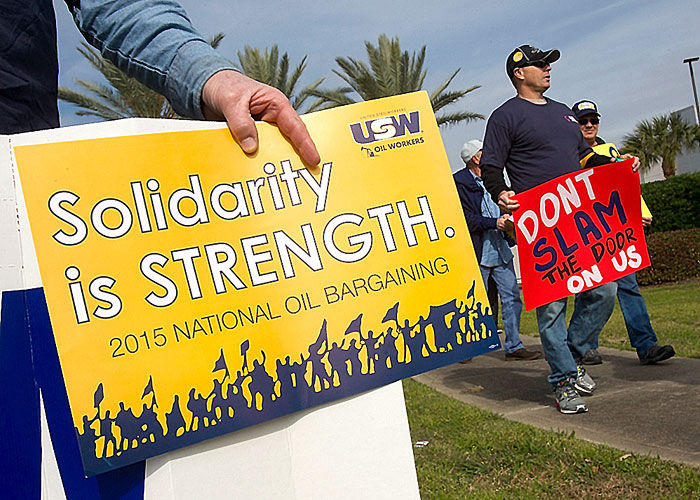 Members of the United Steelworkers and their families march in League City Saturday, Jan. 31, 2015 to protest Marathon's rescinding of their labor agreement. STUART VILLANUEVA/The Daily News 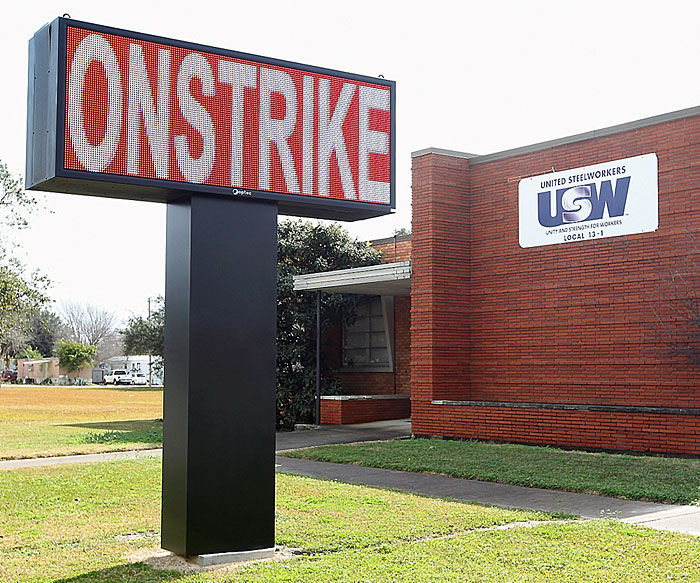 Rodger Webb pickets in front of the Marathon Galveston Bay Refinery in Texas City on Sunday. More than 1,100 Galveston County oil refinery workers are on strike after contract negotiations between United Steelworkers and oil refiners failed.

By Jennifer Reynolds
1 of 6

Longtime Marathon employee Greg Lahner wears a United Steelworkers armband on his head during a protest in League City Saturday, Jan. 31, 2015. The group is protesting the company's rescinding of their labor agreement. STUART VILLANUEVA/The Daily News

Robert Ramirez and other members of the Members of the United Steelworkers march in League City Saturday, Jan. 31, 2015 to protest Marathon's rescinding of their labor agreement.STUART VILLANUEVA/The Daily News

Members of the United Steelworkers and their families march in League City Saturday, Jan. 31, 2015 to protest Marathon's rescinding of their labor agreement. STUART VILLANUEVA/The Daily News

The information in this report includes updates on the latest information available including an update on BP's Texas City Chemical plant, which is also a part of the contract talks.

TEXAS CITY — More than 1,100 Galveston County oil refinery workers are walking off the job after talks between oil refiners and the United Steelworkers failed to resolve differences in a new labor deal.

A 12:01 a.m. Sunday deadline came and went as negotiators with the USW sent a message to members that the latest offer from oil companies was "insulting and fails to address issues that matter to members."

According to the Associated Press and other media reports, Royal Dutch Shell, the lead oil company in the national oil talks, would not comment on the details of labor negotiations.

It also includes Marathon's co-generation plant, which is located next to the massive refinery. Workers there also went on strike.

The contract also covers BP's Texas City Chemical plant, but a strike order was not issued for that facility.

The remaining USW-represented refineries and oil facilities are operating under a rolling 24-hour contract extension.

It was unconfirmed how many workers nationally would go on strike Sunday. But the contract covers about 30,000 workers nationwide at refineries that produce about two-thirds of the country's refining capacity.

"The strike is on," read a text from USW Local 13-1 President Lee Medley in response to an inquiry from The Daily News a few minutes after the deadline passed.

Workers at Marathon's Texas City GBR refinery were in the process of "transitioning" from working their shifts to walking off the job Medley said.

Normally, a walkout would be preceded by union workers working with company officials to shut down operating units. That did not appear to the case in Texas City where Medley said Marathon officials planned to keep units running under the control of salaried employees.

Marathon's salaried workers, who are not covered under the union contract, had been shadowing hourly workers for weeks in anticipation of a strike, union officials confirmed.

Some union members gathered at the union hall at about 11 p.m. Saturday in preparation to start picketing Sunday morning. Some of Texas City's USW members walked a small picket line just after 12:01 a.m. Sunday, but left to regroup for a coordinated picket Sunday morning.

By sunrise several USW members were picketing across the street from the Galveston Bay Refinery and Cogeneration facility.

As contract talks continued earlier in the day Saturday, more than 100 supporters and members of the USW lined the side of the road at the intersection of South Shore Harbour Boulevard and Marina Bay Drive in League City.

Wearing USW shirts and bright green reflective safety vests, protesters held signs asking for fair contracts, and said “Shame on You” to Marathon “for masking their lack of concerns for families.”

Charleztta Lahner stood alongside the road with her two young children in support of her father-in-law, Greg Lahner, who has worked for the company for almost 30 years, she said.

“If this leads to a strike and a work stoppage, we wouldn’t be prepared,” Lahner said. “It would be really tough, but it’s something we have to do.”

Elizabeth Brooks, who has worked for the company for eight years, echoed Lahner’s sentiments that it would be very difficult to strike, but she was willing to do whatever it takes.

“This won’t just impact me and my family, but the entire community,” Brooks said.

There were also pro-union workers lining the parade route of the Mardi Gras Mainland parade in Texas City on Saturday.

Medley said union officials have done everything they can to prepare people for the effects of a work stoppage. Earlier in the week national USW officials said a strike probably was necessary to win concessions from the oil refiners.

A message sent to Texas City union members Friday reminded them to clean out their work lockers before the contract expires. Picket signs and other strike-related items were ready at the USW union hall on Texas Avenue in Texas City.

Marathon officials have steadfastly declined to comment on local negotiations. They insisted, though, that even with a walkout the safe operation of the refinery was "the top priority."

The work stoppage at Marathon’s Galveston Bay Refinery is the first at that refinery in 35 years, when it was previously an Amoco facility. The 123-day strike that ended on May 11, 1980, saw 1,300 workers walk the picket line.

Union members said one of the reasons for Saturday morning’s rally was to show support of both the local and international bargaining that was taking place in League City and in Florida, said Sonny Sanders, subdistrict director of United Steelworkers Union.

The national oil talks happen every three years and are divided into two parts. The national negotiations are led by the United Steelworkers and the oil refiners are represented this go-round by Royal Dutch Shell. The local portion of the contract is handled on a refinery-by-refinery basis. In the case of Texas City, Marathon Petroleum’s Galveston Bay Refinery has been at odds with local union officials for months.

As of Saturday night, five proposals had been made by Shell, but all of them had been rejected for being “woefully inadequate,” Sanders said.

“Shell refused to provide us with a counter-offer and left the bargaining table,” USW International President Leo W. Gerard said. “We had no choice but to give notice of a work stoppage.”

"We remain committed to resolving our differences with the USW at the negotiating table," said Shell spokesman Ray Fisher in a statement earlier in the day Saturday.

Even if national oil talks had reached an agreement, local level talks at Marathon have been contentious.

USW Local 13-1 members said they protested the “death” of a long-standing labor partnership agreement between the workers and management at the city’s largest refinery, which employs more than 2,500 people, many of whom are union members. Marathon Petroleum canceled the agreement in December.

About 1,100 USW members are employed at Marathon’s Galveston Bay Refinery.

The agreement provided a way for the two sides to work out issues related to work performed at the refinery that will now become part of the collective bargaining negotiations, Sanders said.

“When you look at our industry, people see money, but we see safety,” Medley said. “Our people live in these communities.”

The contract talks come at a time when falling oil prices have been leading to massive layoffs and oil exploration project cancelations.

Talks between the United Steelworkers and Shell Oil Co. are scheduled to resume Wednesday, officials said.

You're right. The United Steel Workers put out videos touting the benefits of the ACA (Obamacare) and urged their membership to re-elect Obama in 2012 (all documented). Now their membership is striking over increased premiums and co-pays. I wish someone could have warned the rank and file membership what the ACA would really do - wait a minute, WE DID!

Unions are no longer needed as tomorrow is no longer yesterday. If everyone knew how much the Marathon employees were being paid they would have little sympathy. Oh, thanks, United Steel Workers for the ACA. I hope it affects your family as it has mine.

"as yesterday is no longer tomorrow'.

I love the ACA. Keep your kids on your insurance until they are 26. Alot of us have children who haven't found their own way or finished school by 26 so this is good. It puts limits on your out of pocket expenses, I believe 9200 a year for family coverage. No maximum on coverage. Before if you had a million dollar max and if a family member had cancer or some other serious disease you could hit that fast. No exclusion for pre-existing conditions. If you or someone on your family had cancer or heart problems or diabtetes now you have no fear of changing jobs or coverages. and the two best things are that it requires everyone to have some type of coverage, so that the folks with insurance are not paying more for services because of the folks who don't have insurance. The other is that now the folks who are on strike can attain some type of coverage for their families.

As far as the wages and bargaining piece obviously you know nothing about the issues or collective bargaining or the reason the folks in those refineries make what they make. If you would like to discuss you could stop by the union hall on Texas Avenue in Texas City and ask one of the officers there to explain it you. I am sure they would be more than happy to educate you on the issues that are in play here.

"A rising tide lifts all boats" If the union negotiates a safer place to work with better benefits it affects all business dealings and raises the bar for everyone. Although I value your comments and respect your right to air them. I respectfully disagree with what has been posted below.

LOL! Your second paragraph is totally undercut by your first. Forcing insurance companies to provide coverage for a 25 year old CHILD is what is wrong with this country. Give me a break.

"Alot of us have children who haven't found their own way or finished school by 26 so this is good. "
THIS is good?????
They need to grow up! No wonder so many young people vote they way they do. They replace mama and daddy with the government. Better hope they move out before you retire.[unsure]

Have you dealt with a Marathon ?

Those Rats got skills .