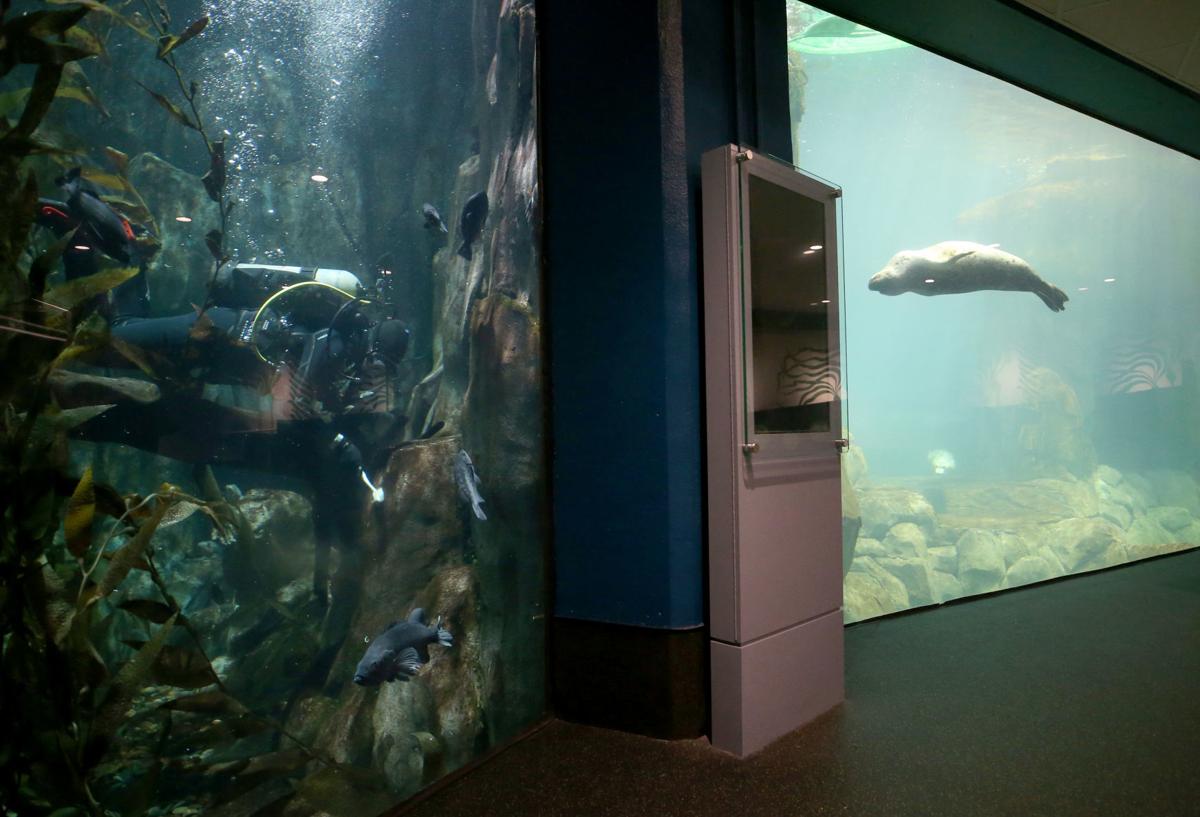 Brooke Carlson, a biologist at the Moody Gardens Aquarium Pyramid in Galveston, cleans the rocky facade in one of the North Pacific exhibits Thursday, May 14, 2020. Staff members at Moody Gardens are hopeful they’ll be able to reopen soon. 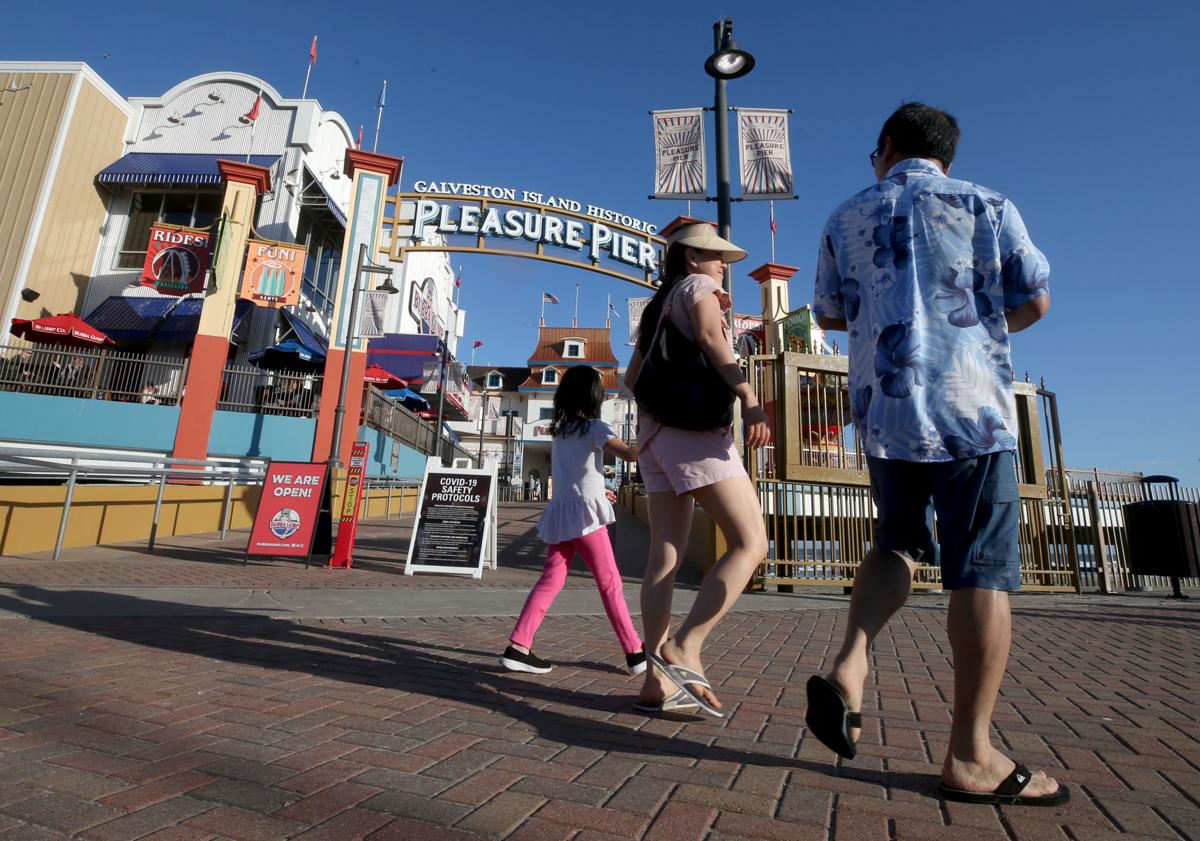 Pedestrians walk past the Galveston Island Historic Pleasure Pier on Thursday, May 14, 2020. The restaurant Bubba Gump Shrimp Co. on the pier has reopened, but the amusement rides on the pier are still closed.

Brooke Carlson, a biologist at the Moody Gardens Aquarium Pyramid in Galveston, cleans the rocky facade in one of the North Pacific exhibits Thursday, May 14, 2020. Staff members at Moody Gardens are hopeful they’ll be able to reopen soon.

Pedestrians walk past the Galveston Island Historic Pleasure Pier on Thursday, May 14, 2020. The restaurant Bubba Gump Shrimp Co. on the pier has reopened, but the amusement rides on the pier are still closed.

Tourist industry groups and operators are pushing for at least partial reopening of large attractions that remain closed two weeks after the state eased restrictions on travel and many businesses.

Reopening amusements would put more money into the local economies and give visitors from across Texas — who since May 1 have been gathering on island beaches and in county parks and marinas — more to do, the groups argue.

The Texas Travel Alliance, in a letter sent last week to Gov. Greg Abbott, pushed for partial reopening of large amusements to 50 percent capacity by Memorial Day weekend, which begins May 22.

Spokespersons for Schlitterbahn, which operates a park at 2026 Lockheed Road in Galveston, did not respond to multiple requests for comment.

The letter, which included specific procedures by which amusements could open and maintain social distance, was meant to show how amusements could reenter the economy, as many other businesses have begun to do, said Erika Boyd, spokeswoman for the Texas Travel Alliance.

“It’s still all up in the air,” Boyd said. “For most of our organizations, their employees are ready.”

“We’re kind of just making plans so we can make a prompt opening once we do hear that we can reopen,” Hamachek said.

Moody Gardens officials hope to get direction from the governor next week, Hamachek said. The attraction’s managers are anxious to reopen but planning to do so in a limited way, she said.

For example, Moody Gardens probably won’t immediately reopen the Discovery Pyramid, which has a lot of interactive features that people touch, Hamachek said.

“At this point, we don’t feel like that’s necessary,” Hamachek said.

Early closures demonstrated how crucial tourism was to the county’s economy. On the island alone, the $1.2 billion industry accounts for about 9,000 jobs and attracts 7.2 million visitors during a normal year.

But large attractions contribute significant revenue both to the state and local economies, Boyd said.

Travel spending generated $4.5 billion in state sales tax revenue in 2018, according to the travel alliance.

The same year, tourism generated $26.6 million in local tax revenue in Galveston, excluding hotel occupancy tax revenue, according to the Galveston Park Board of Trustees.

“We contribute so much revenue both at the local and the state level and we see right now the impacts that those lost tax revenues are having,” Boyd said.

For other area attractions, reopening is still up in the air.

“We do not have a reopening date set at this time,” Moore said. “However, we are working toward reopening this summer.”

Zoos and aquariums can open, but no immediate announcements were made about Moody Gardens in Galveston.

It continues to of interest to me, that the "openings" and changes of "imposed restrictions" do not seem to be based on published metrics or data. Seems that daily we read a whole slew of "data" but I have not seen or read what "data/trend change" is (or are) the key indicator parameter (or parameters). We heard about the "flattening of the curve." What "curve," where is the "master graph"? To me this is "key" just to know if the beneficial progress continues or for some reason there is a turn "up." Just my thoughts.

I’m pretty sure there will be several around here to paste some so called data here for our viewing entertainment.