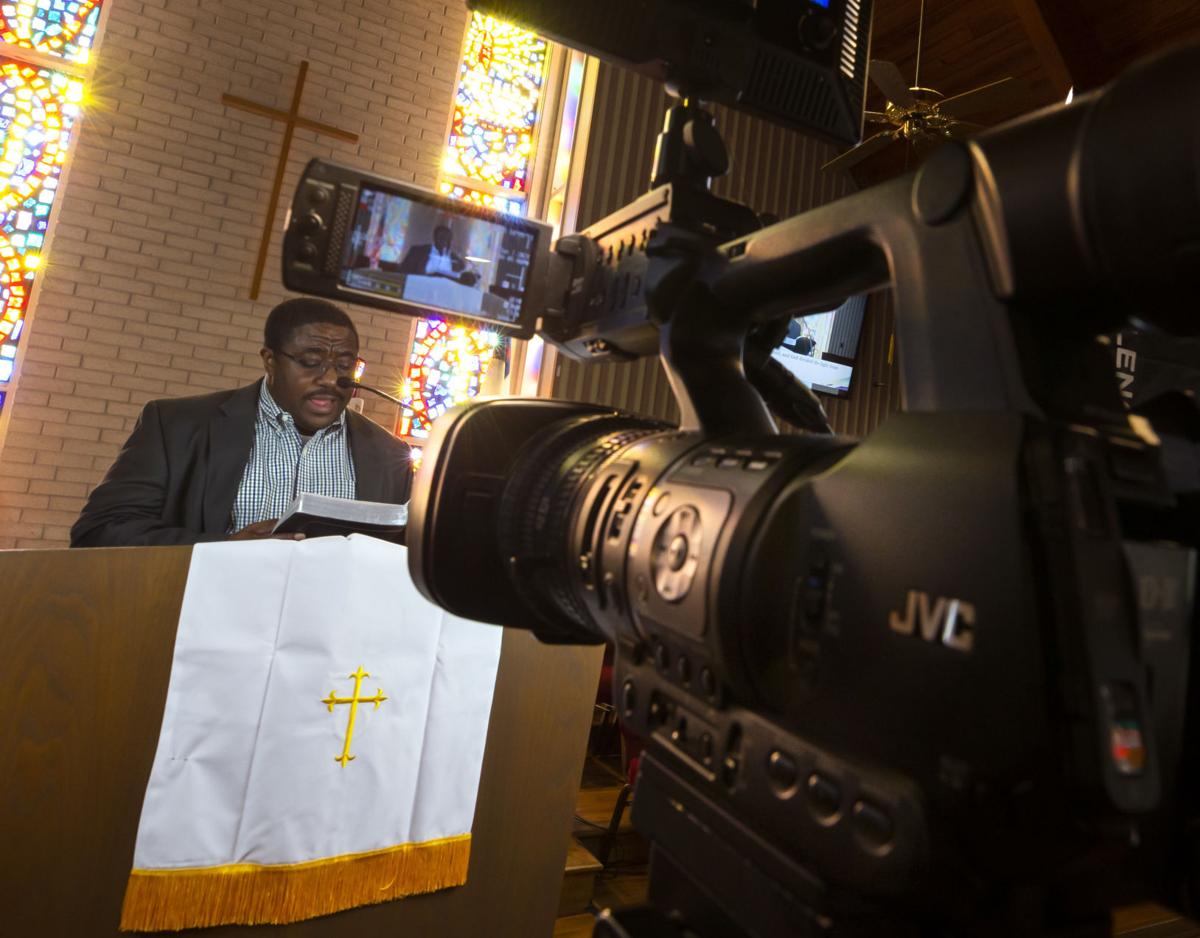 Pastor Johnnie Simpson Jr. reads a passage from the Bible while recording his sermon at Faith United Methodist Church in Dickinson on Thursday, Jan. 7, 2021. 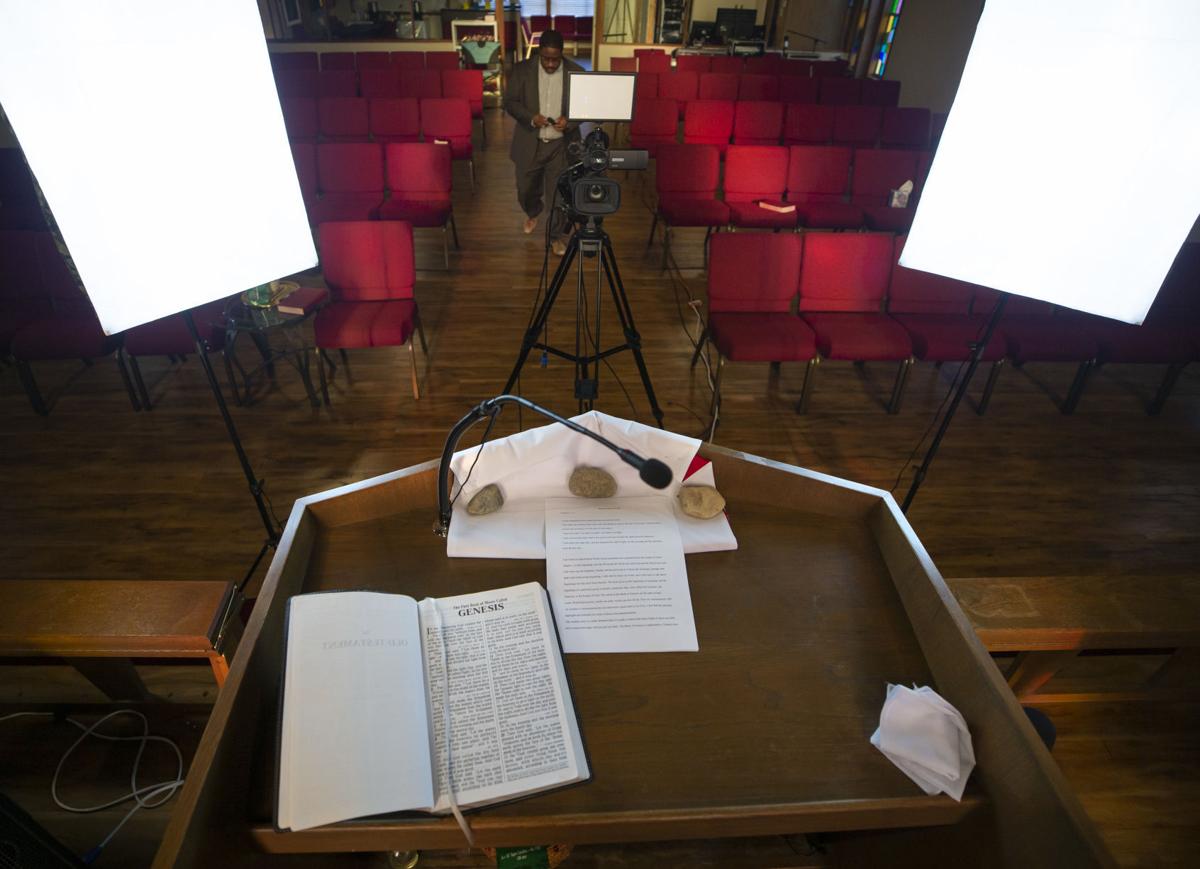 A Bible rests on the pulpit as pastor Johnnie Simpson Jr. prepares audio and visual equipment to record his sermon at Faith United Methodist Church in Dickinson on Thursday, Jan. 7, 2021. 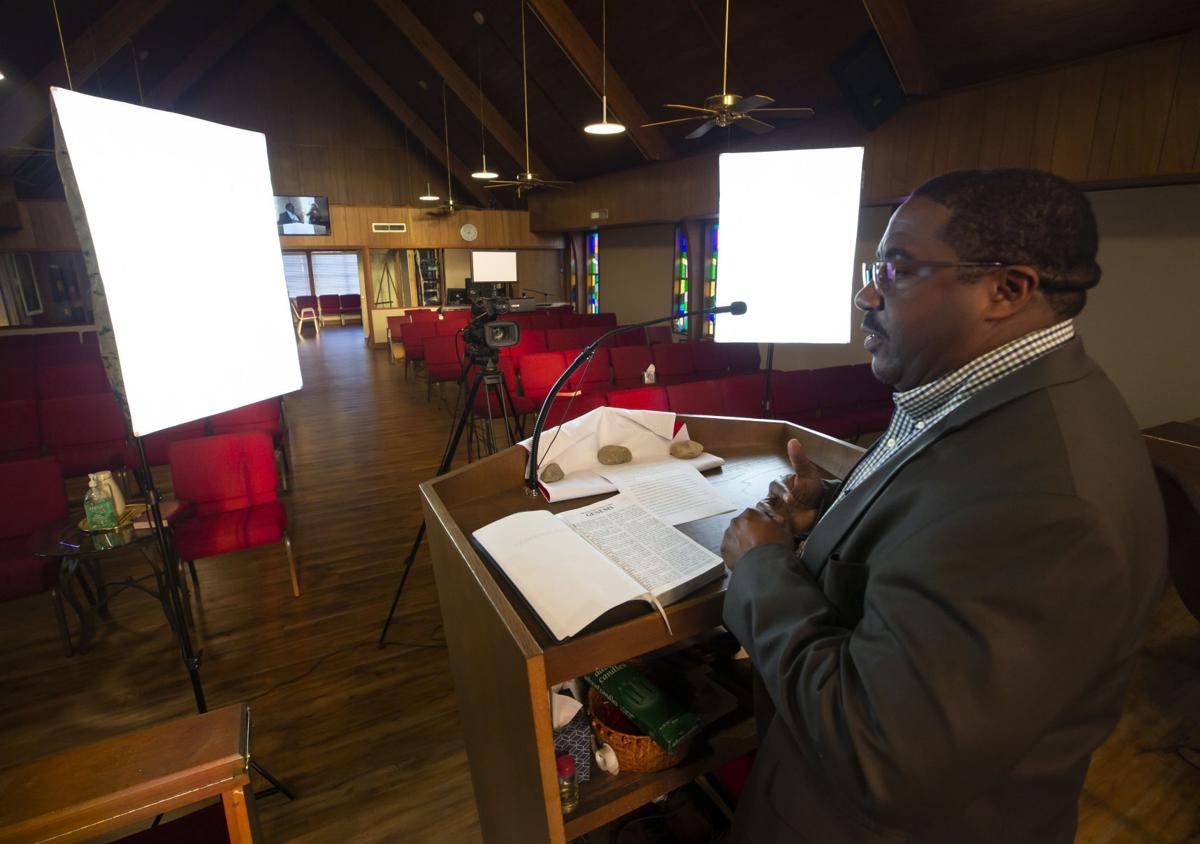 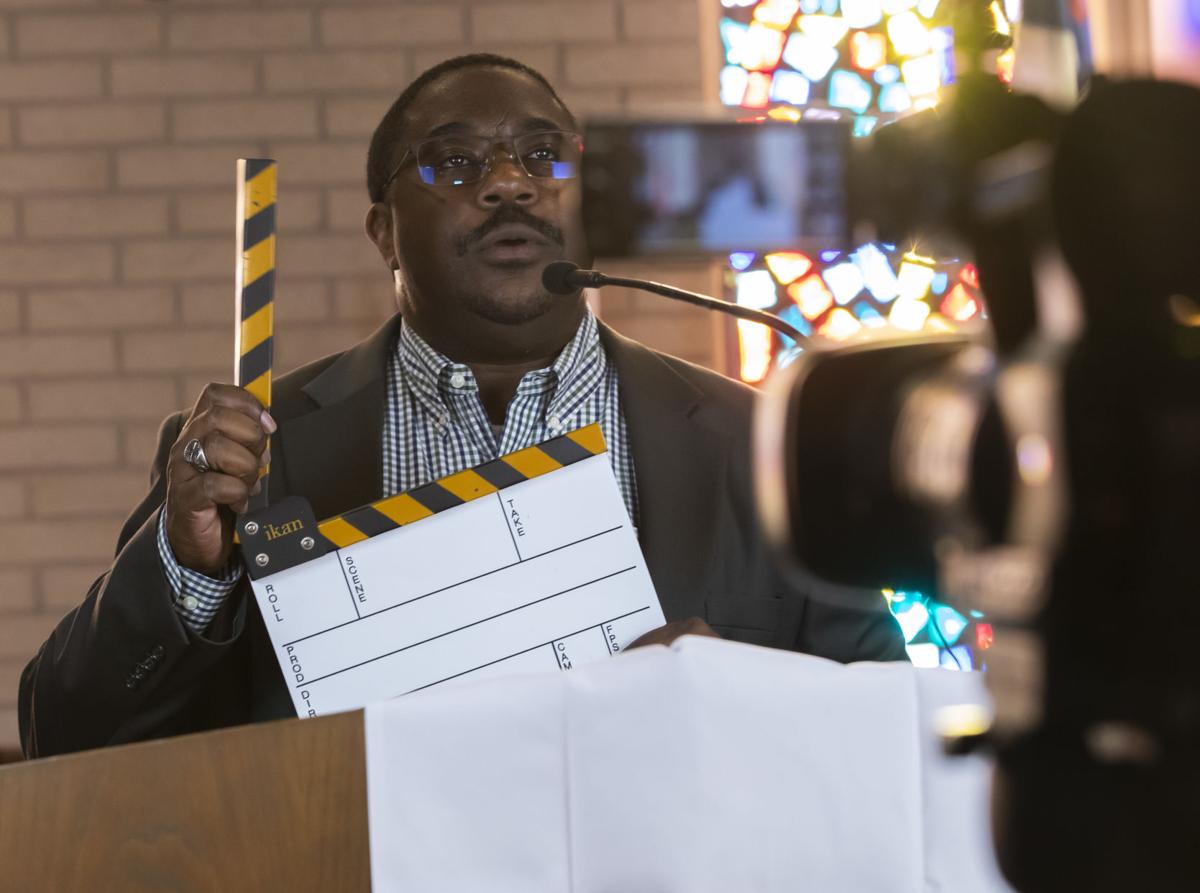 Pastor Johnnie Simpson Jr. reads a passage from the Bible while recording his sermon at Faith United Methodist Church in Dickinson on Thursday, Jan. 7, 2021.

A Bible rests on the pulpit as pastor Johnnie Simpson Jr. prepares audio and visual equipment to record his sermon at Faith United Methodist Church in Dickinson on Thursday, Jan. 7, 2021.

As reports of coronavirus spreading across the country began to appear in March, leaders at Ecclesia Clear Lake held a meeting to discuss how the church would navigate the pandemic, said Coby Cagle, lead pastor at the church.

“Things like communion were off the table,” Cagle said. “So we had to ask, was it worth it to hold in-person services? We decided to put our energy into figuring out the best quality of online live streaming.”

Churches across Galveston County and the nation held conversations just like the one at Ecclesia in March and April, and the answers they came up with have largely charted the unprecedented path they find themselves on as 2021 begins.

Congregations have taken financial hits and made adaptations that might last through the pandemic, as have commercial businesses.

Also similar to COVID’s effect on commerce, the virus is accelerating change and increasing pressures already there for years among churches, said David P. King, a professor of philanthropic studies and the director of the Lake Institute on Faith & Giving at Indiana University-Purdue University Indianapolis.

“We know that engagement and regular attendance are the best patterns for giving,” King said. “So the congregations that are using this crisis as a moment to take stock of their mission may come out stronger, if a more stripped-down organization.”

Churches across the country have seen a steady decline in attendance in recent years, King said. Yet, despite that, studies show fewer churches have closed during the pandemic than might have been expected.

Just 65 percent of American adults described themselves as Christian during telephone surveys in 2018 and 2019, a 12 percent decline in a decade, according to a Pew Research Center survey.

A September study from the Lake Institute on Faith & Giving found a slight majority of congregations, about 52 percent of those surveyed, reported an increase in participation during the pandemic. A significant minority, 41 percent, reported a decline in giving during the same time, according to the study.

About 28 percent of surveyed congregations actually had an increase in donations, King said.

Those trends appear to be playing out among Galveston County congregations.

Magnolia Creek Baptist Church in League City, with an annual budget of about $180,000, has taken a financial hit of about 25 percent, Brett Dutton, the church’s pastor, said. That’s actually better than church leaders expected at the start of the pandemic.

“Thankfully, a couple years earlier, we’d started using an online giving platform called tithe.ly,” Dutton said. “That really helped us. Had that not been in place, it would have been really difficult.”

With online giving measures already in place, church officials could instead turn their attention to finding the best way to livestream services, Dutton said. The church already used social media to communicate with members, so it was just a matter of adding cameras and figuring out how to stream.

Just like Magnolia Creek in League City, many of the measures needed to handle online services at Faith United Methodist Church were put in place years before, because of Hurricane Harvey, said Johnnie Simpson Jr., pastor of the church.

The church was inundated with water during the storm in 2017, and Simpson advocated for audio and visual upgrades during the rebuild, he said.

“We got better microphones, recording equipment and cameras,” he said. “We got software for live streaming and graphic presentation software.”

Once the pandemic hit, all church leaders needed to do was upgrade the internet to accommodate streaming, Simpson said.

Unlike some other churches, finances at Faith United Methodist Church have remained fairly consistent through the pandemic, though the sources have shifted somewhat, Simpson said.

For instance, about 30 percent of the budget came via online sources, in sharp contrast to previous years, he said.

Comparatively speaking, Ecclesia Clear Lake has seen less of a financial hit than some other area churches, but organization leaders have still worked to cut back on some costs, such as conferences and other smaller, miscellaneous expenses, Cagle said.

Magnolia Creek, likewise, benefited because one of only two full-time staff on the payroll left and took a job in Kentucky in August, which removed one of the bigger costs on the congregation’s budget, Dutton said.

The church owns the land the building sits on but has made payments for the building, Dutton said. For several months at the start of the pandemic, congregation officials worked out a deal with the lender to make interest-only payments.

But the church has since returned to making full payments, Dutton said.

Faith United Methodist Church has managed to stay on top of all of its bills and also continue social services and feeding the needy during the pandemic, Simpson said.

Overall, only about 14 percent of all congregations surveyed had to lay off or otherwise reduce staff during the pandemic, according to the study.

For all of the negative things about the pandemic, coronavirus has forced congregations to adapt and learn, Cagle said.

For instance, the shift to online services has led to less in-person giving, but it has opened up churches to a brand new audience farther away, Cagle said.

“Some have joined our church that only found us because of our online presence,” Cagle said. “People are viewing now from around the country. And tithes are coming in from people not in the city but who came on our website and like who we are and what we do.”

It’s an experience Simpson has noticed as well, he said. One of his sermons after the death of George Floyd in Minneapolis went viral after he uploaded it online.

“It’s actually helped the church a lot,” Simpson said. “It’s why I’m strategizing with leadership that when things return somewhat back to normal, we have to be willing to accommodate virtual viewers without giving them the worship experience of sitting in the balcony.”

Simpson has plans to host two services even after the pandemic ends — one for in-person attendance and another strictly for online viewership, he said.

“Those are each distinct audiences,” he said.

Neither Simpson nor Cagle’s congregation has returned to in-person services since the pandemic began, they said.

Dutton’s congregation, meanwhile, has made several efforts to return to in-person services, he said.

Most recently, Magnolia Creek attendees returned to in-person services in September but closed down again after the first week of December because about 10 families out of a congregation of 100 or so became sick with the virus, Dutton said.

That followed two previous shutdowns, the first in March to the end of May and the second from July to September, Dutton said.

The church again opened with the start of 2021 and plans to stay open as long as feasible, but cases appear on the dramatic rise, Dutton said.

What’s happening to churches is a timely issue because coronavirus fatigue might have taken a toll on many residents, Dutton said. It’s important to remember what businesses and churches are going through.

“Weirdly July, at the height of the surge, was our best giving month,” he said. “But looking at the graph, it’s down now. And I think a large part is just because people are tired of dealing with COVID.”

Praying for our churches.