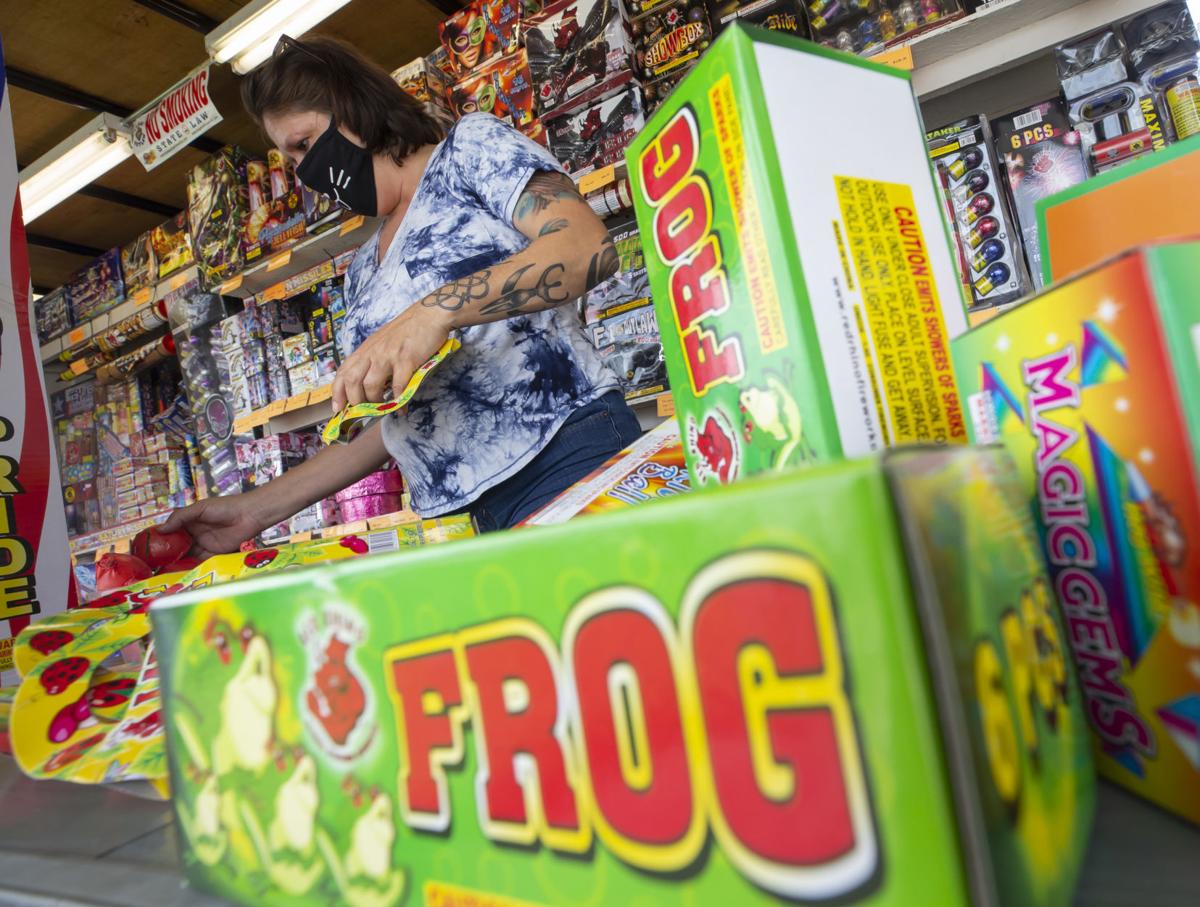 Danett Wright works behind the counter at the Blast Fireworks stand on FM 1764 in Santa Fe on Tuesday, June 30, 2020. 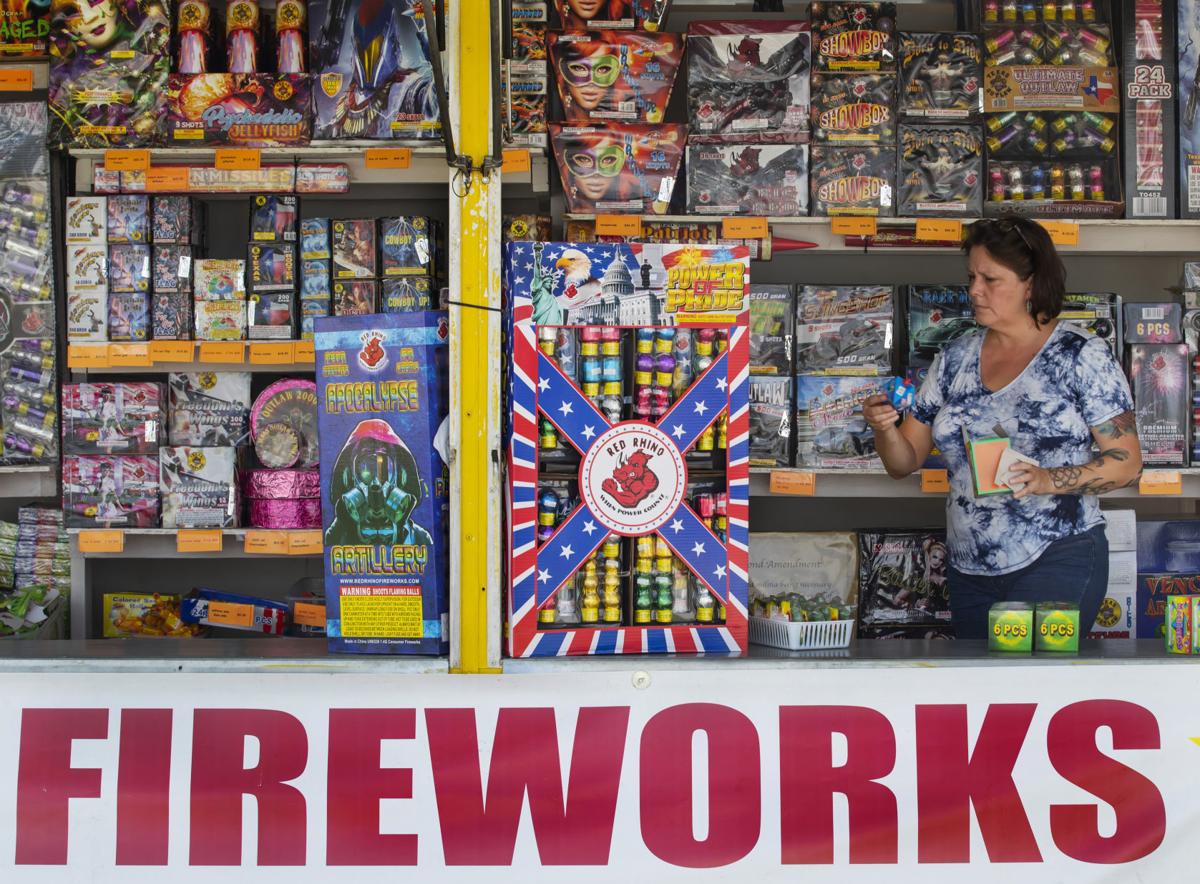 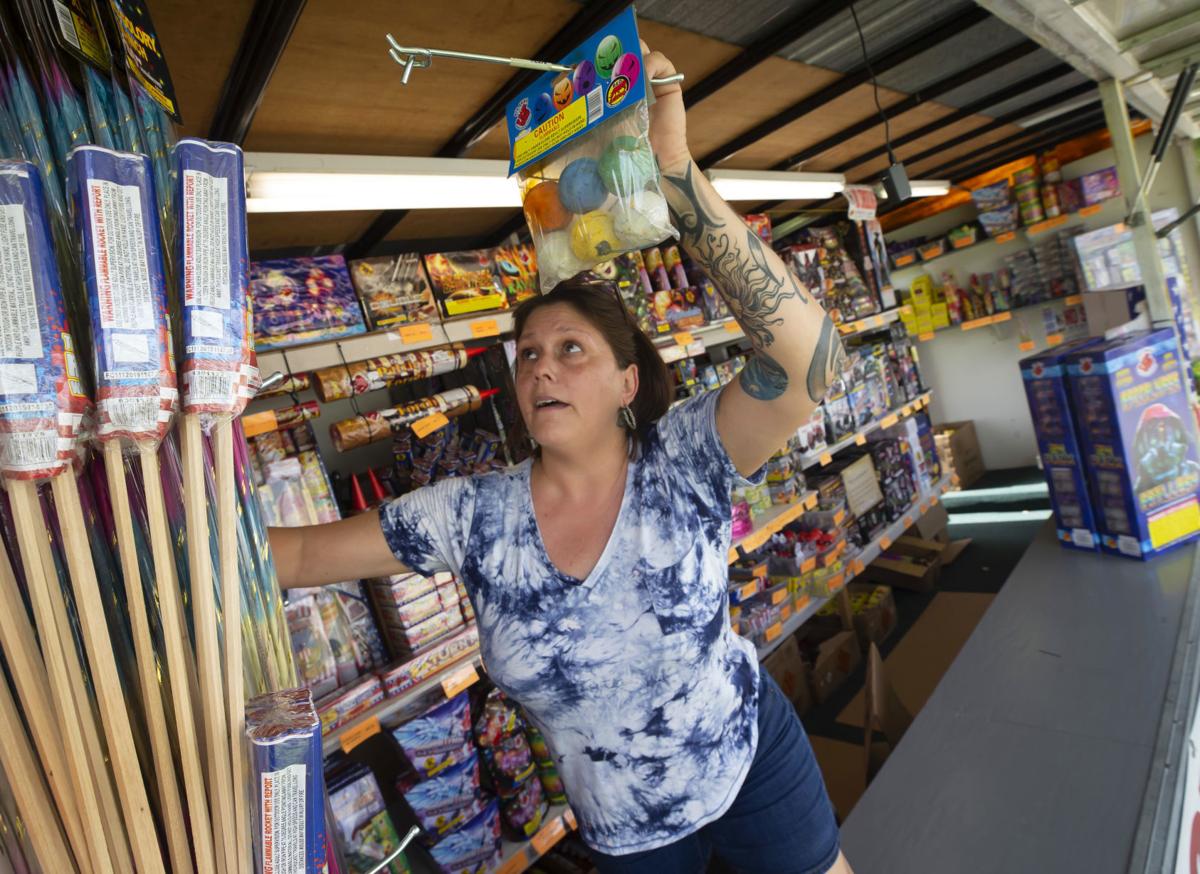 Danett Wright places fireworks on display at the Blast Fireworks stand on FM 1764 in Santa Fe on Tuesday, June 30, 2020.

Danett Wright works behind the counter at the Blast Fireworks stand on FM 1764 in Santa Fe on Tuesday, June 30, 2020.

Danett Wright places fireworks on display at the Blast Fireworks stand on FM 1764 in Santa Fe on Tuesday, June 30, 2020.

Public fireworks shows around Galveston County are canceled, but that doesn’t mean that skies won’t be lit up with frequently illegal amateur productions during this weekend’s Fourth of July holiday.

Fireworks sales are going strong at the stands that dot unincorporated parts of Galveston County, while officials say they hope visitors and residents behave responsibly with their store-bought explosives.

Donna Reed, the owner of Blast Fireworks, a stand with locations in Hitchcock and Santa Fe, said people have been shopping for fireworks in consistent numbers since the stand opened for business June 24. She expected sales would grow even more as the holiday approaches.

Stands like Reed’s don’t sell the same commercial-grade fireworks used in large, professional firework shows. Still, some people who have gone to the stand this year said they were, at least in part, motivated by the lack of fireworks in the area, Reed said.

“Things are going quite well, I think people are looking to do outdoor activities,” Reed said. “A little bit is due to public shows being canceled and people wanting to stay home and in family groups.”

All of the county’s major annual fireworks shows have been canceled as of Tuesday. In Galveston, the city’s Park Board of Trustees called off the island event in May, citing costs and uncertainties about what kind of crowds would be allowed or encouraged come July.

Other cities waited longer to cancel but made the same decision.

In recent weeks, as cases of coronavirus continued to grow in local communities, the cities of Friendswood, Texas City, Santa Fe, League City and Kemah canceled their local shows.

“Kemah is still open,” Kemah Mayor Terri Gale said Tuesday. “Kemah is safe and clean. We just want to make sure that we don’t prompt a crowd that could change that.”

But canceling official fireworks events hasn’t limited officials’ expectations for big crowds in local beach communities or of ad hoc firework shows in communities all across the county.

Consumer fireworks are prohibited from being fired within the city limits of any city in Galveston County. They are legal in unincorporated areas, including on Bolivar Peninsula.

But city bans haven’t stopped people from shooting fireworks in their neighborhoods in the past, and local officials don’t believe that the coming weekend will be any different.

“With the cancellation of all the bigger shows and the way people have been reacting to quarantine lately, I think any reasonable person could make the assumption that there will be an uptick in amateur fireworks,” Galveston Fire Marshal Chris Harrison said.

Harrison was most worried about people burning themselves with fireworks or shooting them near houses that would normally be out of the way of professional shows.

Galveston County Sheriff Henry Trochesset said he didn’t expect that fireworks would become an overwhelming problem for his deputies and was thankful for rains over the past week, which he said reduced the potential for grass fires.

At PyroShack Fireworks, a stand on Bolivar Peninsula, owner Debbie Lambing said she was an old hand at identifying people who might be new to shooting fireworks and often gives two pieces of advice.

First, you can’t take fireworks back over to Galveston on the ferry.

Second, if you’re buying mortar rounds, make sure you don’t load them in the firing tubes upside down.

“The mortars you shoot off one at a time, and you have to make sure you shoot them right side up,” she said. “We’ve had several people who have come and have never shot a firework before. A lot of them are from out of state. We try to instruct them and we caution them to clean up the beach when they’re through.”