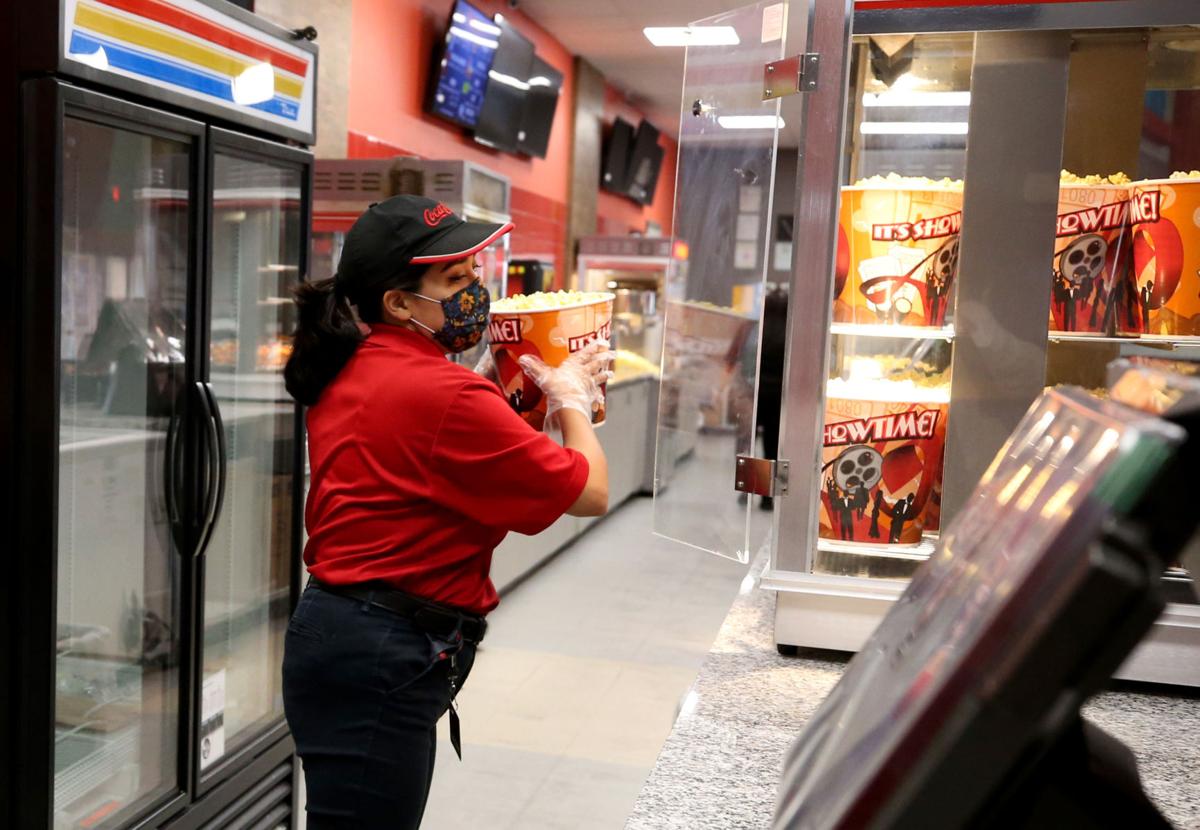 Mia Mesa, a crew leader at Premiere LUX Cinema in Galveston, gets a bucket of popcorn for a moviegoer Monday, Jan. 11, 2021. 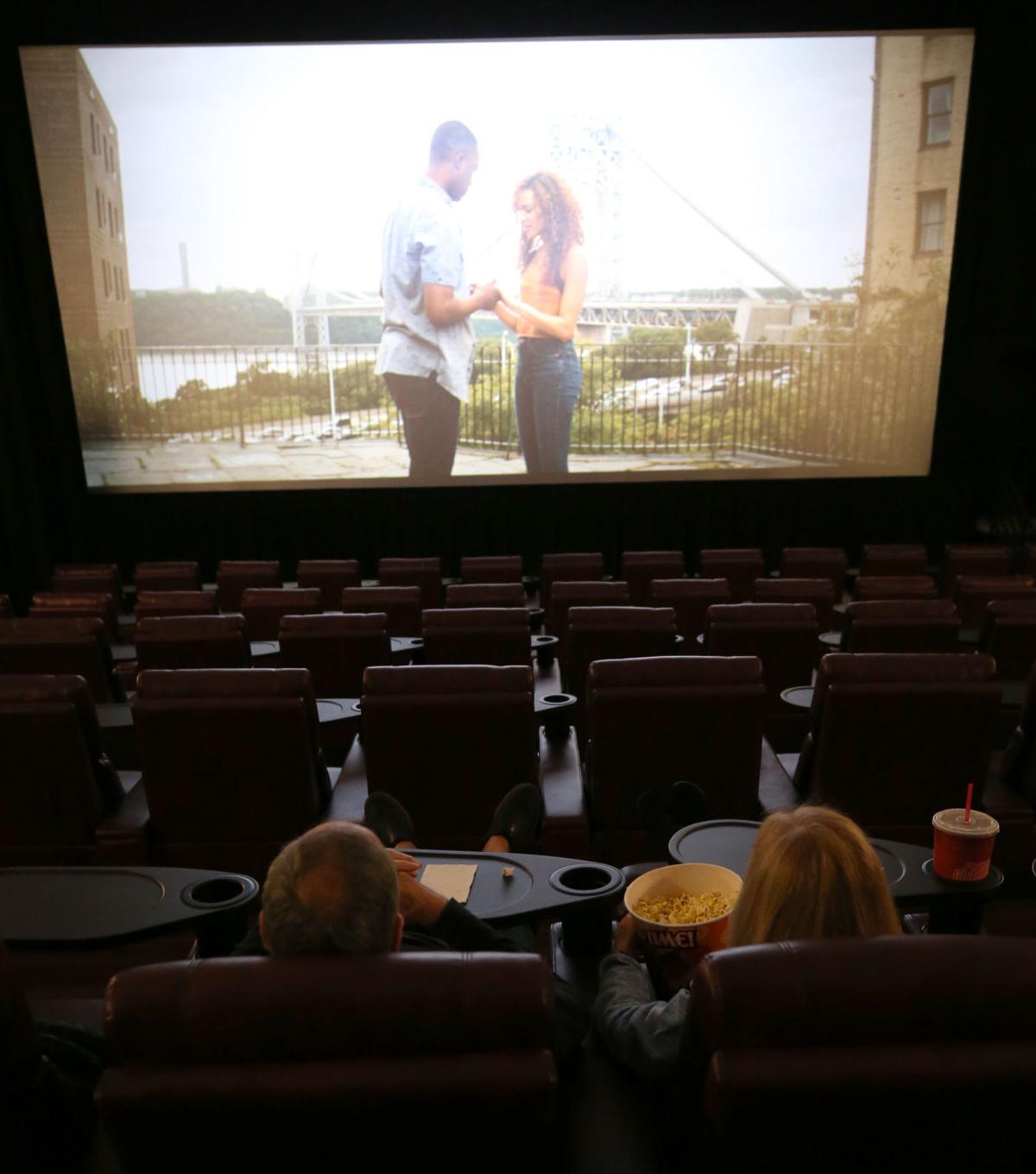 A couple watches previews before their movie at Premiere LUX Cinema, 8902 Seawall Blvd. in Galveston, on Monday, Jan. 11, 2021. 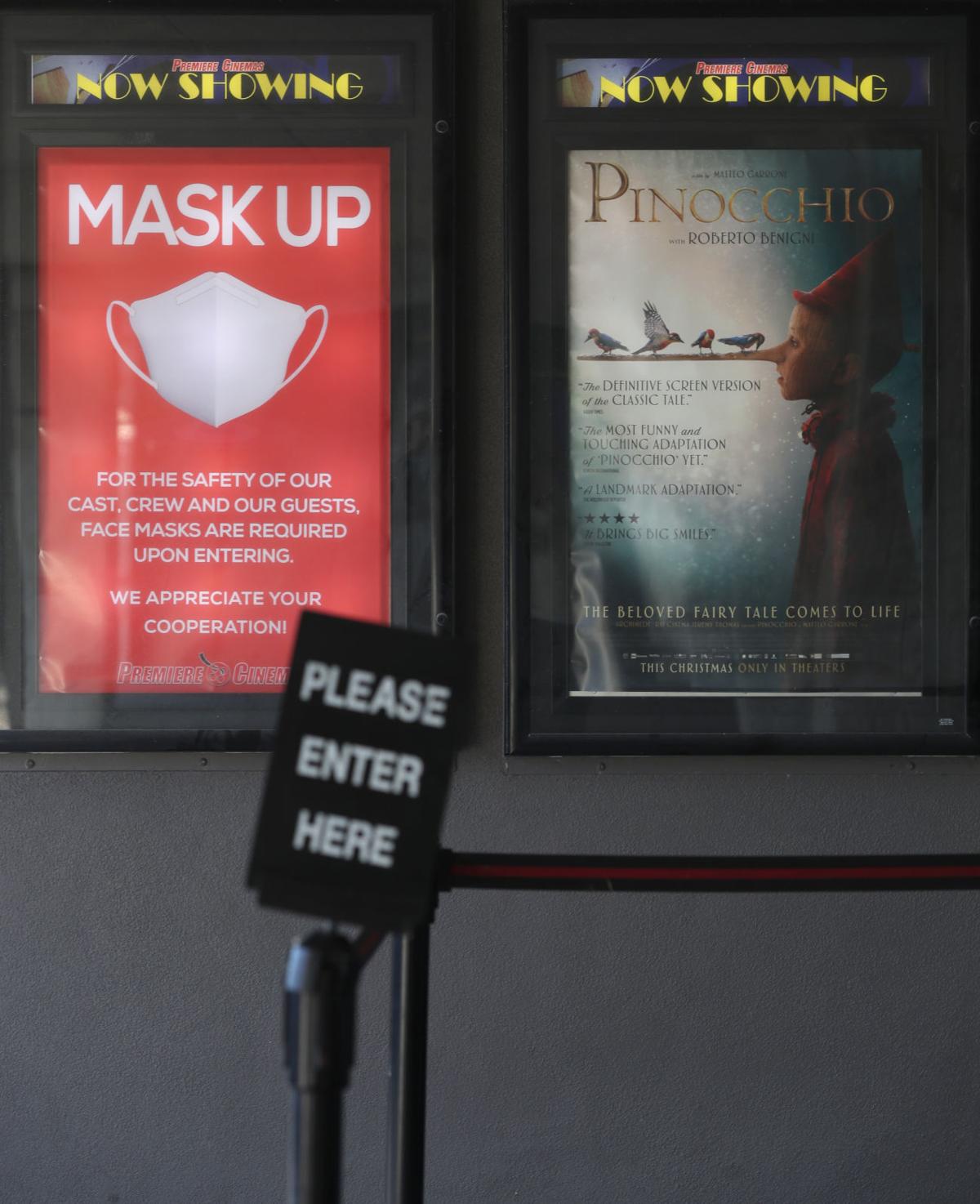 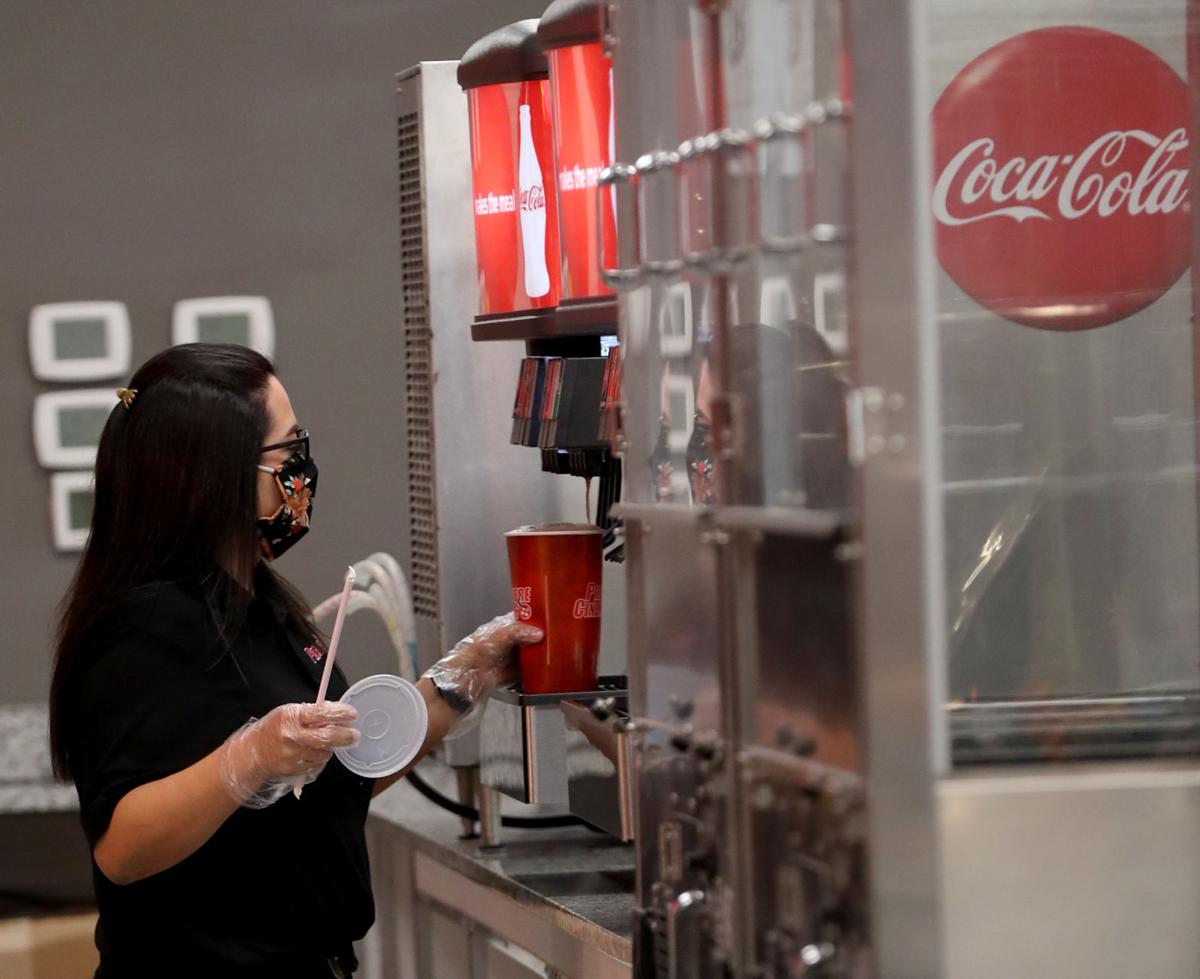 Rachel Vernon, a director at Premiere LUX Cinema in Galveston, gets a drink for a moviegoer Monday, Jan. 11, 2021. 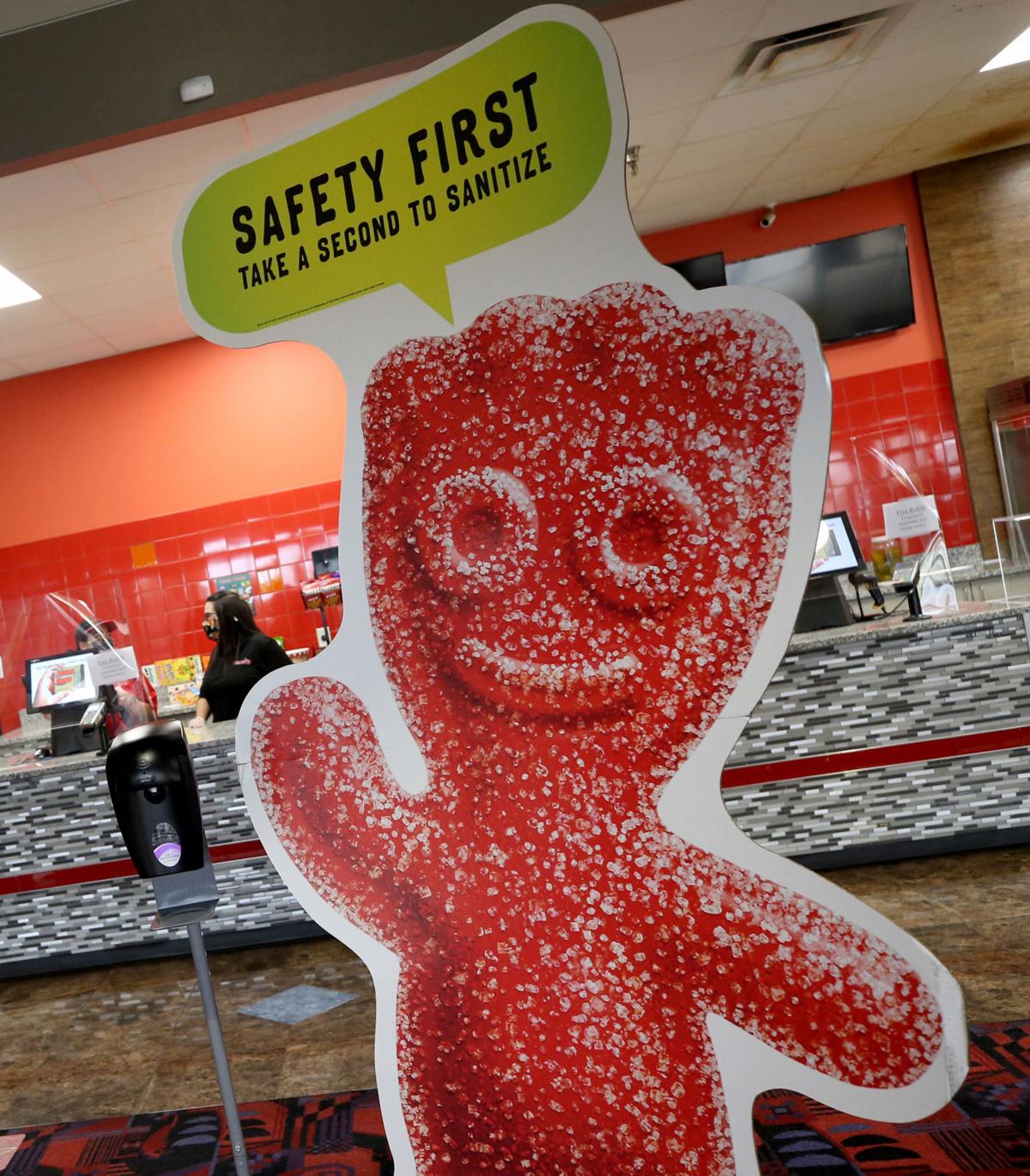 Signs and posters at Premiere LUX Cinema in Galveston remind people to sanitize their hands and wear masks Monday, Jan. 11, 2021.

Mia Mesa, a crew leader at Premiere LUX Cinema in Galveston, gets a bucket of popcorn for a moviegoer Monday, Jan. 11, 2021.

A couple watches previews before their movie at Premiere LUX Cinema, 8902 Seawall Blvd. in Galveston, on Monday, Jan. 11, 2021.

Rachel Vernon, a director at Premiere LUX Cinema in Galveston, gets a drink for a moviegoer Monday, Jan. 11, 2021.

Signs and posters at Premiere LUX Cinema in Galveston remind people to sanitize their hands and wear masks Monday, Jan. 11, 2021.

Operators of theaters and other entertainment venues shuttered for months under COVID-19 restrictions had hoped for some relief early this year. But with COVID-19 cases rising, they’re shifting those hopes to the summer.

Venue and theater operators are confident audiences eventually will return but, until then, they face more months of reduced shows, capacity and revenue.

Operators of the Grand 1894 Opera House, 2020 Postoffice St., had hoped to resume limited-capacity shows by this month. But Maureen Patton, executive director of the popular live performance venue, thought better of it as COVID cases rise in the county.

Patton hopes to reopen the venue this summer. Even then, it will sell tickets for only about 200 of its 1,000 seats and require masks, she said.

And some large-scale shows won’t happen at all for the foreseeable future, she said.

“When we do a major show, a Broadway show, there are usually as many as 30 or 40 people that are going to be on stage at some point,” Patton said.

‘NUMBERS STILL NOT THERE’

Although business was fairly good during the holiday season, it didn’t compare to 2019, Davis said.

“Numbers are still not there, and a lot of that had to do with the way theaters are being run,” Davis said.

To keep people 6 feet apart under pandemic protocol, the theater can’t bring its capacity up to 75 percent, he said.

“Our seating is probably down to 35 percent of what it was in a best-case scenario,” Davis said.

North American box office revenues plummeted to a 40-year low of $2.3 billion in 2020, a significant blow after five years in which revenues exceeded $11 billion annually, according to data firm Comscore.

Hundreds of venues have gone under nationwide, and many more have had to lay off a majority of employees, Fix said.

Those losses are bad for the industry but are also bad for local economies, Fix said. Visitors to entertainment venues also visit restaurants, bars and local shops, she said.

“These venues bring the foot traffic to the area,” Fix said. “By helping them survive it, they’re also helping the local businesses survive it. We can be part of the economic renewal of a community if we’re able to hold on.”

There is good news, Fix said. Late last year, the U.S. Congress included some aid for entertainment venues in the second pandemic-related federal aid package, for which the association had advocated.

But much of that money likely won’t be distributed for months, she said.

Mora has been paying the rent and utility bills at the historic venue by pulling from fan donations and with a part-time job he picked up during the pandemic, he said.

The Old Quarter has hosted some sporadic in-person shows and several live stream-concerts, but Mora is erring on the side of caution, he said.

“Honestly, I just keep taking it one week at a time,” Mora said.

Because of the pandemic, musicians have been pretty cautious about traveling for shows, but some are starting to contact him about late spring or summer shows, Mora said.

“They’re kind of starting to poke their heads out because people are hurting for money,” Mora said.

Mora hopes that by summer, he’ll be able to have more shows, but he’s worried about capacity issues at the venue, which is known for its small, intimate setting.

Most venue operations agree that customers will want to return to in-person concerts.

The restaurant, 707 state Highway 146 in Kemah, is known for live music six days a week.

“It’s something that people always look for,” Newell said. “We still feel like the crowds are pretty good.”

Davis is confident cinema business will return once vaccines are more widely distributed, he said. Even with streaming platforms rising in popularity during the pandemic, Davis expects customers will return to theaters.

“We live in a society where people really want to go out,” Davis said.