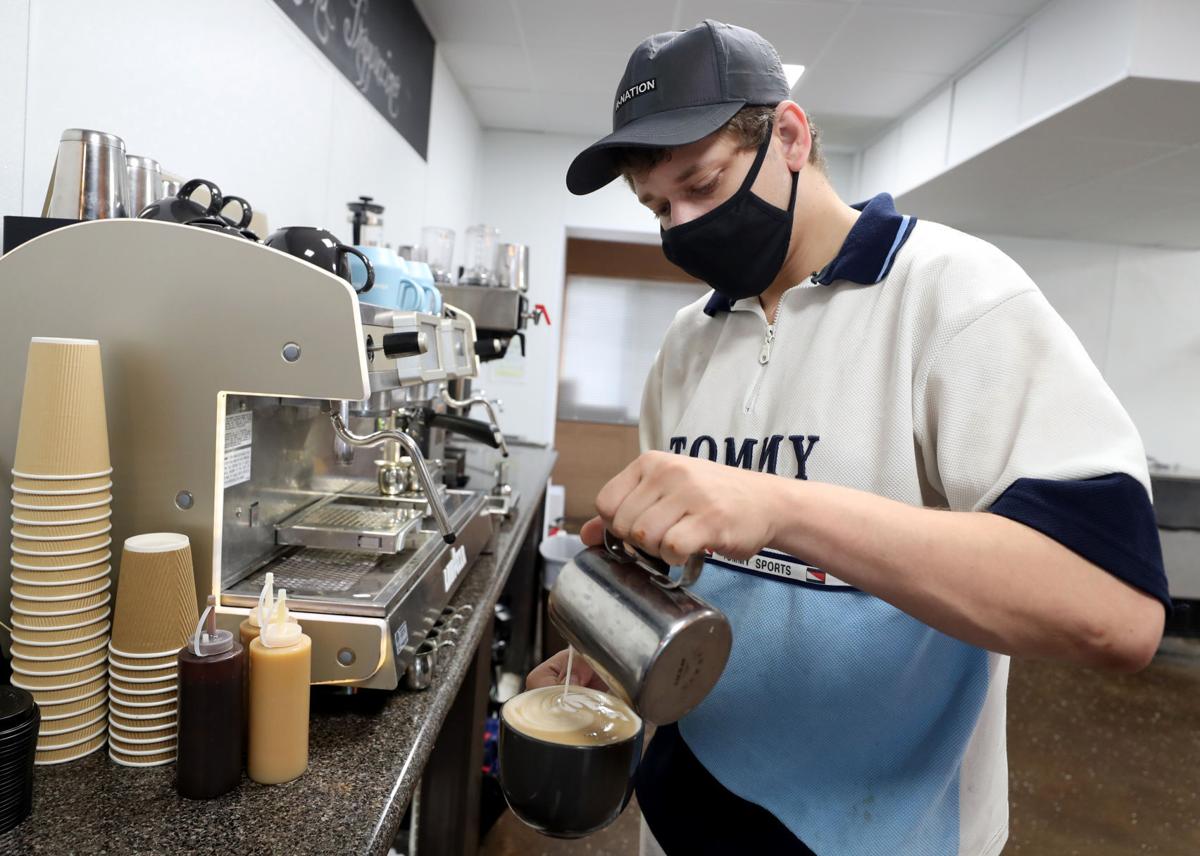 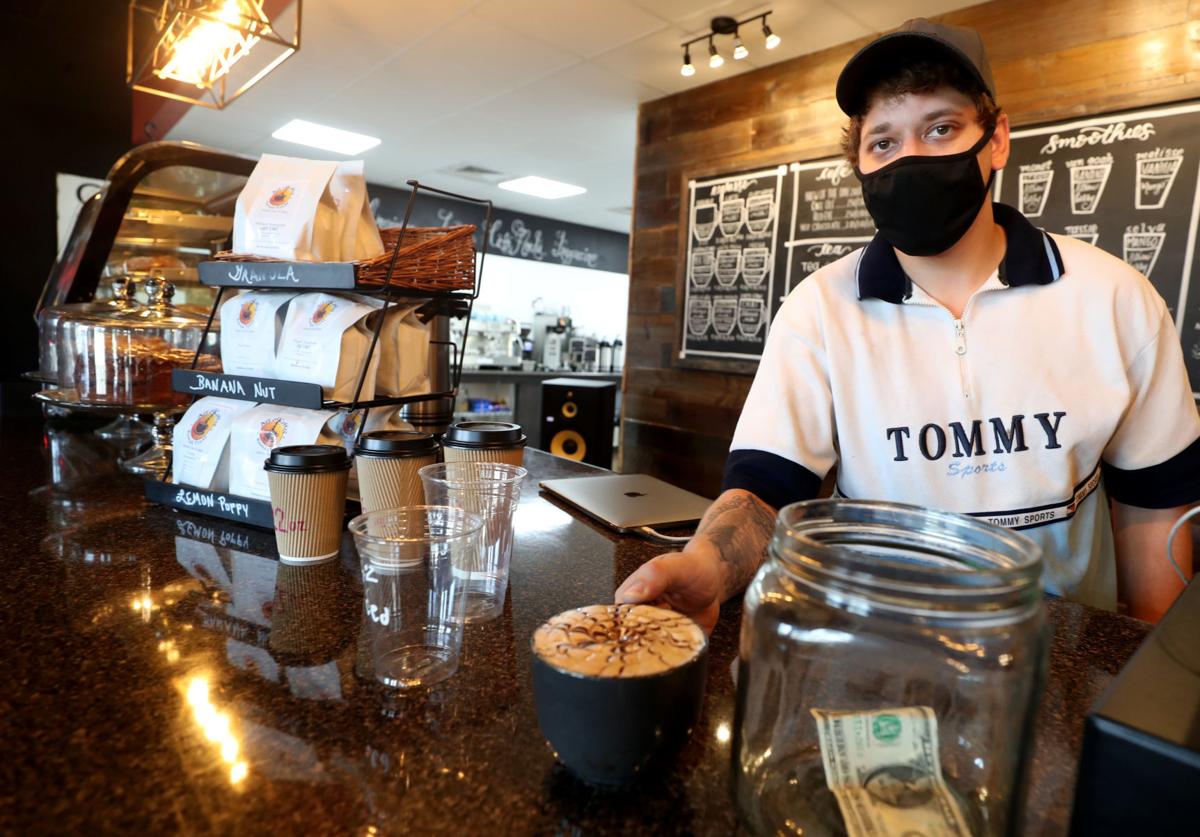 Ronnie Stelly serves a latte at Art of Coffee, 401 Laurel St., in La Marque on Thursday, July 31, 2020. The business benefited from financial aid from the city.

Ronnie Stelly serves a latte at Art of Coffee, 401 Laurel St., in La Marque on Thursday, July 31, 2020. The business benefited from financial aid from the city.

Businesses across Galveston County have been hurting because of pandemic-related closures and lost sales, but some cities have taken up the mantel of providing direct help to local companies.

For some cities, which also have pandemic-related expenses, providing that help might be challenging, but others say the expense is worth protecting the business community.

Some cities gave businesses money through their economic development corporations.

“The board met and decided that at this time and in this climate, the best thing to do would be to help them retain the businesses that we have,” Martin said.

The money came from the corporation’s reserve funds and was given to 125 of La Marque’s 400 or so businesses, Martin said.

For the businesses that got the money, it was a life saver.

The money it got from the grant program helped to pay for rent, electricity and payroll, Sims said.

“It took a lot of burden off the profits being down so low,” Sims said.

Dickinson and Texas City made similar moves with their development corporations.

Texas City offered two rounds of grants to business with fewer than 50 employees.

In Dickinson, the city used $400,000 to send $7,272 to each of 53 businesses, said Scott Jones, CEO and executive director of the Dickinson Economic Development Corp.

The corporation diverted money from other projects that have been delayed because of the pandemic, such as its Gulf Coast Public Market, a proposal for a food and drink vendor location, Jones said.

“Everybody’s hurting the same way,” Jones said. “We recommended, and the council and the board both accepted, that we have to help out these local businesses.”

It just makes sense to give the money to businesses, which generated the sales tax that funds the corporation anyway, Jones said.

“If they go under, they’re not going to be able to do much good for the city,” Jones said.

This kind of assistance for businesses is crucial to ensuring their survival, said Jenny Senter, president of the Texas City-La Marque Chamber of Commerce.

“Having no income coming in really creates a void that is sometimes insurmountable,” Senter said.

Not every city has the ability to give grants like some have, but shops and companies that got extra help have needed it, Senter said.

“These grants offered by some of the cities have been the lifeline,” she said.

Such assistance has helped Santa Fe businesses get through the spring closure, said Gina Bouvier, president and CEO of the Santa Fe Chamber of Commerce.

Several local businesses applied to state or federal aid programs, but when they were denied they turned to the city funds, Bouvier said.

“They’re good, honest, hardworking people, and they’re not going to reach out and take advantage of funds if they don’t absolutely need it,” Bouvier said.

Unlike other cities, the money didn’t come from the corporation but from the city’s state-funded coronavirus relief money, Baker said.

In Galveston, people have been talking about providing help to businesses for months, said Gina Spagnola, president and CEO of the Galveston Regional Chamber of Commerce.

It would be a good use of sales tax money, she said.

“We have to save those that are investing in our city,” Spagnola said.

Although the city is starting to talk about giving financial help to island businesses, Spagnola worries it’s already too late for some, she said.

Spagnola wants the city to set up an easy way to launch such a program during disasters in the future, she said.

But assistance to businesses could still be a help, city Economic Development Coordinator Garret McLeod said.

How much funding is available will depend on which program the board chooses because each program pulls from a different pot of money, McLeod said.

“I think really we’ve taken the opportunity to study what other cities have done, try to understand what’s been successful,” McLeod said.

League City didn’t offer financial assistance to businesses because it lacks a mechanism to do that, spokeswoman Sarah Greer Osborne said, explaining that, unlike other area cities, League City doesn’t have an industrial or economic development corporation.

And only 25 percent of state aid money could have been used for small business grants, she said. But cities also have to use that chunk for city facility assistance, such as protective equipment and telecommuting equipment for employees, she said.

“We have used that 25 percent of the 100 to keep our city open and functioning,” Greer Osborne said.

League City is considering using some of its state relief money to give masks to businesses or set up a testing program for restaurants and retail shops, Greer Osborne said.

State, feds could take a lesson from Galveston County cities

Galveston County cities such as La Marque, Dickinson, Hitchcock and Texas City that have devoted some of their economic development money to h…

As a former member of the Santa Fe Economic Development Corp., I fully support these efforts. Our local businesses are the back bone of our community.