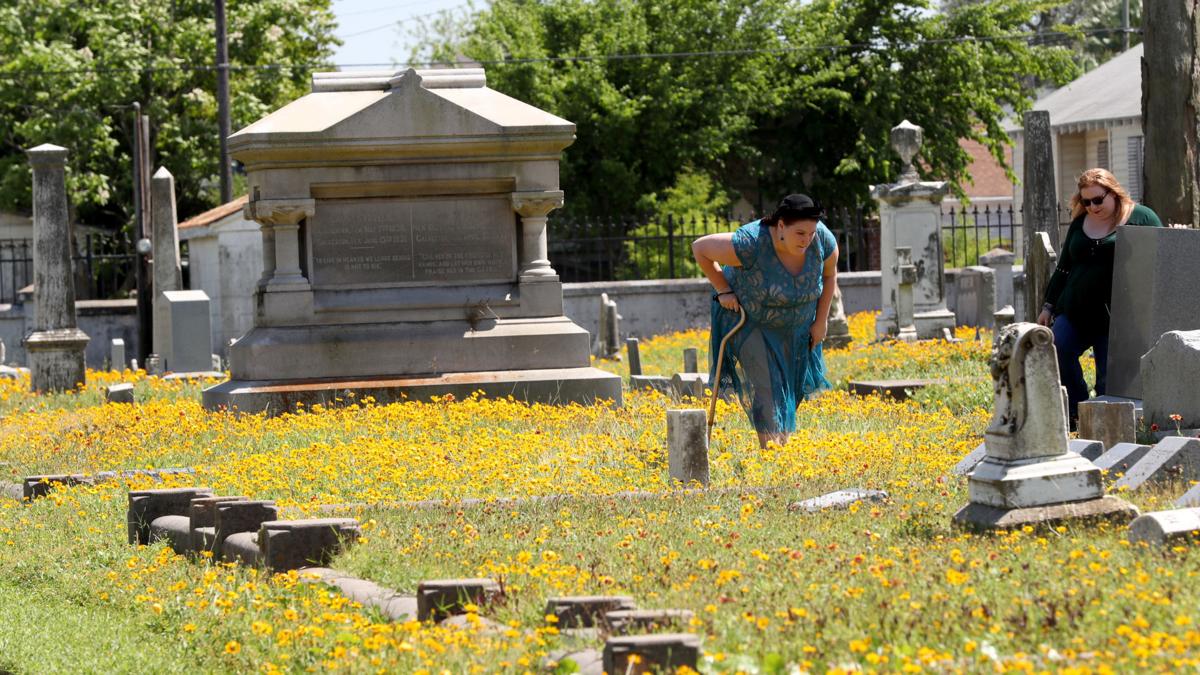 Alicia Forsythe, left, and Gin’.a Keel, who run Lantern Light Tours of Galveston, look for graves of victims of the 1918 pandemic at the Broadway Cemetery Historical District in Galveston on Thursday. The tour operators are using the time during the coronavirus shutdown to do research for a cemetery tour on the 1918 Spanish Flu pandemic and other deadly outbreaks on the island. 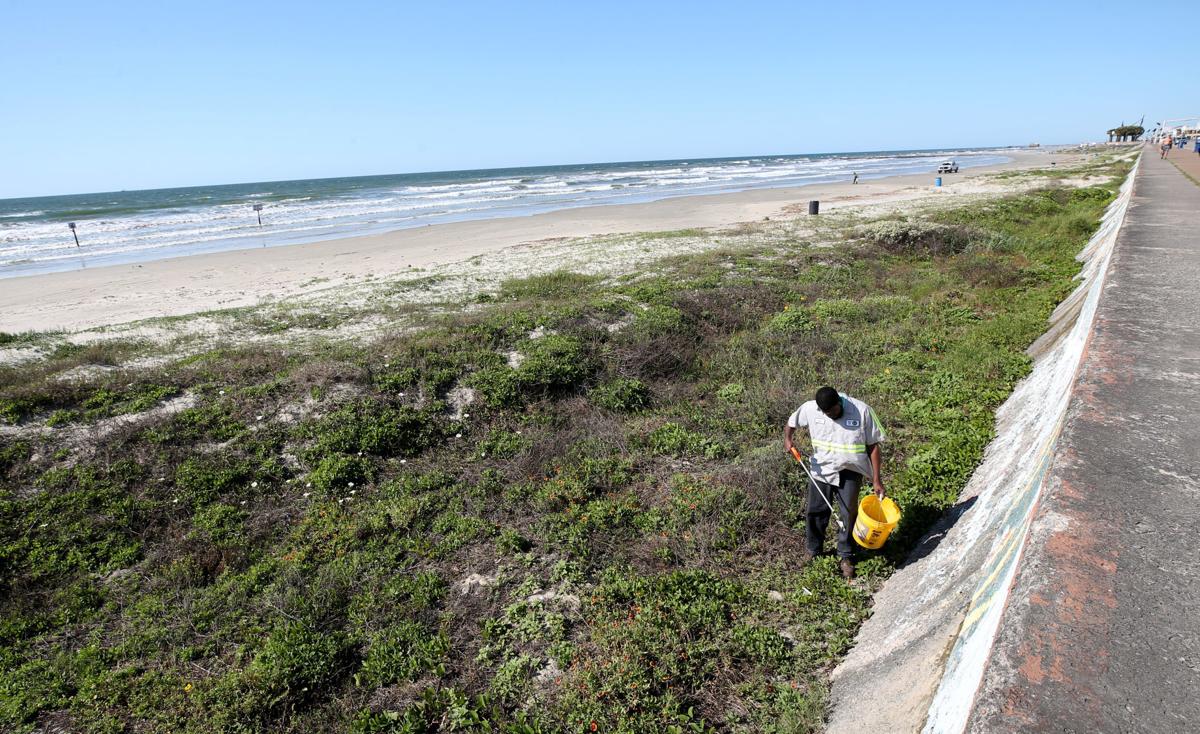 Isaiah Mills, a coastal zone management technician with the Galveston Island Park Board of Trustees, picks up litter at the base of the seawall near 43rd Street in Galveston on Friday, April 24, 2020. 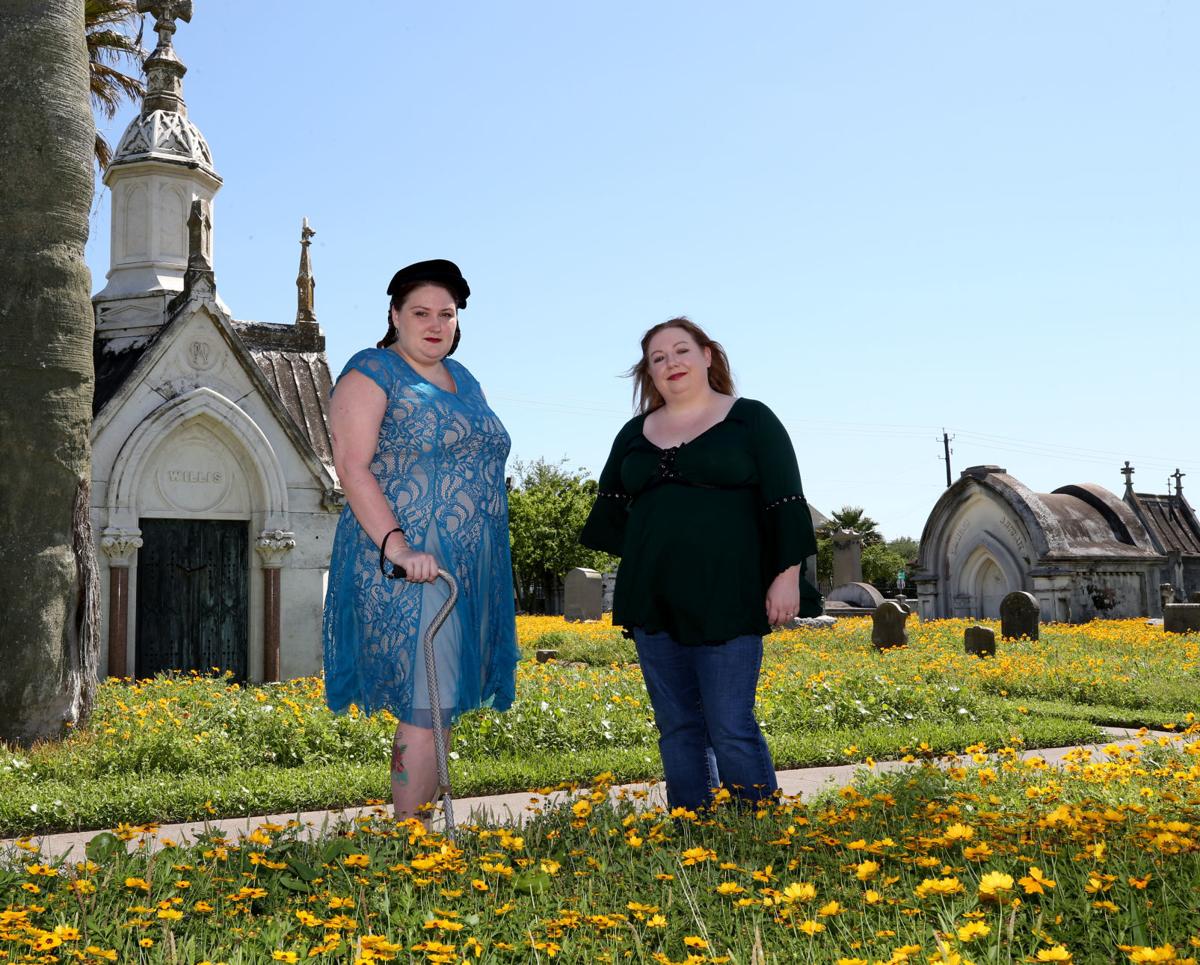 Alicia Forsythe, left, and Gin’.a Keel, who run Lantern Light Tours of Galveston, are waiting to see when they’ll be able to give tours again.

Alicia Forsythe, left, and Gin’.a Keel, who run Lantern Light Tours of Galveston, look for graves of victims of the 1918 pandemic at the Broadway Cemetery Historical District in Galveston on Thursday. The tour operators are using the time during the coronavirus shutdown to do research for a cemetery tour on the 1918 Spanish Flu pandemic and other deadly outbreaks on the island.

Isaiah Mills, a coastal zone management technician with the Galveston Island Park Board of Trustees, picks up litter at the base of the seawall near 43rd Street in Galveston on Friday, April 24, 2020.

Alicia Forsythe, left, and Gin’.a Keel, who run Lantern Light Tours of Galveston, are waiting to see when they’ll be able to give tours again.

Local leaders this week released plans to begin gradually reopening businesses closed to help prevent the spread of coronavirus. But for many, especially in Galveston and Kemah, reopening without the usual stream of visitors is going to pose significant challenge.

Although island businesses and employees are itching to get back to work, many rely on Galveston’s $1.2 billion a year tourism industry. And it’s still unclear how quickly people can or will be willing to visit normal attractions. Meanwhile, the city of Galveston is working to prevent, or at least discourage, crowds from coming to the island, for fear of taxing health and safety systems and exposing first responders to the virus.

The Galveston Park Board of Trustees, which promotes island tourism, is confident visitors will return to the island once venues begin to open — and especially when beaches fully reopen, Executive Director Kelly de Schaun said.

The trick will be getting the day-trippers who come to the free beach to put money back into the island economy, de Schaun said.

“You could come to the beach all day and not have an economic impact,” she said.

More than 35 percent, about 9,000, of all island jobs in 2018 were sustained by tourism, according to park board data.

That same year, 2,137 of the 22,682 residents in the workforce were employed in retail, according to the U.S. Census Bureau.

Another 4,253 people worked in arts, entertainment, recreation, accommodation and food services, according to the census.

Those two industries, heavily sustained by tourism, make up 28.2 percent of Galveston’s workforce.

Galveston’s tourism industry is largely made up of small businesses, many of which have been hard hit by the closures, de Schaun said.

“How much of that local flavor that is really unique to Galveston is going to come out the other side?” de Schaun said.

Allowing restaurants to offer dining in will return some normalcy to people’s lives but won’t be a boon for the operators, said James Clark, president of the Galveston Restaurant Association.

“I don’t think we’ll have more business than what we have right now,” Clark said.

That’s because the restaurant industry relies heavily on visitors from off-island, he said.

“There are only 55,000 folks on the island,” Clark said. “It’s going to be very interesting these next few months to see how businesses reinvent themselves and stay outside of the box.”

Kemah, home to the popular Kemah Boardwalk and other attractions, is likely to see more people taking part in some of its free attractions, such as the parks and the lake, first, Reid said.

“I think there’s going to be a lot of changes on the horizon for the entire region,” Reid said.

Tourist numbers definitely will go down, especially because cruise ships are idled and no large conferences are coming into town, Reid said.

Small operators have taken a big hit from closing and restricting tourist venues, said Alicia Forsythe, co-owner of Galveston Lantern Tours. She’s confident, though, that people will start returning to her business when she gets the green light to resume operations, she said.

“It’s been a challenge in a lot of ways, but we’re lucky because we don’t have a lot of overhead,” Forsythe said.

Forsythe plans to reopen when she can but wants to be very cautious because she’s studied historical outbreaks and understands how devastating they can become, she said.

Larger tourism operators aren’t sure when they’ll be able to open up.

At Moody Gardens, the staff isn’t even able to plan marketing campaigns because they’re unsure when they’ll be allowed to reopen, spokeswoman Jerri Hamachek said.

“We map out a plan according to what we believe will happen, but it has to be a very fluid plan,” Hamachek said.

Bringing visitors to the island is imperative to Moody Gardens, which counts on 80 percent of its customers coming from Houston, Hamachek said.

Given the time it takes to ramp up for a season, Patton estimates the Grand won’t be able to reopen until September at the earliest, she said.

The Grand has some reserves and some ability to borrow, but long-term closure will be a struggle, Patton said.

The Grand also has an economic impact on other businesses such as restaurants and parking garages, she said.

“When we’re not open, the restaurants are hurting,” Patton said.

The good news for Galveston is that many businesses are accustomed to natural disasters and have prepared for setback, even if it wasn’t one of this scale, said Jeff Sjostrom, president of the Galveston Economic Development Partnership.

There will be challenges, however, he said.

“I don’t know that people understand how thin the margins are with businesses like restaurants,” Sjostrom said. “You cut their capacity in half, it really creates some challenges.”

And revenue from people visiting the island is significant, Sjostrom said.

But Sjostrom is confident people will return, and so is de Schaun.

Galveston has the benefit of being within driving distance of population hubs such as Houston, she said.

We have heard a lot concern that if we open up to near normal capacities (with reasonable distancing in place) metro Houston (Harris County) may bring a wave of virus cases to the island that we've been able to avoid so far. The published rate of virus cases between Harris and Galveston counties doesn't bear out that concern.

As of April 21, Galveston County had a reported infection case rate as a percentage of the population of nearly ten times that of Harris County. In both counties it appears the trajectory of the virus is heading down. That's taken from aggregated state and local data that apparently smooths any minor differences between the counts.

While people do have concerns about the present situation, the actual data we have on hand does not support the idea we are a pristine haven compared to Harris County. Of course, it might be objected we don't have nearly enough tested in either county to come to a conclusion...and that is the point.

The facts we have at this time show a diminishing health risk and a rapidly rising economic risk. Galveston Island is even more in the crosshairs of the unfolding national tragedy because our economy is so dependent on tourism, accomodation and food services. What has taken over a decade to build back after Ike is being washed out to sea in a matter of weeks and it's being done in the face of what the actual data shows.

We have consistently used models from places with no reasonable parallel to us as the base case and it has been completely wrong. We were told on March 27 to prepare ourselves for an imminent tsunami of cases flooding our hospitals. We have had a city council member tell his constituents we were "two weeks behind New York," a scare tactic with no statistical validity that has been disproven, yet council still dithers while small business withers.

Perhaps the mayor or council representatives can share with us exactly how many zeros to the right of the decimal point we need to see before they are willing to significantly change course. Right now we are in the ten-thousandths of one percent range of the county population having clinical case symptoms of the virus. If we don't stop soon, we will be using the parts-per-million standard more usually seen in measuring particulate matter than medical case loads.

I found myself in an old cemetery about 20 years ago, looking up dead relatives, and I noticed the abundance of markers dated to 1918. It was only later that I learned about the great epidemic, and it suddenly made sense.