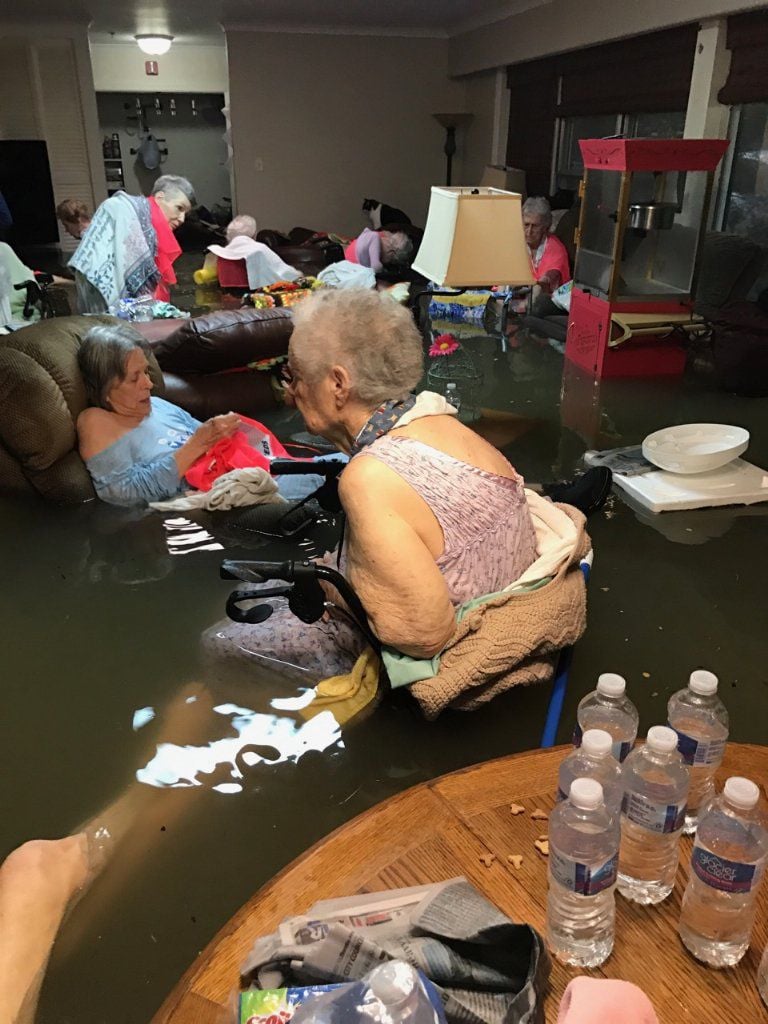 Residents of La Vita Bella in Dickinson sit in waist-deep water during Hurricane Harvey. Fifteen residents of the assisted living facility were rescued by boat in August, 2017, according to Dickinson emergency management officials. 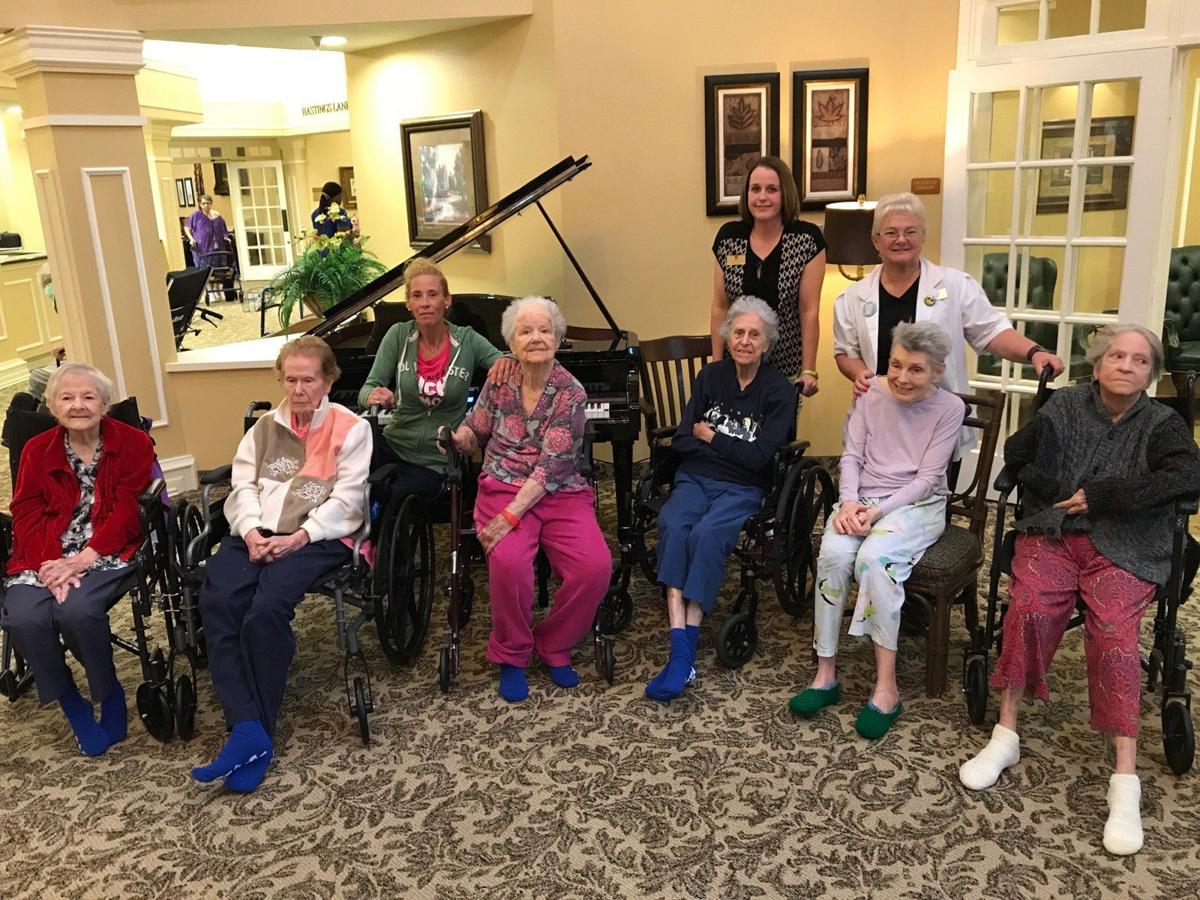 Some of the women evacuated from La Vita Bella assisted-living facility in Dickinson were photographed at Laurel Court, a skilled nursing community in Alvin. A photograph of the women sitting in waist-deep floodwater has drawn world-wide attention.

Residents of La Vita Bella in Dickinson sit in waist-deep water during Hurricane Harvey. Fifteen residents of the assisted living facility were rescued by boat in August, 2017, according to Dickinson emergency management officials.

Some of the women evacuated from La Vita Bella assisted-living facility in Dickinson were photographed at Laurel Court, a skilled nursing community in Alvin. A photograph of the women sitting in waist-deep floodwater has drawn world-wide attention.

As the 15 residents of La Vita Bella sat in their activity room early Sunday morning — the room where they play games, listen to big-band music and eat popcorn — they joked and laughed, even as floodwater quickly rose about their ankles, and then their waists.

What else could they do, asked Trudy Lampson, owner of the Dickinson assisted living facility and caretaker of the group.

“My ladies actually were really good,” Lampson said in a phone interview with The Daily News on Monday. “It was happy. It was funny. You had to laugh, because if you didn’t laugh you’d have to stand there and cry.”

Lampson said she wasn’t at La Vita Bella when her staff first called about water bubbling up out of a toilet. She told the staff to watch its progress.

When water started coming in the back door about 3 a.m., she drove through torrential rain to get to the house that her own mother had called home for 15 years, until her death four months ago, Lampson said.

The residents were moved, one by one, to the living room of the one-story house on Oak Drive, and the water rose, she said. Some were placed on mattresses and floated as the water got deeper. Lampson, her husband and three caretakers stayed with the residents the whole time, she said.

Furniture and boxes of cat food began to float around them, she said.

“It was awful,” Lampson said.

The water was warm, but the women got cold. Despite the circumstances, she said the women laughed and joked and talked throughout the ordeal.

During the flood, the employees called 911, imploring rescuers for help, Lampson said. She called her out-of-state children, and they put out more calls. She was pretty sure someone tried to call the White House, she said.

At about 9 a.m., Lampson sent daughter, Kimberly, a picture of the women sitting in the water.

The photo has become one of the indelible images of Hurricane Harvey, and has been shared worldwide. It first gained attention after Lampson’s son-in-law, Tim McIntosh, who lives in Florida, shared the photo on Twitter asking for help.

It went viral quickly, eventually reaching the eyes of some reporters. By the time the image was confirmed as authentic by an emergency official in Dickinson, La Vita Bella had been evacuated.

Rescue came in a boat and two trucks. The boat was driven by one of the resident’s sons, a local minister.

The trucks were from the Texas National Guard.

On Sunday, Dickinson officials said the group was rescued by a helicopter. Dickinson Emergency Operations Manager David Popoff corrected himself Monday, saying at the time of the group’s evacuation he saw a helicopter hovering in their general location and assumed it was performing a rescue.

The women who live in house range from age 59 to 99. Some of them have neurological and memory loss conditions. The women live in “boutique” accommodations, Lampson said, and get one-on-one care from the staff.

“They bring their knickknacks and they can decorate their rooms how they want,” she said. “It’s like grandma’s house.”

La Vita Bella has an evacuation plan, Lampson said, and the residents had evacuated during both hurricanes Ike and Rita. She had heard the calls for a voluntary evacuation of Dickinson on Thursday, more than 48 hours before the historically heavy rains began falling on the northern parts of Galveston County.

But after consulting with the Texas Department of Aging and Disability Services, she decided not to flee the city, she said.

A department spokesperson could not immediately confirm Lampson’s statement.

“We collect that information from a regulatory standpoint and follow up with them as the storm goes on,” said Carrie Williams, in an email to The Daily News. “As the state licensing agency, we don’t have the role of instructing or ordering facilities to evacuate. We urge everyone to follow local warnings.”

Popoff, the city’s emergency manager, said he was upset the residents were not evacuated when the voluntary call went out. The residents seemingly meet the criteria of those warned to leave before the storm. They had medical and mobility issues and were in a low-lying area.

“That concerns me,” he said.

Lampson said that on Saturday evening, before the heaviest rains began, she consulted with emergency management officials. By that time, they told her to shelter in place, instead of evacuating, she said.

The building had not flooded during past storms, Lampson said. Despite the forecasts, which initially called for up to 30 inches over five days, she didn’t think the rainfall would put anybody at risk. Then Harvey dropped more than 20 inches of rain on parts of Galveston County in a matter of hours.

“We’ve never been flooded in all the years I’ve owned it,” she said. “I’ve never had a problem. We’ve had a problem with the hurricanes coming through, and we get out of there real fast.

“This was ‘shelter in place’ no problem”

In hindsight, Lampson said she would have done things differently.

“The world has changed,” she said. “The weather has changed. I’d definitely do it different.”

Lampson is staying with her residents at an assisted living home in Alvin for the time being. Four of the residents were taken to local hospitals, she said. The group is being well taken care of, she said, and doesn’t have any immediate need for donations.

On Monday, her husband returned to La Vita Bella to retrieve the home’s other residents: a group of cats and chickens that had to be left behind during the evacuation. They’re all safe now, she said.

Ms. Lampson is correct, that house never flooded. Before it was turned into a senior home, my family owned it for most of my childhood. I'm so thankful that these lovely people were saved! Those waters were dangerous, especially since the bayou is just on the other side of the street ... I used to lay one the wooden foot bridge and watch the moccasins swim by. Wish I could be there to help! Doing what I can with donations to the Red Cross and the SPCA. Stay strong y'all!

The ladies don't look like they were laughing & joking. They look stressed & tired. Lets not overlook this part of the report, they meet the criteria for voluntary evacuation... David Popoff, the city’s emergency manager, said he was upset the residents were not evacuated when the voluntary call went out. The residents seemingly meet the criteria of those warned to leave before the storm. They had medical and mobility issues and were in a low-lying area. “That concerns me,” he said...... So... Why second guess emergency mgmt? Why not get them out when the voluntary evacuation was called 48hrs ahead of the flooding?

Thank you, Laura, for sharing your experiences with that location. It adds clarity to the entire incident.

I'll ask again, why didn't these ladies' families come get them? Something tells me they probably thought the building was a safe place to be.

One final observation: I think that lady doing the sewing or knitting is about as cool as they come! Talk about making lemonade out of lemons! Old people are just amazing.

Apologies. I got the name wrong in my last post. I meant Linda.

I can't find a way to do a preview of my post before sending it or make a correction once it's posted.

"The water was warm, but the women got cold. Despite the circumstances, she said the women laughed and joked and talked throughout the ordeal".... come on Do you really think that's believable? There's no way that water was warm, why do I say that ? because you mentioned the water started coming in from back door at 3 in the morning. Water will be cold at that time, if it had been 3pm then yes I would believe water was "warm". You know the elderly can get hypothermic very easily. Perhaps if you would of posted the " picture of them laughing and joking throughout the ordeal" instead of the picture showing them scared and confused people would be seeing this differently. But I doubt you can actually back that up....although I wish you could prove me wrong, and make yourself look a tad bit better. It would be wise to not try to make lite of the situation just to try to cover your rear end. You and I and many other people know that this shouldn't of happened, someone really screwed up / delayed an evacuation that could of taken place before the rains started. It was on the news that A Lot of rain was expected, it was a Hurricane for petes sake. "DADS was consulted on what the facility should do?" ... weren't you listening to the local advisories forecasting rain and low lying areas at risk for flooding leading to voluntary evacuation? The facilities evacuation plan should of been implemented, period. Meetings and contingency plans were in place that clearly were not followed or ignored, for what reasons are unbeknownst to me. You were responsible for those residents, common sense was not utilized, a mistake/ neglect occurred , that falls on you. Waiting to see what the investigation determines.