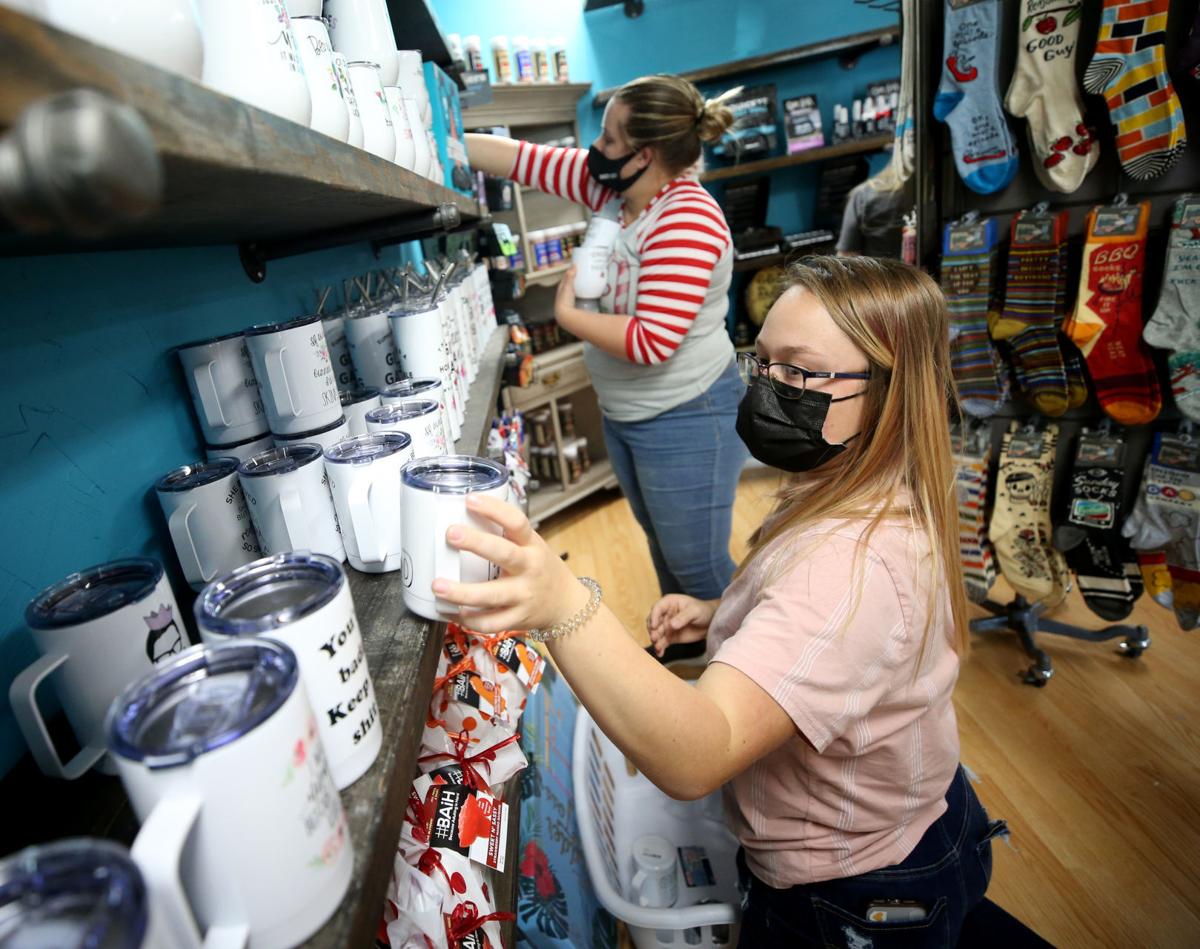 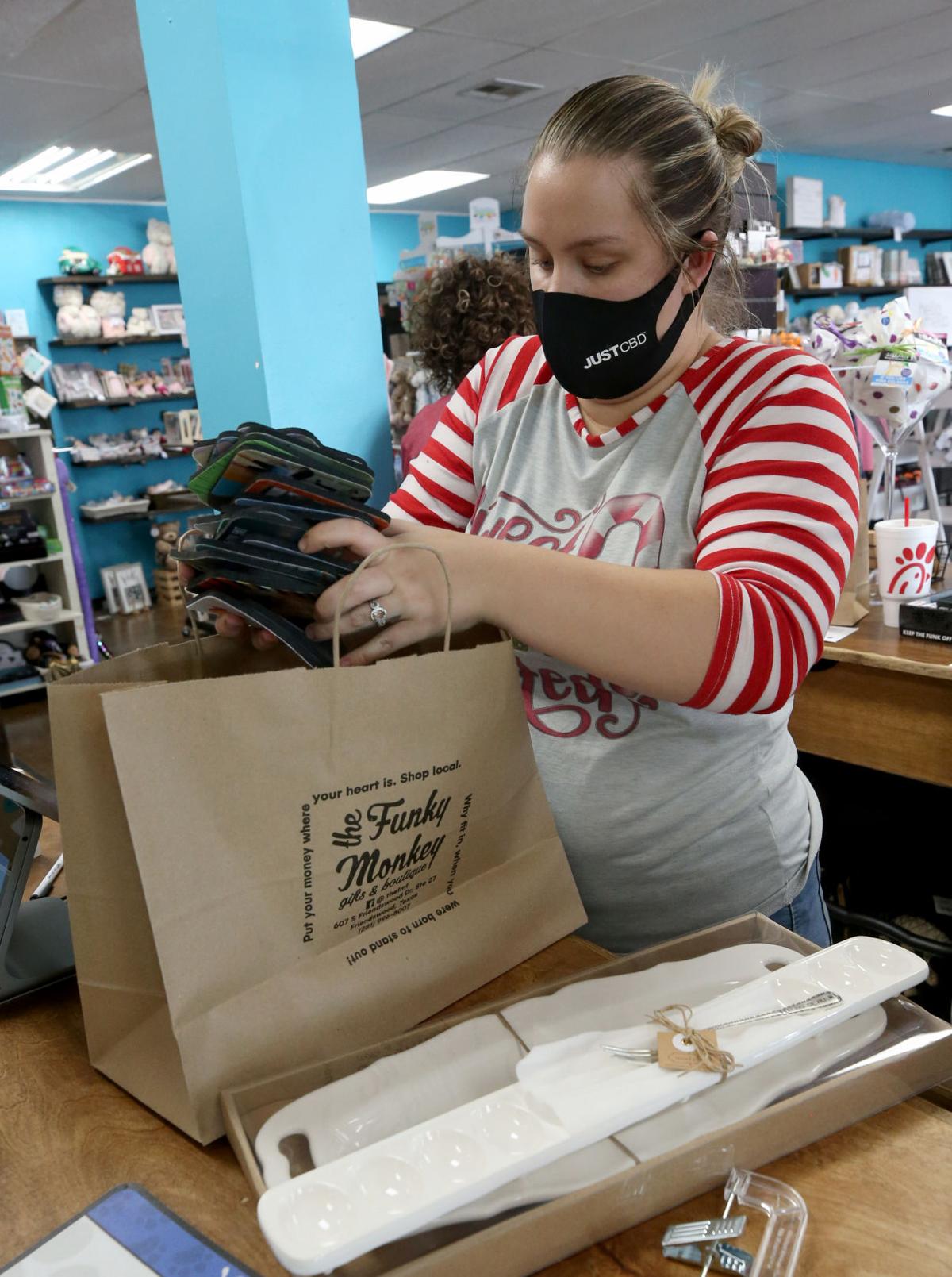 Breanne Coyle bags a customer’s purchase at The Funky Monkey in Friendswood on Tuesday, Dec. 22, 2020. 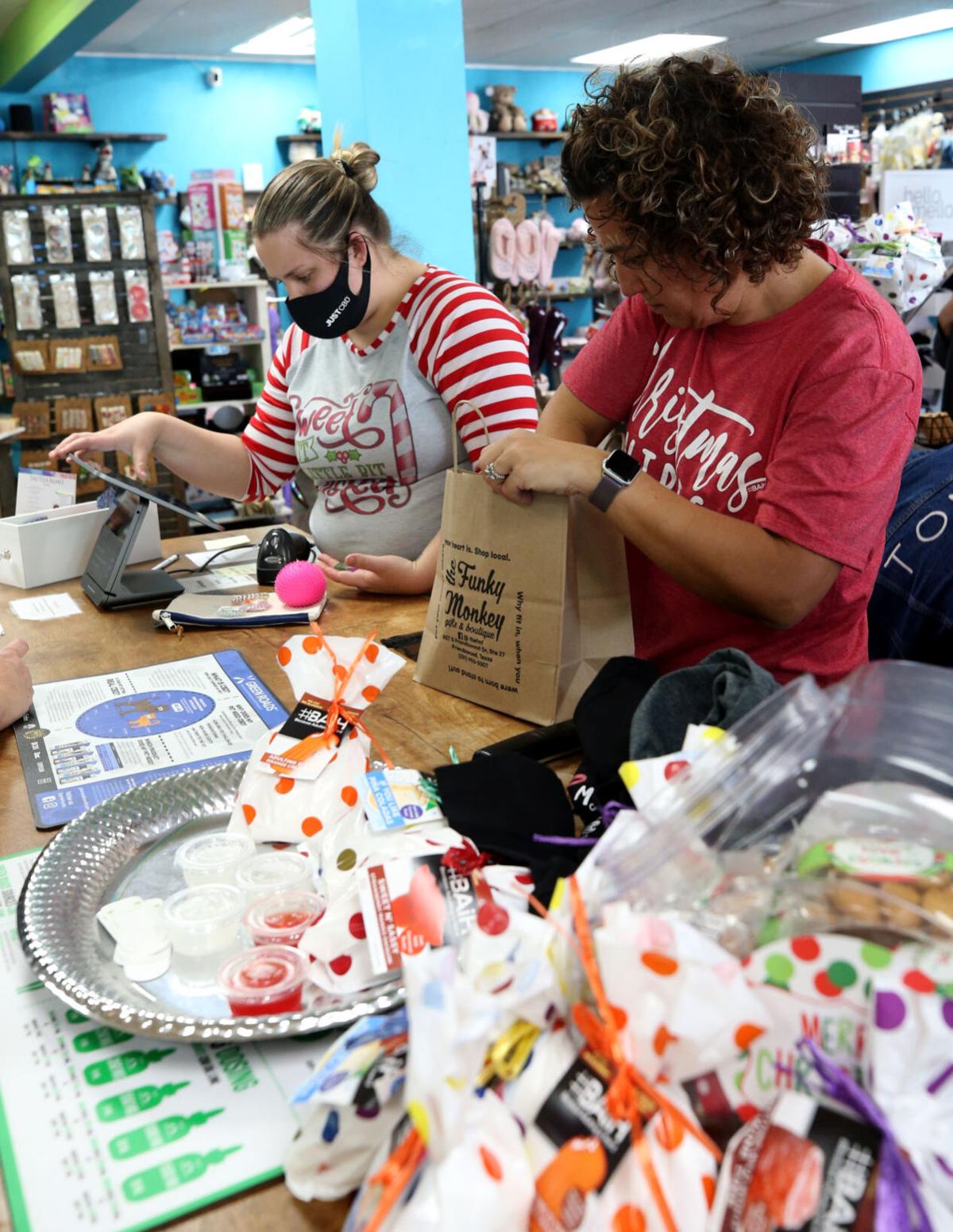 Breanne Coyle, left, and Elita Caldwell, owner of The Funky Monkey in Friendswood, ring up a customer’s purchases Tuesday, Dec. 22, 2020.

Breanne Coyle bags a customer’s purchase at The Funky Monkey in Friendswood on Tuesday, Dec. 22, 2020.

Breanne Coyle, left, and Elita Caldwell, owner of The Funky Monkey in Friendswood, ring up a customer’s purchases Tuesday, Dec. 22, 2020.

Holiday shopping is giving a much-needed sales injection to shops across the county, but many retailers say they’re still facing pandemic-related challenges and worry about the weeks to come as governments impose a fresh round of measures to curb the spread of COVID.

Galveston County businesses have fared better than some nationwide during the pandemic, but the start of 2021 could bring even more closures and capacity restrictions without that Christmas-shopping boost.

People have been buying presents at the shop, especially in the past week when it was too late to order online, she said.

“We’re about break-even with last year,” Caldwell said. “In this year, that’s about as good as you can get.”

‘DAGGER IN THE HEART’

But even strong holiday shopping won’t make up for lost sales from pandemic closures and restrictions, Caldwell and other business owners say.

A state trauma service region that includes Galveston County on Monday hit a state-imposed hospitalization threshold, triggering bar closures, suspension of elective surgeries and reduction of capacity in businesses from 75 percent to 50 percent.

Those restrictions took effect Tuesday morning and will stay until COVID-related hospitalization rates are less than 15 percent for seven consecutive days as measured by the state.

That’s a big disappointment for businesses relying on holiday shopping, said Gina Spagnola, president and CEO of the Galveston Regional Chamber of Commerce.

“It’s a dagger in the heart,” Spagnola said.

This year already has been tough on businesses, and many shops have been relying on the holiday season to make gains or break even, Spagnola said.

The holiday season normally accounts for 20 percent of the retail industry’s annual sales, The Associated Press reported. But from Oct. 30 through Dec. 14, consumer spending is down 5.4 percent compared with the same time last year, according to JPMorgan Chase & Co., the bank and financial services company.

Along with closures, retailers and other businesses are combatting consumer fear of the virus, trends that are taking their toll. More than 40 U.S. retailers have filed for Chapter 11 bankruptcy and more than 8,600 stores have closed this year, according to The Associated Press.

A steady stream of tourists, many from Harris County, eager to get out of the house, has helped shops in Galveston County.

People from Sugar Land and Katy have driven to Urban Gypsies for holiday shopping this year and revenues have been healthy, she said.

“I can’t really tell that we were any less than last year,” Barzilay said.

Barzilay isn’t anxious about what 2021 will bring because she feels like she has a loyal customer base, she said.

The holiday season is important to the restaurant and bar industry too, said James Clark, director of operations and managing partner of Mosquito Cafe, 628 14th St. in Galveston, and president of the Galveston Restaurant Association. People are still eating out when they go shopping, but the typical holiday parties that give businesses big boosts aren’t happening this year, he said.

The good news is people are still eager to get out of the house, Clark said.

And many people are making an effort to shop locally, said Alicia Cahill, owner of The Kitchen Chick, 2402 Market St. in Galveston.

“They’re always trying to give us a shot at their business,” Cahill said.

One COVID issue has been backorders of some items the shop normally carries, which is a global problem, Cahill said.

“The availability of certain things is really challenging,” Cahill said. “I probably have like 35 backorders.”

So even if people want to support her shop early next year, she may not have what they’re looking for, Cahill said.

TOO LATE FOR SOME

But for some businesses, the holiday season didn’t come soon enough or wouldn’t have made a difference.

Once restaurants were allowed to reopen, people tended to go there for a drink, rather than getting take-out from the brewery, she said.

“I don’t blame in any way the restaurants,” Hutchings said. “I’m glad they were able to open at 75 percent capacity. The fault is completely on Gov. Abbott.”

The state’s offers to allow bars to relicense as restaurants didn’t help either because it was too expensive to install a kitchen, Hutchings said.

Other small businesses, like Realtors or homebuilders, have been doing fairly well.

For retailers, the holiday season is critical, he said.

“I think it’s very fair to say that pretty much all business is still very concerned for the next several months,” Jeffcoat said.

If approved, the new $900 billion stimulus package proposed by Congress this week would include money for small businesses and that’s good news, Jeffcoat said.

But it’s also indication that there are still tough times ahead, he said.

“This wouldn’t be happening if we all didn’t believe that there’s still significant assistance that’s necessary for businesses of all kinds,” Jeffcoat said.

But stimulus money, while helpful, isn’t the answer, Spagnola said. She wants to see an end to the closures, she said.

“It just has to stop,” Spagnola said. “When does it stop?”

Spagnola is hopeful business will return to normal when a vaccine is more widely distributed, but she’s worried about more closures in 2021, she said.

Many business operators aren’t sure they’ll make it to the end of next year, she said.

The first part of next year is what Caldwell is worried about, she said.

Normally, the Houston Rodeo drives some early winter sales for The Funky Monkey, but that’s been delayed until May this year, Caldwell said.

“We spent the year preaching you have to support our small businesses,” Caldwell said.

She hopes people keep listening to that message in 2021, she said.