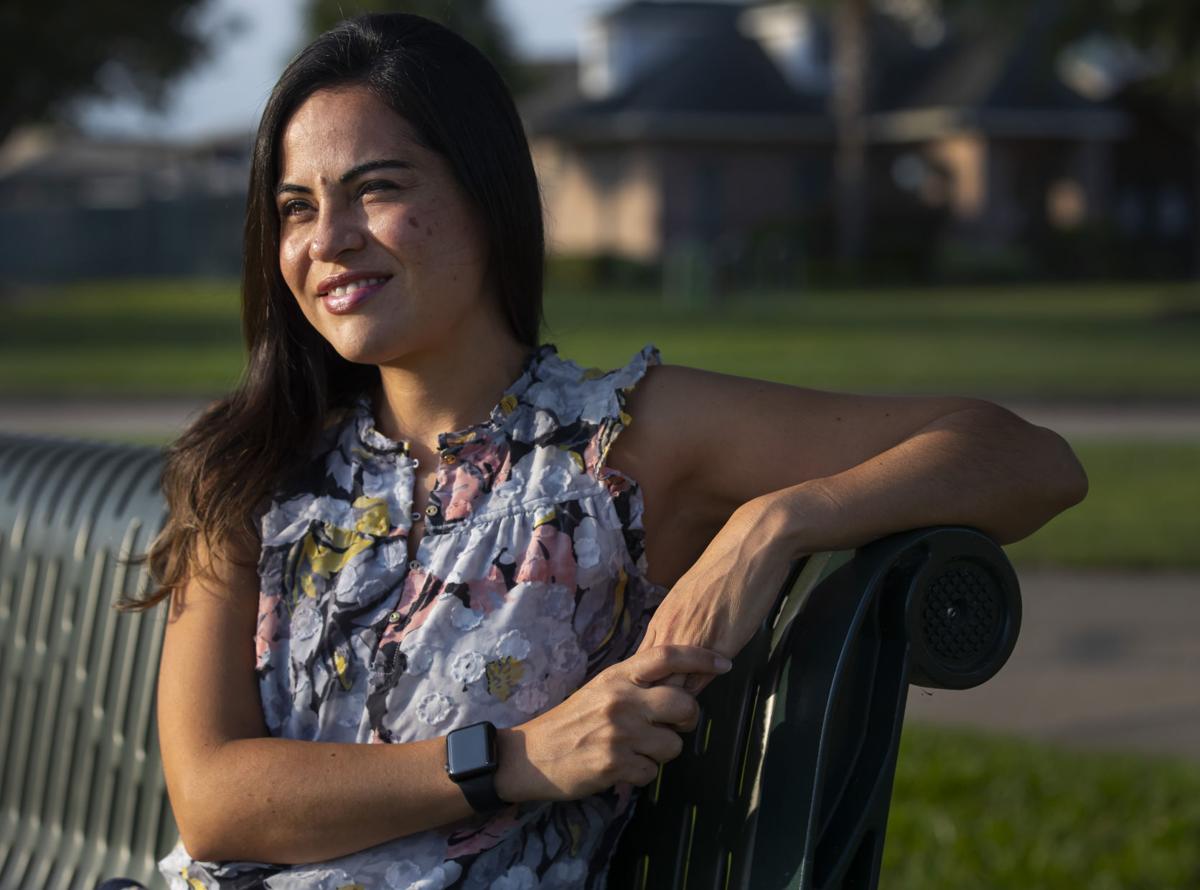 Esther Aviles is participating in a coronavirus vaccine trial by the University of Texas Medical Branch. 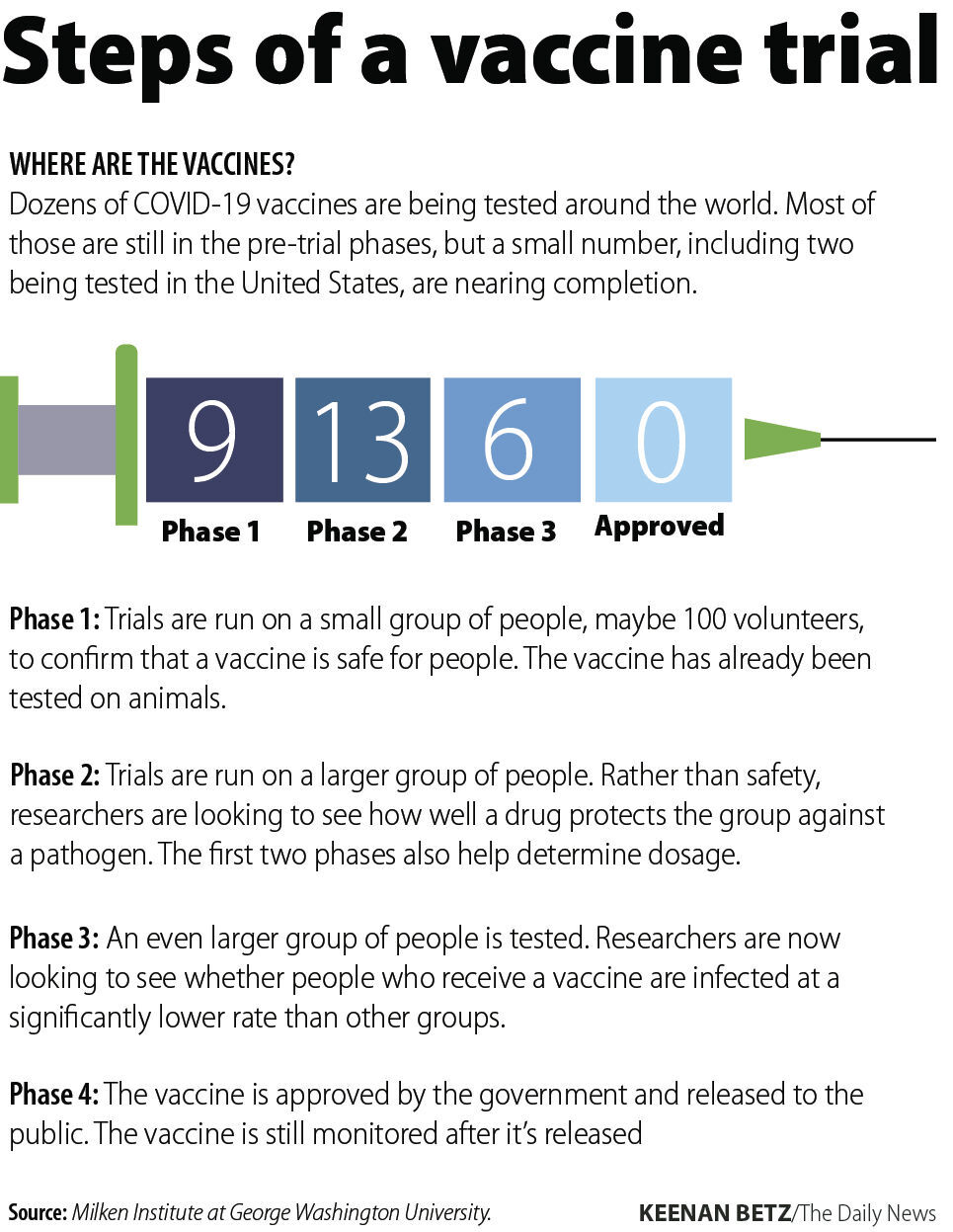 Esther Aviles is participating in a coronavirus vaccine trial by the University of Texas Medical Branch.

Esther Aviles doesn’t know whether the shot she got is protecting her against COVID-19.

But Aviles, a music teacher from League City, is hopeful that even if it doesn’t totally protect her from the virus, it still will help save some lives.

Earlier this summer, Aviles went to the University of Texas Medical Branch and got a shot in her arm. The shot, part of the COVID-19 trial, might have been a potential protection against the coronavirus. It also might have been a placebo.

“I am definitely the rat,” Aviles said. “I haven’t had any issues since getting the vaccine itself. I didn’t feel any different than other vaccines I’ve gotten in the past. It didn’t feel anything worse than that.”

Aviles is among anywhere from 500 to 1,000 people in the Galveston County area who are participating in COVID-19 vaccine trials, said Dr. Richard Rupp, the director of clinical trials and clinical research at the University of Texas Medical Branch.

Participants in Galveston County are among tens of thousands of people participating in trials across the country, Rupp said. The trials at the medical branch are for two vaccines, one being developed by Moderna and another by Pfizer, Rupp said.

Both vaccines are in Phase 3 of development, meaning they’ve been safety tested in smaller groups and should be near where they need to be for mass production, Rupp said. Phase 1 trials test about 100 people at a time. Phase 2 trials test about 1,000. Phase 3 trials can involve 10,000 or more volunteers.

The goal of the larger study is to have enough data to track and to possibly identify rarer side effects, Rupp said.

Aviles volunteered to be a study participant after seeing a post about drug trials on NBC News’ Instagram account. It’s not the type of thing she ever thought she’d be volunteering for, but the opportunity to help protect other people — including members of her own family — motivated her to participate, she said.

But then the COVID-19 economic fallout caused her to lose her job as a music teacher in Denver, and she found herself living in Texas with her sister and having more interaction with her mother, who has respiratory issues, she said. Then her 14-year-old niece contracted the virus and had to be quarantined.

“It just became real,” she said. “I just wanted to do something.”

Aviles doesn’t know whether she actually got a sample of the coronavirus vaccine.

As a participant in a double-blind study, she possibly received a placebo, a substance that has no therapeutic effect used as a control in testing new drugs.

It’s now her job for the next two years to track her health and report back possible side effects to researchers.

The people who received vaccines in the trial won’t be done with their work even after the general public begins receiving the vaccine, Rupp said. But tracking the test groups will help drug developers know sooner whether the vaccines have slow-to-develop side effects or their protective measures wear off, he said.

“I don’t think any strange things are going to show up,” he said. “But the question is when and if the immunity starts to fade, when is that going to happen and does that affect the kind of illness somebody gets.”

Federal officials haven’t announced a specific date for the release of a coronavirus vaccine, and this past week brought conflicting messages from some quarters about how soon a vaccine will be ready.

In June, The U.S. Department of Health and Human Services announced Operation Warp Speed, an initiative to develop a vaccine and make it available to the public by 2021.

The operation has affected how quickly proposed vaccines — dozens are in development in labs around the world — are moved through regulatory processes. Rupp noted that the Pfizer vaccine the medical branch is helping test wasn’t developed through the normal three-phase process.

“They’re doing it differently than anybody ever does it to speed things up,” Rupp said. This sped-up process has been cleared by the U.S. Food and Drug Administration, he said.

How fast it leads to a vaccine remains to be seen. Earlier this week, the U.S. Centers for Disease Control and Prevention sent a letter to states urging them to be ready for a “large-scale” distribution of vaccines by Nov. 1.

That urging came days after President Donald Trump promised during his acceptance speech at the Republican National Convention that a vaccine would be available before the year’s end.

The chief scientist of the World Health Organization, meanwhile, on Friday said the agency hoped a vaccine rollout could begin by mid-2021.

Dr. Anthony Fauci, the director of the National Institute of Allergy and Infectious Diseases, also has said a vaccine wouldn’t be ready until 2021.

Stephen Hahn, commissioner of the Food and Drug Administration, last week told Financial Times the agency might be willing to authorize a drug before all of its trials are complete, if the drug appears safe.

‘PEOPLE WILL WANT IT’

When a release of the vaccine approaches, the public should brace for a likely shortage because of high demand, Rupp said.

Drug companies experienced such shortages in 2009 when they created and released a H1N1 vaccine, he said. There was a rush for that drug at the time.

Rupp compared the possible coming fervor to instances in which people panic-bought supplies early in the COVID-19 pandemic.

“People will want it, and the vaccine will be in short supply,” he said. “Whenever there’s a shortage, more people will want it just because it’s short. It’s the whole toilet-paper thing again.”

The first vaccine won’t be offered to children, because it isn’t yet being tested in that group, Rupp said. And even if one vaccine looks promising, there still will be calls for more people to join in trials for other vaccines, he said.

“There are many more trials to come,” he said.