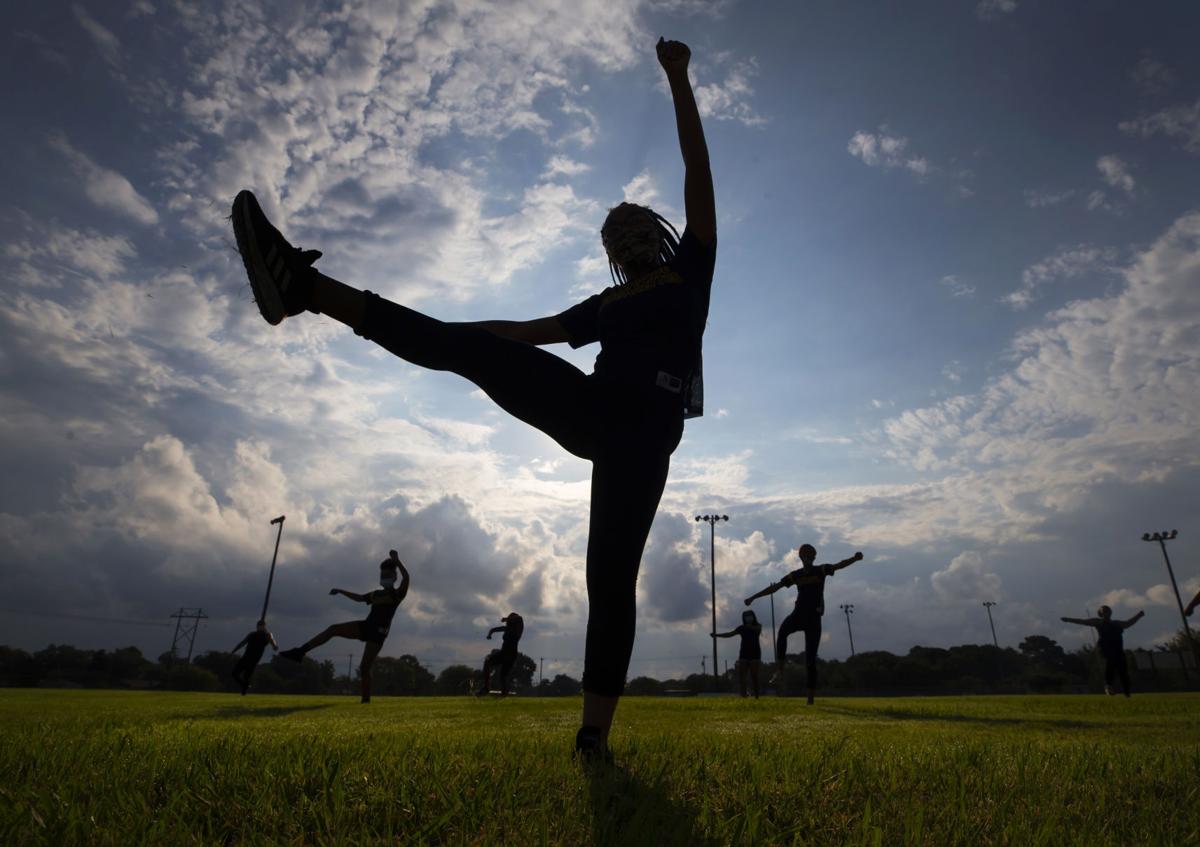 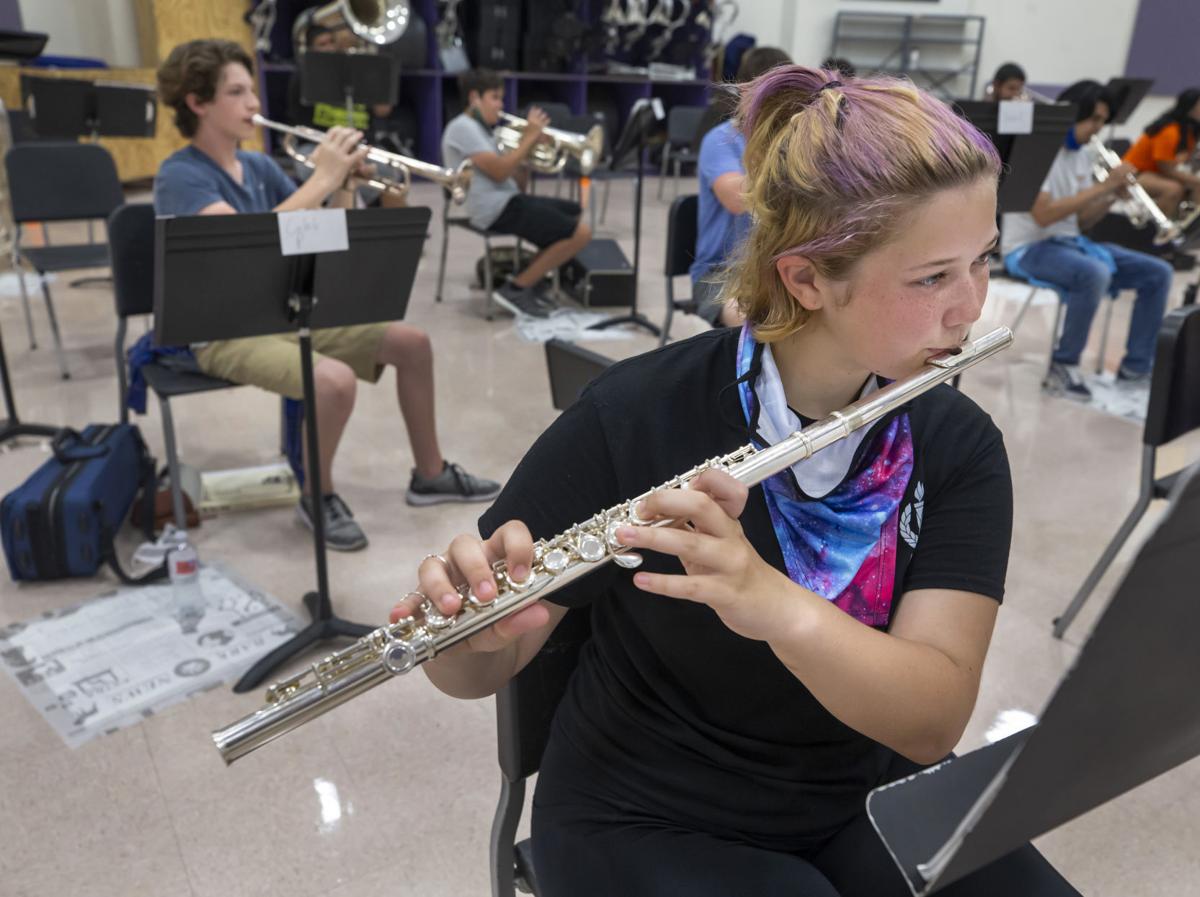 Sarah Milina and other Ball High School marching band members play their instruments during a practice at the school in Galveston on Friday, July 31, 2020. 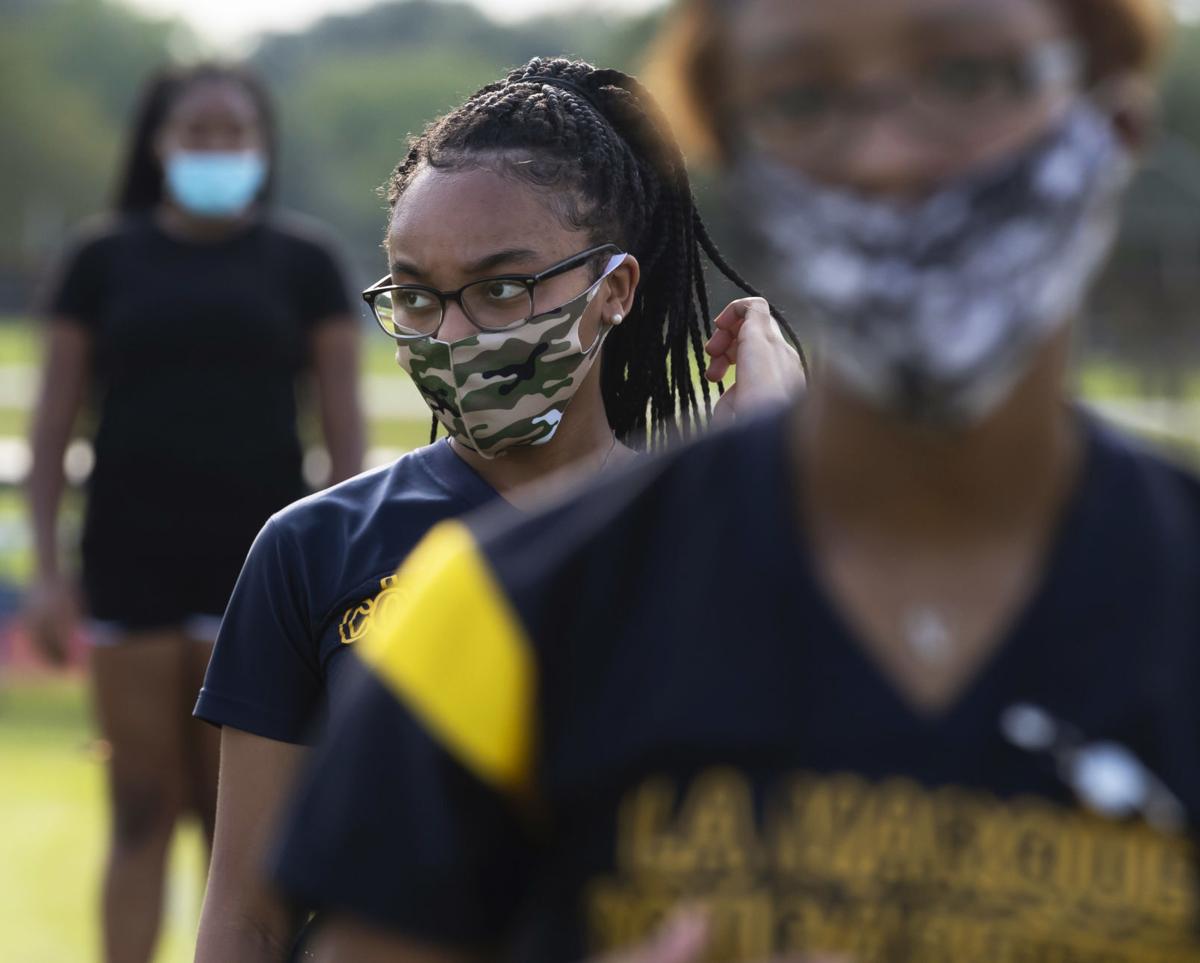 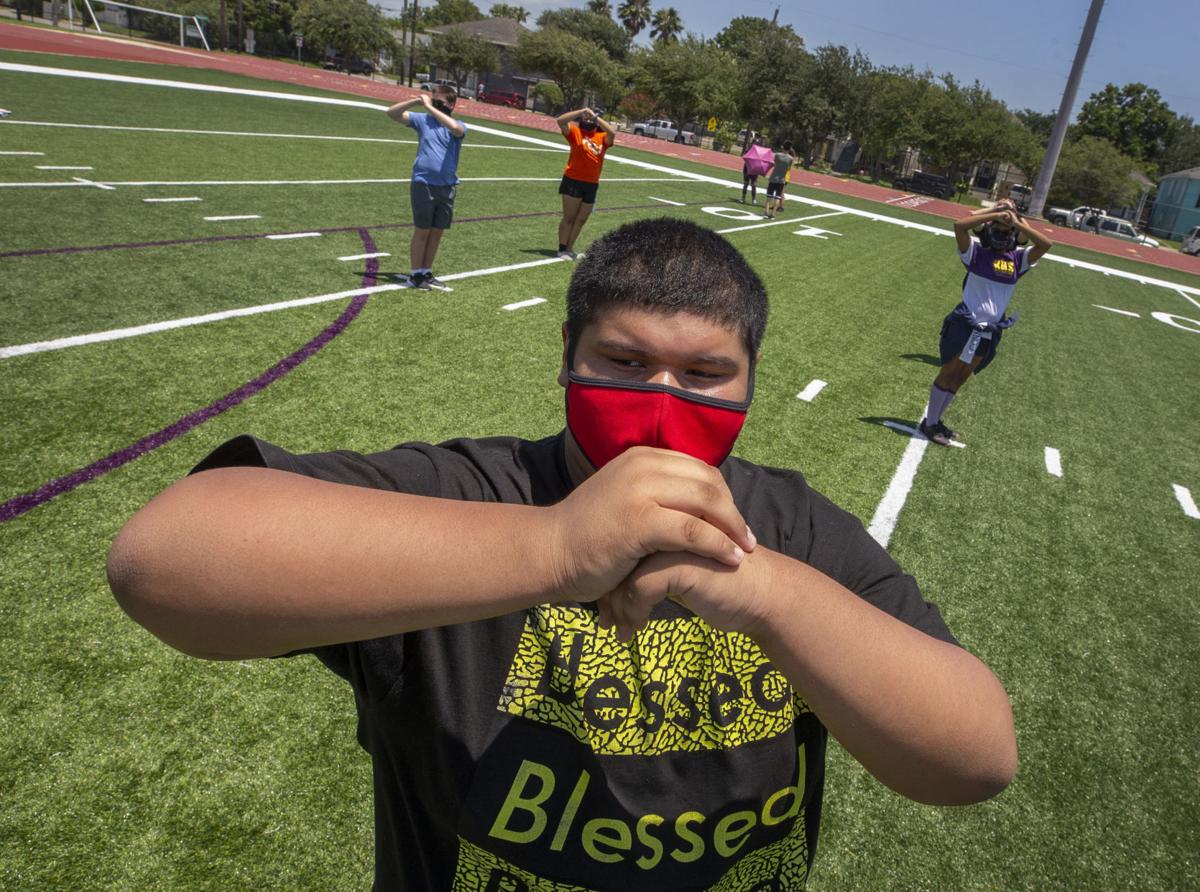 Ball High School freshman George Miranda and his fellow marching band members learn steps during a practice at the school in Galveston on Friday, July 31, 2020. 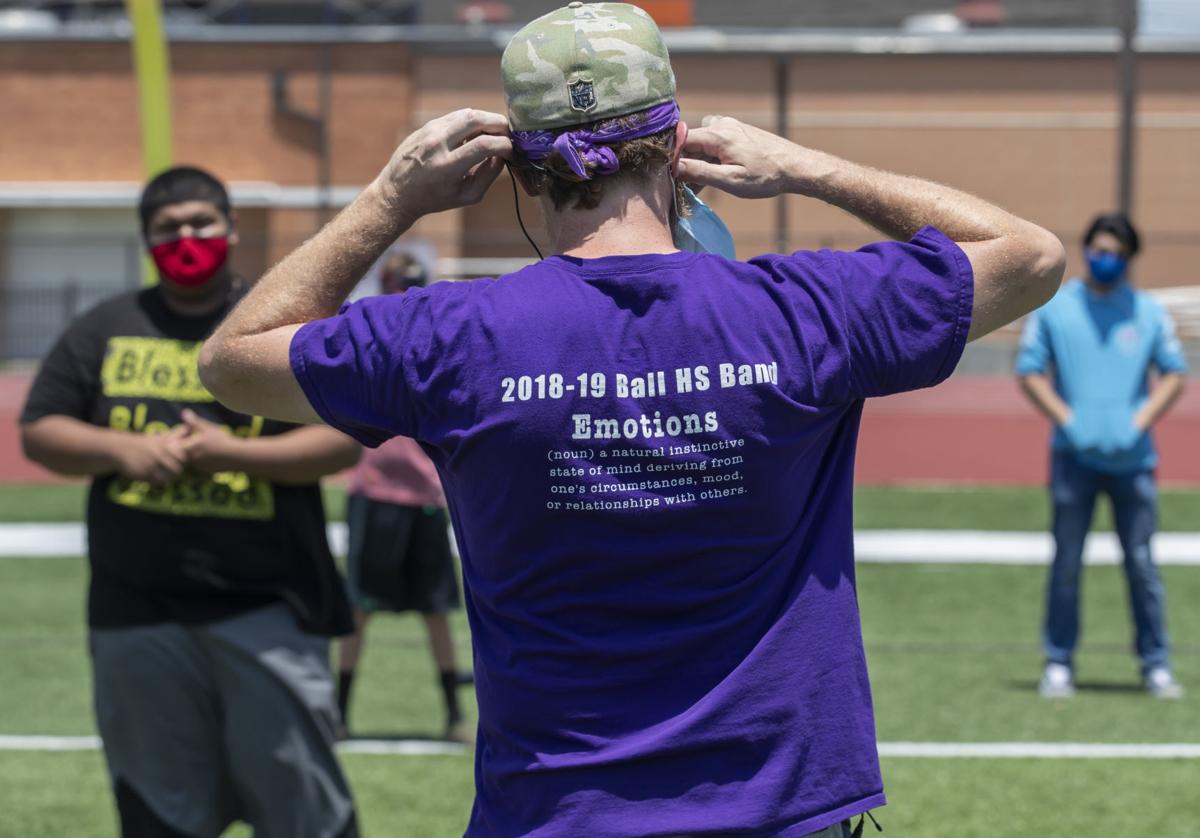 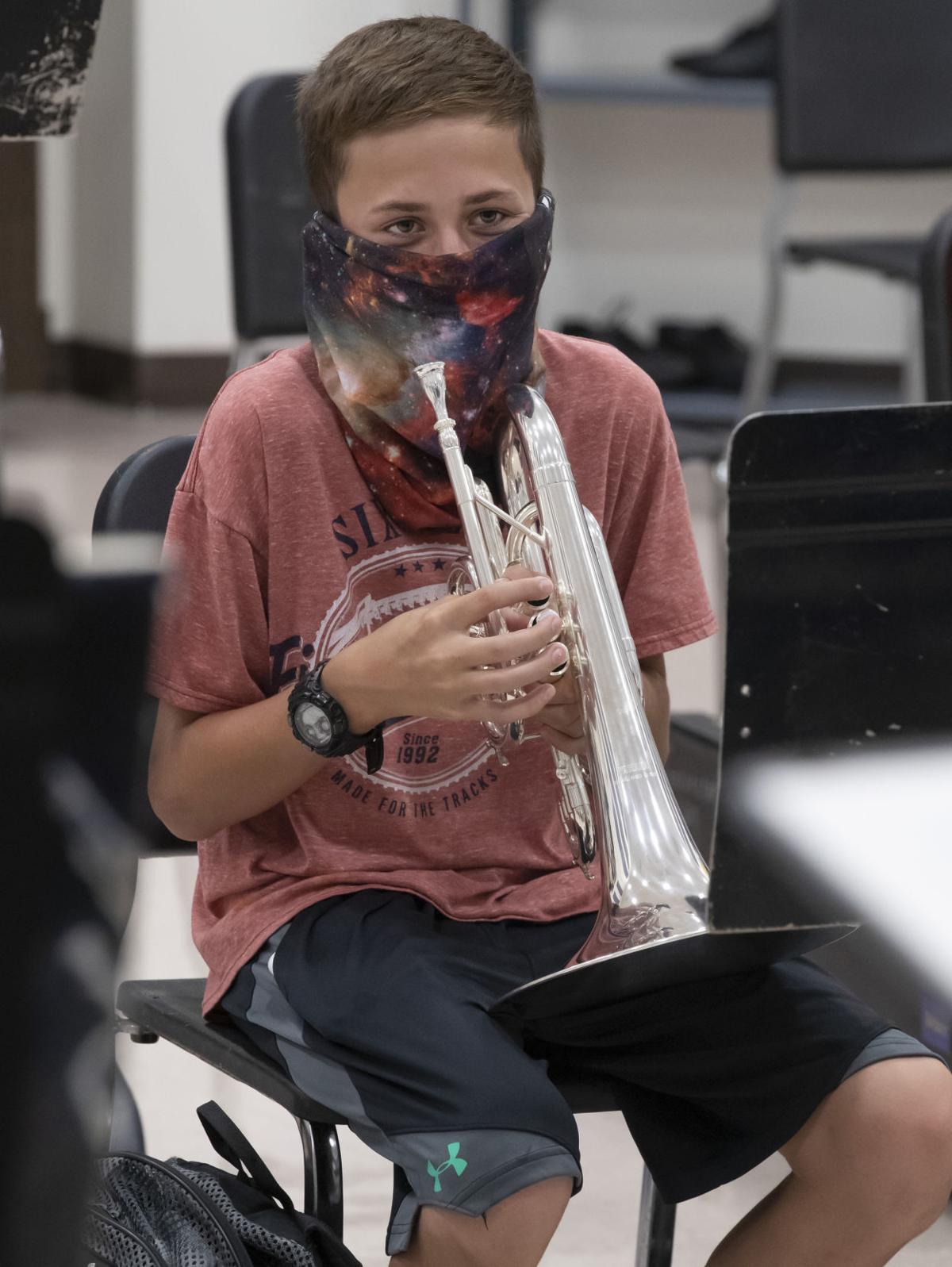 Ball High School freshman Cole Harman readies his instrument during a practice at the school in Galveston on Friday, July 31, 2020.

Sarah Milina and other Ball High School marching band members play their instruments during a practice at the school in Galveston on Friday, July 31, 2020.

Ball High School freshman George Miranda and his fellow marching band members learn steps during a practice at the school in Galveston on Friday, July 31, 2020.

Ball High School freshman Cole Harman readies his instrument during a practice at the school in Galveston on Friday, July 31, 2020.

Choirs standing together on risers, dance teams locking arms, performers rushing madly backstage during theater shows — it’s unclear whether any of that will happen this year.

As Galveston County schools prepare to reopen for academic learning, instructors also are faced with the challenge of teaching fine arts classes that by nature bring students together — at a time when people are meant to keep their distance.

The coronavirus pandemic means students might not experience normal practices or performances this year. Rather, teachers and young artists are turning their sights to honing skills. Students and school administrators are generally optimistic about the opportunity to focus on the basics that the coming school year presents.

Both social distancing guidelines and the virtual setting will change the normal instruction most Galveston teachers use, he said.

“We interact with our students,” Duncan said. “We move around the classroom.”

But there are ways to hold those classes safely, he said.

Band, orchestra and choir students can space out and wear masks, Duncan said. Students who play horns or woodwind instruments won’t be able to cover their mouths while they’re playing, but they can do so any other time, he said.

Other arts, like theater, that by nature require more interaction might be harder, but it’s doable, he said.

The University Interscholastic League, which oversees student competition in Texas, has issued guidance that includes screening all students for COVID-19 symptoms, having everyone wear face coverings, thoroughly cleaning practice areas and opening windows to circulate air.

Art supplies will be prepackaged for each student, costumes and props will be sanitized between use, and students will be kept separated in the classroom, he said.

But some districts, like Hitchcock Independent School District, are conducting all fine arts instruction virtually, except for after-school practices, Superintendent Travis Edwards said.

Friendswood Independent School District is taking the same approach, with virtual instruction for fine arts classes during the day for the first nine weeks, spokeswoman Dayna Owen said. Students will be able to attend after-school practices, she said.

After that, students who select virtual instruction will learn in real time and independently, Kinser said. Students in performance-based fine arts will be expected to attend after-school rehearsals, Kinser said.

It’s harder to hear exactly what students should correct in their playing over a web meeting, Braselton said. Teachers will unmute each student’s screen one by one to listen as they play, he said.

“There are a lot of learning curves right now, if you can call it a curve,” Braselton said. “It’s more like a line that goes straight up.”

Many school districts are still unclear about how big performances will happen or whether they’ll happen at all. Some districts might consider small group performances.

The situation isn’t ideal, but most county schools are spending the year on enhancing their skills, rather than on big performances, they said.

Students don’t normally want to work on their basics, like musical scales or vocal exercises, but this will be a good time to do that, Duncan said. Theater students can practice soliloquies, and musicians can work on solos, he said.

“We want them to come out with the skills they need,” Lyon said.

The district can connect students with teachers across the district, not just at their school. For example, a trumpet student at one school might be able to connect virtually with a teacher specializing in trumpet from another school, Washburn said.

Despite the changes, students seem to be staying positive.

Masswi is a drum major, or student marching leader, in the band.

Instead of focusing on marching season, Masswi will be working on his video audition for all-region band, a UIL event, he said.

“We’re all going to hone in on our musical talent,” Masswi said.

STICKING WITH THE ARTS

But it will be different and students are going to have to work harder to build that social connection that has become a key part of grade school fine arts programs, said rising Ball High School drum major junior Kaylhan Garcia.

Garcia, who plays clarinet and synthesizer, is worried about creating team collaboration with the rising freshmen, she said.

“They didn’t have the same experiences we did,” Garcia said. “We need to figure out a way to make them more united.”

Band opens up scholarship opportunities, so she wants other students to push through the year and stick with the program, she said.

“We just have to keep a positive mindset,” Garcia said.

It’s times of uncertainty such as this when people most need the arts, said Ayanna Hudson, director of arts education at the National Endowment for the Arts.

“We also have research studies that show engagement in the arts helps to reduce stress, and now we’re in a very stressful environment,” Hudson said.

“The other opportunity, outside of practicing your own direct skillset, is the opportunity to explore other artistic disciplines,” Hudson said.

Artists are posting their work or videos of their performances online now more than ever, which could introduce students to art forms they hadn’t thought about before, she said.

Students are ready to get back into the swing of their arts education, Lyon said.

This year, performance arts will be different from the Friday night lights and big concerts students are used to, but they should stick with their programs, Braselton said.

“It’s such a bigger picture than the right now,” Braselton said. “The things you’re going to learn are going to be lifelong things.”