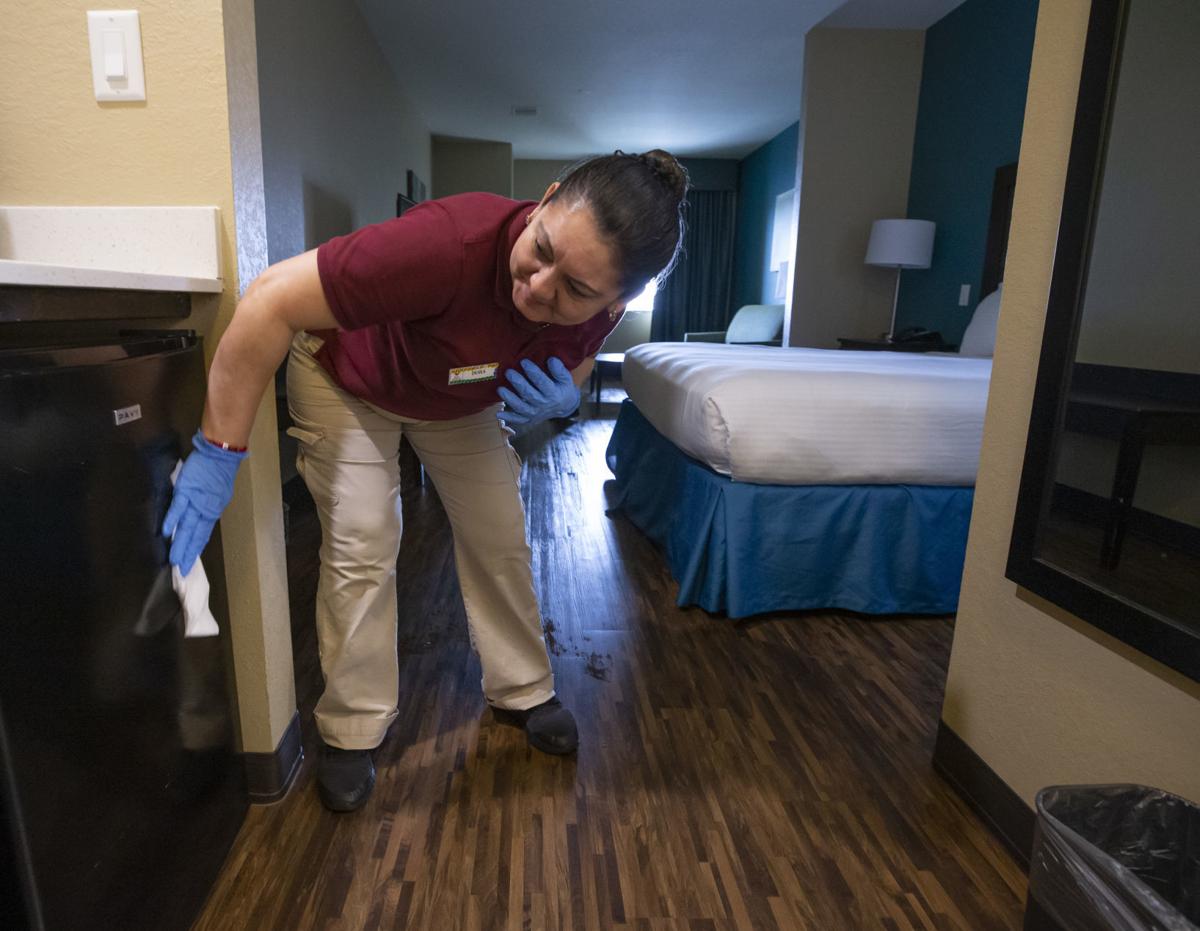 Dora Herrera wipes down a mini-fridge while cleaning a vacant room at the Best Western Plus hotel in Galveston on Thursday, March 26, 2020. 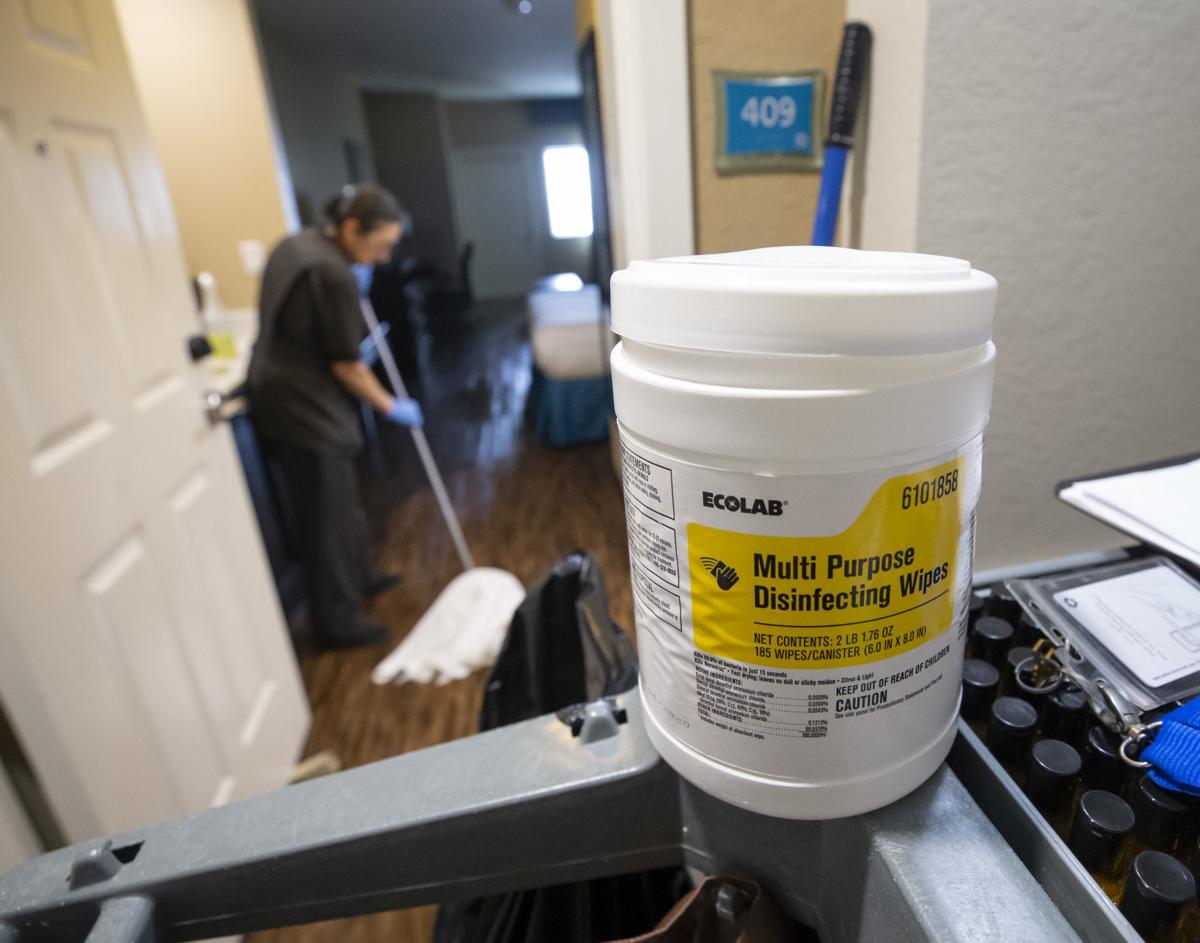 A package of disinfecting wipes rests on a cart as Lulu Aguilar mops a vacant room at the Best Western Plus hotel in Galveston on Thursday, March 26, 2020. 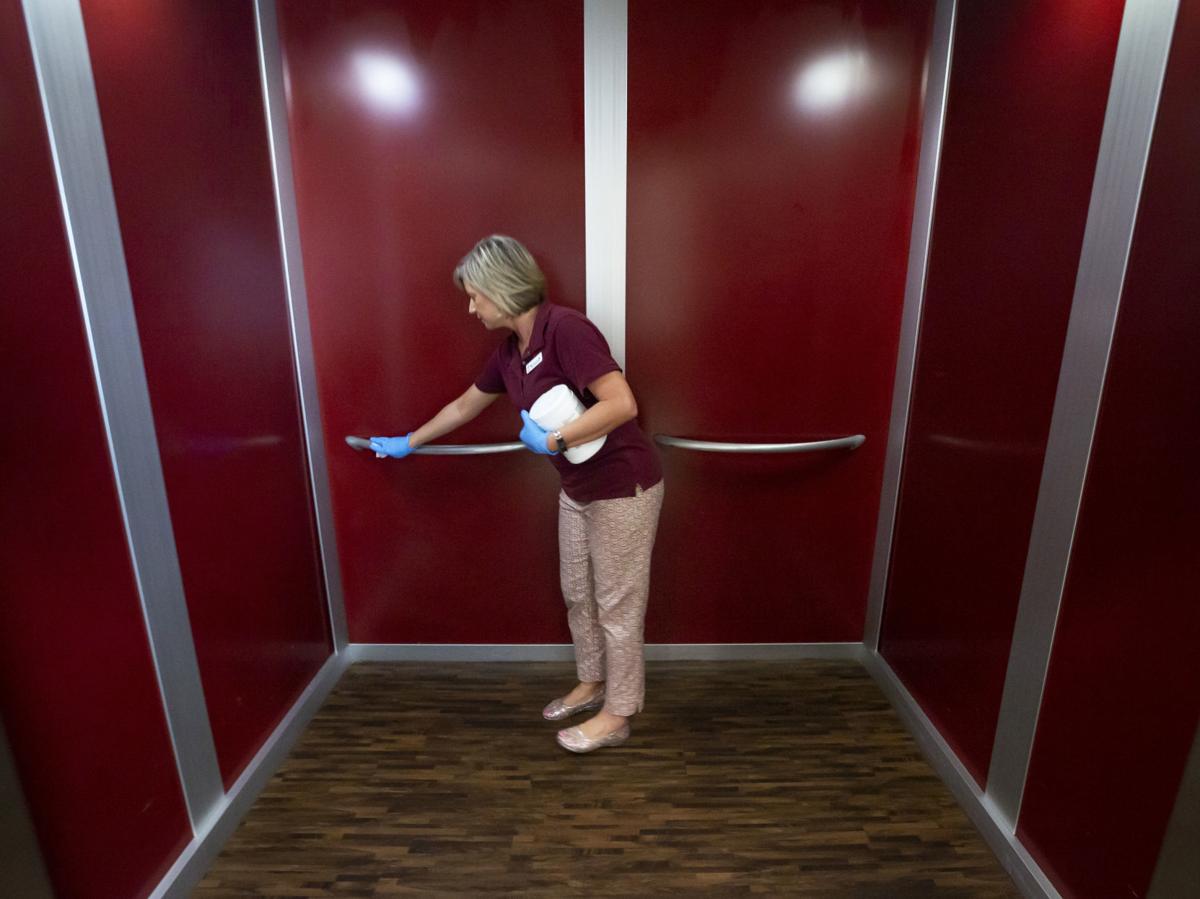 Canyon Wiebelhaus wipes down the handrails in an elevator at the Best Western Plus hotel in Galveston on Thursday, March 26, 2020. To help ensure the safety of guests, employees wipe down high-traffic areas of the hotel each hour. 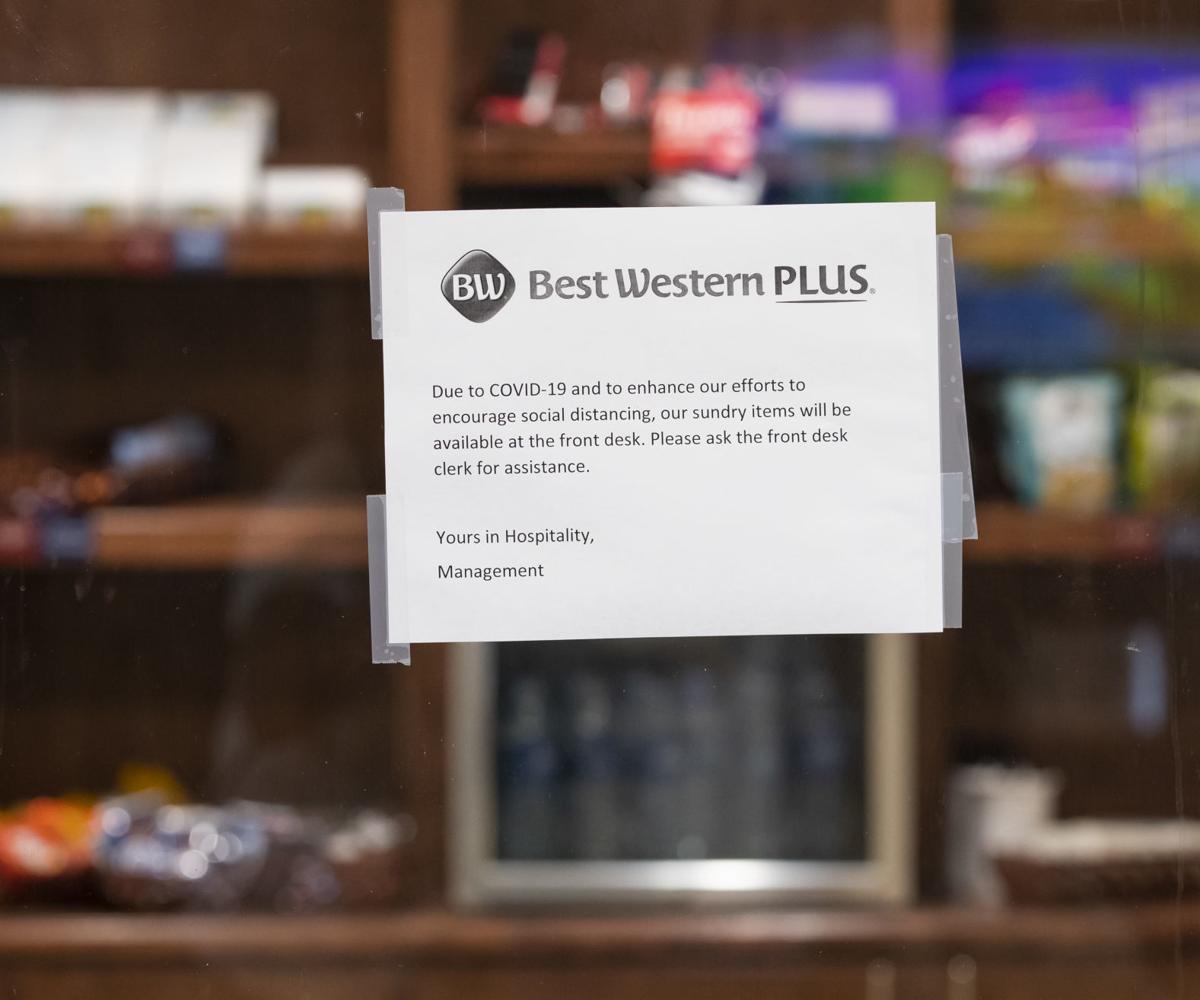 A sign on the door of the mini market at Best Western Plus hotel in Galveston notes one of the changes the hotel has made to address the coronavirus pandemic.

Dora Herrera wipes down a mini-fridge while cleaning a vacant room at the Best Western Plus hotel in Galveston on Thursday, March 26, 2020.

A package of disinfecting wipes rests on a cart as Lulu Aguilar mops a vacant room at the Best Western Plus hotel in Galveston on Thursday, March 26, 2020.

Canyon Wiebelhaus wipes down the handrails in an elevator at the Best Western Plus hotel in Galveston on Thursday, March 26, 2020. To help ensure the safety of guests, employees wipe down high-traffic areas of the hotel each hour.

A sign on the door of the mini market at Best Western Plus hotel in Galveston notes one of the changes the hotel has made to address the coronavirus pandemic.

Hotel occupancy across the island plummeted last week to 31.2 percent, down from 68.7 percent a year ago, as growing fears about the spread of coronavirus effectively halted travel and city officials asked visitors to stay away.

Although hotels haven’t been ordered to close, city leaders are telling tourists and visitors to stay away from an island that typically attracts 7.2 million visitors each year.

Occupancy at both Byrd’s hotels is 10 percent or less, he said.

Byrd has had to furlough 80 percent of his hotel staff and reduce employees to 10 people or less at each hotel, he said.

“You have to make a decision based on the ability of the company to be solvent,” Byrd said. “Every furlough is associated with a name of a team member that you created a relationship with.”

Byrd expects his hotels eventually will have near zero occupancy, he said.

Even before the city on March 16 issued its order to shutter all bars and tourist attractions and limit restaurants to take-out or delivery only, hotels were only half full, according to data from Galveston Park Board of Trustees, which manages tourism.

Full-service hotels were 29 percent full from March 15 to March 21, compared with 74 percent during the same week a year ago, according to the data.

In limited-service hotels, occupancy was 32.9 percent from March 15 to March 21, a week in which occupancy was 65.2 percent last year, according to the data.

Occupancy is less than 5 percent and Gandhi doesn’t expect any more tourists for the foreseeable future, he said. Gandhi has closed all the public areas, including the pool, and increased sanitation practices, but people just aren’t traveling right now, he said.

Hotels, along with short-term rentals, collect hotel occupancy tax revenues, which in Galveston accounted for $18.2 million last year, according to park board data. This money is used to pay for Galveston Island Beach Patrol, for some operations at the park board, for the city’s arts and historic preservation programs and Mardi Gras, among other things.

“While we are still getting calls every day, our reservations are down considerably this week at our properties,” Miles said. “Rather than cancel their reservations, we hope our guests will consider rebooking their travel plans to later in the year.”

It’s hard on employees too, said Pricilla Pippin, who was furloughed from Grotto Ristorante, a restaurant at the San Luis Resort & Spa, 5222 Seawall Blvd.

Pippin was furloughed last week but has a second job to fall back on, she said.

“I have coworkers who don’t have resources,” Pippin said.

Galveston’s market is very resilient, Byrd said. But if Galveston can’t make money during its summer season, the most productive time of year for many businesses, including hotels, things will be tough, he warned.

Soooo... the city shut down STRs because the STR occupancy rate was supposedly 100% (actually 10%) and hotel occupancy was 6% (actually 30%)?

The city should start using hotel occupancy taxes to help hotels like it was intended. It should not be used for street festivals when hotels are suffering. The large events should be placed away from where citizens live or cancelled for a year. This is a serious problem that no person can predict repeating itself in the coming years. The Lone Star Rally is a health hazard. This is an eye opener that New Orleans has seen already.

Bailey, as usual you're looking at facts rather than suppositions, the latter of which politicians excel at. Here is another developing fact-based story that will give folks an idea how tenuous the statistical assumptions were that prompted the implosion of our local and national economies.

Neil Ferguson, an Imperial College of London quantitative analyst who less than two weeks ago projected "terrifying" (his words) predictions of half a million deaths in the UK from COVID-19 has now reduced that figure by 96%. He is now projecting about 20,000 deaths based on his computer model's development of the disease in the UK, according to a story just published in New Scientist. He goes on to say one-half of those folks who succumbed would have done so from their underlying conditions by year's end. Imperial College has been called some of the best infectious disease modellers on the planet.

Why is this relevant to us? Because Ferguson's predictions included 2.2 million deaths in the US based on the same earlier data and which our national response was based on, which we may assume is largely no longer the case. Is social distancing and other common sense approaches helpful to slow the spread. Without a doubt. Is imploding your economy to thwart a very bad flu strain a good idea?

Ferguson--who by the way has skin in the game since he tested positive for the virus-- says "We’ll be paying for this year for decades to come."

Meanwhile, the same "leaders" on both sides of the aisle who couldn't be bothered to prepare for a pandemic they all said was inevitable want to condition you to march when and where they tell you out of an "abundance of caution" and "public safety."

We are shortly going to see what these slogans really mean on the ground in Galveston and across the nation. Get ready.