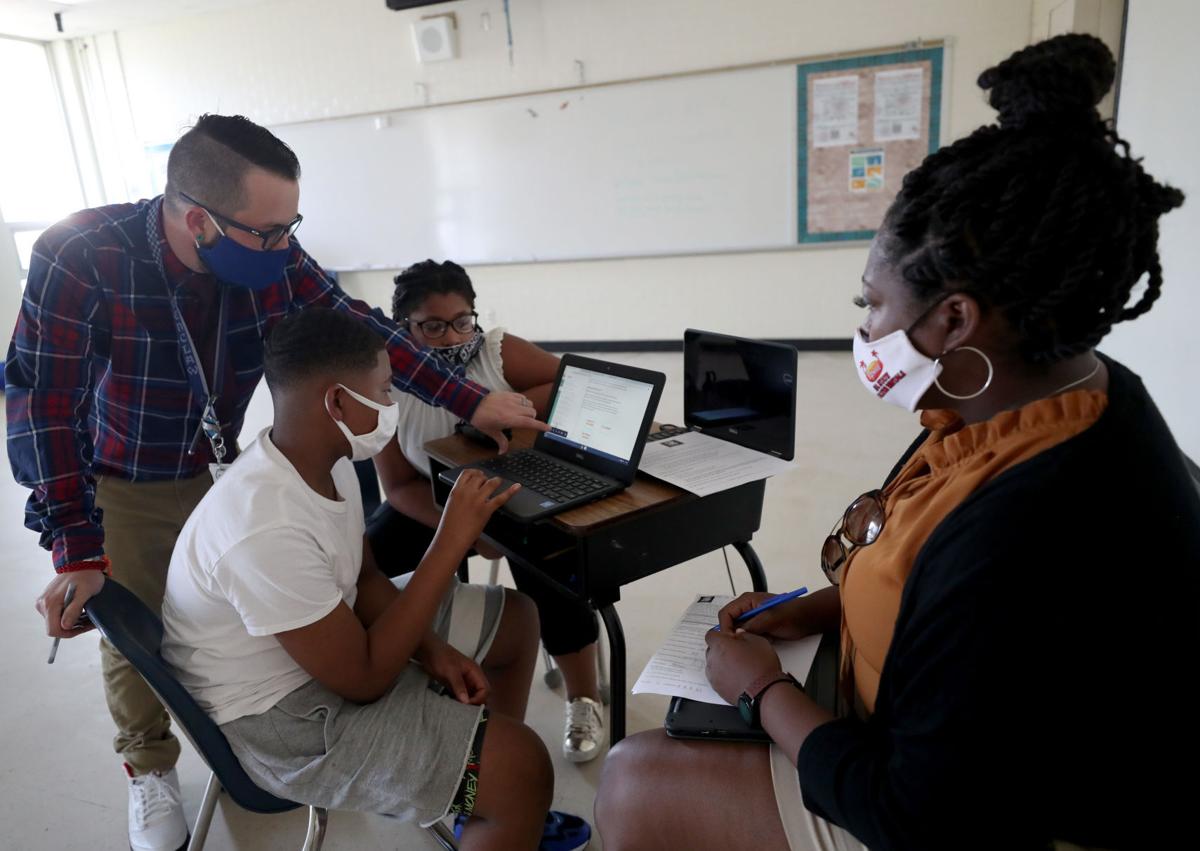 Christina Johnson, right, watches Jon Reese, an assistant principal at Collegiate Academy at Weis, show her children Robert and Reigna Fonteno how to log into the programs and emails they’ll be using for remote and in-person learning as they pick up a laptop and charger at the school in Galveston on Thursday, Sept. 3, 2020. 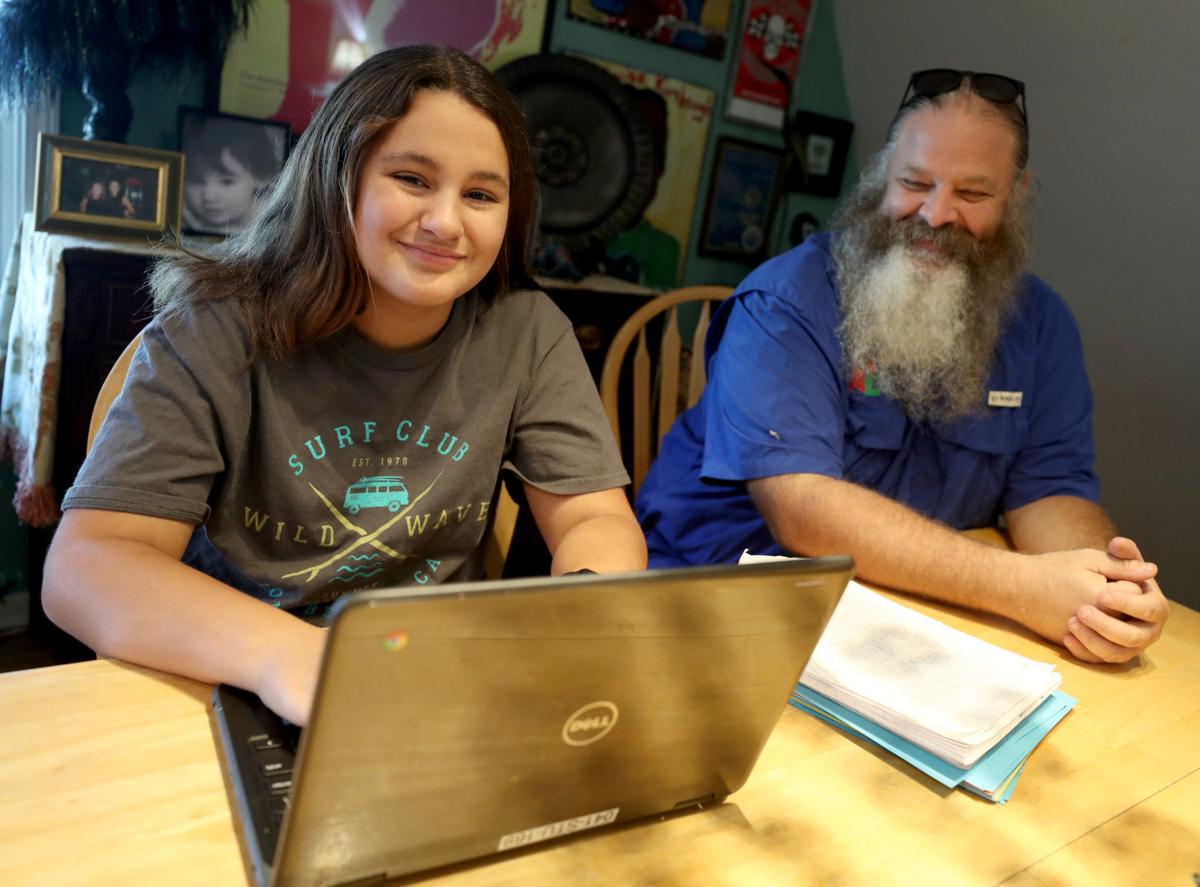 Parker Holland, left, logs into her school work at the dining room table as her father, Wes Holland, watches on Wednesday, Aug. 19, 2020. 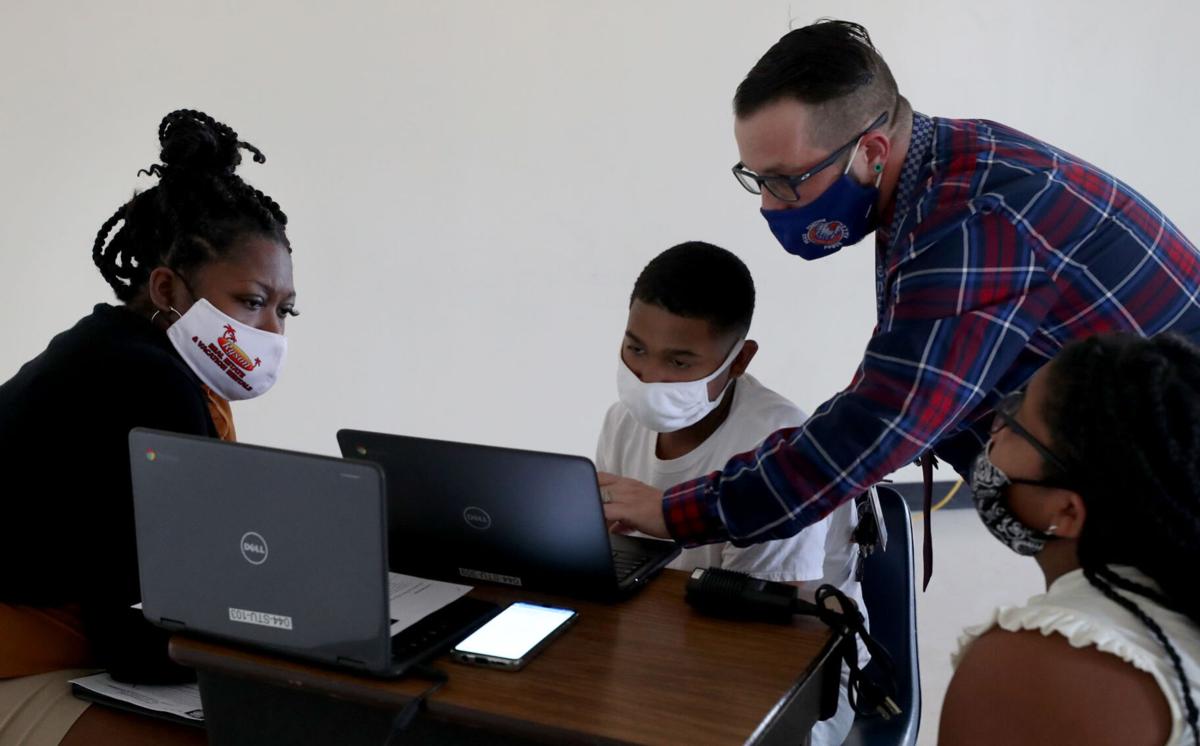 Christina Johnson, left, watches as her children get help from assistant principal Jon Reese. Johnson is concerned about sending her children back to in-class learning, but she feels she has no choice.

Christina Johnson, right, watches Jon Reese, an assistant principal at Collegiate Academy at Weis, show her children Robert and Reigna Fonteno how to log into the programs and emails they’ll be using for remote and in-person learning as they pick up a laptop and charger at the school in Galveston on Thursday, Sept. 3, 2020.

Parker Holland, left, logs into her school work at the dining room table as her father, Wes Holland, watches on Wednesday, Aug. 19, 2020.

Christina Johnson, left, watches as her children get help from assistant principal Jon Reese. Johnson is concerned about sending her children back to in-class learning, but she feels she has no choice.

Thousands of parents across Galveston County faced a choice this fall — virtual or in person.

After hurried school closures this spring as the coronavirus spread and fear about it soared, shuttering business and much of normal life, local school districts are letting parents choose how their children will attend school.

Most county schools are starting with a period of all virtual learning. But after that, parents must decide to keep their children at home taking online lessons or send them into a new and untested socially distanced school setting.

Some parents across the county grappled this summer with the risks and rewards of that choice. But for others, especially working parents, there was no other option.

People who can’t work from home probably are sending their children back to campus at higher rates even if they don’t want to because they don’t have another child care option. Who goes and who stays home might be mostly a matter of means, researchers said, but without good data, it’s still too early to know for certain.

For Galveston resident Christina Johnson, sending middle and elementary school-aged children back to in-person school was a necessity, she said. Johnson works at Ryson Real Estate & Vacation Rentals and is a single parent.

Johnson has been sending her children to the Boys & Girls Club’s Blue Lab.

Johnson will have to send her children to in-person schooling at the end of the month, however, she said. She can’t stay home with her children and do her job, she said.

“I need my job for my children,” Johnson said. “I do it all myself. I need a stable environment.”

Johnson’s children are excited to see their friends, but the return to school makes her nervous, she said. Children like to be close to one another, she said.

“They hug,” Johnson said. “They run up. They give high fives. Some parents send their kids to school sick.”

Of the 33.5 million working people between 18 and 64 years old in the United States with children under age 14, 23.5 million, or 70 percent, are in a family without a possible caregiver, according to the Brookings Institution, a nonprofit public policy organization based in Washington, D.C.

On the other hand, parents with other options are choosing to keep their children out of the classroom for now.

Wes Holland, whose sixth-grader will be entering Austin Middle School, has decided to keep his daughter at home for now, he said.

“I’m leery of the information that we’re actually getting,” Holland said. “I think we’re going to have a huge spike.”

Holland can’t work from home, but his daughter is mature and he trusts her to keep up with her education, he said. But, he also expects her to text him with her lesson progress throughout the day.

“I bought a Wi-Fi camera with voice interaction,” Holland said. “I can check on her fairly regularly.”

But options are definitely limited for parents who have to work in person, she said.

“If they need to pay the rent and that means sending their children to school, they will have to,” Garver said.

And that’s especially true for low-income parents, she said.

Higher-income parents might have more options or be able to afford private school, where class sizes might be smaller, Garver said.

It’s hard to determine how many parents have no choice but to send their children to school, but it’s certainly happening, said Carrie Cutler, clinical assistant professor in the College of Education at the University of Houston.

“Some parents don’t feel like they have any choices and they just have to push forward,” Cutler said.

But it’s unclear exactly what the trends will be, and there’s typically not any one reason parents are making their choices, Cutler said.

“It’s very complex,” Cutler said. “It can’t be cut and dry because everybody’s situation is different.”

The trouble is that there’s really not good data on this trend yet, Garver said.

Some organizations are trying to bridge the gap.

The Boys & Girls Club in Galveston, where Johnson’s children are spending their school days before in-person learning, created the Blue Lab to give parents a place to send their students during the day, Youth Director Bridgett Simmons said.

About 70 students take their laptops and hot spots in every weekday and do their online lessons, Simmons said.

It’s a reality that some parents are sending their children to in-person classes, even if they’re not ready to, Simmons said.

“They may not want their child to return back to school, but they are needing some stability as far as their financing,” Simmons said.

The Galveston Children’s Museum has offered a similar paid program.

Parents already are creating learning pods around the country, where a small number of students get together to complete online schooling, said Nancy Schultz, director and founder of the museum.

At 24 students maximum, the museum’s program is similar.

But for other parents, the decision isn’t just about the job.

Galveston resident Isaul Marines, who works in accounting, has decided to send his 11-year-old and 9-year-old to school, he said.

Marines is working from home. The balance between his work, which requires quiet concentration, and helping his children with online school in the spring was a challenge. But that’s not the reason he’s sending them to school, he said.

“We’ve talked to our kids,” Marines said. “They know how to protect themselves, washing hands, wearing masks, being distant. We can’t live our life closed in the house all day forever.”

He thinks his children will get a better education and more attention by being in the classroom, he said.

“I can be a little nervous, but I’m not fearful,” Marines said.

Some parents have elected to pull their children out of the school system entirely.

Kristina Brown moved from League City to Texas City this summer and, between the stress of the coronavirus and trying to start a new school, decided to homeschool her sixth- and 11th-grade daughters this year.

“I wanted my kids to have stability,” Brown said.

Brown works with her mother at the family owned store Croppin’ Bug Scrapbooking in La Marque. Because her schedule is flexible and her younger daughter has a heart concern, she decided homeschool was the best option, she said.

“I feel for the parents that can’t make the decision I could,” Brown said. “I’m very fortunate I’m self-employed.”

The article is terribly slanted. The statement "Parents with other options are choosing to keep their children out of the classroom for now," implies that, for parents with the means, the best choice is to keep students home. No mention is made of the recommendation by the American Academy of Pediatricians that students are better off in school.