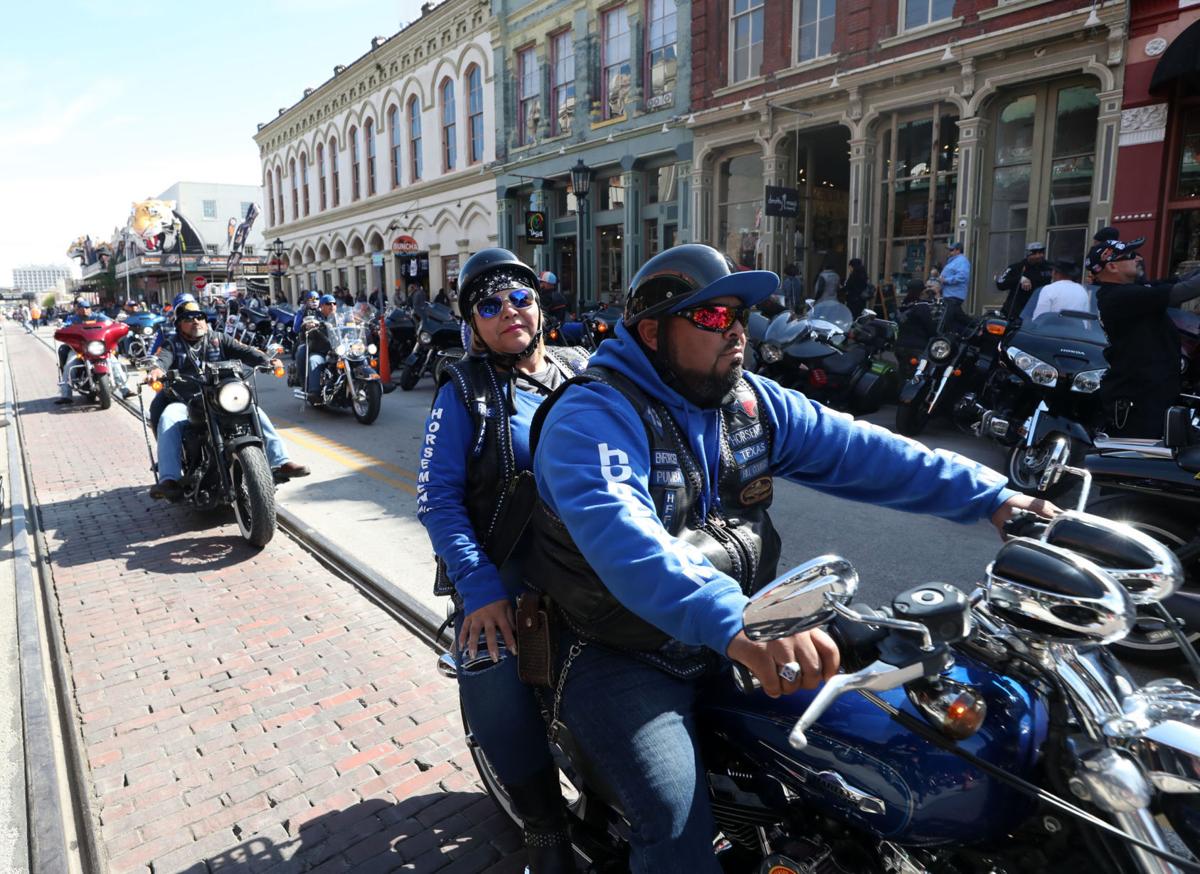 Members of the Horsemen Motorcycle Club ride through The Strand during the third day of Lone Star Rally in Galveston on Nov. 2, 2019. 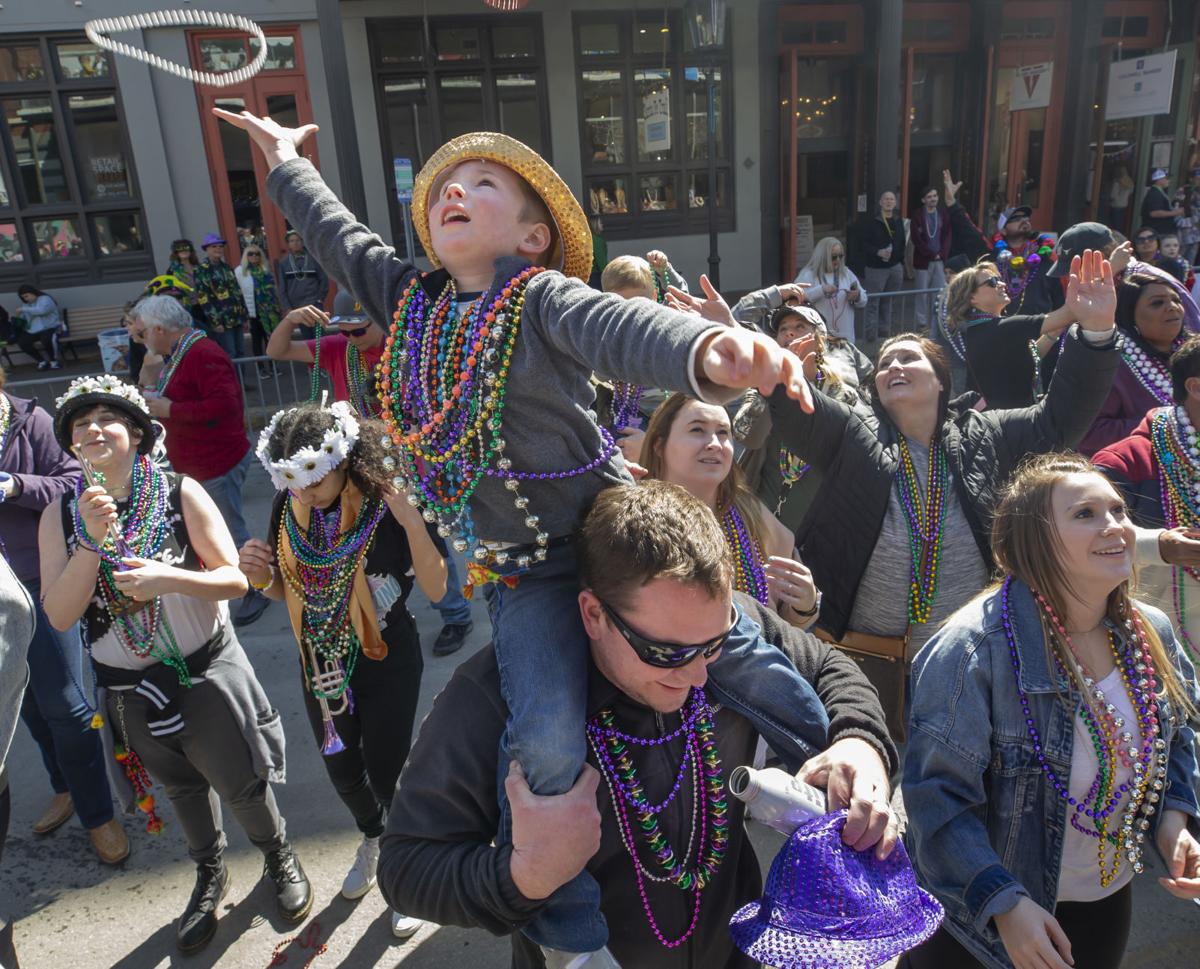 Cameron Bickerstaff, 5, stretches for a string of beads while sitting atop his father’s shoulders on the second Saturday of Mardi Gras Galveston festivities in downtown Galveston on Feb. 22.

Members of the Horsemen Motorcycle Club ride through The Strand during the third day of Lone Star Rally in Galveston on Nov. 2, 2019.

Cameron Bickerstaff, 5, stretches for a string of beads while sitting atop his father’s shoulders on the second Saturday of Mardi Gras Galveston festivities in downtown Galveston on Feb. 22.

City leaders and event organizers already are discussing how and when to host some of Galveston’s most popular summer and fall events in light of recommendations to continue social distancing to slow the spread of the coronavirus.

The events are vital to Galveston’s economy, bringing in hundreds of thousands of visitors and pumping money into the island’s tourism and hospitality industries, which were hit particularly hard by pandemic closures.

But while some argue the festivals can go on safely — and that they must for the survival of island businesses — others worry large events might fuel a resurgence of COVID-19.

“You plan for the best possible scenario,” Dean said.

Yaga’s will have to continue evaluating as the event time nears, Dean said.

“We are cautiously planning and moving forward with the hope we will be able to produce a safe event for all concerned,” Penland said.

Although the rally is moving forward, organizers are closely monitoring coronavirus in Galveston and the surrounding area, she said.

But planning has to start now if there’s going to be an event at all, she said.

“These take months and months to plan,” Penland said.

Some festival organizers already are giving themselves a deadline to decide.

The board of American Institute of Architects Houston, which hosts the long-running AIA Sandcastle Festival at East Beach, will meet this week to decide whether to host the festival, Executive Director Rusty Bienvenue said.

“We’ve gotten significant push from the city of Galveston to have the event,” Bienvenue said. “I’m not sure that’s responsible on our part.”

The sandcastle competition, which would be in its 34th year, typically draws between 20,000 and 25,000 people to the island.

Although it’d be feasible for event attendees to practice social distancing, it’d be harder for the participating teams, Bienvenue said.

Besides, employees of many of the architecture firms that normally participate are still working from home or have backed out of the competition, he said.

‘WE EITHER HAVE THEM OR WE DON’T’

The city in July will evaluate all requests on a case-by-case basis and at first only will consider events with less than 500 people, he said.

The city will follow recommendations from the Galveston County Health District and is concerned about people from out of town traveling to the city and interacting with locals, Smith said.

But one of Galveston’s biggest economic engines is tourism, Smith said.

“If it’s just left up to me, I probably wouldn’t have them,” Yarbrough said. “It’s not just my decision.”

There’s really no way to have large events at half capacity, he said.

“We either have them or we don’t,” Yarbrough said.

Yarbrough is concerned about increasing cases of COVID-19 in the county, he said.

There’s no debate events large festivals pump money into the city’s economy, attracting visitors who spend money in shops, restaurants and on lodging.

A study of the 2016 Lone Star Rally estimated the festival has an economic benefit of about $115.6 million for the city, between hotel bookings, restaurant tickets, retail shopping and other factors.

A similar study of the 2018 Mardi Gras estimates the event provides a $15 million annual benefit.

But controversy over special events in Galveston is perennial.

Some business owners have clashed for years about how and where festivals should be managed.

In late 2019 and early 2020, businessman Allen Flores brought a lawsuit against the city and Mardi Gras promoter Yaga’s Entertainment, asserting the city was wrongfully closing public streets and charging people to enter the roads and was misusing hotel occupancy tax monies for festival-related costs.

Judge Patricia Grady of the 212th District Court dismissed the case in January but an appeal still slowly winds its way through the system.

In response, more than 130 local business owners organized into a group called Experience Galveston, an advocacy group designed to provide a forum for Galveston businesses to voice opinions on events.

With so many businesses suffering from pandemic shutdowns, it’s important for Galveston to have festivals, said group representative Mary Jo Naschke.

“Everybody took a huge hit from having no business,” Naschke said.

Pandemic orders and measures that began in March and were meant to combat spread of COVID-19 forced many to shutter their doors and lay off workers.

“We need to embrace our visitors and say we are open for business,” Naschke said. “It’s just a good way to get back in business.”

Event organizers are going to establish a deadline to decide whether to host a festival this year, Keiser said.

And those organizers should also come up with ways to make events safer, such as having people wear masks or spreading people out more, he said.

The county is starting to see more cases, the results of residents and visitors starting to return to normal life three weeks ago, he said.

People are tired of being cooped up and many think it’s worth the risk of getting coronavirus, Keiser said.

Keiser has the authority to quarantine people, but he can’t cancel events, he said.

Event organizers want to host safe events, but now, more than ever, it’s important for festivals to go on, Dean said.

“The hotel industry and the hospitality industry are going to need those more than ever,” Dean said.

Events that are focused on parties in the streets bring unruly crowds. Lone Star Motorcycle Rally is unruly. Large drinking parties are falsely considered tourism by their organizers who destroy the city and leave.

1) The city is touting an expected 575,000 people descending on Galveston Island the first week of November for Lone Star Rally. We just had about 100,000 last weekend with shootings, roadway gridlock and trash left everywhere. Multiply that by five and let me know if you think it's wise to continue having mega-events like this. Galveston has outgrown the era of alcohol fueled street parties held in neighborhoods for half a million people but apparently City leaders haven't gotten that message yet.

2) "A study of the 2016 Lone Star Rally estimated the festival has an economic benefit of about $115.6 million for the city, between hotel bookings, restaurant tickets, retail shopping and other factors." If you read that study, as I did, you'll learn that two weeks after LSR rolled out, visitors to Galveston were at 60% of the rally numbers. That means Galveston on a normal weekend can be expected to generate more than half of what it does at events like LSR....but without a gang task force assigned, normal traffic patterns and normal trash pickup. What kind of value do we think we're getting with LSR?

3) "We’ve gotten significant push from the city of Galveston to have the event,” Bienvenue said. “I’m not sure that’s responsible on our part.” Did you get that? The same local government that went above and beyond both state and county restrictions and kneecapped hundreds of local businesses by forbidding them to serve a handful of patrons to stay solvent now is pushing to bring tens of thousands to the beach, a beach that just a few weeks ago was off-limits to all of us under penalty of steep fine.

City leadership has completely abdicated its responsibility to bring Galveston into the 21st century of tourism values while protecting local small and medium businesses. If you wanted to design a more convoluted, irrational and destructive public policy, you would be hard pressed to surpass this example.