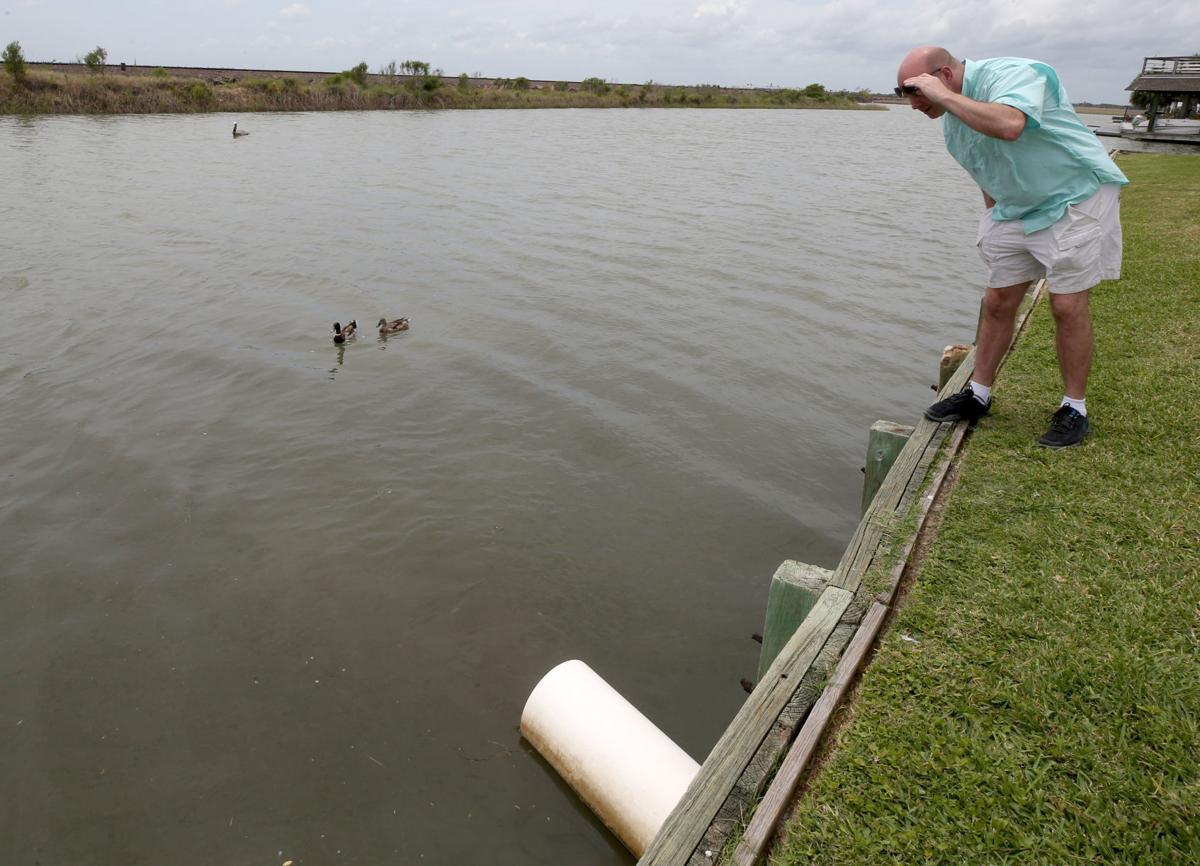 Eric Moeller, vice president of the Galveston County Municipal Utility District No. 12, watches the water discharged from the Bayou Vista Waste Water Treatment Plant on Tuesday, May 12, 2020. Some residents have voiced concern over the color and smell of the water being discharged into the canal. 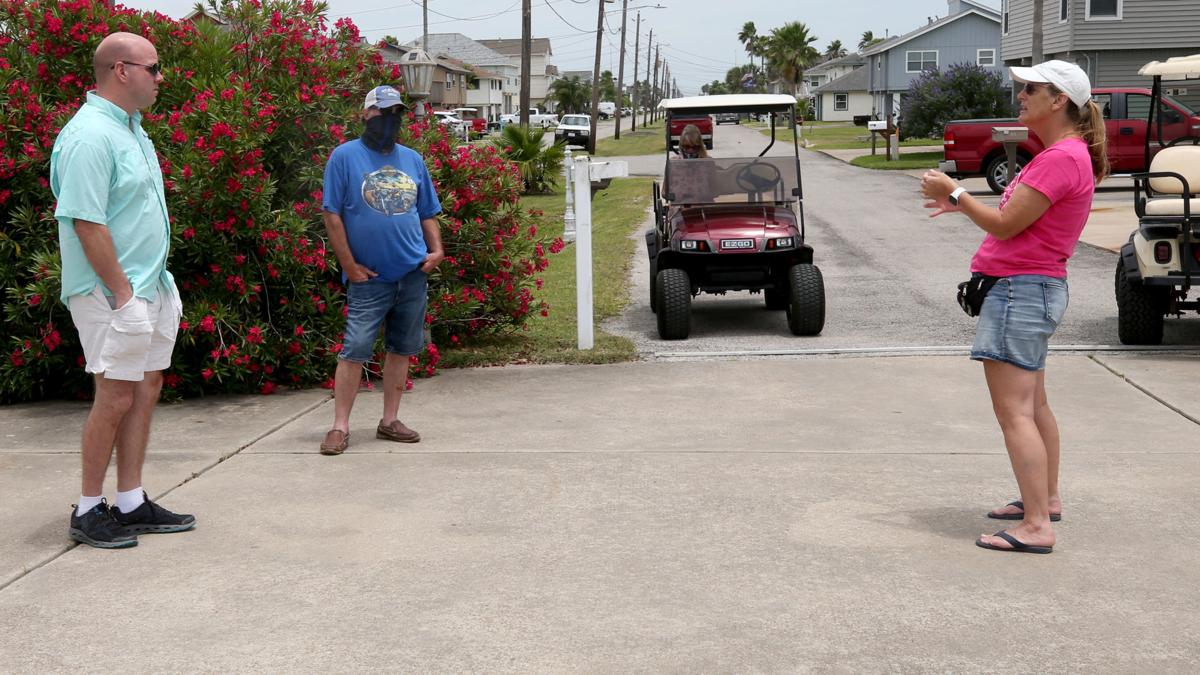 Bayou Vista resident Shelby Dill, right, voicers her concerns over the waste water treatment plant’s discharge into the canals to Eric Moeller, left, vice president of the Galveston County Municipal Utility District No. 12, and Roy Menotti, director of the utility district, on Tuesday, May 12, 2020.

Eric Moeller, vice president of the Galveston County Municipal Utility District No. 12, watches the water discharged from the Bayou Vista Waste Water Treatment Plant on Tuesday, May 12, 2020. Some residents have voiced concern over the color and smell of the water being discharged into the canal.

Bayou Vista resident Shelby Dill, right, voicers her concerns over the waste water treatment plant’s discharge into the canals to Eric Moeller, left, vice president of the Galveston County Municipal Utility District No. 12, and Roy Menotti, director of the utility district, on Tuesday, May 12, 2020.

The color of the water draining out of a pipe and into local canals in Bayou Vista — and its alleged odor — has some residents of the small canal community calling in state regulators and demanding answers from the people who run the local wastewater plant.

“I kayak here and I’ve come by here a couple times, and when I come by here it smells like feces,” said Shelby Dill, a Bayou Vista resident. “There’s chunks, and it’s gross.”

Dill said she wondered if the appearance of a family of ducks and a small school of fish around the white pipe sticking out the side of the canal at the end of Pompano Street was a sign that there was more than just dirt and water coming out of the system.

“If it was dirt, the birds wouldn’t be eating it,” Dill said.

Dill and other residents in Bayou Vista started noticing the brown water in April, she said, and videos of the discharge were posted on the local community Facebook page.

From there grew accusations that the leadership at Municipal Utility District No. 12 had failed and the local wastewater plant was polluting the canal with human waste.

A number of residents filed complaints with the Texas Commission on Environmental Quality, which regulates wastewater plants in Texas and investigates wastewater discharges.

On Monday, commission spokesman Brian McGovern said the agency had received complaints about discharges in Bayou Vista on April 12, 13 and 20. The commission has sent an investigator to Bayou Vista at least once. Officially, the discharges are still under investigation, the spokesman said.

District officials, however, say they’ve already been cleared by the commission and that what the residents are seeing and smelling isn’t untreated waste.

Rather, they claim that the discolored water coming from the pipe is the result of recent renovation work at the 30-year-old plant and from an increase in the number of people using the system because they’re staying home because of COVID-19 closures.

Richard Matthews, the president of Municipal Utility District 12, said the average daily gallons of water used in Bayou Vista had doubled in the last month, from 250,000 gallons a day to 500,000 gallons a day.

The added usage was putting more pressure on the plant’s aging pipes and knocking sediment in the system loose and out into the canal. The recent replacement of some filtering screens at the plant may also have contributed to some materials, but no human waste, being discharged

Michael Bacon, an attorney representing the utility district, said it was “an impossibility” that human waste was escaping out of the plant.

Some of the controversy also might be the result of lingering political differences. The renovations to the wastewater plant were the subject of two failed bond elections before finally being approved by voters in 2019.

Officials and residents said that there also have been changes on the district’s board, which potentially led to some hard feelings between neighbors in the tiny community.

Some of the people complaining about the discharge said they weren’t comfortable being identified.

When a Daily News reporter and photographer showed up on Pompano Street on Tuesday afternoon, they were greeted not only by Dill and other concerned residents but also by utility board members who had seen an announcement about the newspaper on the local Facebook page.

She said she wanted the utility district to find some way to acknowledge residents’ concerns and better communicate what was being done about them.

The utility district’s next public meeting is scheduled for Monday.

Officials from Municipal Utility District No. 12 had previously said discharges from the plant were clean and within legal limits.

If the Citizens are concerned then they should consider taking samples and have them independently tested.

It would seem like a reporter could tell us whether the odor was "alleged" or not.

There was no odor when I was there on Tuesday