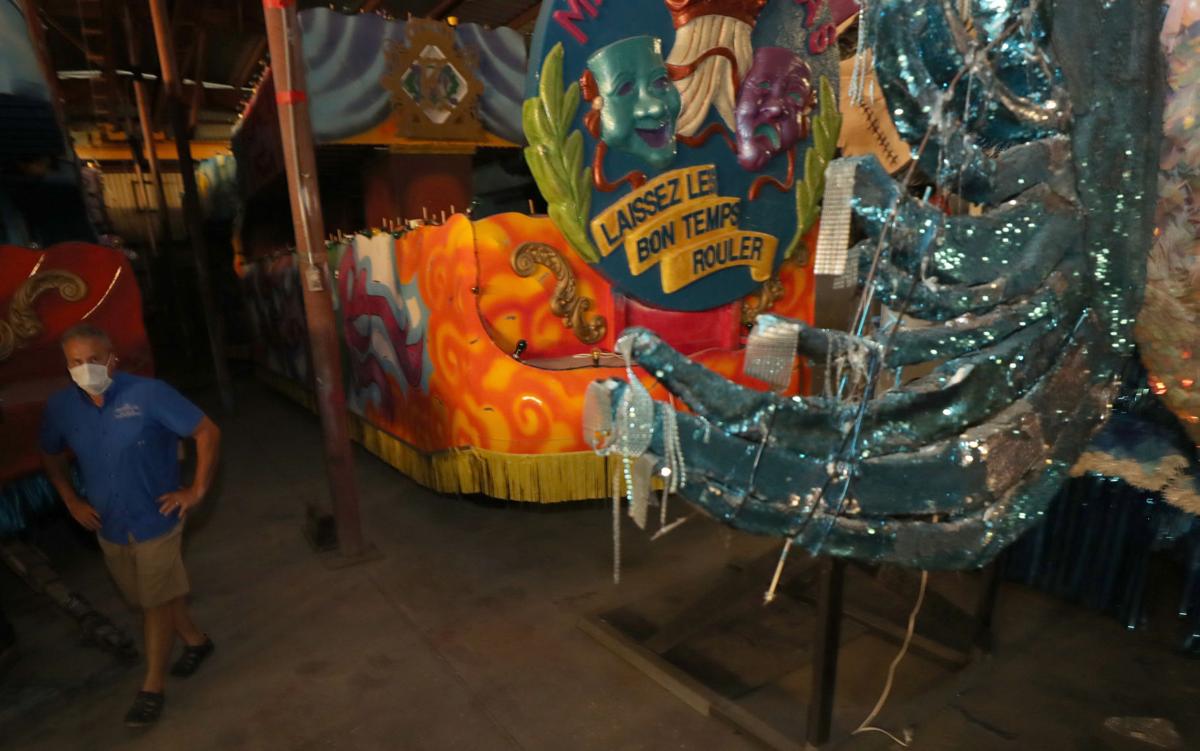 Robert Kirschner, with the Knights of Momus, walks through the barn where the krewe’s Mardi Gras floats are kept Tuesday, Sept. 15, 2020. 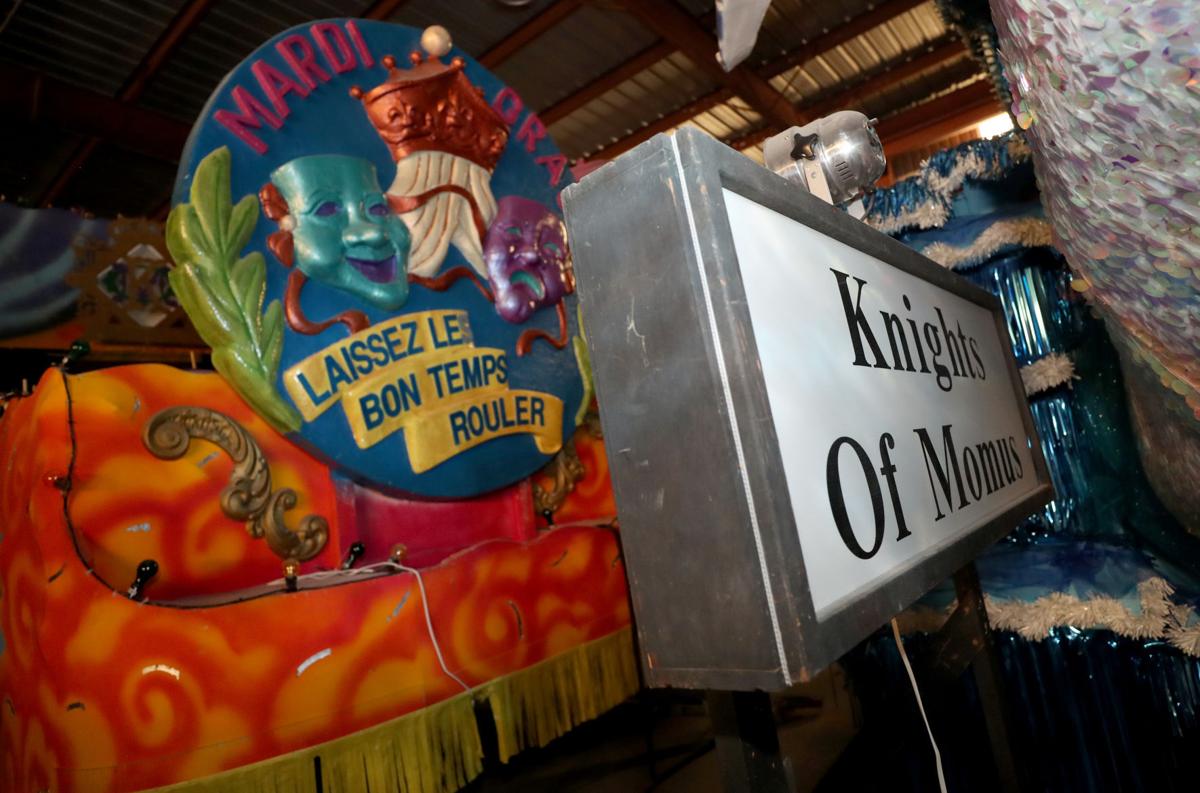 The Knights of Momus Mardi Gras floats are stored in a warehouse in Galveston on Tuesday, Sept. 15, 2020.

Robert Kirschner, with the Knights of Momus, walks through the barn where the krewe’s Mardi Gras floats are kept Tuesday, Sept. 15, 2020.

The Knights of Momus Mardi Gras floats are stored in a warehouse in Galveston on Tuesday, Sept. 15, 2020.

Although local and state leaders have been hesitant to promote the return of large festivals during a pandemic, many island residents are eager for the return of such events that are a tradition of the island’s fall and winter and help keep tourism going during the off-season.

But the city isn’t issuing special-event permits and likely won’t throughout October as administrators work to control the spread of the coronavirus by limiting large gatherings, City Manager Brian Maxwell said.

“As long as the governor has orders about public gatherings, we don’t think it’s right for the city to condone large activities,” Maxwell said.

Gov. Greg Abbott’s pandemic orders require local approval for outdoor gatherings of more than 10 people, while indoor venues are limited to 50 percent of their capacity, much like other businesses.

Those rules don’t forbid private events on private property or at the Galveston Island Convention Center.

Abbott has given mayors and county judges across the state discretion on issuing permits for large events.

In an Aug. 31 tweet, Abbott appeared poised to ease coronavirus restrictions in Texas, citing a decline in hospitalizations across the state, the Austin-American Statesman reported Sept. 2. In his tweet, Abbott reiterated a vow he wouldn’t order more lockdowns, despite demands by mayors and county judges to do so.

“Since my last orders in July, Covid numbers have declined — most importantly hospitalizations,” he tweeted “I hope to provide updates next week about next steps.”

A spokesman for Abbott couldn’t immediately be reached for comment Tuesday.

Some of Galveston’s signature festivals already have been canceled because of the pandemic.

Lone Star Rally, a festival that each year lures many thousands of motorcycle enthusiasts to the island, decided this summer to forgo the event until 2021. Galveston Island Oktoberfest also canceled its 2020 event and The Grand 1894 Opera House’s ARToberFEST moved online.

Galveston businesses rely on the hundreds of thousands of people who travel to the island for fall events to boost revenue during the off-season. Mardi Gras in the winter and Lone Star Rally in November typically attract the most visitors.

The city isn’t getting many inquiries from organizers seeking special-event permits, Smith said.

Special-event permits allow organizers to use the city streets or rights-of-way and block off streets.

If those kinds of events did carry on, they’d need strict social distancing rules that were enforced, Smith said.

“It would be very difficult to monitor that and make sure that the rules are adhered to,” Smith said.

Maxwell wants to see a sustained positivity rate of 5 percent for about three weeks before he’ll feel comfortable issuing special-event permits, he said.

The positivity rate refers to COVID-19 tests with positive results. In the latest reported rate from the Galveston County Health District, the county had a 5 percent positivity rate between Aug. 30 and Sept. 5.

“Most likely, we probably won’t allow it in October, but in November we’ll start looking at it,” Maxwell said.

The Galveston City Council will talk about festivals soon, but until Abbott changes his orders, it’s unlikely to make any shifts, Mayor pro tem Craig Brown said. Brown is acting as mayor.

“The main thing is to see how their plan is in sync with the governor’s orders that are in place,” Brown said.

Still, some festival organizers have decided to try to host events in Galveston, though differently.

The Galveston Island Shrimp Festival is still on for Oct. 17, but exactly how that will play out isn’t certain, promoter Mike Dean said.

Dean owns Yaga’s Entertainment, which has run Mardi Gras since 2011 and is in the bidding to host the festival for the next five years.

‘YOU HAVE TO BE NIMBLE’

“We have two plans: a worst-case scenario and a modified version of a public festival,” Dean said. “We’re just waiting to see and hear what the governor does.”

If the city isn’t issuing special-event permits, Dean might try to secure a private area for the festival, he said.

The Galveston Historical Foundation has yet to make the call on its popular Victorian holiday Dickens on The Strand festival but will by Oct. 1, Executive Director and CEO Dwayne Jones said.

Jones wouldn’t elaborate on what those options were, but he pointed out the foundation typically hosts smaller gatherings at its various historic sites in addition to the street events.

But much still remains uncertain about fall events.

The island’s Ironman 70.3 triathlon, scheduled for Nov. 22, still is planned to go forward as scheduled, according to a statement from the company. The Ironman organizers have not yet secured permits from the city, however.

Although there’s much uncertainty, what’s clear is islanders are ready for the return of festivals.

“It’s more packed on the seawall every weekend anyway,” Rowland said. “I miss all of our awesome outdoor events.”

“Bring all the festivals back immediately,” Braverman said.

People want a little return to normalcy with some version of events, Dean said.

And those events are such a big part of the island’s off-season business, he said.

“Festivals play a key part in the off-season in Galveston,” Dean said. “It would be helpful, I think, if we can extend the season just a little.”

But festivals aren’t likely to bring the same forceful economic drive to the fall that they have in years past, Smith said. Some people still aren’t comfortable getting out, and the restrictions and reduced capacity will pose challenges, he said.

“That unfortunately would reduce the revenue that they would bring in,” Smith said.