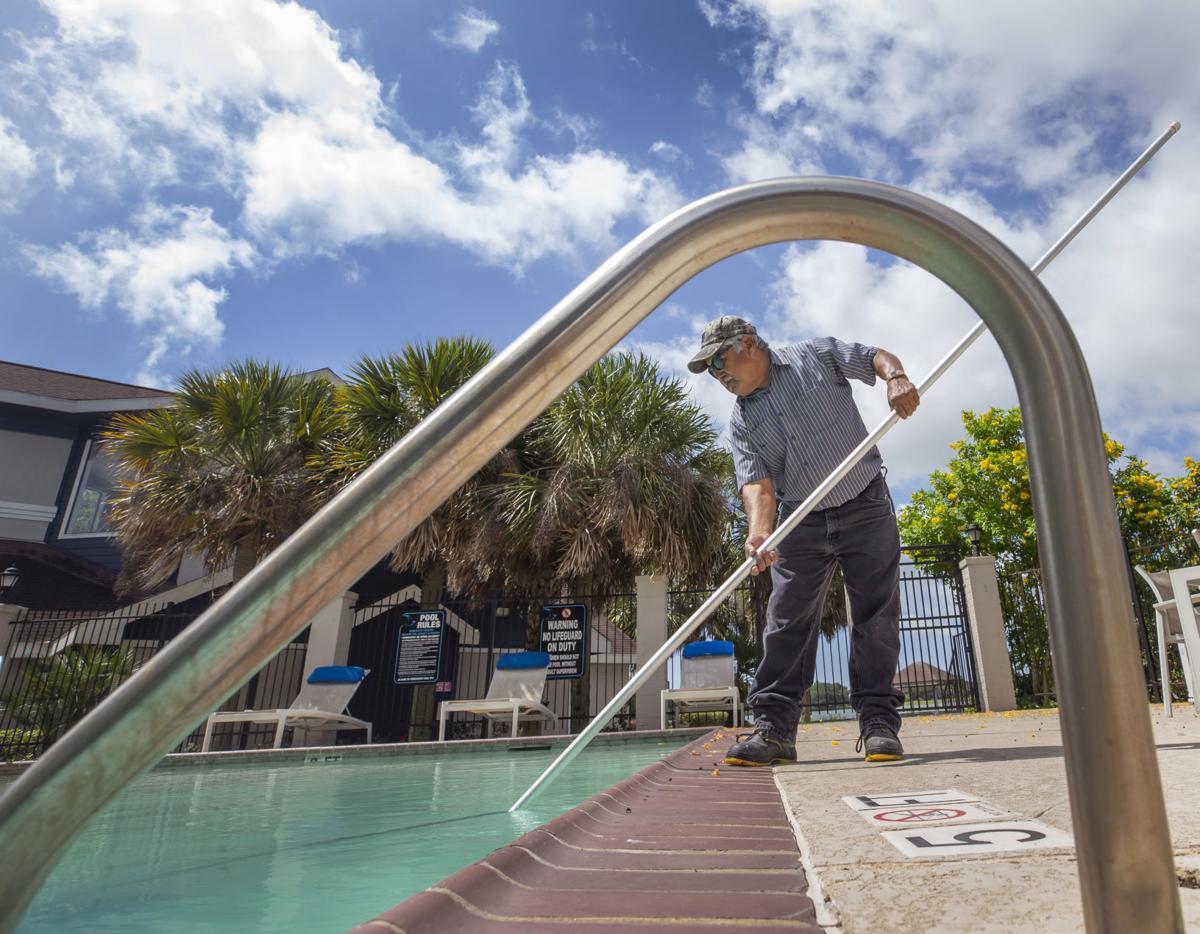 Maintenance worker Alberto Cervantes cleans the swimming pool at The Breakers Luxury Apartment Homes in Texas City on Tuesday, May 19, 2020. Valuation at the complex, 8801 Monticello Drive, rose this year to $14.6 million from $10.1 million a year ago, a 45 percent increase, according to Galveston Central Appraisal District data. 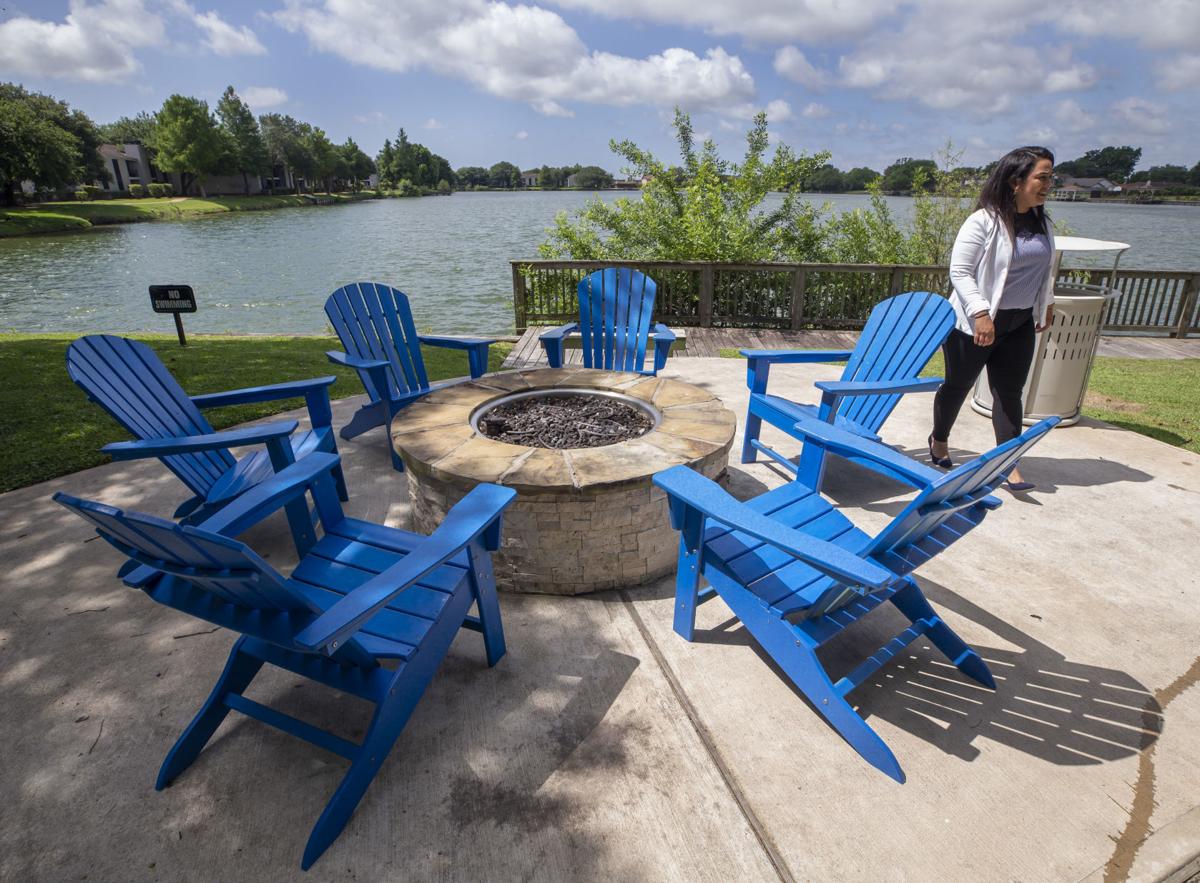 Glenda Galdamez, property manager at The Breakers Luxury Apartment Homes, walks past a fire pit area on the property in Texas City on Tuesday, May 19, 2020. 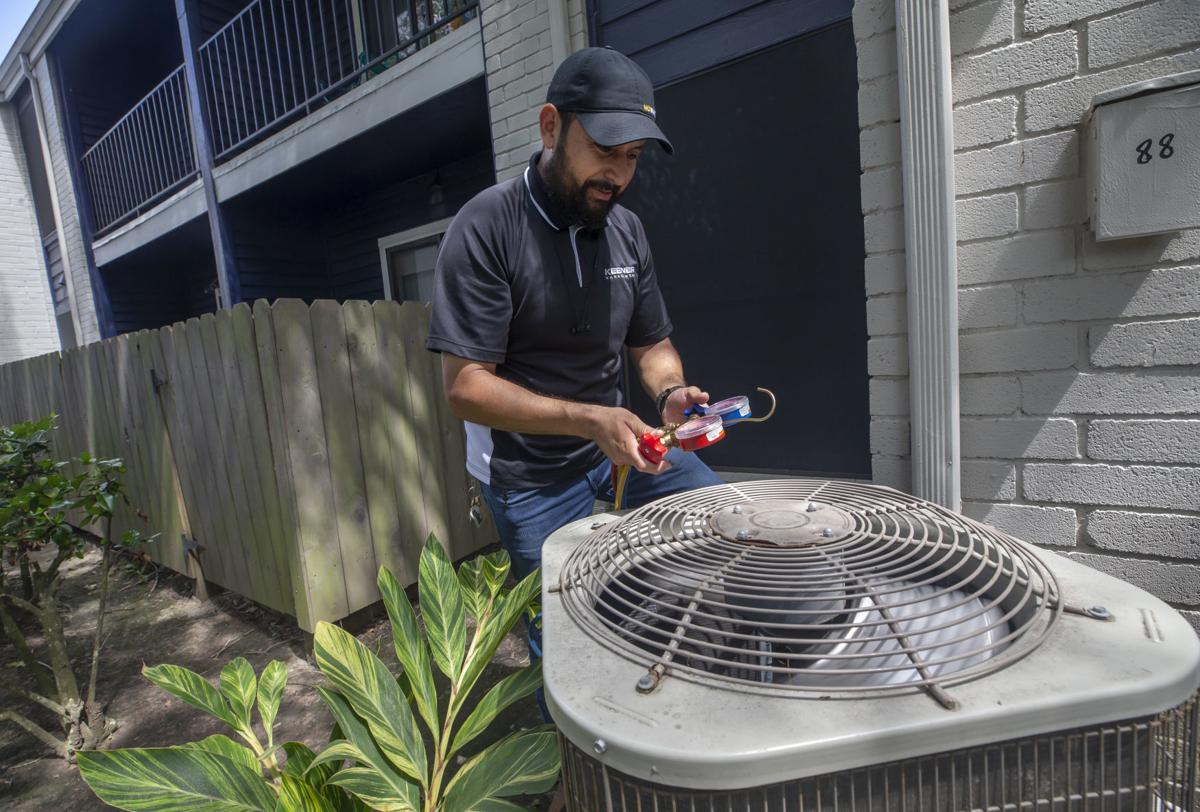 Maintenance worker Edgar Zamora checks the pressure on an air-conditioning unit at The Breakers Luxury Apartment Homes in Texas City on Tuesday, May 19, 2020. 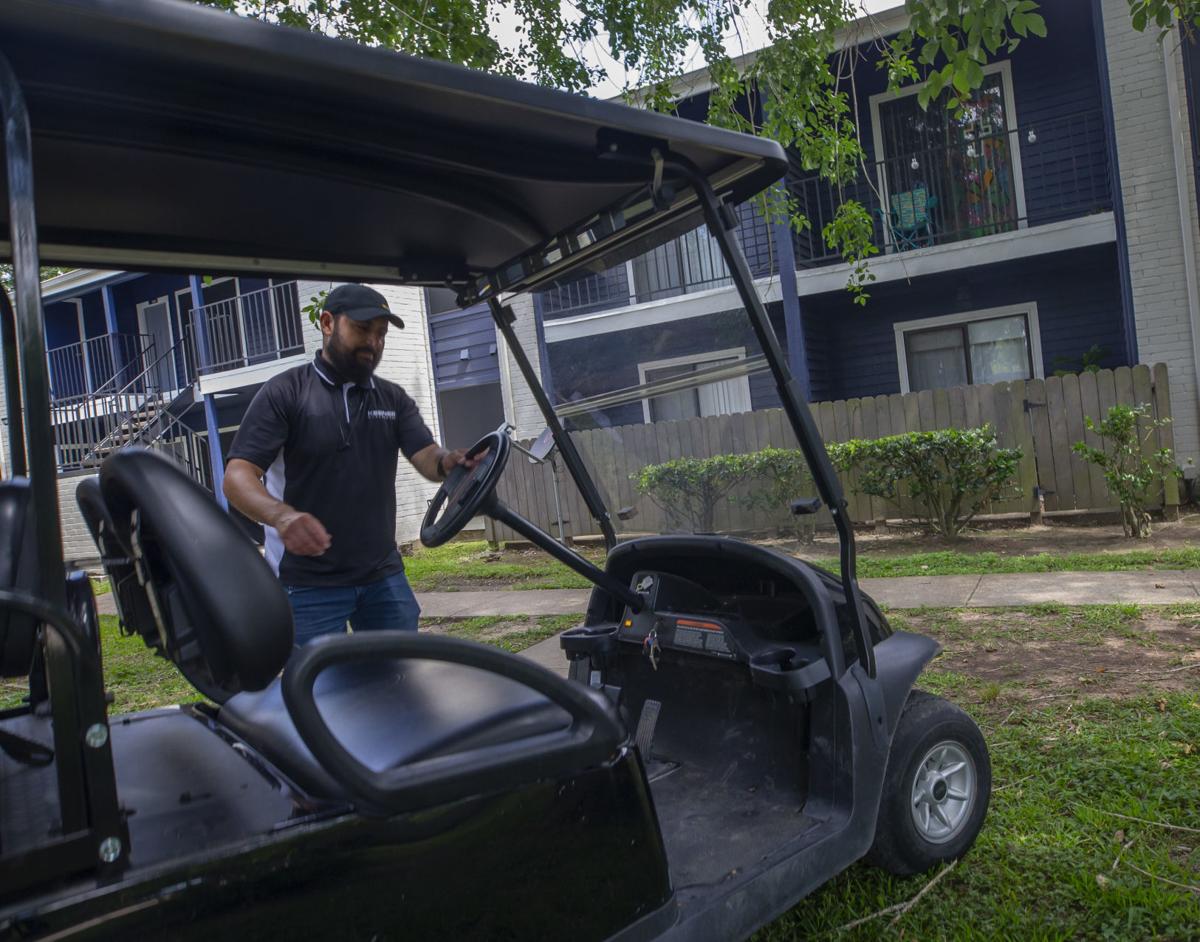 Maintenance worker Edgar Zamora climbs into his cart while making his rounds at The Breakers Luxury Apartment Homes in Texas City on Tuesday, May 19, 2020.

Maintenance worker Alberto Cervantes cleans the swimming pool at The Breakers Luxury Apartment Homes in Texas City on Tuesday, May 19, 2020. Valuation at the complex, 8801 Monticello Drive, rose this year to $14.6 million from $10.1 million a year ago, a 45 percent increase, according to Galveston Central Appraisal District data.

Glenda Galdamez, property manager at The Breakers Luxury Apartment Homes, walks past a fire pit area on the property in Texas City on Tuesday, May 19, 2020.

Maintenance worker Edgar Zamora checks the pressure on an air-conditioning unit at The Breakers Luxury Apartment Homes in Texas City on Tuesday, May 19, 2020.

Maintenance worker Edgar Zamora climbs into his cart while making his rounds at The Breakers Luxury Apartment Homes in Texas City on Tuesday, May 19, 2020.

Apartment owners, already struggling with tenants unable to pay their rents in the COVID-19 economy, say they’re also facing astounding increases in their property values, which will mean higher taxes.

It’s a double blow for many apartment complex owners in Galveston County who already are stretching their reserves thin, they said. Some worry increasing taxes combined with lost revenue will lead to foreclosures, they said.

For many multifamily complexes across the county, property valuations went up between 50 percent and 200 percent, according to a letter the Galveston County Apartment Association sent to the Galveston Central Appraisal District, an independent organization that determines the value of taxable property in the county.

“We believe these property value increases, during the worst economic crisis this country has seen since the Great Depression, is unconscionable and without merit,” according to the letter.

The letter, which the association sent last week, asked the appraisal district to reconsider its valuation.

Jerry Smith, managing director of Keener Investments, said the value of the company’s Galveston County properties skyrocketed. The company owns apartment complexes around the county and in Houston.

At The Breakers Luxury Apartment Homes, 8801 Monticello Drive in Texas City, valuation rose this year to $14.6 million from $10.1 million a year ago, a 45 percent increase, according to central appraisal district data.

Valuation of The Shore Apartments, 501 Davis Road in League City, rose to $12.5 million from $6 million, a 108 percent increase, according to data.

That means Smith’s escrow payments — the money he pays his lenders throughout the year to allocate to property taxes — will increase significantly, he said.

Smith has been lucky because many of his tenants have been able to pay rent, he said. In both April and May, he collected 10 percent less rent than in March, Smith said.

“If our economy doesn’t pop back into action by June, we are probably going to be in a rougher spot,” Smith said. “And on top of that, they’re doubling people’s property taxes.”

‘EVERYBODY NEEDS TO PROTEST’

The district appraised complexes too low in 2019 by about 15 percent to 20 percent, Faulkner said.

Last year, 15 apartment complexes sold in the county, and all of them sold for much more than the district had appraised them, Faulkner said.

“We had a couple apartments in League City that were significantly more than what we had them appraised at,” Faulkner said. “We didn’t have any choice but to rework our income model.”

Faulkner understands people are frustrated, especially with the pandemic, he said.

For some property owners, high property taxes are even more of a worry than tenants not being able to pay rent, they said.

Richard Denson, vice president of Galveston Bay Properties, has been waiving rent for some of his tenants who lost their jobs and he’s tightening up expenses in response, he said. The company owns and manages about 50 rental homes and small apartment complexes.

“We’re not as worried about the COVID stuff as we are about property taxes,” Denson said.

Apartment owners who don’t agree with their assessed value should protest just like any other property owner in the county, Galveston County Tax Assessor-Collector Cheryl Johnson said.

The values are extremely high this year, and normally most people don’t protest the values, she said.

“Everybody needs to protest this year,” Johnson said.

“”Everybody needs to protest this year,” Johnson said.” What an understatement!

The Galveston Central Appraisal District callously jacking up everyone’s property value in the midst of the worst economic crisis this country has seen since the Great Depression is inhuman.

Are they so cold blooded that they don’t notice or even give a damn about what’s currently happening to the people? Do the inhuman folks, probably still collecting their full paychecks, who run the appraisal district care more about how much money they can squeeze out of the victims of the government shutdown than the economic plight of fellow Texans? This very thing was one of the reasons that lead to the American Revolution - taxation that is unconscionable and without merit.

And it crosses the line into Texas being run by a bunch of monsters who stand idly by while the people are ravaged by the appraisal district. Texans ain’t fooled by this callous disregard for our economic plight and that of our friends and neighbors. Something can and should be done about it now!

Governor Abbott, LT. Governor Dan Patrick, the legislators in Austin and all the other leaders of Texas’ taxing entities all across Texas better rise up against this inhumanity and take action, or they need to be put out of their jobs to experience it first hand how it feels to be abandoned.

Ray, I appreciate the fact that you got all the way through your comment without blaming Democrats. I hope you read another story this morning, "GOP leaders pooh-pooh proposal to freeze property values".

Well for the record, Democrats are running cities and counties in Texas and are among those monsters in ‘Texas being run by a bunch of monsters.’ Out of control appraisals aren’t limited to Galveston County.

And I don’t need to read anything else. All leaders throughout Texas, Republican or Democrat, need to read what I wrote, and then freeze all property values now!

Texas Speaker of the House Dennis Bonnen says, "The reality of it is, I want the value of my real estate to go up, and it’s time we quit playing this game in Texas and acting as if the most significant asset in most people’s lives, your home, becoming more valuable is a bad thing."

But Texas Democrats are with you:

"Today, the undersigned members of the Texas Congressional Delegation ask you and the Texas State Legislature to suspend any raises, interest and penalties on Texas property taxes for the current taxable year. Additionally, the last thing our fellow Texans need is a change in property appraisals leading to an increase in property taxes"

It’s laughable that anyone anywhere in Texas or across America should ever think that any Democrat anywhere is with the people.

Democrats are for anybody but Texans and Americans, because that’s how they act.

Words mean nothing. It’s their acts that matter. And their record stinks like you know what!

And maybe, just maybe everyone who works at the Galveston County Appraisal District is a Democrat.

That's the Ray we know and love.

Would like to see 100% all go to the ARB. That would keep them busy for the next two years.

How many times have I asked taxpayers to question Mark Henry, Ken Clark and other Commissioners in regards to Property Taxes. Apparently he got "called out" in regards to his comment that "he cannot change the tax rates". Hmmmm.....

Ray, I hope you didn't hurt your self,doing that 180, when you realized what your first post said. [beam]