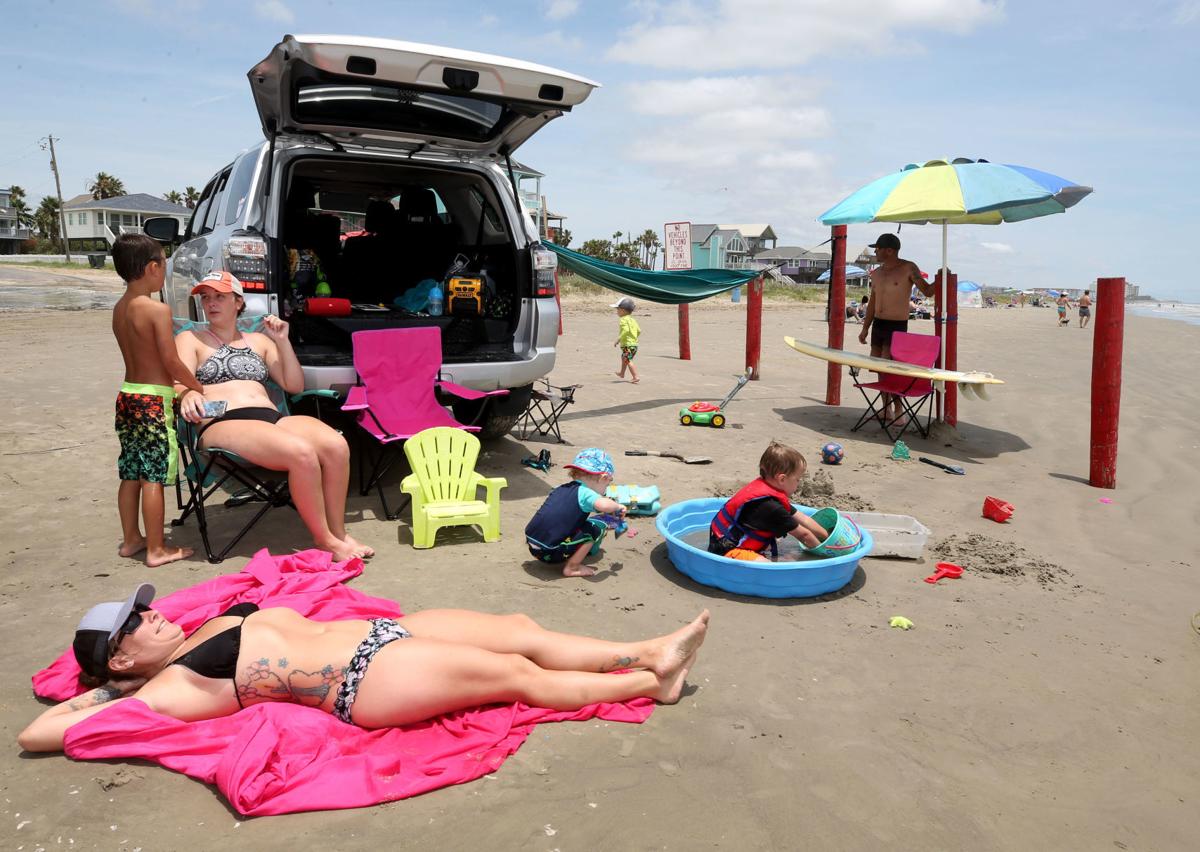 Jamie Schwaab, bottom left, lies in the sun as she spends Memorial Day at Sunny Beach in Galveston with her husband, Seth, right, their sons Jack and Dylan, and Eliece Waggoner and her sons Andrew and Paxton on Monday, May 25, 2020. 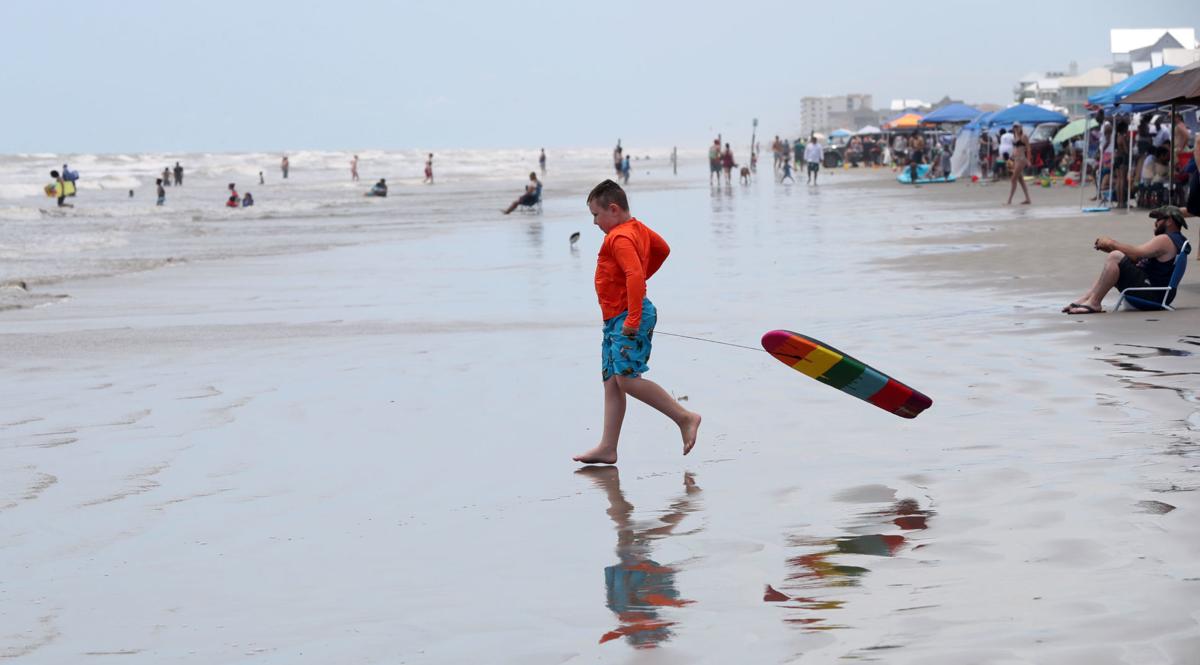 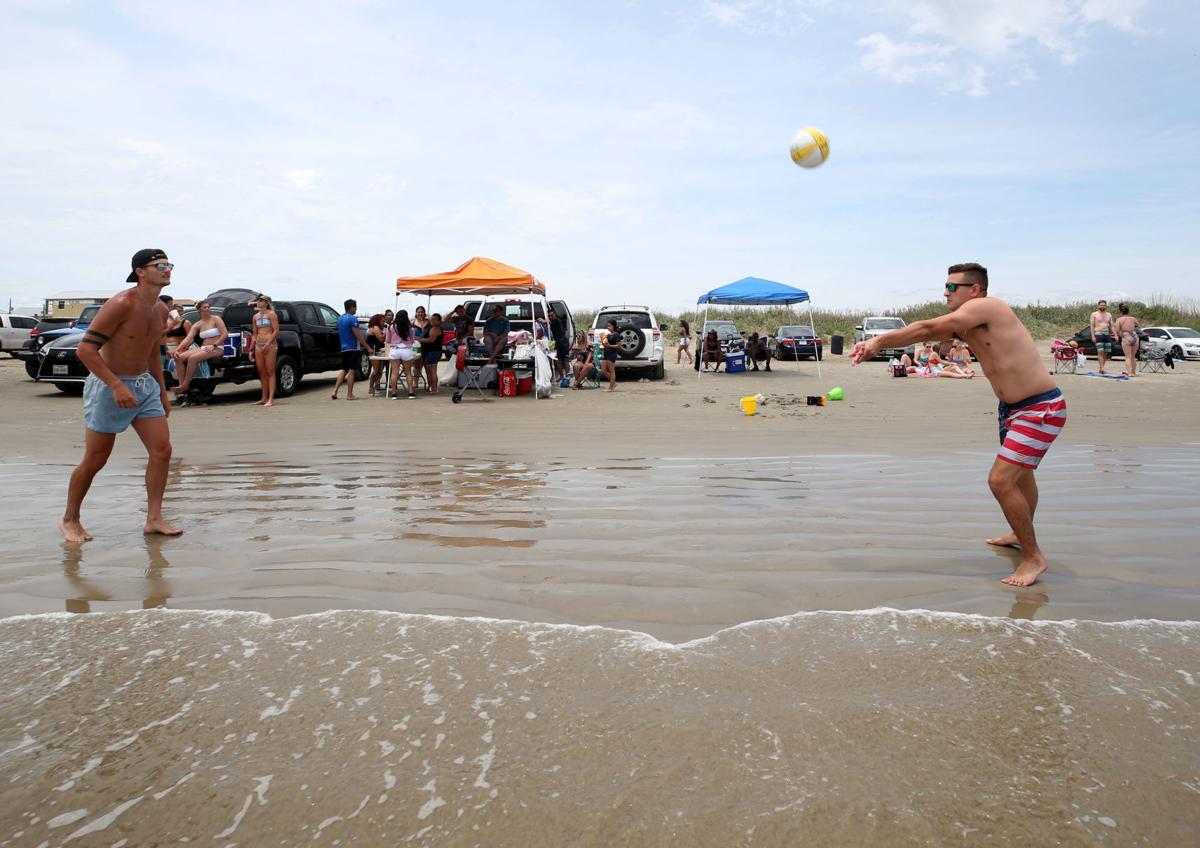 Aaron Terry, left, and Darius Garcia play volleyball at Sunny Beach in Galveston on Monday, May 25, 2020. They were spending the Memorial Day holiday on the beach with a group of college friends. 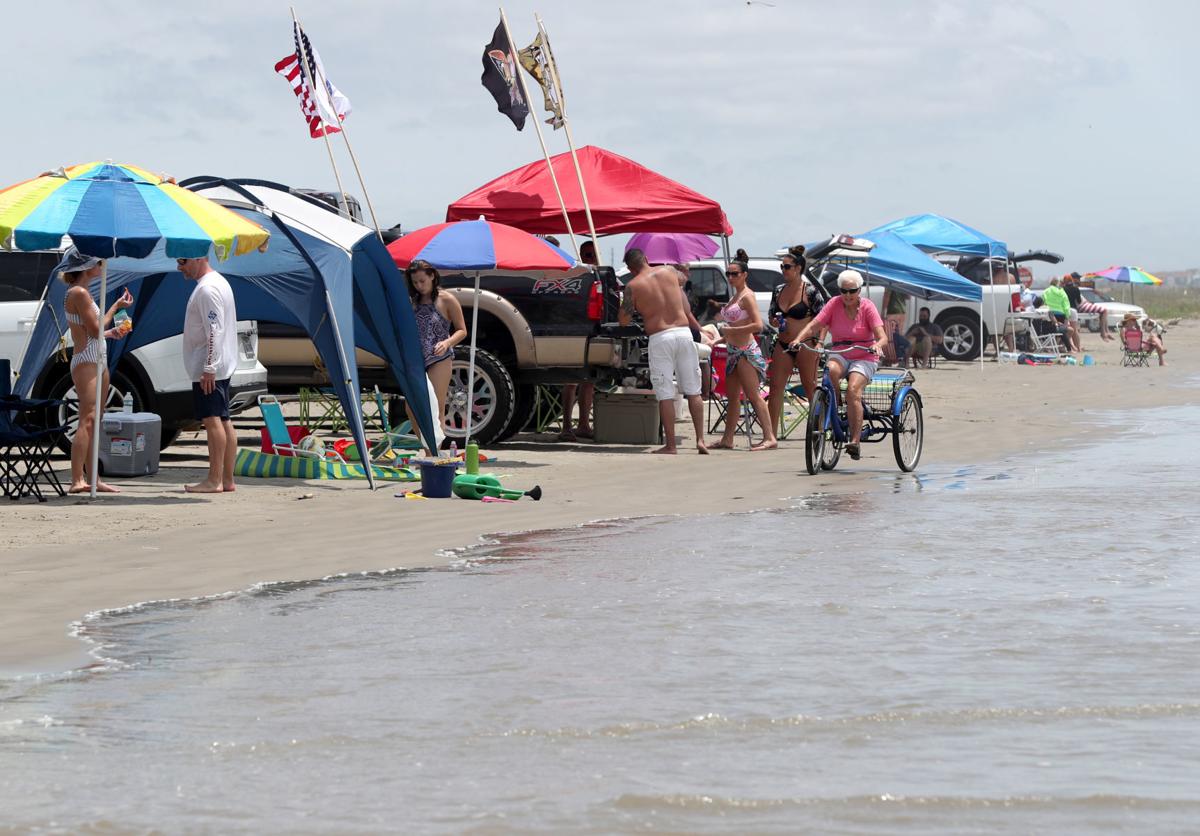 Sue McPherson rides her tricycle past the Memorial Day crowds in Jamaica Beach on Monday, May 25, 2020. 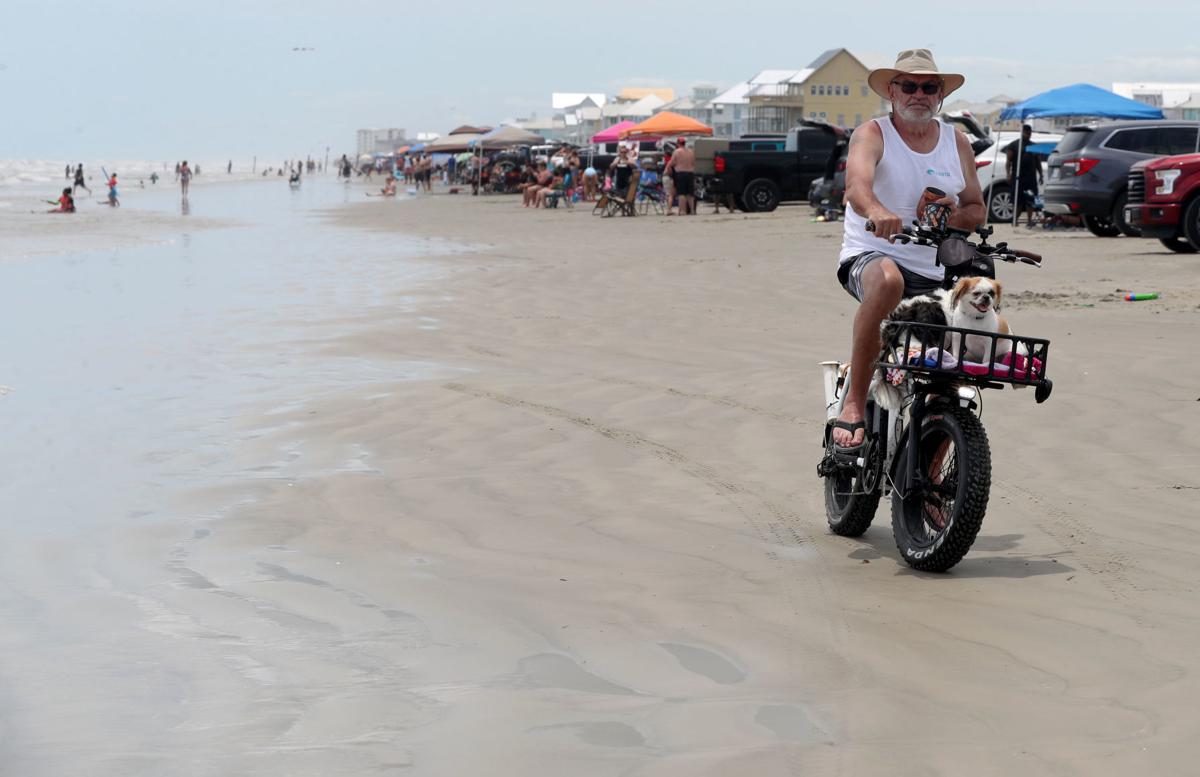 Kent Lehenbauer rides along Sunny Beach in Galveston with his dogs, Cooper and Carter, on Monday, May 25, 2020. 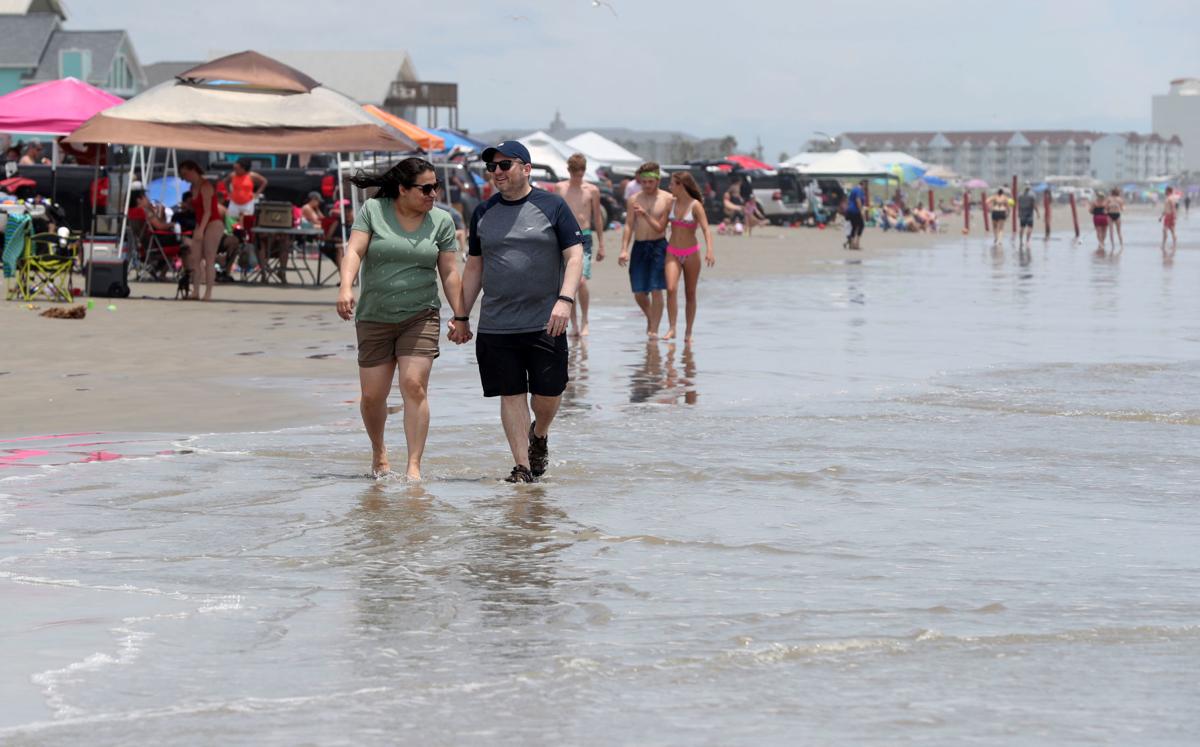 Simone and Jeremy Merritt walk along the beach at Sunny Beach in Galveston on Monday, May 25, 2020. 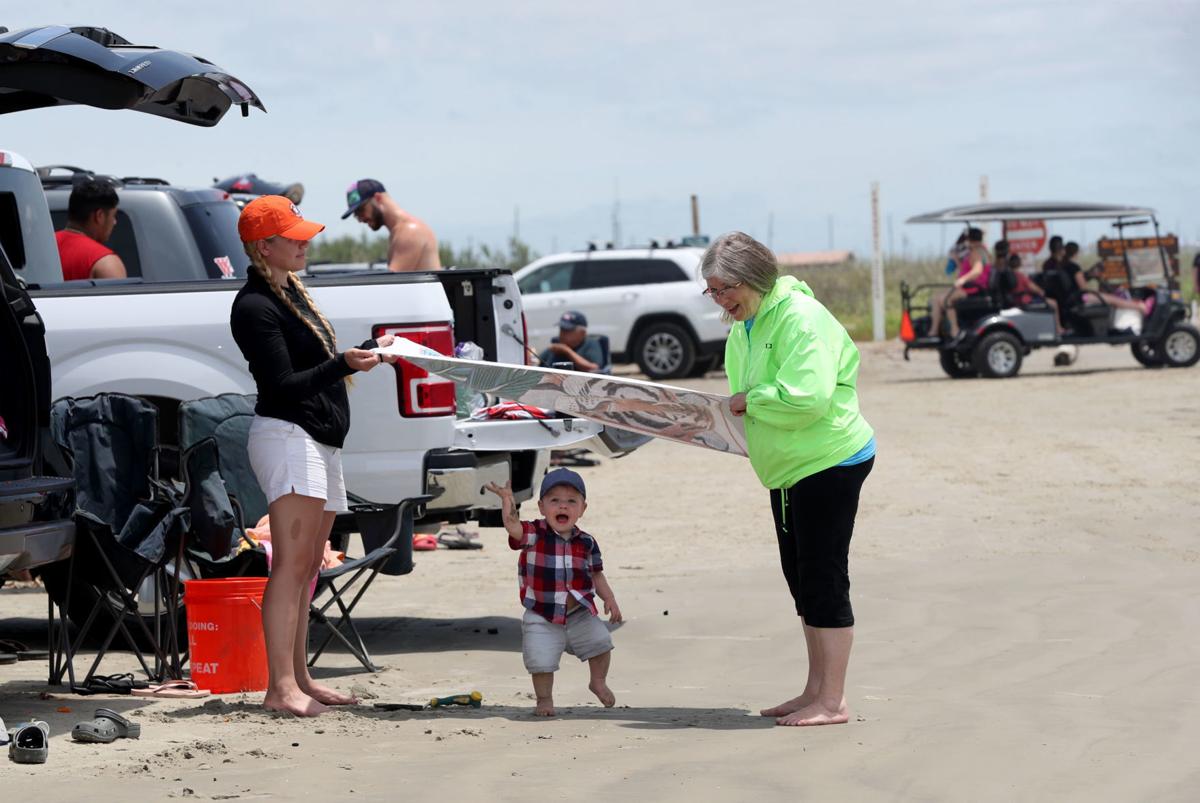 Joanne Rush, left, and her mother, Shirley Rayer shade Rush’s son, Jocco, as he plays on the beach in Jamaica Beach on Monday, May 25, 2020.

Jamie Schwaab, bottom left, lies in the sun as she spends Memorial Day at Sunny Beach in Galveston with her husband, Seth, right, their sons Jack and Dylan, and Eliece Waggoner and her sons Andrew and Paxton on Monday, May 25, 2020.

Aaron Terry, left, and Darius Garcia play volleyball at Sunny Beach in Galveston on Monday, May 25, 2020. They were spending the Memorial Day holiday on the beach with a group of college friends.

Sue McPherson rides her tricycle past the Memorial Day crowds in Jamaica Beach on Monday, May 25, 2020.

Kent Lehenbauer rides along Sunny Beach in Galveston with his dogs, Cooper and Carter, on Monday, May 25, 2020.

Simone and Jeremy Merritt walk along the beach at Sunny Beach in Galveston on Monday, May 25, 2020.

Joanne Rush, left, and her mother, Shirley Rayer shade Rush’s son, Jocco, as he plays on the beach in Jamaica Beach on Monday, May 25, 2020.

But beachgoers in Galveston on Monday afternoon weren’t seeing face masks and other signs of a global pandemic.

“We haven’t noticed anything different other than having to stand in line at the restaurant,” said David McGinnis, who drove to Galveston from Belton, about five hours away, on Friday. His family’s trip to Galveston this weekend was a small makeup for a canceled April trip to Mexico.

Galveston beaches were typically busy for Memorial Day as Texans from around the state headed to the coast for the start-of-summer holiday. While other parts of the country, including New York and New Jersey, opened their beaches with restrictions for the first time this weekend, Texas beaches have been fully opened since May 1.

Texas Gov. Greg Abbott has encouraged people to maintain separation from other groups of people in public spaces and to avoid traveling in large groups of non-family members. The U.S. Centers for Disease Control and Prevention has recommended people wear masks in public spaces, especially in places where social distancing is more difficult to maintain.

The most apparent sign of the pandemic flew overhead periodically throughout the weekend, as a white plane towed a banner with a message “6 feet saves lives.” Ice cream vendors driving the beach wore masks and gloves, and lifeguards sitting next to each other in towers along the seawall also covered their faces.

Traffic in Galveston seemed to peak Saturday as cars jammed Interstate 45 waiting to turn on to 61st Street and even parked along FM 3005 on West End as parking at beach access points reached their limits.

The traffic on Monday was lighter, but lines of cars and trucks still filled most of the island’s more popular beaches.

Fort Worth resident Brittney Betten traveled to Galveston on Sunday after weeks of feeling “cooped up” in the North Texas city.

Compared to Galveston, “there’s a lot more mask wearing” in Fort Worth, Betten said, noting the only place she saw anyone wearing masks over the weekend was in a Seawall Boulevard nightclub.

Betten wasn’t overly worried about what she saw in Galveston.

“I know it’s a real thing and I know it’s serious,” Betten said. “But I think you just have to take precautions and stuff and be clean.”

Friday marked not only the official beginning of summer but also the start of a new phase of reopening parts of Texas. Bars around Texas were allowed to open at 25 percent capacity, while restaurant dining rooms were allowed to be at half capacity.

Galveston officials have encouraged people to police themselves at restaurants and other businesses and to avoid places that don’t appear to be following the state’s guideline. City spokeswoman Marissa Barnett on Monday said she couldn’t confirm whether city marshals or the police department received any reports or complaints about overcrowded businesses.

The number of people on beaches didn’t draw any public outcry from local officials. But they did draw attention from elsewhere.

Houston Mayor Sylvester Turner on Sunday evening urged Houston residents who had visited beaches — as well as crowded nightclubs and parties that drew outrage on social media — to get tested for COVID-19.

“Come Tuesday, they ought to be the first in line to get tested,” Turner said. “If you were at these parties, if you were on the beaches, if you were around a whole lot of folks and not engaging in social distancing and you didn’t have on a mask and you were in close proximity to other people, I would encourage you to go to one of the 27 free testing sites in the city of Houston.”

Part of Turner’s concern was a report published last week by the PolicyLab at Children’s Hospital of Philadelphia, which warned of a possible large increase in the number of cases in Harris County that could be attributable to reopening.

The Philadelphia model predicted Harris County could see as many as 2,000 new cases a day by the middle of June.

The same model gives a less dire prediction for Galveston County and estimated an increase to 11 new cases per day by June.

Between May 19 and Monday, the Galveston County Health District has announced an average of seven new COVID-19 diagnoses per day. There were 753 diagnosed cases of COVID-19 in Galveston County as of Monday, according to the health district.

Here's the latest from the CDC on the current best estimate of the fatality rate of Covid-19: among all age groups. 0.004 percent of the population.

That is a rate comparable to a bad flu season, and not the worst that we have experienced in recent memory. 62 percent of all Covid-19 deaths were in the six states where governors insisted on sending Covid-19 positive patients back to nursing homes, even though these six states only compose 18 percent of the national population. As we've seen in Galveston County, the vast majority of fatalities were at just one seniors facility. Back out these numbers and you see a fatality rate LESS than an average flu season.

It has been noted (by those who wish to see things as they are rather than as they've been hypnotized into believing) that in many countries, the median age at death of Covid-19 victims is HIGHER than the average life expectancy for that country. That's right: you stand a better chance of longer life with the virus than with many of the chronic ailments that affect modern human societies.

For this, the economy worldwide has been decimated, nearly 40,000,000 Americans were thrown out of work, there is no doubt the level of damage will be greater than we sustained during the Great Depression...and the people who called the shots on this debacle are all happily employed in various levels of government, academia and mass media, where the idiocy of this policy has been championed non-stop for months.

Anyone doing independent research on this topic could see months ago the initial projections were off by orders of magnitude.That didn't stop the drumbeat of fear that was hammered into us every day of this national nightmare.

Who is going to take responsibility for this on a national, state and local level? Who is going to compensate the uncounted millions who went from a normal lifestyle to living in the back seat of their car? How will government undo the incredible damage it has done to our civil liberties as our houses of worship were closed, small businesses discriminated against as non-essential, and our very person made the object of isolation at the risk of fines or imprisonment?

These decisions were made by individuals and those individuals should be made to answer to the American public for what they have wrought.