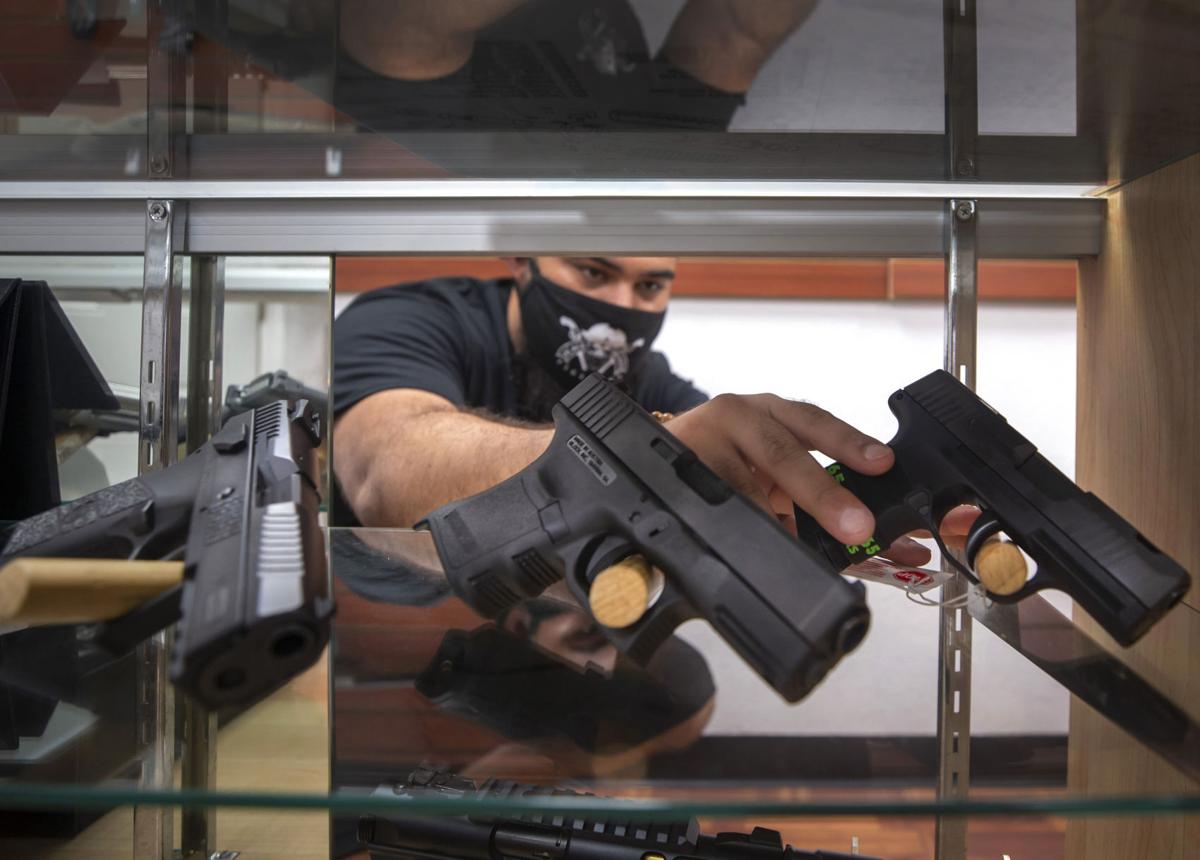 Trevor Perren, owner of Blackbeard Firearms in Dickinson, places a Sig Sauer pistol back in a display case at his shop in Dickinson on Thursday, Aug. 13, 2020. Perren said he’s seen an increase in demand and sales for ammunition and firearms, particularly handguns. 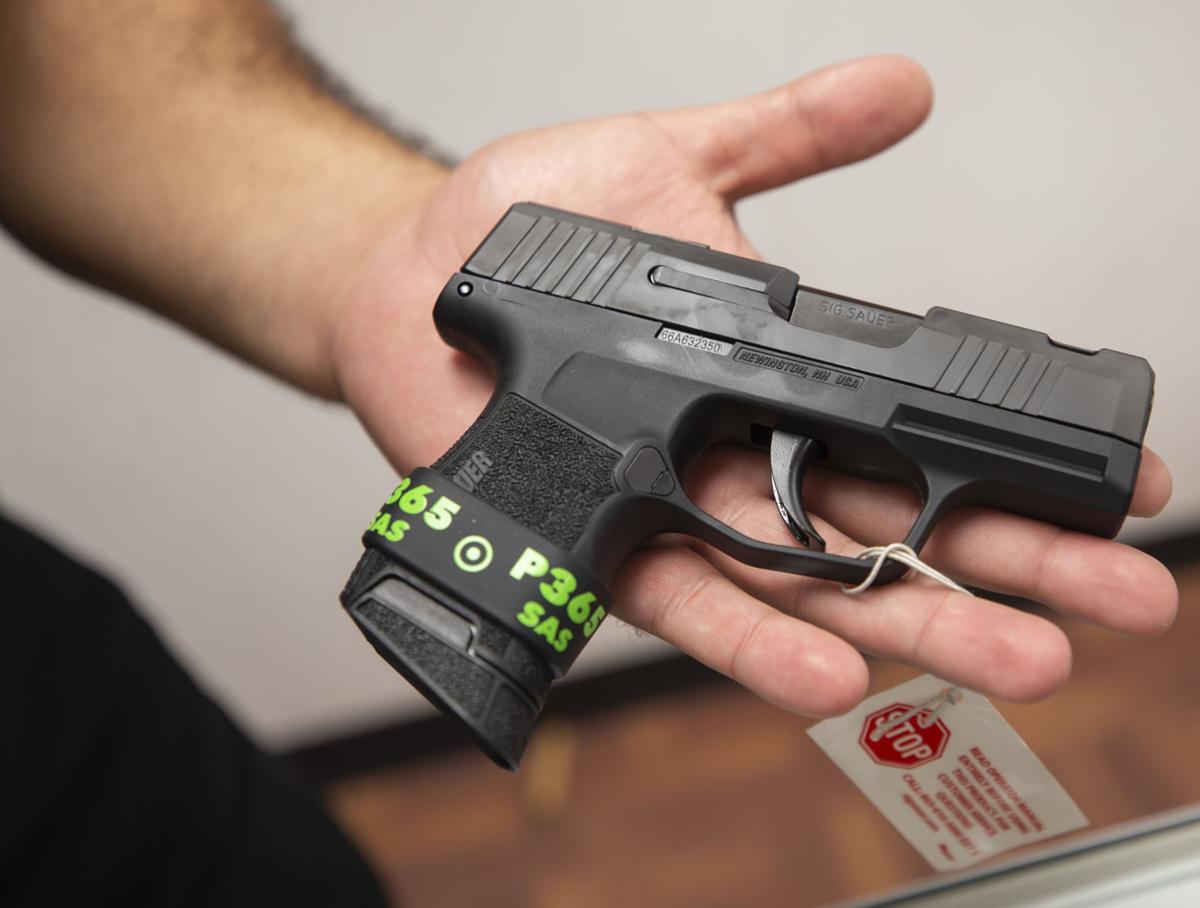 Trevor Perren, owner of Blackbeard Firearms in Dickinson, holds a Sig Sauer pistol at his shop in Dickinson on Thursday, Aug. 13, 2020. Perren said he’s seen an increase in demand and sales for ammunition and firearms, particularly handguns. 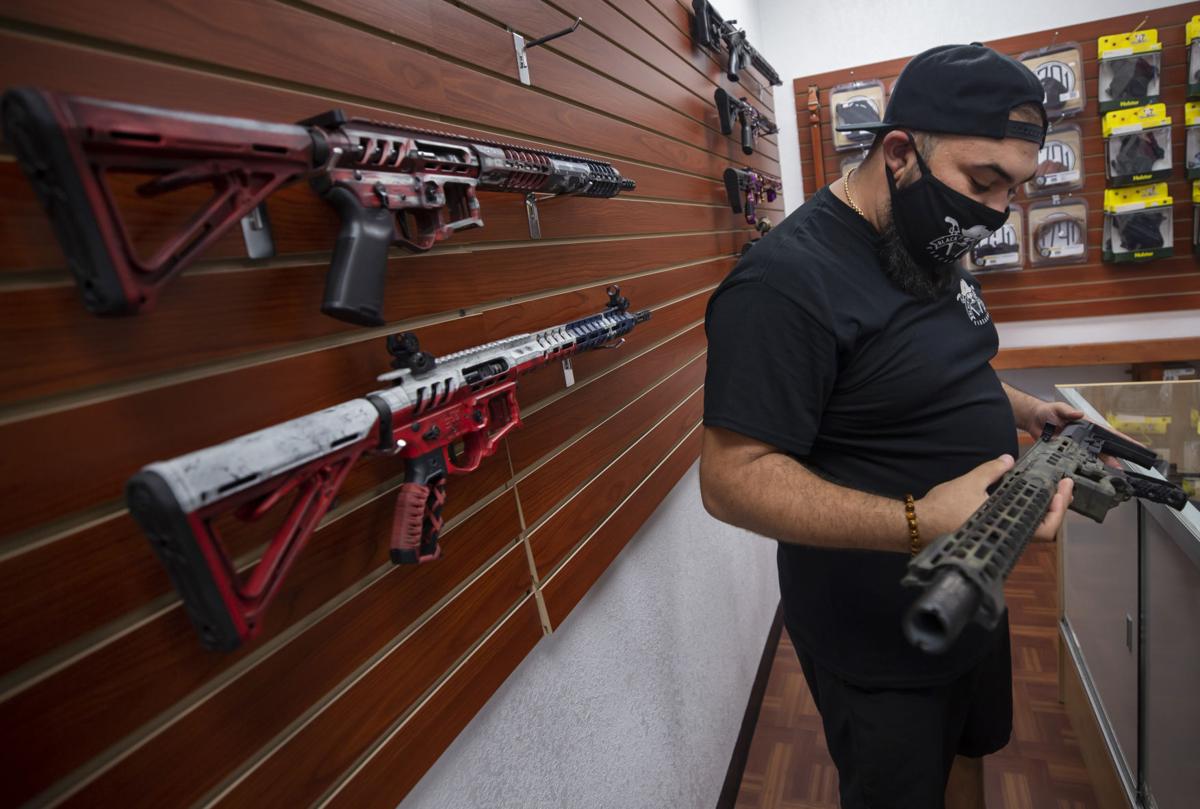 Trevor Perren, owner of Blackbeard Firearms in Dickinson, pulls a rifle from the shelf at his business on Thursday, Aug. 13, 2020. 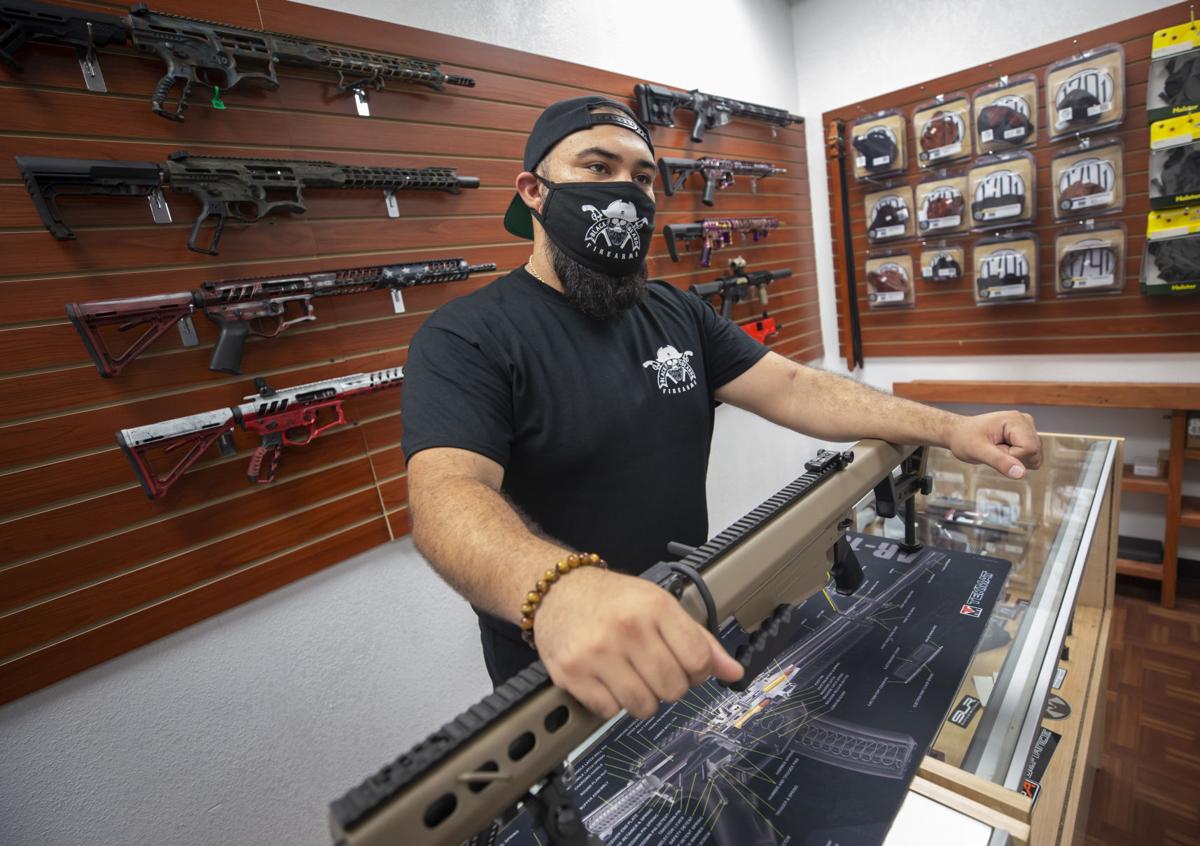 Trevor Perren, owner of Blackbeard Firearms in Dickinson, speaks Thursday, Aug. 13, 2020, about sales at his business. 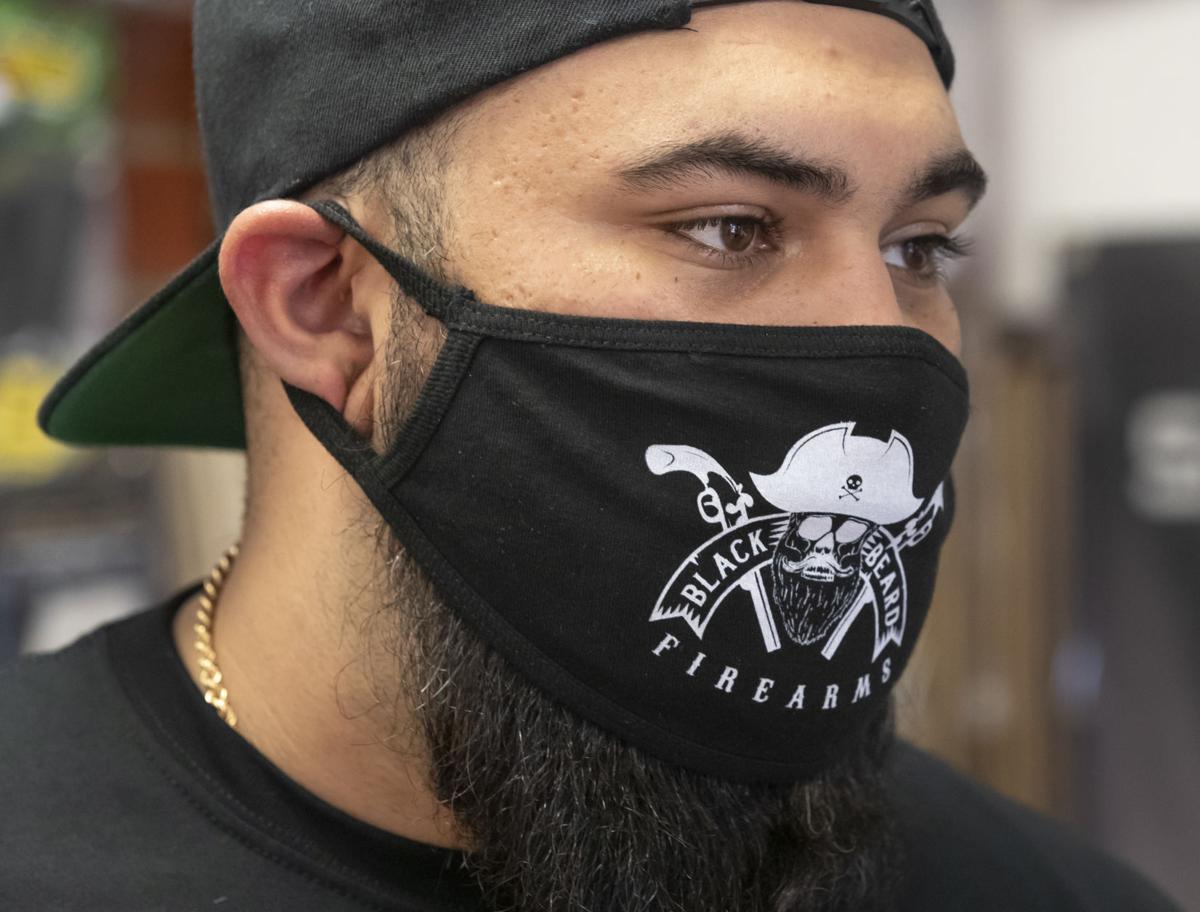 Trevor Perren, owner of Blackbeard Firearms in Dickinson, says he’s seen an increase in demand and sales for ammunition and firearms, particularly handguns.

Trevor Perren, owner of Blackbeard Firearms in Dickinson, places a Sig Sauer pistol back in a display case at his shop in Dickinson on Thursday, Aug. 13, 2020. Perren said he’s seen an increase in demand and sales for ammunition and firearms, particularly handguns.

Trevor Perren, owner of Blackbeard Firearms in Dickinson, holds a Sig Sauer pistol at his shop in Dickinson on Thursday, Aug. 13, 2020. Perren said he’s seen an increase in demand and sales for ammunition and firearms, particularly handguns.

Trevor Perren, owner of Blackbeard Firearms in Dickinson, pulls a rifle from the shelf at his business on Thursday, Aug. 13, 2020.

Trevor Perren, owner of Blackbeard Firearms in Dickinson, speaks Thursday, Aug. 13, 2020, about sales at his business.

Trevor Perren, owner of Blackbeard Firearms in Dickinson, says he’s seen an increase in demand and sales for ammunition and firearms, particularly handguns.

Some even took to social media to ask fellow residents which stores had it in stock.

The ammunition shortage is just the tip of the iceberg in a massive national uptick of firearm sales that began shortly after the coronavirus pandemic shuttered businesses and forced people to stay home starting in March, according to gun store staff.

“It goes all the way back to the manufacturer,” said Wesley Burns, a manager at Texas City’s The Shooters Corner, 2835 Palmer Highway. “They’re just running low on certain components that go into the manufacturing of ammunition. Currently, with the high demand, there’s just been a big strain on the supply chain.”

As restaurants shift more business to takeout orders and other companies innovate to make up for lost profits because of the coronavirus pandemic, gun store owners in Galveston County and across the nation are seeing record-setting profits.

A multitude of factors — from civil unrest, to fear that the upcoming national election might mean tighter gun-control laws, to general uncertainty caused by the COVID-19 pandemic — have led to a huge upsurge in first-time gun buyers and longtime aficionados searching out firearms.

Blackbeard Firearms, open for a little more than a year at 1314 FM 646 in Dickinson, has seen its sales increase by about 60 percent since the pandemic began, owner Trevor Perren said.

Smaller handguns, such as the Sig Sauer P365, and rifles have been among the most popular, Perren said.

Just about every month since the pandemic began has set sales records at The Shooters Corner, Burns said.

Nationally, the FBI conducted more than 3.6 million firearms background checks in July, compared with just 2.3 million the same month a year ago, according to data provided by National Instant Criminal Background Check System.

That was the third-highest month since record-keeping began in 1998.

“It’s different types of customers,” Perren said. “You’ve got some returning customers that just want to make sure they have the most current items, and then you’ve also got brand-new customers that have decided they want to be able to protect themselves.”

Although background checks aren’t directly synonymous with gun purchases, they do give a fairly good indication of sales, said Phillip Levine, a professor of economics at Wellesley College in Massachusetts, who has conducted research into conditions that lead to an uptick in firearm sales.

Between the uncertainty spurred by the coronavirus pandemic, the protests over racial injustice and the upcoming presidential election, gun store owners have an essentially perfect storm for record gun sales, Levine said.

“Guns provide security for people,” he said. “When people feel uncertain about events, they like to buy guns. And there’s a lot of that going on right now.”

Protests have sprung up across the country after the death of George Floyd, who died in Minneapolis while handcuffed and restrained by four police officers, including one who pushed his knee into the back of Floyd’s neck for more than eight minutes. Floyd’s death in Minneapolis police custody has sparked global protests against police killings. A Black man, Floyd pleaded for air while offering little resistance to his arrest May 25.

And former Vice President Joe Biden will face off against President Donald Trump in November in an election that has spurred increased political polarization and vitriol.

Because the pandemic shows no signs of ending anytime soon and the election still is several months away, those record-breaking gun sale numbers could continue at least for the rest of the year, Levine said. That could especially be true if Biden were to win the election.

“Fear of gun-control legislation is a strong motivation for gun purchases,” he said.

Historically, major events such as the Y2K scare and some of the school shootings have led to upticks in gun sales, Levine said.

The notion of Y2K — propagated mostly by people selling everything from expert opinion to survival food — was that because of a design flaw in computers, modern civilization would end when computer clocks passed 11:59:59 p.m. Dec. 31, 1999, and found they had no place to go except back to 1900. Flood gates would open. Banks would fail. Airplanes would fall from the sky and food would evaporate from store shelves.

Levine predicts gun sales could exceed the yearly record by the end of September, he said.

Last year saw the highest number of background checks, with some 28 million, Levine said. This year the country might see as many as 40 million.

Police protection has always been part of what we paid taxes for. With Democrats cutting funding for police or saying they will citizens living in Democrat controlled Cities have a real reason to depend on personal protection. If Biden were to win the fear will increase and black market sales could be the major way to buy guns. Already the black market, legally owned and sold weapons are exceding gun store sales because guns bought with background checks are identifiable if gun confiscation should be passed by Democrats. Seems to me a better idea would be to not vote for any Democrat running for any office.

Charles> First time I said it before you could.

A Biden win is a win for the gun industry. With no boogeyman in the White House, fear based gun sales have really been sagging.

With the threat of gun confiscation.

Bailey> If there is any sag in gun sales it is because gun retailers are running out of stock. Citizen to citizen sales (AKA black market) are making up the difference. The Government estimates of US gun owners may be only half the real numbers. Many gun owners own guns that have never been registered and can't be counted. Unregistered guns draw premium prices because government doesn't know where they are. The real shortage is ammo and hand loaders are working overtime to supply the market. Some hand loaders are trading loaded ammo for owners surplus unregistered guns. The solution for this if you think it's a problem is to never vote for a Democrat for any office, City, County, State or national.

Check history..... they hide facts there. Historically gun sales go up when a Democrat is in the White House.

Not the Republican in there now who has brought historic unemployment, lower taxes and help to the Vets who served this country.

ATF estimates that there are 120,000,000 known gun owners in the US. Anyone that to wants one, most likely already owns one.

Not guns, Jim, bullets. They need more bullets. There are a LOT of Democrats in America, after all. And they might be rising up off the couch at any moment, waving their "Sleepy Joe" banners and demanding incremental change from behind their custom made artisanal bamboo cloth masks.

Bailey> as usual you don't understand the solutions gun owners and gun buyers use. Bullets? Not a real problem, gun owners are buying them as fast as they are made. An alternate is re loaders who buy used cases from America's 6,000 private gun ranges by the barrel full. Some commercial re loaders have contracts with gun ranges to buy all the ranges have. Some gun ranges have started hiring re loaders to get in on the business. Large gun ranges might need several employees to clean, resize and reload ammo. Gun ranges are becoming favorite places for "gun show" sales. Agree on a sale at the gun show then meet at the gun range to complete the sale. The dumbest Democrats are those who think they could disarm America. Gun owners enjoy making anti gun Democrats look stupid.

This doesn't sound crazy at all.

Jim> that number represents guns government knows about. The number Government don''t know about may be much bigger. I'll bet most conservative households own at least one for every family member.

Jim> If the ATF knows you own a gun it doesn't mean they know how many you own.

Jim> The operative word is KNOWN. Unknown is the real number.

I went on line and found sites that still have 9mm bullets for sale. Some required you to by in bulk.

If people think a shortage is happening, it will because people will horde.

Jim> Bullets or loaded ammo? Bullets are a component. You might have missed a good investment when you didn't buy the maximum they offered.

Jim> 5 boxes of 50? The going price lately. Re loaders with newest equipment can do that 3 or 4 times an hour. $20 profit per box is why re loaders hope factories don't increase production. A future shortage will be primers or powder. ATF raided one shop producing 100,000 primers a day. Dum buts were mailing 500 per zip lock bag.

Coronavirus did not drive the shortage. The Riots have drive home protection gun sales and ammo shortage

So long as you’re driving to the gun store on Goodyear tires, it should all balance out.