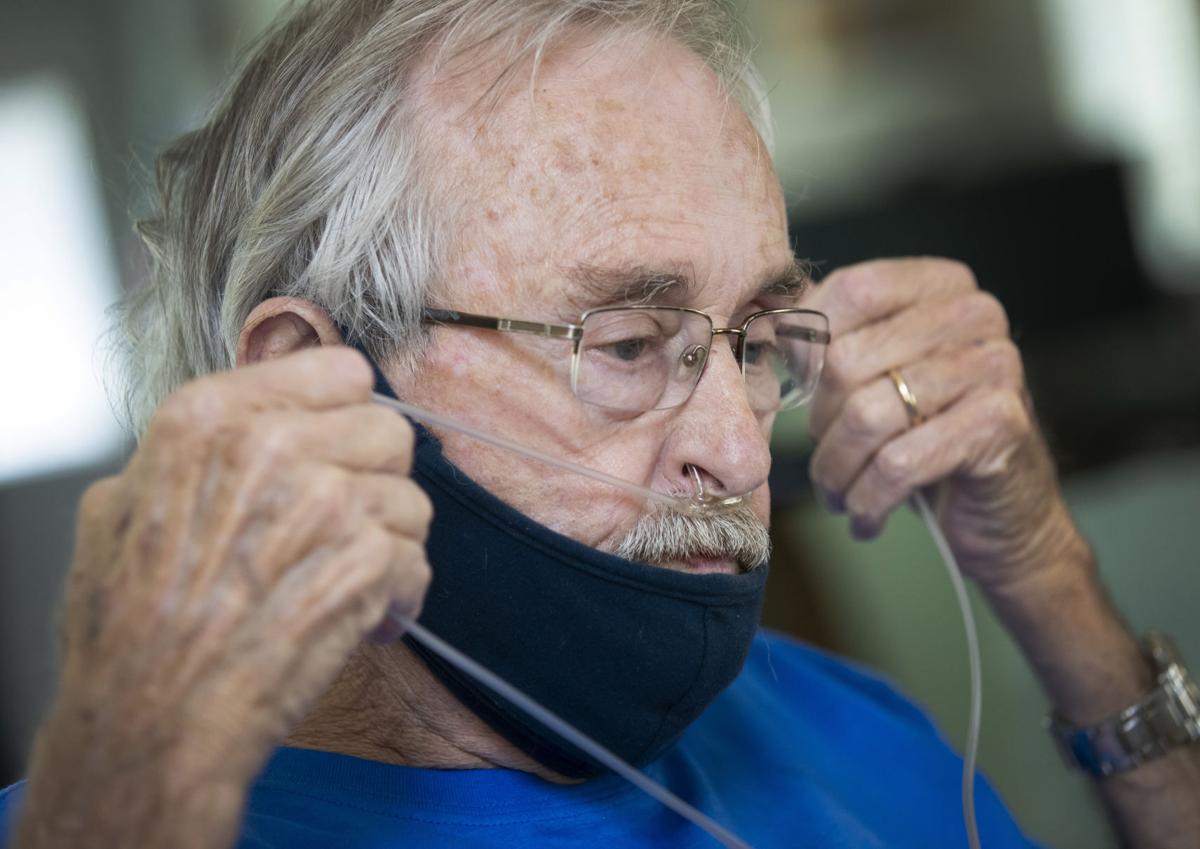 League City Mayor Pat Hallisey puts on his supplemental oxygen tube at his house in League City on Tuesday, Dec. 29, 2020. Hallisey is regaining his strength after spending weeks in the hospital battling COVID-19. 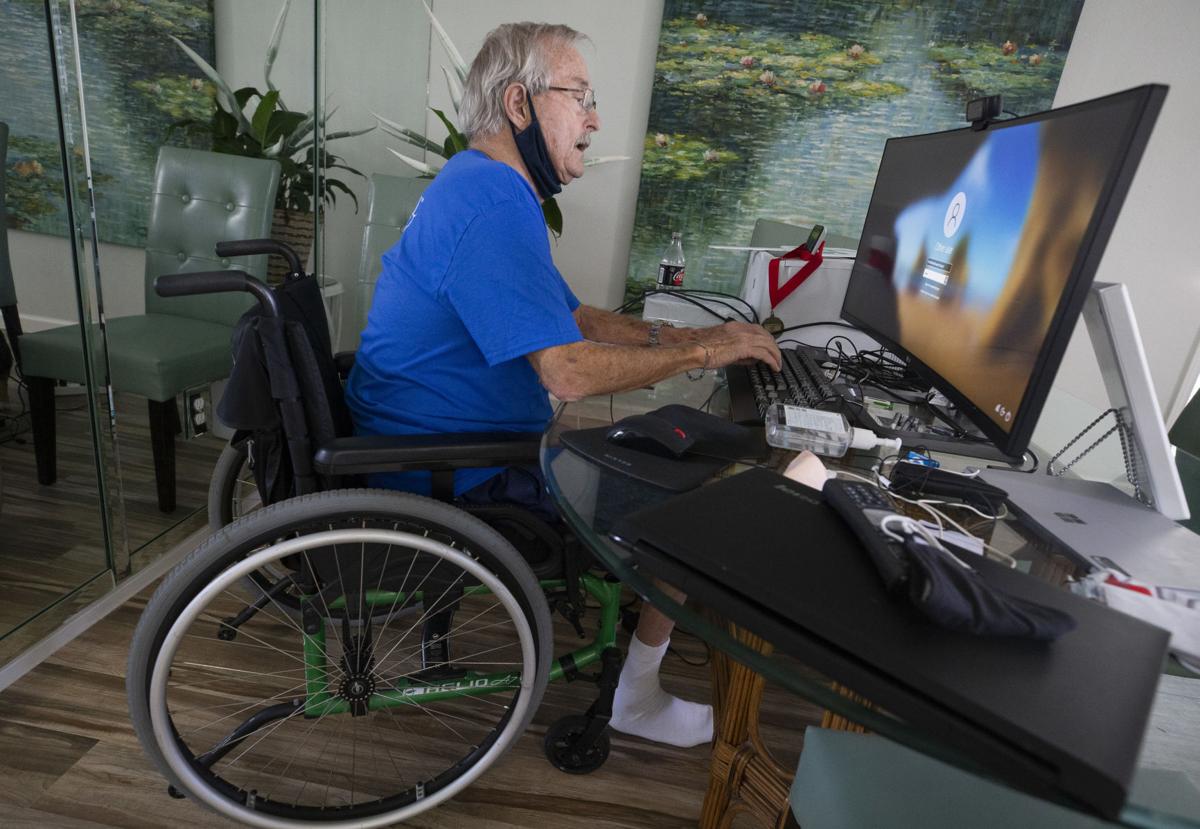 League City Mayor Pat Hallisey logs onto his computer while working at his house in League City on Tuesday, Dec. 29, 2020. Hallisey is regaining his strength after spending weeks in the hospital battling COVID-19. 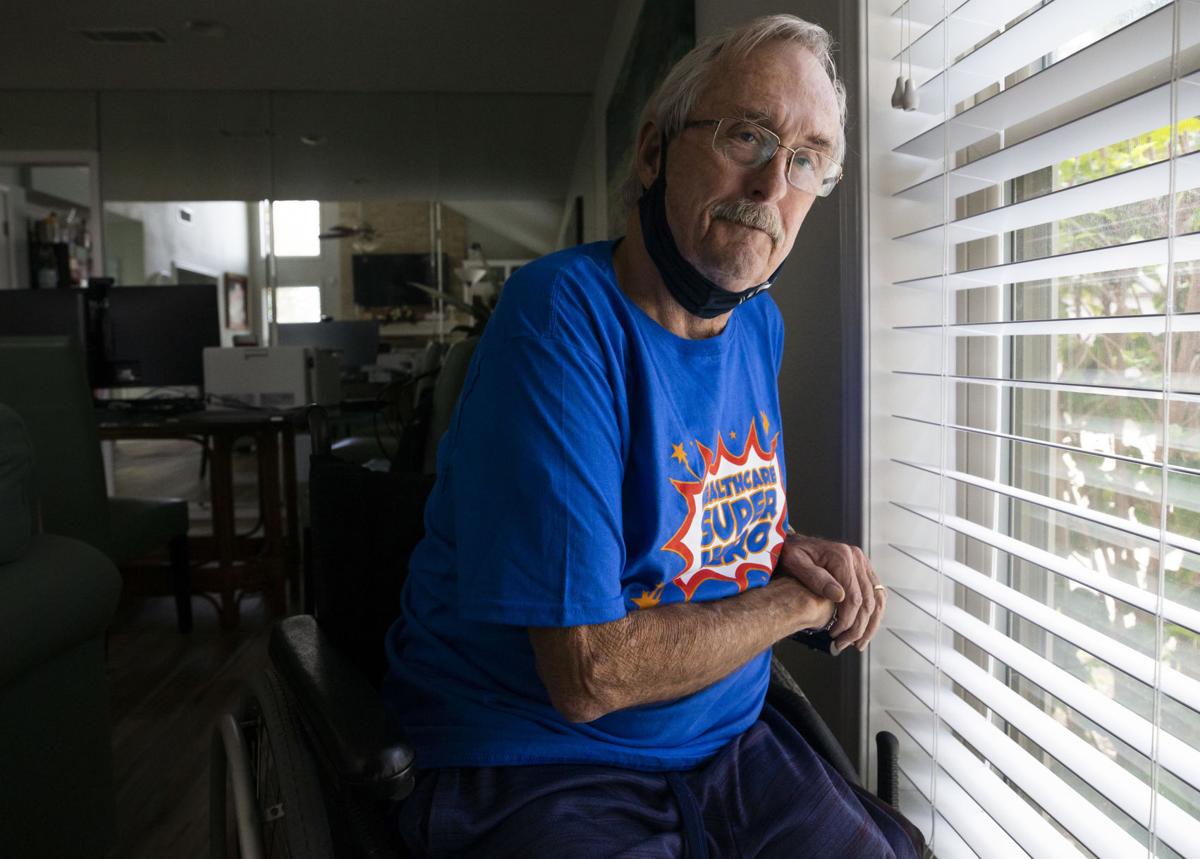 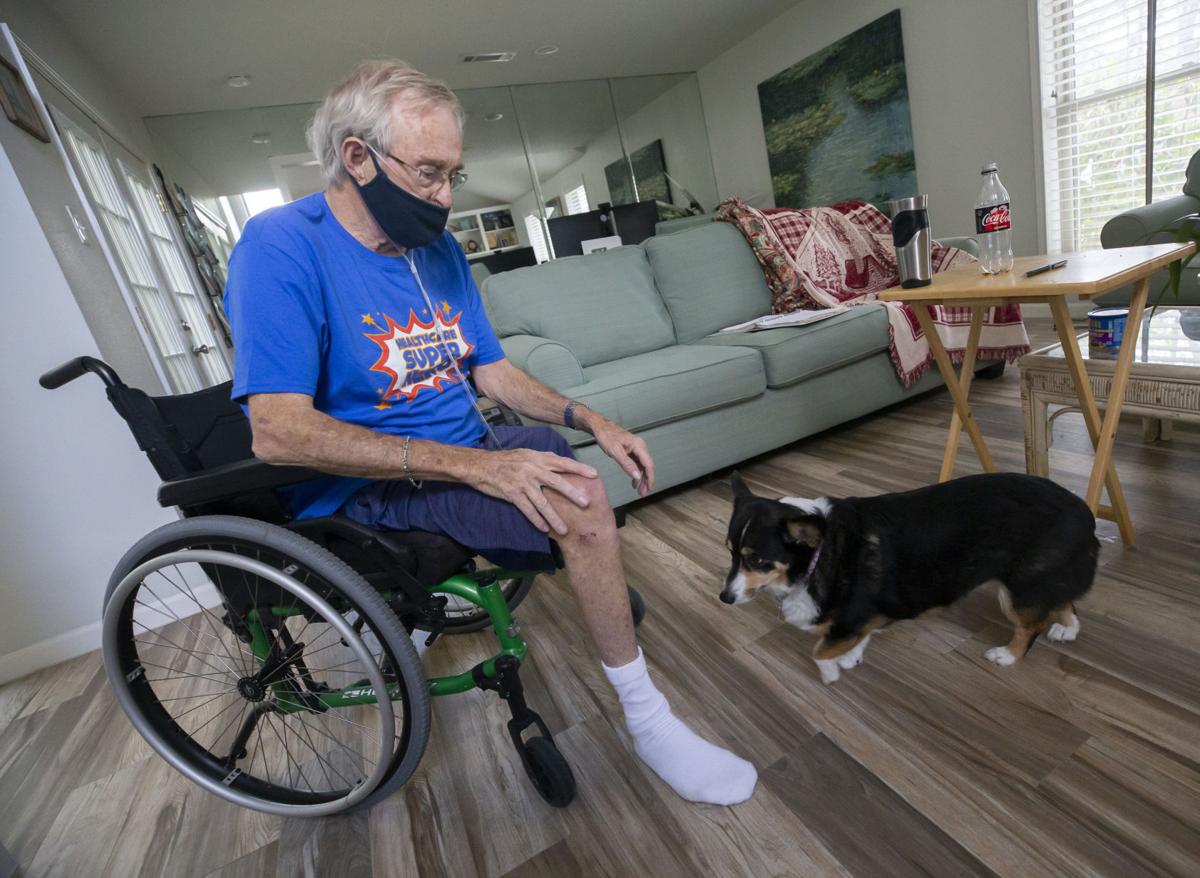 League City Mayor Pat Hallisey greets the family dog at his house in League City on Tuesday, Dec. 29, 2020. Hallisey is regaining his strength after spending weeks in the hospital battling COVID-19.

League City Mayor Pat Hallisey puts on his supplemental oxygen tube at his house in League City on Tuesday, Dec. 29, 2020. Hallisey is regaining his strength after spending weeks in the hospital battling COVID-19.

League City Mayor Pat Hallisey logs onto his computer while working at his house in League City on Tuesday, Dec. 29, 2020. Hallisey is regaining his strength after spending weeks in the hospital battling COVID-19.

League City Mayor Pat Hallisey greets the family dog at his house in League City on Tuesday, Dec. 29, 2020. Hallisey is regaining his strength after spending weeks in the hospital battling COVID-19.

In the first days after he was diagnosed with COVID-19, League City Mayor Pat Hallisey was shuttled between hospitals, placed on oxygen and, at one point, doctors even came close to placing him on a ventilator, he said.

Hallisey, 71, didn’t see anyone other than his doctors and nurses for 28 days.

He didn’t realize it at the time, but doctors have told him he was very close to joining the list of 180 coronavirus-related deaths among county residents, he said.

Out of the hospital and recovering at home, Hallisey has had time to reflect on his bout with the virus. He should have taken it more seriously from the beginning, he said.

“This is just not to be fooled with,” Hallisey said. “When I started to find out how critical I was up there and started thinking about it, the truth is that I have to express an apology to the community. I forgot about my core values because of the politics.”

But, while Hallisey now advocates for more city involvement in managing the virus’ spread, he acknowledges he, personally, should have exercised more caution.

Since Nov. 1, the Galveston County Health District has identified 6,596 new cases of COVID-19 in county residents. Of those, 2,335 cases, or 35 percent, are among League City residents, according to the health district’s data. Over the past two months, more cases have been identified in League City than any other city in the county.

City leaders have said they have no intention of invoking any orders to curb the spread of the virus.

In fact, unlike other cities in Galveston County, League City isn’t under a local disaster declaration because of COVID-19. The city allowed a declaration to lapse in April after Hallisey came under fire for temporarily closing the city’s parks.

It’s not quite clear where, exactly, Hallisey contracted coronavirus, he said. But in the days before his diagnosis, Hallisey attended several events, including a council meeting Nov. 10, a Veterans Day celebration Nov. 11 and an event at the College of the Mainland’s League City campus Nov. 12, and was photographed without a mask.

A week after those events, Hallisey was sitting on the couch with his wife, Janice Hallisey, and told her he didn’t feel well, he said. He felt similar to when he’d battled pneumonia a year earlier, he said.

“She said we were not taking any chances,” Hallisey said. “She told me to get up, and we went to the emergency room at Memorial Hermann.”

Doctors quickly diagnosed Hallisey with coronavirus and called an ambulance to take him to Memorial Hermann Southeast Hospital, where he stayed the first night, Hallisey said. The next morning, officials took him to the hospital’s campus in Sugar Land.

Hallisey would spend the next four weeks there in a room that functioned like an oxygen tent, he said.

“It was difficult to sleep,” Hallisey recalled. “They’d come in just about every hour and take blood.”

The worst part of the whole experience was the solitude, Hallisey said.

“I was so lonely, with no visitors other than staff,” he said. “I was left alone to think about what’s going on. This is the third life-threatening thing I’ve been through recently.”

In October 2017, Hallisey had a heart attack before a city council meeting. In the touch-and-go days that followed, doctors amputated his left leg.

Then, in 2019, Hallisey was hospitalized with pneumonia, he said.

It’s no exaggeration that he could have died after contracting coronavirus, he said.

“Five times per day, I’d hear the loudspeaker go off asking a rapid response team to get to whatever room number as quickly as possible,” he said. “In my mind, that meant someone was in trouble.”

The stories about people dying alone in coronavirus wards are likely not a myth, Hallisey said.

Since his release from the hospital after testing negative on his 71st birthday, he has taken it easier, he said. He attended the last council meeting of the year via Zoom and is hesitant about going out in public again, he said.

But beyond personal responsibility, Hallisey also wonders how different the world might look if city and county leaders had been more willing to take an active role from the beginning.

“When the council closed the parks in February, we heard we were trampling on constitutional rights,” Hallisey said. “I get that. I’m a big proponent of personal responsibility. But at the end of the day, do I not have a constitutional right to protect health?”

Delighted to see that Pat made it through this very difficult period. Peace be with those that lost loved ones. Here's looking forward to a brighter year for all of us.