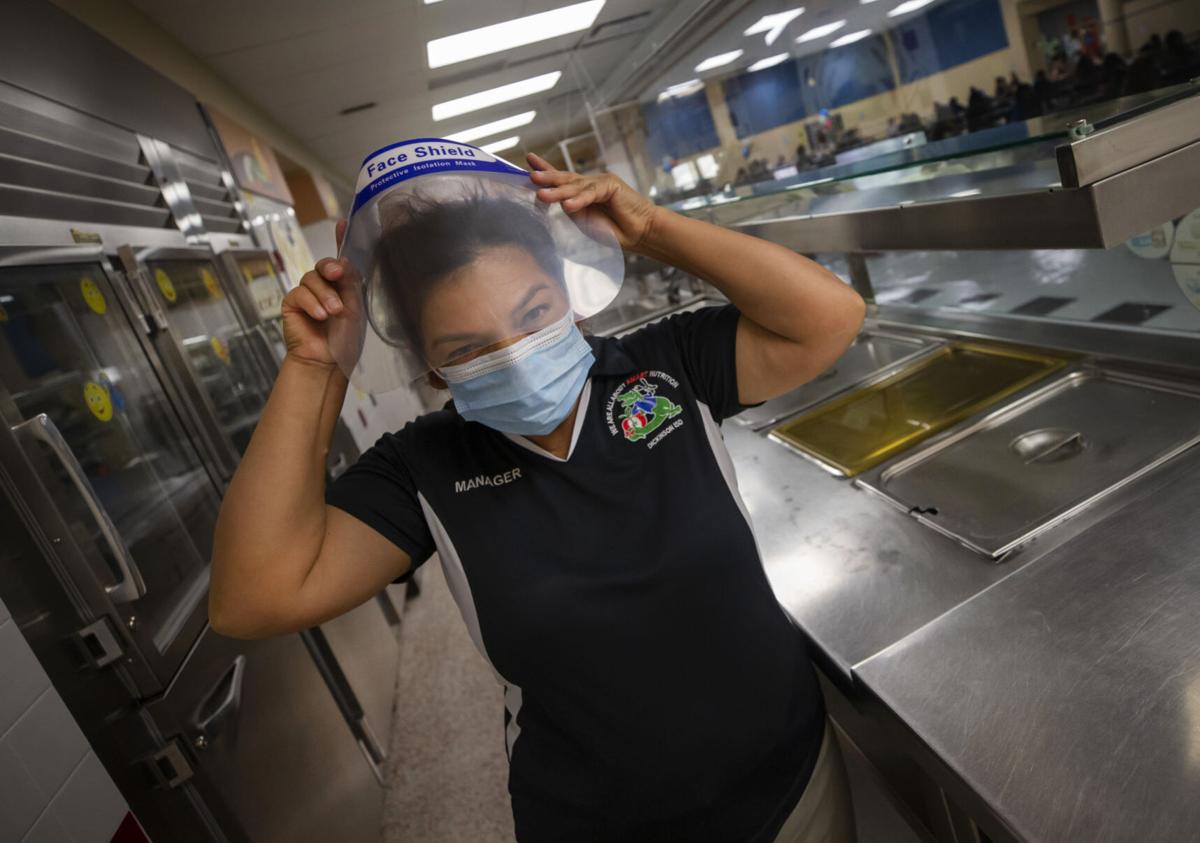 Eva Dyer, a food services manager with the Dickinson Independent School District, displays one of the plastic face shields to be worn by cafeteria workers at Silbernagel Elementary School in Dickinson on Friday, Aug. 14, 2020. 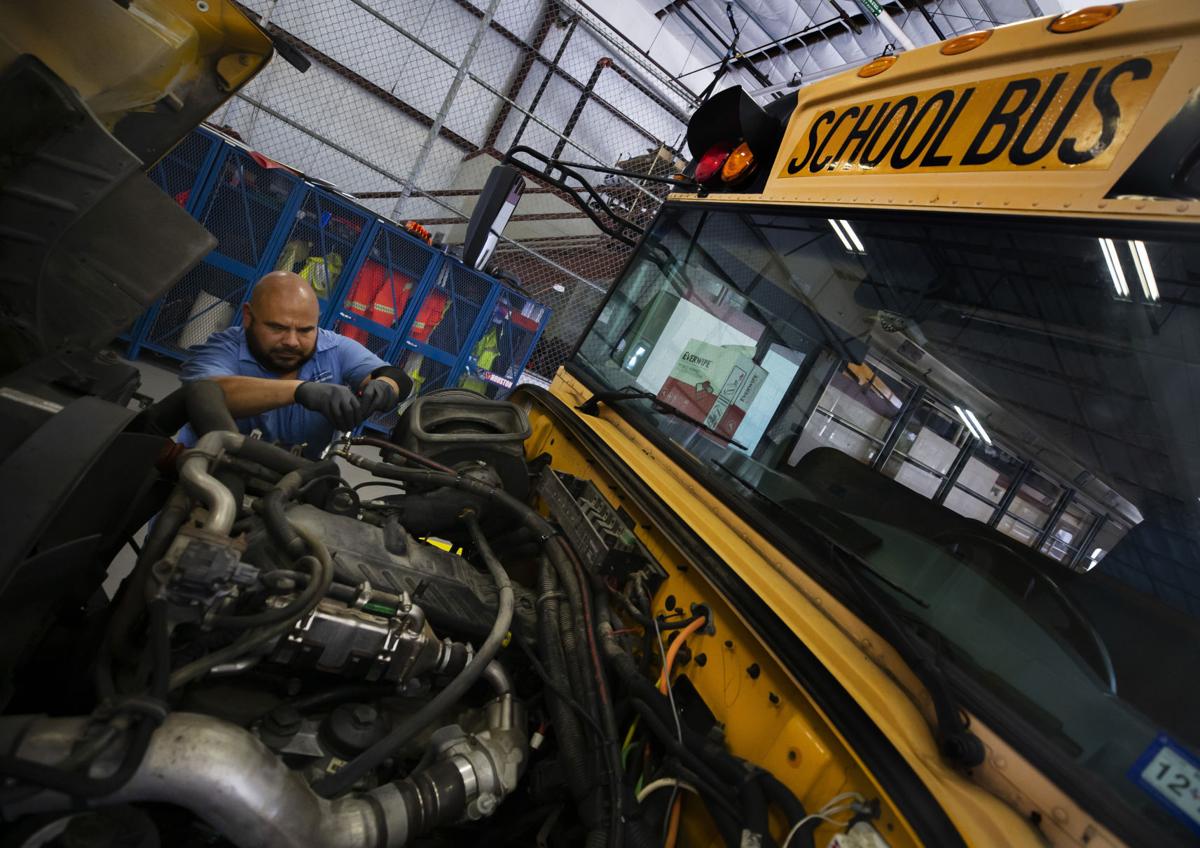 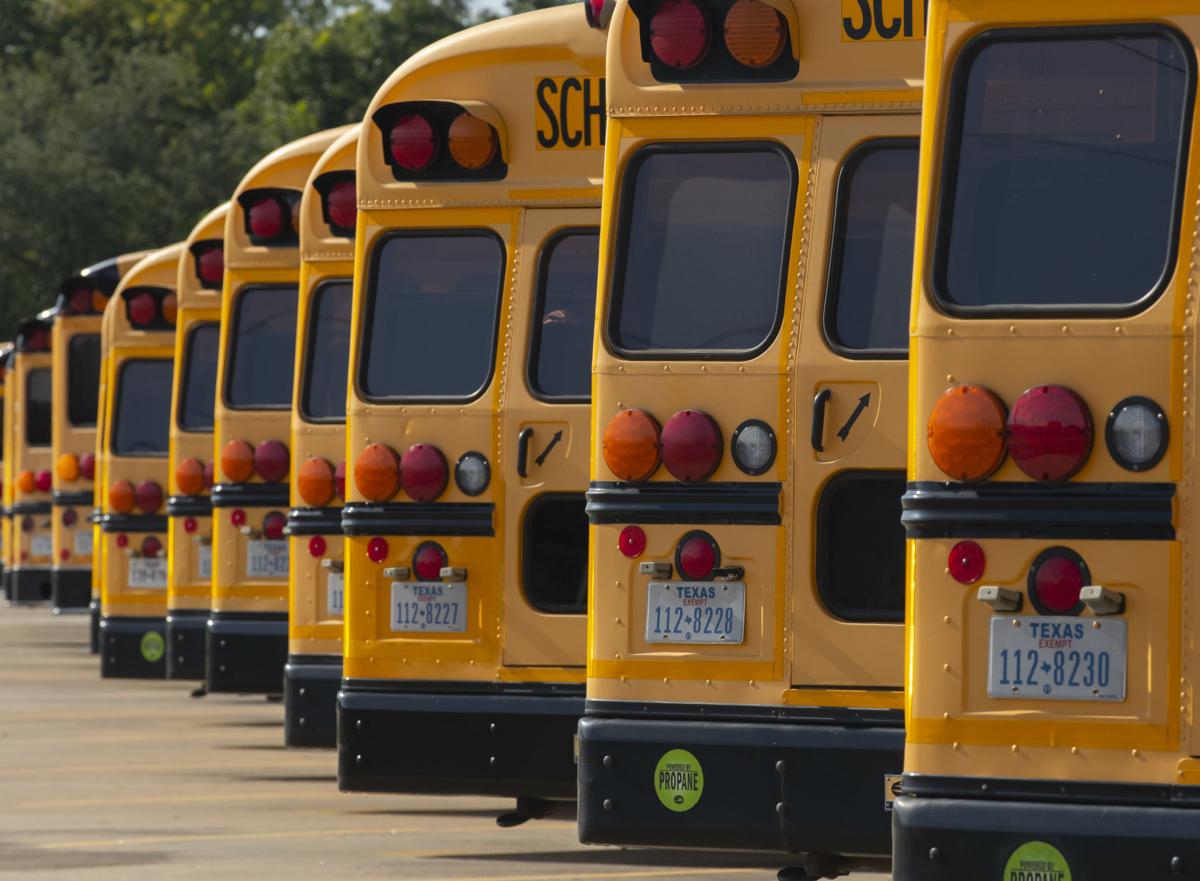 Eva Dyer, a food services manager with the Dickinson Independent School District, displays one of the plastic face shields to be worn by cafeteria workers at Silbernagel Elementary School in Dickinson on Friday, Aug. 14, 2020.

As educators make major adjustments this year to accommodate virtual and socially distanced learning in a pandemic, other employees who keep schools running also will see their duties changed, district administrators said.

Janitorial, maintenance, transportation and food-service workers will keep different hours and some will perform different jobs, at least early on, but Galveston County school districts aren’t expecting to downsize their workforces, officials said.

Of all those job classifications, bus drivers are the most likely to be doing other things as districts ease into the year with many students still learning remotely.

Even though drivers won’t be driving for the first few weeks, with most districts starting all or mostly virtually, districts aren’t planning to lay off transportation workers.

“The bus drivers who will not be driving routes will be helping on campus,” Boone said. Surplus drivers also will work as monitors on the buses that are running, he said.

Pre-K and kindergarten classes will return to campus Aug. 31, so there will be routes to drive then, Boone said. All students are scheduled to return Sept. 14, he said.

Bus drivers at Galveston Independent School District who aren’t driving a route will be going through safety and health training, distributing learning devices such as notebook computers to students or calling parents about changes to bus routes, Superintendent Kelli Moulton said.

Even during the four weeks the district plans to instruct virtually, small groups of students will return to campus and will need transportation, Moulton said.

“We certainly want all of our employees to have meaningful work that supports the mission and the foundation of the school district,” Moulton said.

IMPORTANT TO KEEP PEOPLE ON

If employees need extra work during the year for whatever reason, the district can always use people to monitor social distancing in cafeterias and other common spaces, Moulton said.

“We’re convinced that it’s important to keep people on the payroll at this time because of the hardship on the organizations to fill those positions,” Moulton said.

That includes posting requirements, interviewing, background checks and other hiring procedures, she said.

Food services also likely will be altered significantly because many students who are learning virtually will need meals delivered to them, Boone said.

That will involve much more coordination and advanced work to ensure students get the meals they need, especially those who are on free or reduced-cost lunch programs, Boone said.

Custodians might be working more and at different hours this year.

The custodial staff at Texas City Independent School District, for example, generally works after students have left the buildings.

“We’ll be staying late to make sure everything is cleaned,” Ramos said.

For custodians, that’s not a big deal since they’re accustomed to responding to emergencies as they come up, she said.

The district is assigning custodians to specific areas of buildings to clean, she said.

For maintenance staff, things won’t change too much either, said Daniel McEachern, an electrician with the Texas City district.

The team has been working through the summer and already made some changes, he said.

“We staggered our start time, our lunch, our clock-out times so there’s not groups of people together,” McEachern said.

Maintenance staff members will be scheduled to work so they’re not in the same areas as students and won’t go into teachers’ classrooms while there are students in the room, McEachern said.

Galveston also will be preparing counseling lessons for students on character-building and on hygiene that teachers can show their students virtually, Moulton said

Meals will be delivered to students homes ? Isn't this pu$hing it a bit ? If the student gets a headache can the school nurse deliver aspirin ?

Some students need the meals.

"That will involve much more coordination and advanced work to ensure students get the meals they need, especially those who are on free or reduced-cost lunch programs, Boone said."

Unfortunately, not everyone in this country can afford food, including 11,000,000 children (pre-pandemic).

Through the Department of Agriculture’s Community Eligibility Provision (CEP) program, Galveston ISD Child Nutrition will provide breakfast and lunch for the 2019-2020 school year to all children at no charge.

GISD Child Nutrition is changing its policy for serving meals to children served under the National School Lunch Program and School Breakfast Program for the 19-20 school year. All campuses have been accepted to operate the CEP offered by the USDA and will now provide free breakfast and lunch to all children.

I think this is money well spent.

A one-time payment from the federal government is available to every child who received free meals under the National School Lunch Program.