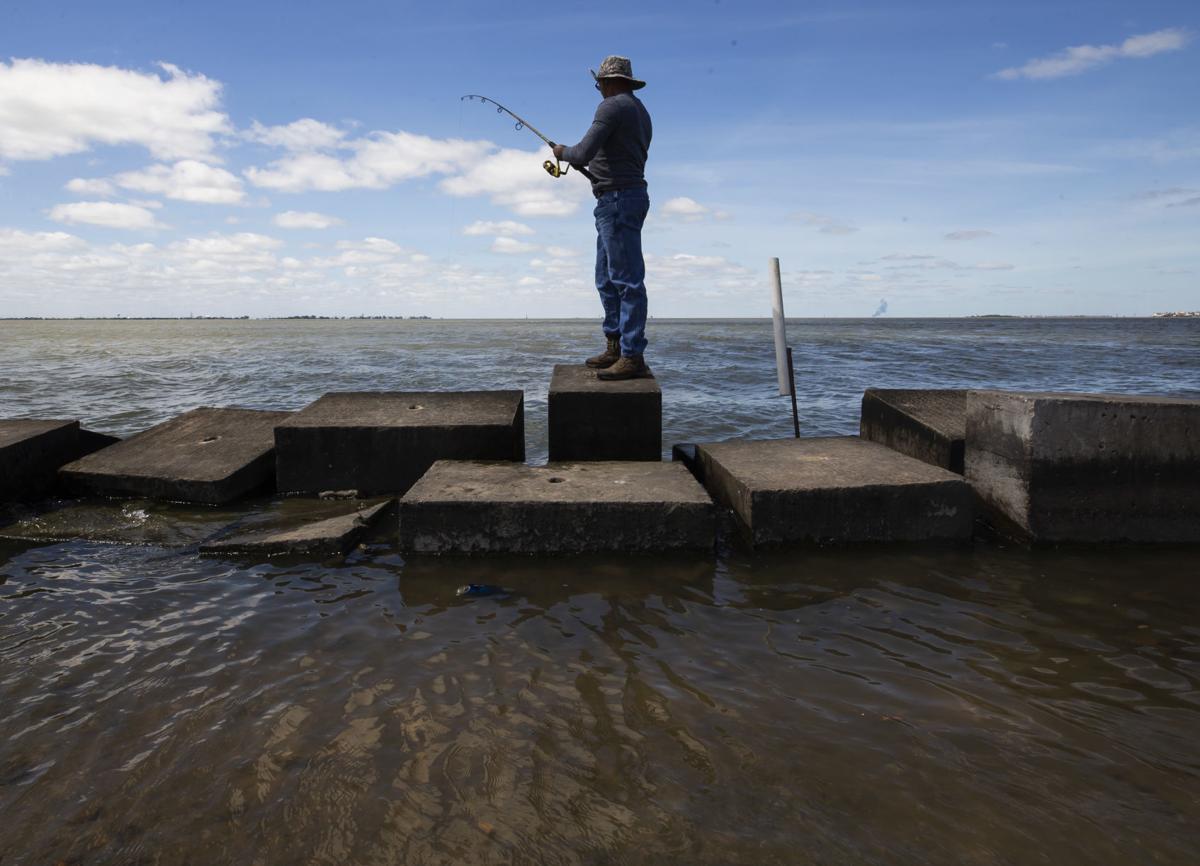 Paul Bernard, of The Woodlands, fishes from the stones near the George and Cynthia Mitchell Memorial Causeway in Galveston on Wednesday, April 1, 2020.

The city’s order was made in an effort to promote social distancing and discourage tourists from visiting, but it could leave room for some discussion, officials said.

Yarbrough is investigating whether fishing piers could be considered essential services, he said.

The city decided to close fishing piers and charters to promote social distancing and to send a message that tourists shouldn’t come to the island, Yarbrough said.

“On the piers, people were not adhering to that distance issue,” he said.

People are allowed to fish in Galveston but not from the beachfront or piers, city spokeswoman Marissa Barnett said.

The city Sunday barred public access to beaches over growing concern that tourists were continuing to flock to the island.

“We have shut down venues where social distancing cannot be observed,” Barnett said.

People can still fish as long as they avoid commercial piers and the beach, and they can fish from private boats.

Before Galveston Fishing Pier shut down to comply with orders, it only allowed 90 to 100 people on at one time and required people to stand 6 feet apart, Kelli McClure said.

“We had someone walk up and down the pier to regulate and make sure,” Kelli McClure said.

She’s not upset at the city because a lot is happening quickly, but she’d like to talk about reopening fishing piers under guidelines, she said.

The state’s distinction of fishing as an essential service assumes some people need to fish for their food, Jimmy McClure said.

That’s the case with many customers as the Galveston Fishing Pier, Jimmy McClure said.

“They spend their $12 and that $12 goes much, much further in fish than it would at a market,” Jimmy McClure said. “They get ice; they fill that cooler up with fish and take it home.”

Standing in the open air of a fishing pier, 6 feet from others also is probably safer than going to a crowded grocery store, Jimmy McClure said.

But there likely aren’t that many people in Galveston who rely on fishing for food, said Shane Cantrell, owner and operator of fishing charter company Galveston Sea Ventures.

“It’s a common thing that people claim,” Cantrell said. “To call it subsistence fishing is a stretch.”

Cantrell’s business essentially is shut down, but he doesn’t want tourists visiting the island during the pandemic, he said.

“I don’t want a bunch of carriers coming onto Galveston Island,” Cantrell said.

Cantrell thinks there’s a way for fishing piers and charters to operate safely and follow social distancing rules, but the orders must be clear, he said.

The Galveston City Council will meet Friday when it will discuss whether to extend or modify a slew of orders the mayor has implemented, including the one about fishing piers and charters.

Reporter took my words out of context in interview

"People can still fish as long as they avoid commercial piers and the beach, and they can fish from private boats."

Most people, if they can't access the beach in Galveston can't fish. Fishing is now limited to people with boats or waterfront access, in most cases, the more wealthy of the population. Leadership at its best!

Mike> Restricting access to fishing opportunities is against State ruling that fishing is an approved activity. Time in the sun and fresh air is a health benefit to people stressed out by being confined to house or apartment. Confinement has already increased domestic violence.