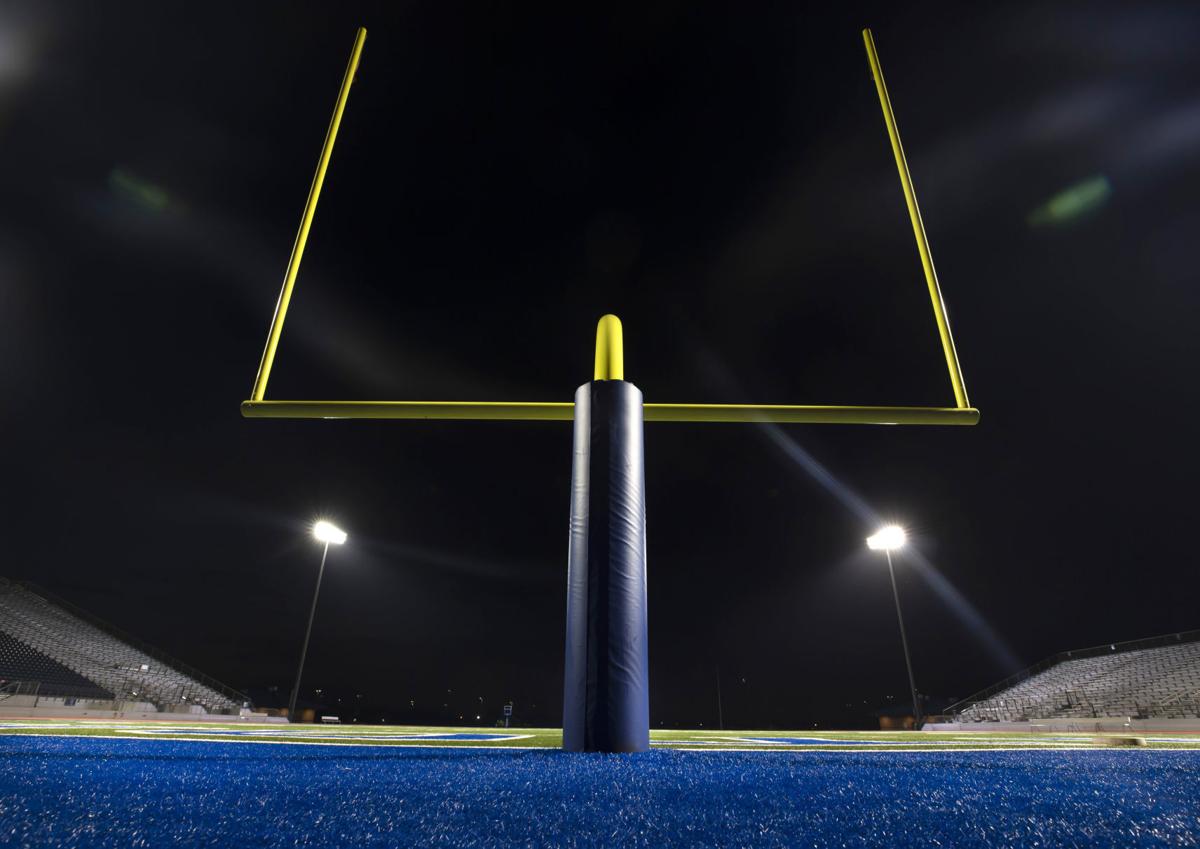 The high school sports landscape could be drastically changed in the fall because of the ongoing coronavirus pandemic. 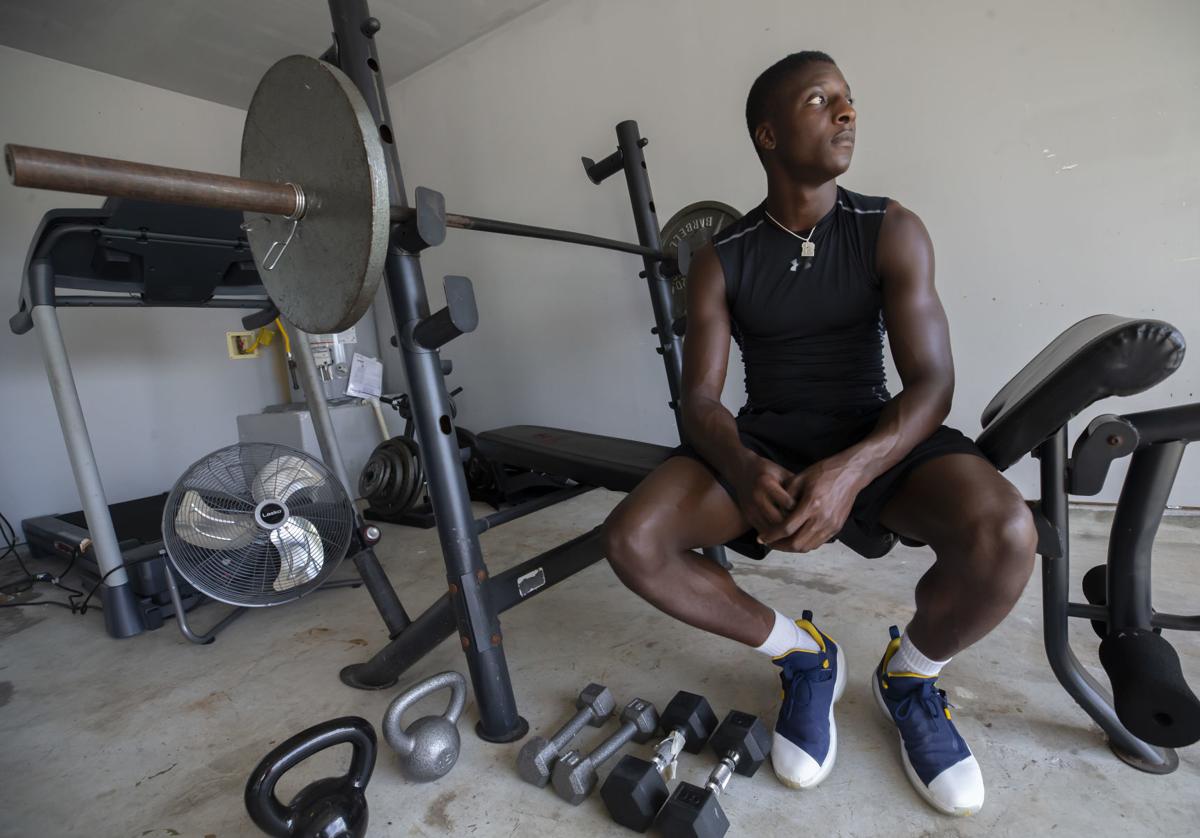 La Marque High School athlete Jauron Reid Jr. takes a break between sets of exercises while working out at his house in Texas City on Tuesday, July 7, 2020. Reid, who is entering his senior year, is worried the lingering coronavirus pandemic will affect school sports this fall. 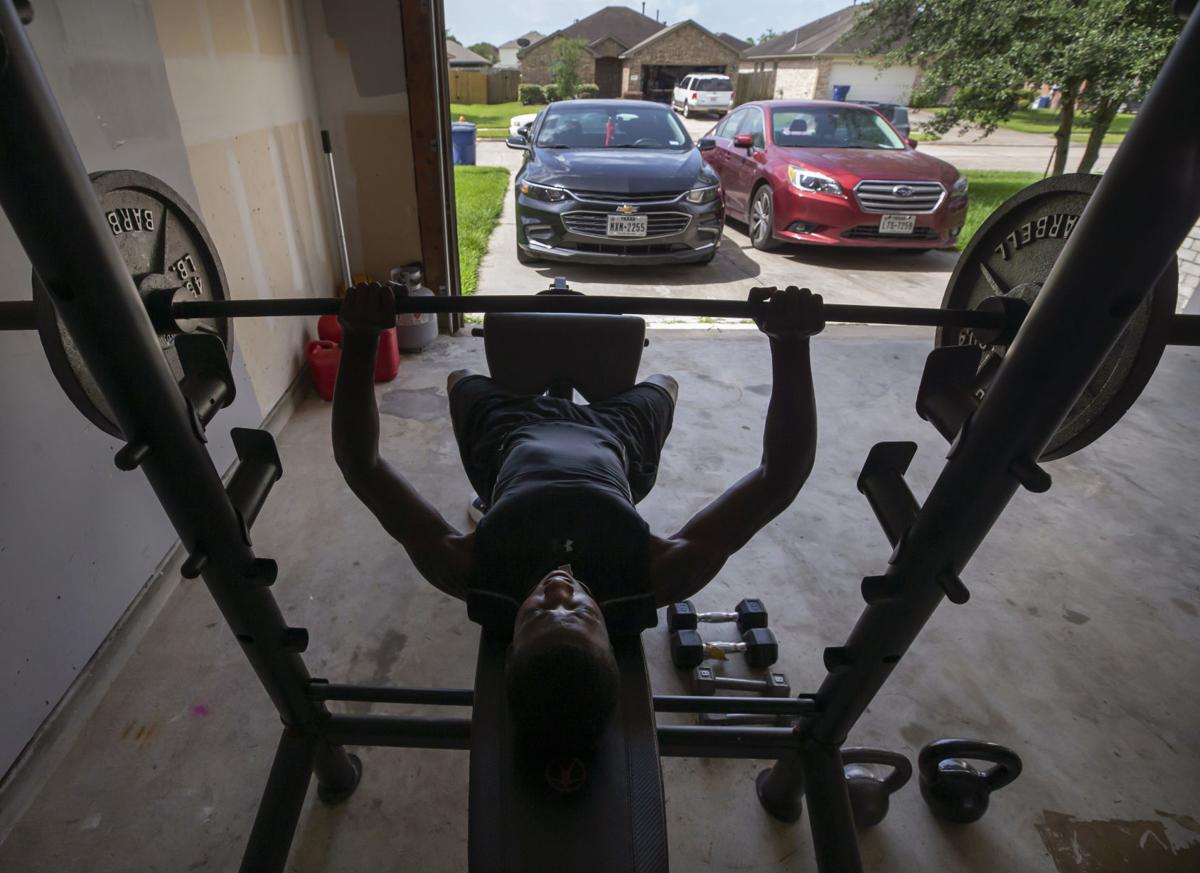 The high school sports landscape could be drastically changed in the fall because of the ongoing coronavirus pandemic.

La Marque High School athlete Jauron Reid Jr. takes a break between sets of exercises while working out at his house in Texas City on Tuesday, July 7, 2020. Reid, who is entering his senior year, is worried the lingering coronavirus pandemic will affect school sports this fall.

La Marque Cougars football player Jauron Reid Jr., like many local student-athletes, is spending the summer preparing for a season that may not come.

During these uncertain summer days, Reid frequently can be found weight training in his garage, playing unsanctioned touch football games with friends from La Marque and Ball high schools in a park near College of the Mainland or working with a physical trainer.

“With COVID going on, everybody’s saying that we might not play, so I’m very worried about the season right now,” Reid, an incoming senior, said. “It’s my last year of high school.”

The University Interscholastic League hasn’t yet stated how or even if high school sports scheduled for the fall can happen. The first volleyball scrimmages are slated to happen in 30 days, the first football scrimmages a week after that — and the numbers of reported COVID-19 cases in Galveston County have shown no signs of slowing down.

So, what would it mean if high school student-athletes couldn’t play games in the fall?

For starters, student-athletes hoping to catch the eyes of college recruiters to earn athletic scholarships will have to do so without 2020 game footage to show off both their abilities and their intangibles.

“College coaches want to see how kids deal with success and failure,” Dickinson athletic director and head football coach John Snelson said. “They want to see how good of a teammate he is — does he only get happy when he does something good or is he congratulating his teammates whenever they do something good.”

Players who are — as La Marque head football coach Shone Evans put it — 6-foot-3, 225 pounds and chiseled out of rock will still stand out to recruiters regardless of available game footage.

But, prospects like Reid — a wide receiver and defensive back who has the ability to play at the next level but who at 5-foot-10 isn’t immediately noticeable — will have to go the extra mile to get an offer to play college football.

While Reid has started for the Cougars since he was a sophomore, a lack of game footage could especially be an issue for incoming seniors who have college-level talent but who weren’t going to break into the starting lineup until this season.

“We have a lot of good incoming senior players who were backups last year, and they have a little bit of tape but not a bunch,” Snelson said.

With no games in 2020, colleges will have to rely more heavily on workout footage to recruit athletes, but that can be an imperfect science in evaluating talent.

The lack of a high school season is not as problematic for volleyball players, who can fall back on club teams and beach volleyball leagues for game footage to show college recruiters.

That’s not the case with football, though. With no high school football games, Snelson said he could envision people starting up football leagues — maybe similar to the State 7on7 Organization, which holds touch football competitions during the summer — to fill the void.

“But, at the end of the day, football is a collision sport, and it’s important for college coaches to see them in pads and not just playing touch football,” Snelson said.

McClellen worries more about the mental health effects her players might feel from not being able to play games. Players participate in high school sports for the pride of performing in front of their friends, teachers and community, whereas the travel schedules of club teams often limit an athlete’s fan section to just their parents and siblings, McClellen said.

Sports provides many student-athletes with an outlet to relieve anxiety, and having them instead sitting at home disappointed and frustrated because their seasons have been canceled is concerning, Snelson said.

Losing a season, especially a senior season, also is a tough emotional blow to a student-athlete raised in communities where sports is an ingrained aspect of the culture, Koopmann said.

“I’m sure it’s the same way in Dickinson and Galveston as it is in Friendswood in that we have kids in fourth and fifth grade who can’t wait until they’re a Mustang,” he said.

For seniors, a lack of closure to their high school athletic careers is something they could carry with them for a lifetime, Friendswood head volleyball coach Sarah Paulk said.

Reid is confident he’ll earn that elusive college football scholarship offer, season or no, but the third-generation Galveston County football standout, who also participates in basketball, tennis and track and field, said he’d still hate to miss out on his senior season.

“I’d be devastated not playing my last season of high school,” Reid said.