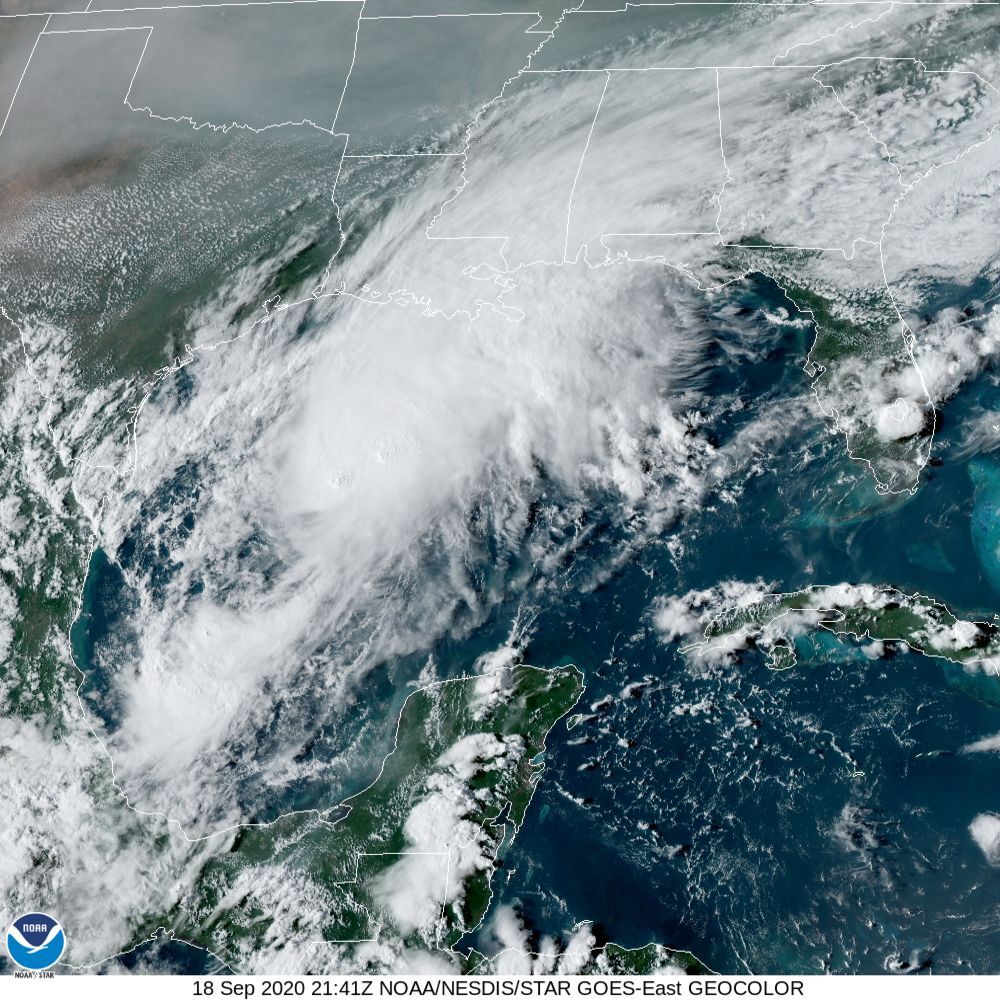 Tropical Storm Beta formed in the Gulf of Mexico on Friday, Sept. 18. 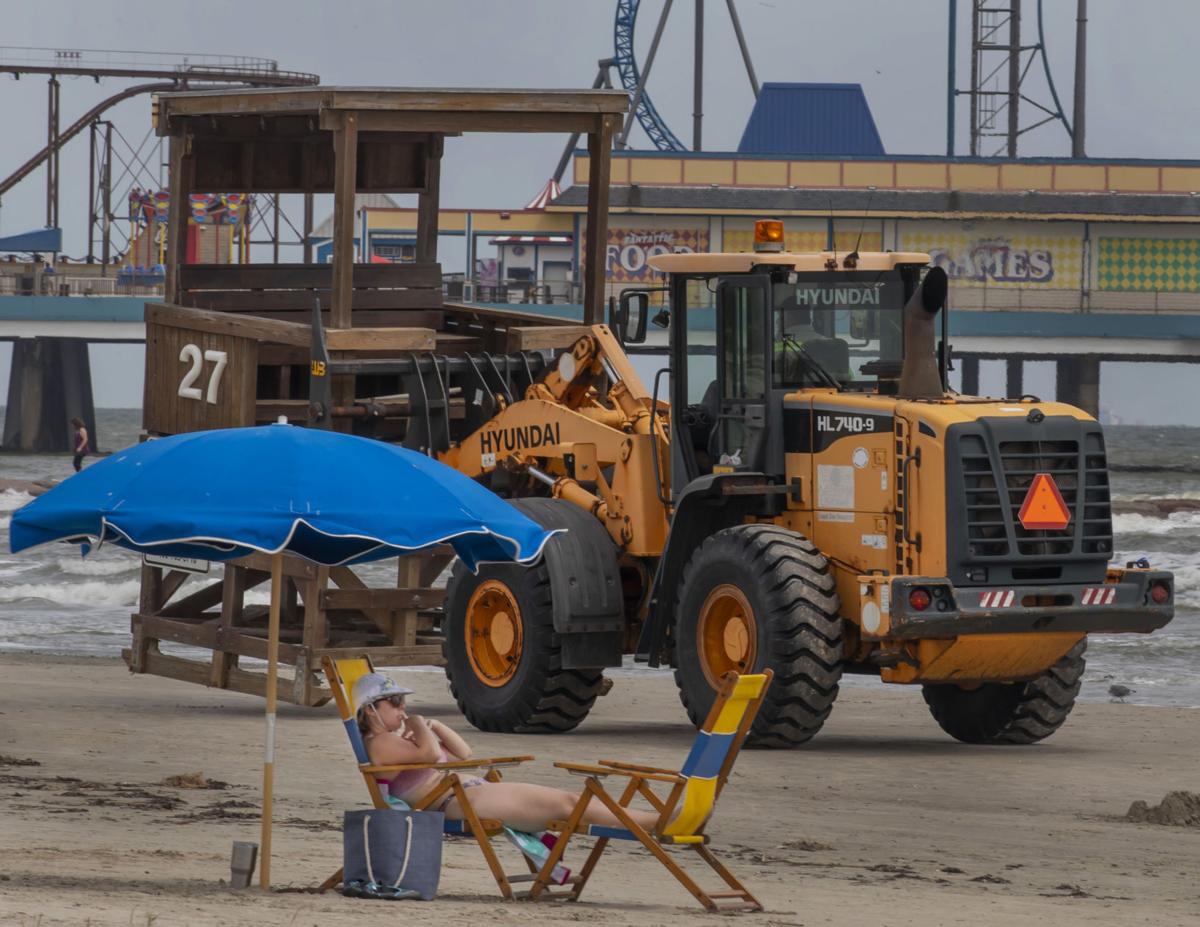 Crews move lifeguard stands past beachgoers near 25th Street in Galveston on Friday, Sept. 18, 2020, in preparation for the effects of Tropical Storm Beta. The storm is expected to bring rain and high tides to the area over the next week. 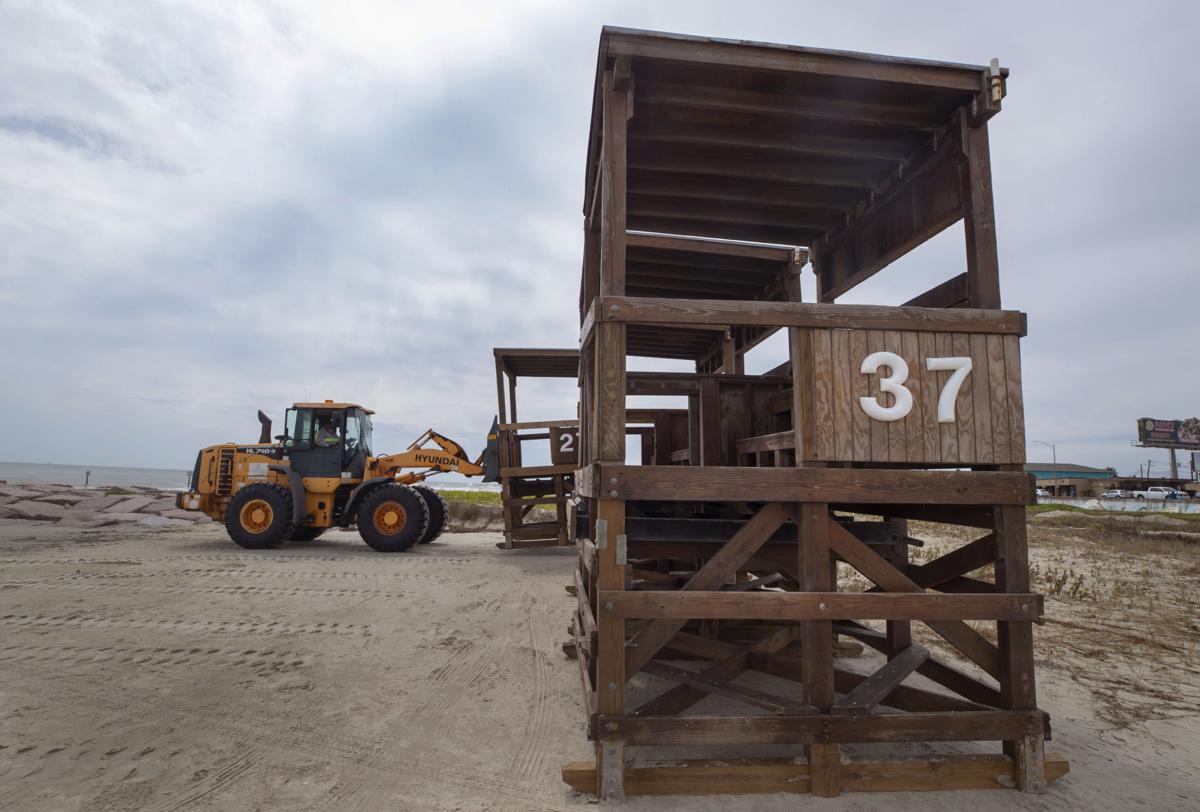 Crews stack lifeguard stands on the beach near 25th Street in Galveston on Friday, Sept. 18, 2020, in preparation for the effects of Tropical Storm Beta. The storm is expected to bring rain and high tides to the area over the next week.

Tropical Storm Beta formed in the Gulf of Mexico on Friday, Sept. 18.

Crews move lifeguard stands past beachgoers near 25th Street in Galveston on Friday, Sept. 18, 2020, in preparation for the effects of Tropical Storm Beta. The storm is expected to bring rain and high tides to the area over the next week.

Crews stack lifeguard stands on the beach near 25th Street in Galveston on Friday, Sept. 18, 2020, in preparation for the effects of Tropical Storm Beta. The storm is expected to bring rain and high tides to the area over the next week.

With nearly two months left in the 2020 Atlantic Hurricane season, the number of named storms increased by three Friday with the formation of Tropical Storms Wilfred, Alpha and Beta, with the latter causing the most concern for Galveston and the Texas Gulf Coast.

The storms are the 21st, 22nd and 23rd of the season, which has been so prolific the National Hurricane Center has worked its way through the alphabet and resorted to using Greek letters as names, which it has done only once before and not since 2005.

Beta, which was named at 4 p.m., is a slow-moving system that beginning Sunday could deliver heavy rains and damaging storm surge.

The storm differs in speed and form from Hurricane Laura, the powerful windstorm that threatened Texas just three weeks ago. But local officials said residents in coming days must pay close attention to the weather and prepare to take precautions.

WHAT BETA WILL BRING

The storm is expected to approach the Texas coast on Sunday and then begin moving north again on Monday. Depending on the track it takes, the storm could bring tropical weather anywhere between the Texas-Mexico border and southern Louisiana, weather trackers said.

Although exact forecasts were unclear, Galveston County was at the very least bracing for higher tides expected to swamp low-lying areas of the island beginning Sunday night.

The surges could be between 5 feet and 7 feet higher than normal, according to the National Weather Service in League City.

The high tides could combine with about 15 inches of rain between Sunday and Thursday to flood some coastal counties, according to the National Weather Service.

Galveston County Judge Mark Henry, Galveston Mayor pro tem Craig Brown and Dickinson Mayor Julie Masters said it was possible they would order voluntary evacuations of some areas — on Bolivar Peninsula, the West End of Galveston and near Dickinson Bayou — if it appears flooding could cut people off from emergency services.

Henry was nearly certain to call a voluntary evacuation from Bolivar Peninsula, he said. Severe storm surge conditions could cut off state Highway 87 and suspend operations of the Galveston-Port Bolivar Ferry.

“We’re asking people to stay tuned and pay attention,” Henry said. “It’s going to have an impact on us. We don’t know how significant an impact that’s going to be.”

In Galveston, Brown said city officials were comparing Beta to Tropical Storm Frances, a 1998 storm that spawned a tornado in Galveston and dropped more than 20 inches of rain on parts of the greater Houston area.

“We may be able to handle it,” Brown said. “It depends on how the storm tracks. This type of tides and storm surge will put water under some of those houses on the West End and will cause flooding on The Strand. Hopefully it won’t get into the stores, but there’s a possibility it will get into the downtown area and other low-lying areas.”

A 4 p.m. forecast from the National Hurricane Center predicted Beta would be near hurricane strength by Sunday night. But worries about the system already were prompting preparations Friday.

The park board on Friday also began moving trash cans and lifeguard towers off the beach and out of the way of high tides. The city of Galveston began checking storm drains for blockages and advised people to remove loose items from their yards and prepare to park vehicles on high ground.

The Port of Galveston warned mariners it expected tropical storm conditions in the next 72 hours. Officials advised vessels in the port to be prepared to leave by 7 p.m. Sunday or make plans to remain in the port through the storm.

With 70 days left in the hurricane season, 2020 seems on track to surpass 2005 for the record of the most named storms in a single season. That year also had a Hurricane Beta, which formed in late October, while another four storms — Gamma, Delta, Epsilon and Zeta — formed in November and December.

This past week marked the average peak of hurricane season. After the peak, it’s still reasonable to expect more storms during a season, said Texas State Climatologist John Neilsen-Gammon, a professor of atmospheric sciences at Texas A&M University.

“We’re past the peak of hurricane season, but we’re not very far past it,” he said. “Even in a normal hurricane season, we’d expect to see more named storms after today. The conditions are still there today. We have a very good chance of moving further down the Greek alphabet.”

The 2020 season has been active because of warm temperatures in the Atlantic and the absence of storm-killing wind shears that can prevent development.

“The winds that might rip apart a hurricane just aren’t there,” Neilsen-Gammon said.

The sheer number of storms that have formed, or might form, this year isn’t directly attributable to climate change, Neilsen-Gammon said. But stronger, faster-developing and rainier storms and conditions that lead to severe storm surge can be attributed to climate change, scientists have said.

If a good thing comes from the high number of storms this year, it might be improving models that predict where a storm might make landfall and what effects it might bring.

“The main problem with understanding extreme storms and extreme weather trends in general is that they’re extreme, they don’t happen all that often,” Neilsen-Gammon said. “The more events there are, the more we’re able to understand whether our models are doing a job of simulating the events.”

What's in a name

With the formation of three new tropical storms on Friday, major storms in the Atlantic will now start using the Greek alphabet as their names. Here's a refresher on what those names could be.

Not caused by climate change? If a barber says he is seeing more dandruff lately some weather (? expert? ) will claim it's proof of climate change.

Hurricanes have hit this area about once every decade for centuries. We are overdue.