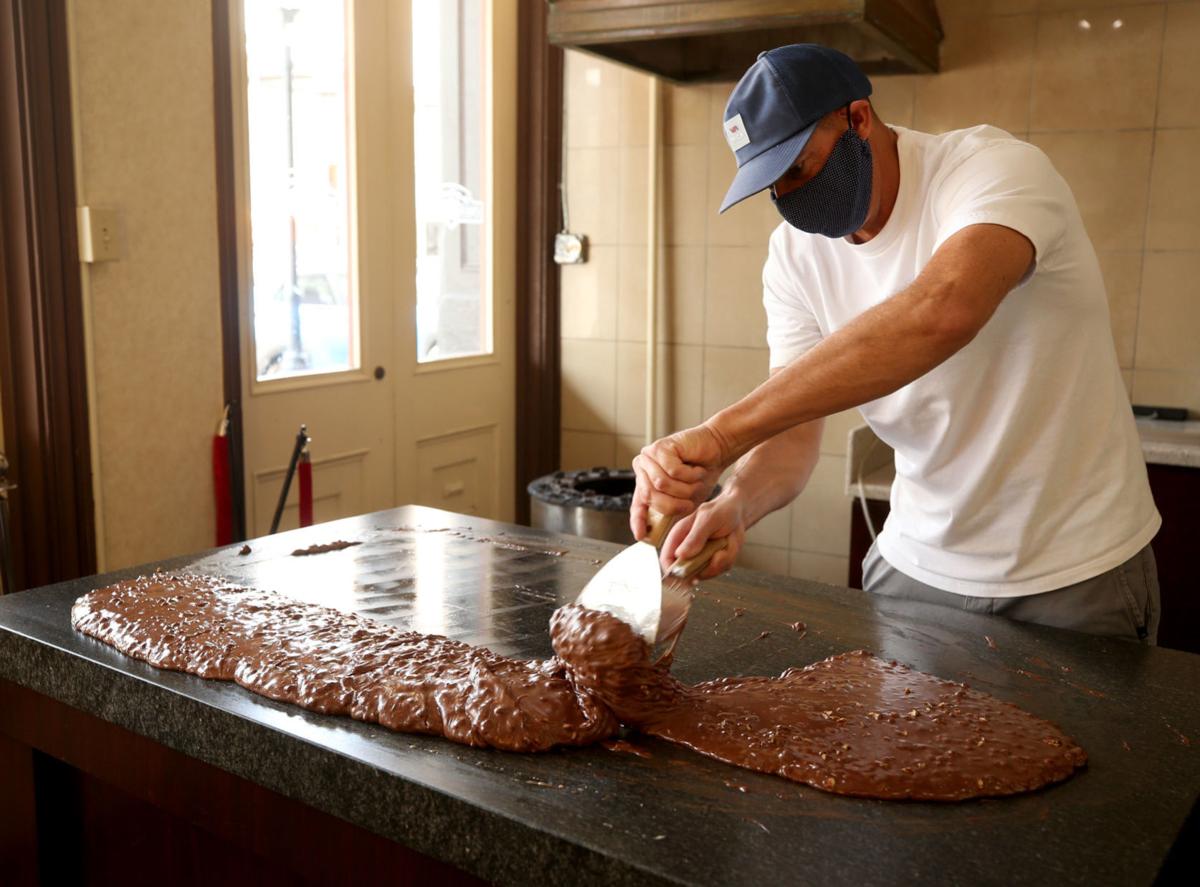 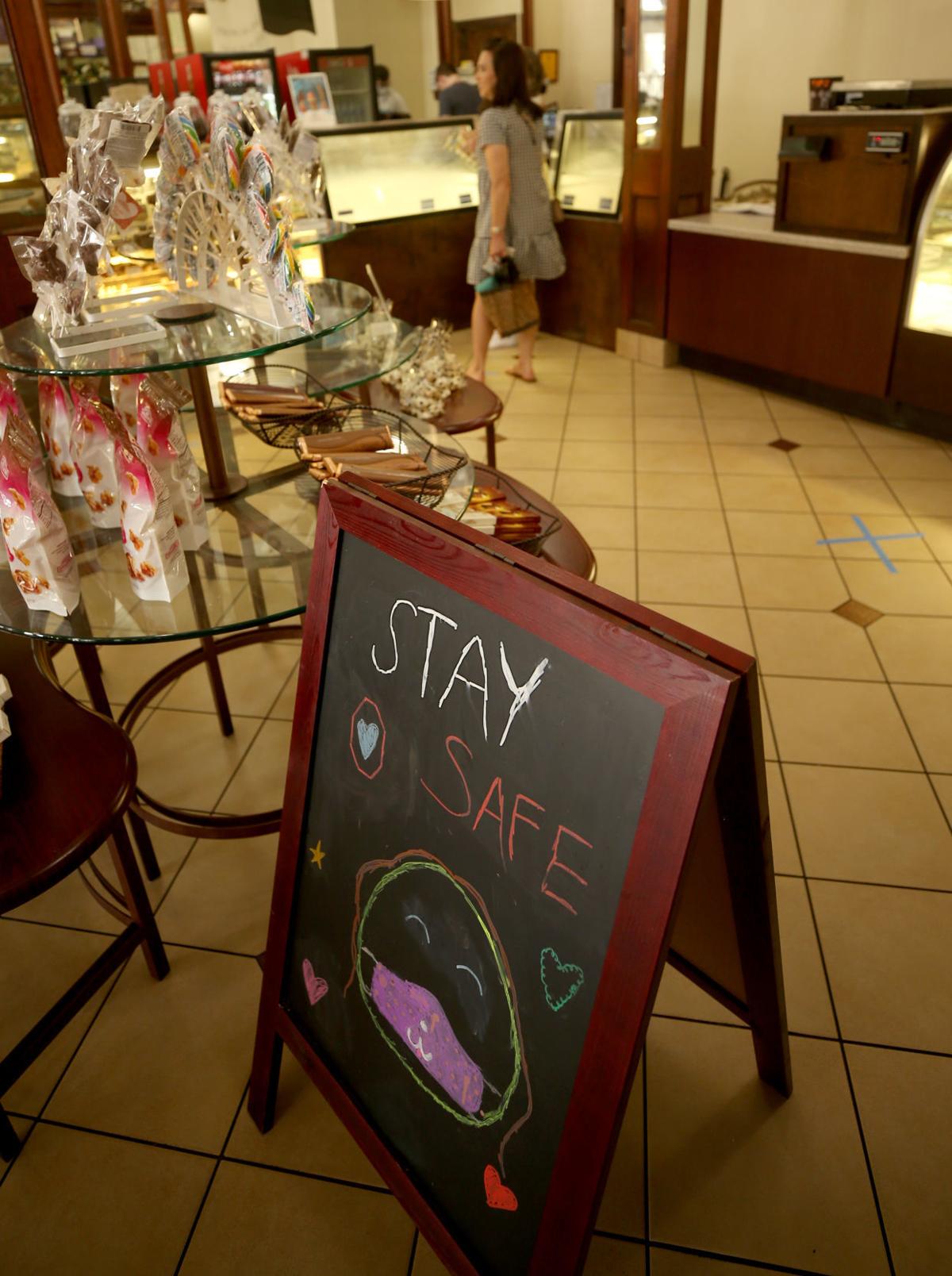 A sign at the Rocky Mountain Chocolate Factory, 2225 Strand in Galveston, reminds customers to stay safe and to wear a mask on Tuesday, May 5, 2020. There are also social distancing marks taped to the floor to help customers know where to stand.

A sign at the Rocky Mountain Chocolate Factory, 2225 Strand in Galveston, reminds customers to stay safe and to wear a mask on Tuesday, May 5, 2020. There are also social distancing marks taped to the floor to help customers know where to stand.

As businesses begin to reopen under Gov. Greg Abbott’s orders, more people are returning to work. Some are eager to again earn paychecks, while others fear contracting a virus that has essentially shut down the economy for six weeks.

Last weekend, many restaurants, museums and malls opened their doors at limited capacity after Abbott announced his plan to start reopening the Texas economy. In a press conference Tuesday, Abbott also announced salons and other beauty businesses could reopen Friday. Abbott’s announcements were signals for the wider business community to begin considering reopening strategies and also legal questions few have encountered.

As Texas and other states reopen, business lobbyists and executives urged the Trump administration and Congress to shield American companies from a wide range of potential lawsuits, according to reports.

“Imagine you are a businessman thinking about reopening, and you’ve heard that trial lawyers all over the country are sharpening their pencils getting ready to sue you claiming that you didn’t engage in proper distancing or other issues related to health and safety,” McConnell said. “Look, we can’t pass another bill unless we have liability protection.”

Few legal precedents exist for employers during pandemics, leaving employees to make tough decisions and companies to sort out such questions of how long employees should be allowed to work remotely. And if their job requires them to be on the premises, what happens if they contract the virus and blame their employers?

Ultimately, employees aren’t protected from being fired if they choose to stay home because of fears of the coronavirus, said Cisco Gamez, spokesman for the Texas Workforce Commission.

How much time employers grant their employees to stay home is up to the two parties to decide, he said.

Typically, people are disqualified for unemployment benefits if they turn down work, Gamez said. But if employees refuse to return to their job, they might still be able to claim unemployment benefits if they fall under certain categories, such as being 65 years old or older, being in a 14-day quarantine period after COVID-19 exposure or not being able to find child care, Gamez said.

Management at American National Insurance Co. will work individually with employees who might still have concerns about returning to a physical work environment, President and CEO James E. Pozzi said.

“It’s going to be a case-by-case basis,” Pozzi said. “Eventually, we would expect everyone to be back in the office.”

American National employs about 900 people at a high-building in Galveston’s downtown and 650 in League City.

Employers and employees should focus on cooperation and communication, said Steve Shardonofsky, a partner and labor & employment chair of the Houston office of Seyfarth law firm.

If employees are concerned about returning to work, the employer must make reasonable accommodations, Shardonofsky said.

“Employers have an obligation to provide a safe workspace to employees,” Shardonofsky said.

Those accommodations could include modifying the work station, staggering work shifts, putting up dividers or cleaning more often, Shardonofsky said.

Those changes largely will depend on the workspace, he said.

Employees should consider returning to work initially and documenting the specific conditions that make them feel unsafe, said Bill Beardall, a clinical professor of law at the University of Texas School of Law and executive director of the Equal Justice Center.

If people have a special vulnerability such as a compromised immune system or if they have a known or suspected exposure to the coronavirus, they should try to put such concerns in writing, Beardall said.

“Employees that are returning to work under conditions they think are unsafe should be careful to document the problems, including taking pictures with their phones,” Beardall said.

Teaming up with at least one other coworker who’s concerned about the same conditions is better because groups complaining about working conditions have protections, Beardall said.

MANY EAGER TO WORK

Most people who returned to work at Rocky Mountain Chocolate Factory, 2225 Strand, wanted to be there, franchise owner Demas Caravageli said.

The chocolate shop reopened for curbside pick-up April 10 and opened its doors with social distancing measures in effect Saturday, he said.

One of his employees chose to remain at home because he’s taking care of his older mother, he said.

Caravageli is working with his employees to give them the time they need, he said.

“Anybody that left here because of COVID-19 has a job,” Caravageli said.

Many people are eager to work, said Patricia Wilson, a professor of law at Baylor University in Waco. Wilson focuses on employment relations and labor law.

But for people who don’t want to go back, the choice is tough, she said.

“It puts employees clearly in a catch-22,” Wilson said. “They’re not working. They’re not getting paid. It’s not going to be an easy choice.”

And how employers will be liable if employees contract the coronavirus while on the job, or whether employees would even know where they contracted it, is still unclear, Wilson said.

And some don't want to return because they are making more sitting at home on unemployment than they would be working because of that extra $600 being given by the federal government. They'll want to go back to work after that ends on July 31.

There were no non essential jobs. All jobs are essential to the employees and the economy. Get it open Abbott. Texas and America need people working.

Do you have proof of that claim Lisa, or are you just making a personal comment?