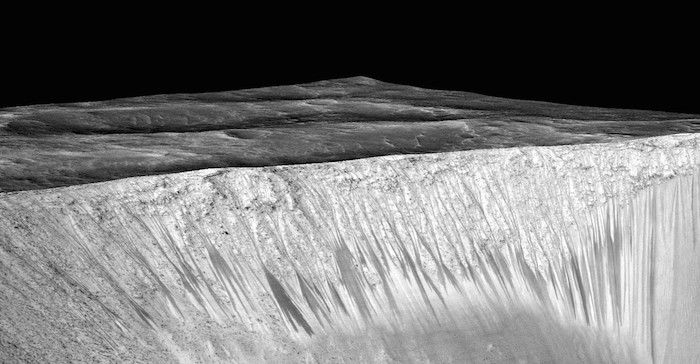 Dark narrow streaks called recurring slope lineae emanating out of the walls of Garni crater on Mars. The dark streaks here are up to few hundred meters in length. They are hypothesized to be formed by flow of briny liquid water on Mars. The image is produced by draping an orthorectified (RED) image (ESP_031059_1685) on a Digital Terrain Model (DTM) of the same site produced by High Resolution Imaging Science Experiment (University of Arizona). Vertical exaggeration is 1.5. 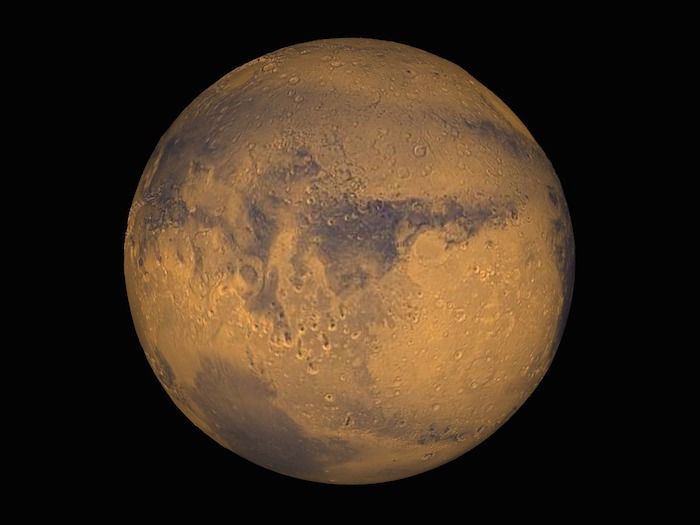 These dark, narrow, 100 meter-long streaks called recurring slope lineae flowing downhill on Mars are inferred to have been formed by contemporary flowing water. Recently, planetary scientists detected hydrated salts on these slopes at Hale crater, corroborating their original hypothesis that the streaks are indeed formed by liquid water. The blue color seen upslope of the dark streaks are thought not to be related to their formation, but instead are from the presence of the mineral pyroxene. The image is produced by draping an orthorectified (Infrared-Red-Blue/Green(IRB)) false color image (ESP_030570_1440) on a Digital Terrain Model (DTM) of the same site produced by High Resolution Imaging Science Experiment (University of Arizona). Vertical exaggeration is 1.5.

NASA/JPL/University of Arizona
1 of 2

Dark narrow streaks called recurring slope lineae emanating out of the walls of Garni crater on Mars. The dark streaks here are up to few hundred meters in length. They are hypothesized to be formed by flow of briny liquid water on Mars. The image is produced by draping an orthorectified (RED) image (ESP_031059_1685) on a Digital Terrain Model (DTM) of the same site produced by High Resolution Imaging Science Experiment (University of Arizona). Vertical exaggeration is 1.5.

planet appears to have flowing water

Several small streams of salty water are found along the slopes of craters on Mars, NASA officials and scientists announced Monday. The finding, based on data from NASA’s Mars Reconnaissance Orbiter, is the strongest evidence that liquid water can be found on the red planet.

“Mars is not the dry, arid planet that we thought of in the past,” said NASA’s Director of Planetary Science Jim Green. “Under certain circumstances liquid water has been found on Mars.”

Scientists said that during the spring and summer periods on Mars, evidence shows that water flows down streams that are at least 300 feet long and up to 15 feet wide. The source of the water is unknown, scientists said.

The water could come from a source just under the surface, which could be a result of melting ice or water vapor from the planet’s thin atmosphere. More missions to Mars are needed to confirm the water source, researchers said during the press briefing Monday morning.

An imaging tool aboard the Mars Reconnaissance Orbiter was used to confirm the water flow by using light waves. The seasonal dark steaks, found especially during the Martian summer, strongly suggest the existence of water.

Lujendra Ojha a Ph.D. candidate at the Georgia Institute of Technology at Georgia Tech University in Atlanta is the lead author of the research paper that detailed the findings in the journal Nature Geoscience. The findings were published Monday. He first discovered the streaks in 2011 as an undergraduate student at the University of Arizona.

Another instrument on board the Mars Reconnaissance Orbiter detected hydrated salts in four regions on Mars, Ojha said.

Scientists have been pretty certain water existed on Mars. In 2008 scientists confirmed frozen water on the polar caps of the planet.

Evidence also shows a “significant volume” of water exists on Mars, said University of Arizona’s Alfred McEwen, who is a scientist for the Mars Reconnaissance Orbiter. It isn’t standing water that would form lakes on the Mars surface. The findings indicate thin layers of wet soil, he said.

“It suggests that it would be possible for there to be life today on Mars,” said NASA’s science mission director, John Grunsfeld.

Liquid water is essential to life, so the findings announced indicate that the odds of life on Mars are very high, McEwen said. That life is likely tiny microbes that exist under the crust of Mars, he added.

As NASA works on possible manned missions to Mars by 2030, it could make life easier for astronauts to visit or live on the planet.

Water could be used for drinking and creating oxygen. The oxygen and other resources on Mars could be used to even produce rocket fuel.

The “water on Mars,” announcement reignited the imagination of scientists and educators alike.

Daniel Newmyer, the director of education for Space Center Houston, hopes that the discovery will help ignite the passion of the future astronauts, engineers and scientists who will work on manned missions to Mars. Space Center Houston’s education programs are already focused on NASA’s Mars efforts, he said.

“Our educational center uses the excitement and energy around space exploration to engage students in science and other skills that prepare them to be the workforce of the future,” Newmyer said. “The children we teach and inspire today could be among the first humans who will walk on Mars.”

The nonprofit organization already teaches students about space exploration and how to live in habitats on other worlds.

Ravi Prakash, a Texas City native who was a team member with NASA’s Curiosity Mars rover, said the findings should reinvigorate the discussion about exploration.

“To me it reinvigorates why we do these things and why we explore,” he said. “We are trying to answer the questions people have had forever.

What else is out there?

“We are one step closer to answering the question, is there life on Mars and other (planets).”

Animation of Site of Seasonal Flows in Hale Crater, Mars

You can watch the announcement live by clicking here: NASA Mars Mystery solved.

This old East Texas Piney Woods denizen is confused at this point (again...)....

Can one of you science guys out there clear this up for me??
Thanks....

Now, the presence of an operable cold Diet Coke machine on Mars would really be news,,,,,

You are correct, George. The story wasn't very clear as to what confirmed the presence of water on Mars. Apparently it is the residual streaks left on the sides of craters after the water flowed out from underground and down the sides of some craters, but is that confirmation? Maybe they did some spectroscopic analysis of those streaks.

Does anybody know whatever happened to those Martian canals? Years ago some astronomers were certain that there were canals on Mars. I remember when I was a kid the canals were mentioned on Walt Disney's Tomorrow Land on Sunday nights in the mid1950's.

Maybe they were a Martian government project. They dug the canals, but then filled them back in when they discovered they were out of water. [smile]

Yet another case of 'not shovel ready'... [innocent]

Within the realm of factual information however, I am pleased to see statements from a fairly recent TCISD graduate Ravi Prakash (Texas City High School Class of 1998) who worked in the Mars project. Ravi's many achievements had him become a 2014 member of the TCISD Hall of Honor.

The TCISD Hall of Honor is designed to recognize Texas City graduates who have excelled in their field of expertise and made significant contributions to their respective communities, the Hall of Honor serves as recognition and honors these individuals.

I watched/read several stories on this from multiple sources and note that while most said the presence of liquid water on Mars was confirmed, a couple still said it was hypothesized (actually, they said all evidence points to liquid water, but would not definitively say it was so concluded) ......

OK.
I'm going for the optimistic side and treating it like the Easter Bunny and assuming it's real until such time as my belief system is shattered again....

I think that it's a good bet that water exists on Mars other than at the polar ice caps. I guess one way of looking at it is that we don't really "know" until we make actual contact with these areas and conduct on - the - spot analysis.

Science tells us that water is essential for life, as we know life on this planet anyway. That is a correlation but not a cause and effect. I do not think that any scientist is ready to say that where there is water there is life and where there is not water there is not life. It may be a good bet as we understand the universe now, but it is no where near a certainty. But, in my opinion definitely worth pursuing.