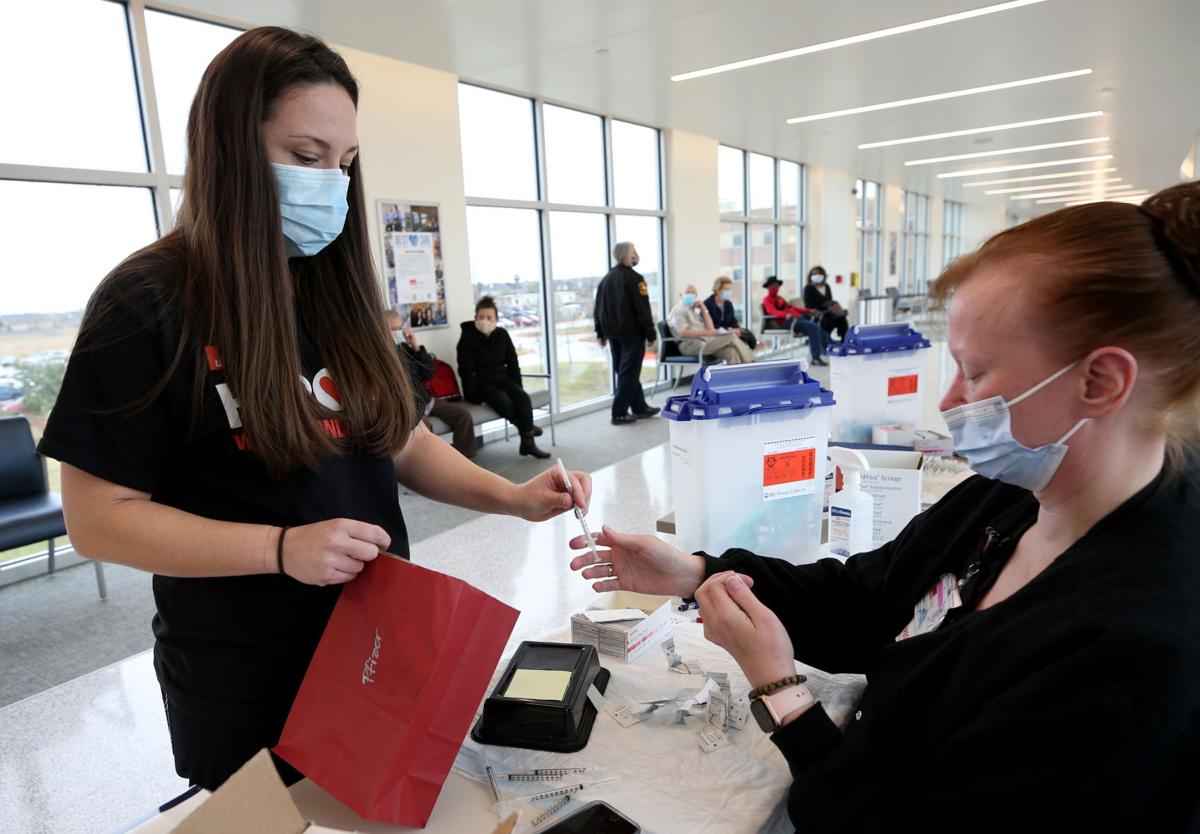 Kathryn Davis, left, a nurse manager at the University of Texas Medical Branch, gets pre-filled syringes of Pfizer’s COVID-19 vaccine from Jenifer West during a vaccine clinic at the medical branch’s League City campus on Friday, Feb. 5, 2021. 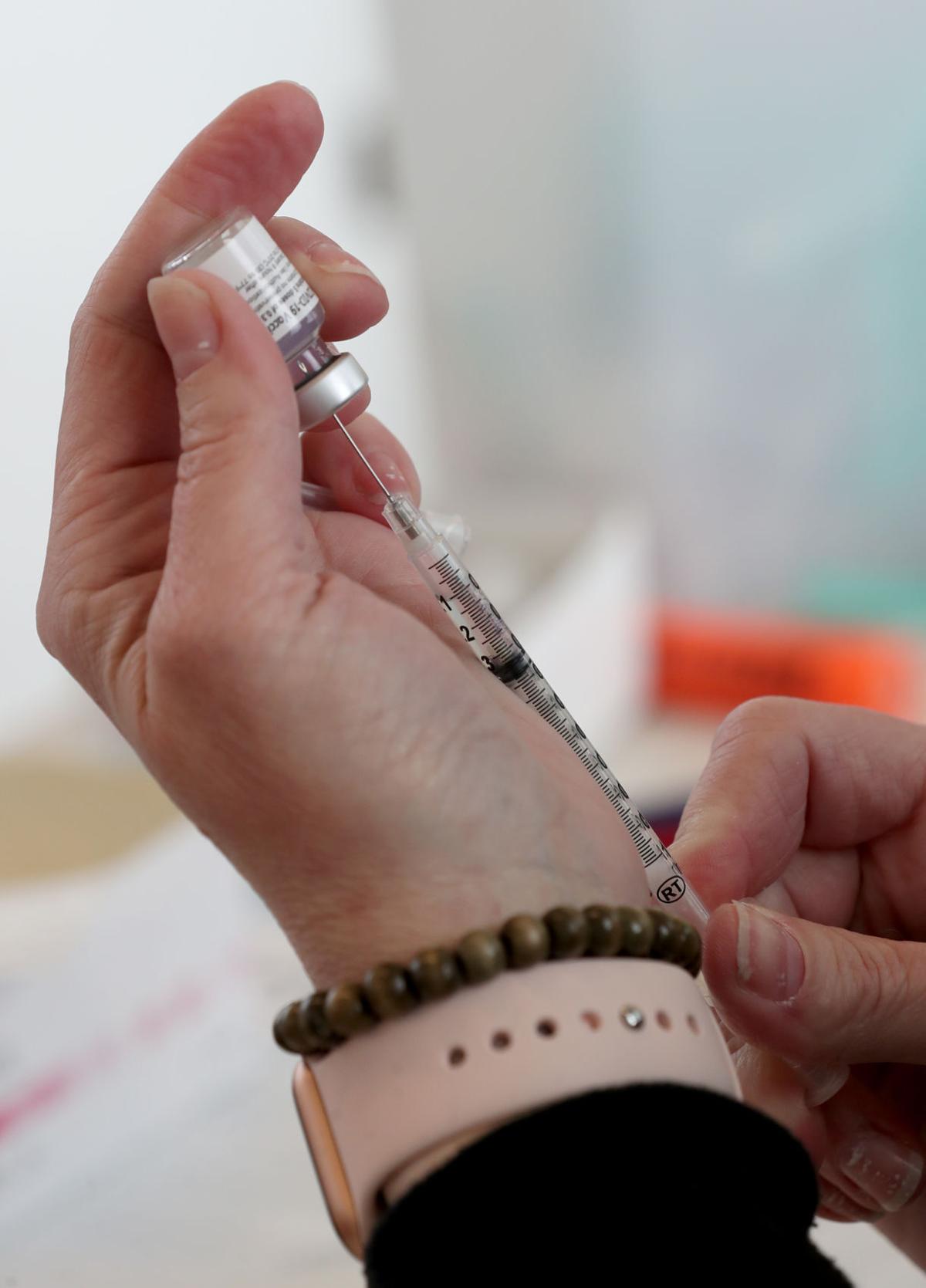 Jenifer West, a registered nurse with the University of Texas Medical Branch, fills a syringe with Pfizer’s COVID-19 vaccine during a vaccine clinic at the medical branch’s League City campus on Friday, Feb. 5, 2021.

Kathryn Davis, left, a nurse manager at the University of Texas Medical Branch, gets pre-filled syringes of Pfizer’s COVID-19 vaccine from Jenifer West during a vaccine clinic at the medical branch’s League City campus on Friday, Feb. 5, 2021.

Jenifer West, a registered nurse with the University of Texas Medical Branch, fills a syringe with Pfizer’s COVID-19 vaccine during a vaccine clinic at the medical branch’s League City campus on Friday, Feb. 5, 2021.

Hair loss is the most outlandish vaccine myth Katie Davis has heard so far as a COVID-19 vaccinator, she said.

Davis, a nurse manager at University of Texas Medical Branch at Galveston, said she didn’t know how to respond to patients concerned about post-inoculation baldness.

Although that one was remarkable, hearing worries about the COVID-19 vaccine is common for Davis and other vaccinators.

Along with managing the complex work of delivering vaccines to more than 300,000 people, give or take, in the county, health officials also are working to identify and address worries and myths that might keep people from being inoculated.

There are many, and some of the most common are that COVID vaccines cause the flu, that one vaccine is better than the other and that neither of the vaccines is effective.

Davis has mostly heard criticism about the vaccines’ composition and concerns the vaccines cause the flu, she said.

“The vaccine is not a live virus,” she said. “We are not injecting COVID-19 into people.”

The mRNA in the vaccines is a synthetic copy of SARS-CoV-2’s mRNA, the virus that causes COVID-19, and not the actual virus, according to the medical branch.

Health workers injecting people with actual COVID-19 is the most ridiculous myth Galveston resident Antrese Singleton heard, she said. She didn’t feel any side effects after receiving either of her shots, she added.

Singleton, who heard more negative than positive information about the vaccines, wasn’t worried about being inoculated, she said. She was ready for it after she and her husband recovered from COVID-19 and her mother died from COVID-19-related issues.

“There wasn’t a doubt I would take it,” Singleton said. “COVID-19 showed me I wanted whatever is out there to get rid of this thing.”

Another concern is a belief one brand of vaccine is more effective than another, Davis said. She has had patients cancel appointments because they couldn’t get a Pfizer or Moderna vaccine they initially wanted, she added.

Both vaccines are authorized and recommended by the U.S. Centers for Disease Control and Prevention. The main difference between the Moderna and Pfizer COVID-19 vaccines is Pfizer is stored at a colder temperature than Moderna, said Bethany Gomez, medical assistant at the medical branch.

“Some people think the vaccine was rushed,” she said. “They think scientists didn’t study it well enough or do enough trials.”

Moderna proved to be 94.1 percent effective in its clinical trials and Pfizer 95 percent, according to the CDC.

Seabrook resident Carlesha Johnson still feels great a month after taking her second vaccine shot on Jan. 8, she said. The only side effect she felt was soreness in her arm after the first shot, she said.

Some myths she’d heard before taking the vaccine were that it was a cure, that scientists tested it on front-line workers and that billionaire Bill Gates, co-founder of MicroSoft Corp. wanted to use vaccines to implant microchips in people, she said.

But Johnson was more worried about her and her children catching COVID-19 than the vaccine myths, she said. She was wary of the vaccines’ side effects but felt more confident after speaking with her doctor, she said.

Some patients think they don’t need the COVID-19 vaccine or say they’d rather become immune by contracting the virus, said Dr. Megan Berman, associate professor of internal medicine at the medical branch.

The more common side effects of the vaccines are soreness and fatigue, Davis said. Reactions to the vaccine rarely are severe enough to put patients in the hospital but can make them feel nauseated.

But, overall, the whole vaccination experience has been positive for patients, she said.

“The overwhelming majority of people are excited about getting the vaccine,” Davis said. “They’re excited to think about what they’re going to do after they get it.”

1 in 20 people in Galveston County is vaccinated

"We can handle more," Galveston County Judge Mark Henry said of the county's ability to get people vaccinated.

The first public vaccination clinic in Galveston aimed to inoculate the city's most vulnerable groups.

Myer joined The Daily News in later 2020 after previously working at our sister newspaper the Del Rio News-Herald.

To take an experimental biological agent without fully understanding the side effects is not indicated for a disease that has a 0.5% morbidity rate. I personally will get a supply of hydroxychloroquine on hand in case of infection. In fact, if the population would all take their 'Sunday pill' this thing would go away.

Robert: Do you know the side effects of hydroxychloroquine? Given no evidence it works at all in treating Covid19, you might consider there are serious side effects that make it a very poor choice.

No serious side effects! It has been used for YEARS in the successful treatment of Malaria. Our own Dr. Robin Armstrong was credited for saving a lot of lives at the nursing home in Texas City, by using it months ago. It is inexpensive. You can get it through WebMD. In fact, you can get it at almost all Feed Stores. Don't forget the Ivermectin while you are at it!

My niece takes Hydroxychloroquine because she has lupus. She has to be on watch for the following side effects.

HCQ has been in use for over 65 years. It is common in Malaria prone areas and the people call it their "sunday pill". The media hype around the dangers and ineffectiveness of this drug has been largely lies and exxagerations.

I was going to make a comment about how hard it will be to "dispel COVID vaccine myths, concerns", but Robert made it for me.

What’s nota myth is having your mask cover your nose.