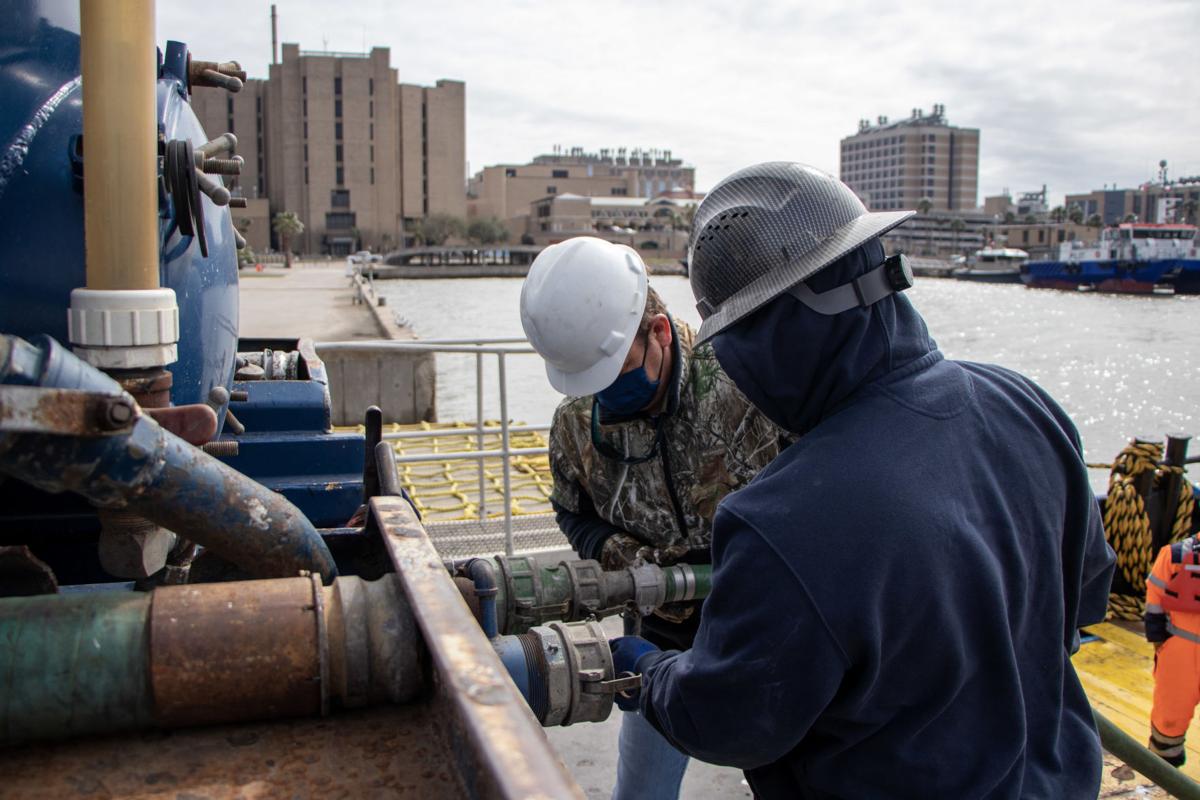 Earl Galloway, left, of Harbor Offshore, and Ryan Riley, a driver with Curtis & Son Companies, prepare to transfer water from the Sir Gawain, an offshore utility vessel, to a tanker truck to provide water to the University of Texas Medical Branch on Thursday, Feb. 18, 2021. Harbor Offshore helped provide water to the medical branch by using its delivery ships, which usually haul water and other essential items to offshore oil rigs, among other locations. 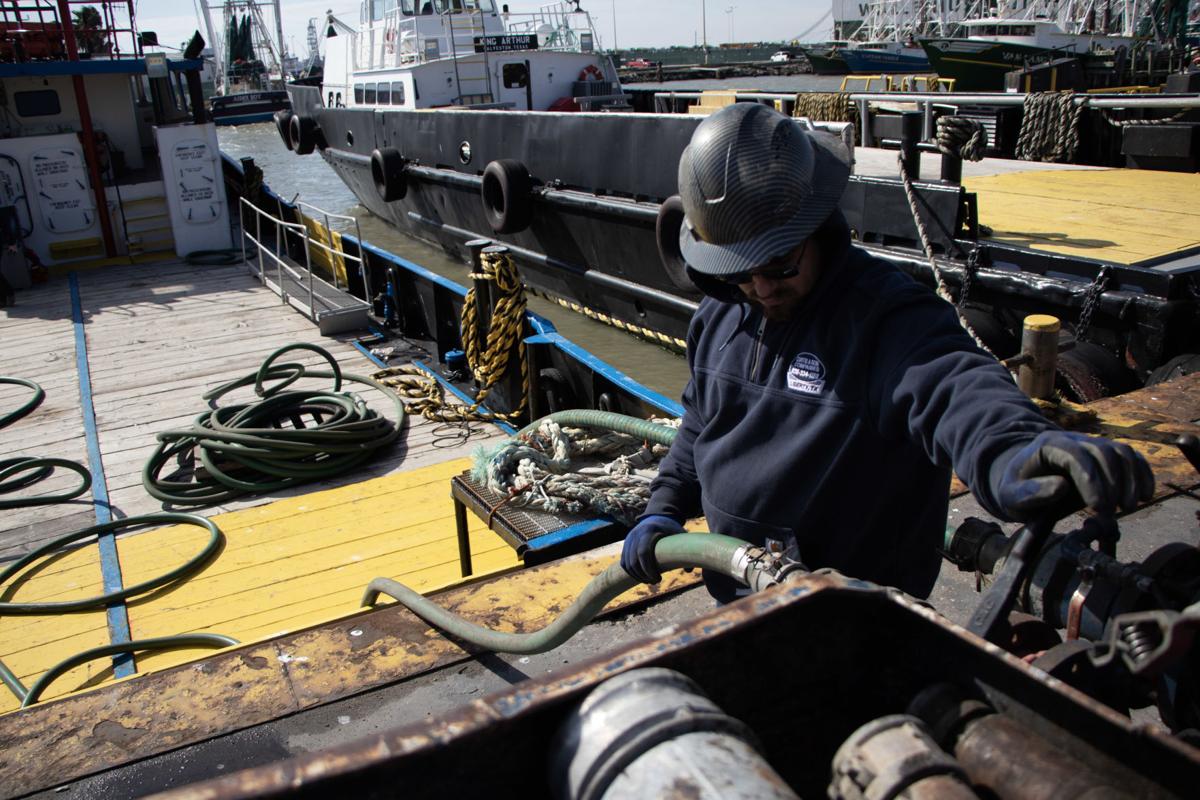 Ryan Riley, a driver with Curtis & Son Cos., transfers water from the Sir Gawain, an offshore utility boat, to a tanker truck to help provide water to the University of Texas Medical Branch in Galveston on Thursday, Feb. 18, 2021. Harbor Offshore helped provide water to the medical branch by using its delivery ships, which usually ferry water and other essential items to offshore oil rigs, among other locations.

Earl Galloway, left, of Harbor Offshore, and Ryan Riley, a driver with Curtis & Son Companies, prepare to transfer water from the Sir Gawain, an offshore utility vessel, to a tanker truck to provide water to the University of Texas Medical Branch on Thursday, Feb. 18, 2021. Harbor Offshore helped provide water to the medical branch by using its delivery ships, which usually haul water and other essential items to offshore oil rigs, among other locations.

Ryan Riley, a driver with Curtis & Son Cos., transfers water from the Sir Gawain, an offshore utility boat, to a tanker truck to help provide water to the University of Texas Medical Branch in Galveston on Thursday, Feb. 18, 2021. Harbor Offshore helped provide water to the medical branch by using its delivery ships, which usually ferry water and other essential items to offshore oil rigs, among other locations.

When the water went off Tuesday evening, it was another inconvenience and a blow to the spirits of many islanders who had already been without power for nearly two days.

At the University of Texas Medical Branch, the shut-off was an existential threat to more than 600 patients being treated at the island campus.

When the thaw began after a hard, lingering freeze had enveloped most of Texas beginning early Monday, water systems across the county were riddled with breaks and probably contaminated with bacteria. Most suppliers such as cities warned against consuming water without boiling it first.

It’s not used just for drinking and bathing. In the hospital buildings, water powers the heat. It’s used to sterilize instruments and to put out fires. Without water, a hospital is nothing, he said.

And at 10 p.m. Tuesday, the medical branch was nothing.

“I immediately knew that we had a huge problem,” LeBlanc said.

After an emergency meeting at 4 a.m. Monday, a team led by LeBlanc began coordinating with the city to fast-track limited supplies coming across the causeway from the Gulf Coast Water Authority to the pump station on 30th Street and then farther east on the island to the medical branch campus.

“They sent out crews through the night to direct the water to us, so that we could at least keep things running,” LeBlanc said. “The diversion, the direction to the east of the island was being done. It seemed like it took forever.”

As crews were trying to restore water service, a group of planners at the hospital were trying to evacuate 600 patients, as well as research animals, off the island to other facilities, LeBlanc said. A group of dialysis patients, whose treatment requires water, were taken to the medical branch’s League City campus, officials said.

For much of the day, both plans — restoration and evacuation — were at even odds for happening, LeBlanc said.

“We were basically in a race,” LeBlanc said. “The race was: Can we get the water restored before we’re forced to evacuate the hospital?”

At about 4 p.m. Wednesday, restoration won out.

Still, life on Thursday wasn’t back to normal at the medical branch’s hospitals. Teams were going to water sources to install filters, and patients were prevented from showering and instead had to use sanitary wipes to bathe.

Hand-washing stations were being filled from the medical branch’s emergency supply of 800 crates of bottled water. The medical branch received shipments of water from Harbor Offshore, which normally supplies potable water to ships offshore. The delivery arrived via boat to a dock on the Galveston Ship Channel just north of the campus.

LeBlanc, who was Galveston’s city manager in 2008 during Hurricane Ike, said the only thing the winter storm could be compared to was, indeed, a hurricane.

“I’ve never seen a situation quite like this,” LeBlanc said. “But what it is close to is a hurricane. This is very similar in the sense that in a hurricane, you lose power, you lose water, you don’t have services. If the water was not restored, we would have been moving patients.”

The medical branch wasn’t alone in resorting to extraordinary measures to deal with the water shortages.

Texas A&M University at Galveston was transferring water from the campus pool to the purification system on the General Rudder, the college’s maritime training ship, to create a back-up supply of water that was safe to drink.

At the Galveston County Jail, inmates were required to relieve themselves in hazardous material bags because the facility’s pressure-dependent toilets wouldn’t flush.

The last time the jail resorted to using bags for toilets was during Hurricane Ike, Galveston County Sheriff Henry Trochesset said. Trochesset had been in talks with judges and attorneys about reducing the jail population because of the unsanitary conditions, he said.

“All options” had been on the table, he said.

There were 950 people being held in the jail on Thursday. At least 50 were jailed on misdemeanor pretrial holds, which usually carry low bond amounts for non-violent crimes.

Elsewhere around the county, residents reported raiding their supplies of bottled water normally saved for hurricanes to get them through the shortage and subsequent boil warning. Most retailers Thursday had run out of water.

There were varying reports of water problems around the county Thursday. In some places, pressure had returned to near normal, while other places still reported little or no pressure.

Galveston’s director of municipal utilities said it could be as many as four days before the city crews were be able to stabilize the city’s water supply. Crews were going through the city block by block, opening water lines and then repairing leaks.

Meanwhile, emergency response officials were trying to bring temporary relief to residents who were endangered or inconvenienced by the water outages. The city received a shipment of portable toilets and stationed them in more than two dozen spots around the city.

City and county officials also said they were expecting a plane carrying an emergency shipment of bottled water to Scholes Airport in Galveston, and were planning to announce distribution sites on Thursday evening. However, late Thursday afternoon, officials confirmed the plane wouldn’t arrive that day.

Another example of failed city and state administrations. This is the USA for God’s sake and we can’t even build in protection into our main infrastructure such as water & electric delivery during a winter storm? Texas or otherwise we should expect the unexpected and be prepared for it. But instead, we are only reactive. Unacceptable at all levels. City and State administrations should be held accountable for this debacle. This would never happen in municipalities up north. Hopefully we have learned form this and rebuild our crucial utility delivery systems to withstand a winter storm.

As if we didn’t have enough to worry about with covid 19 and it’s variants, states relaxing restrictions too soon, and many states not requiring masks at all, we have stupidity rein over the last decade resulting in no heat or water available to wash hands, and decisions must be made to go to warming centers or hotels that put a financial strain and risk covid so the children and elderly don’t freeze to death.

Each resident of Texas needs to do the same analysis in their home environment because leadership has not shown reliability in this area.

Each resident also needs to evaluate leadership qualities in 2022 and vote for the best candidate to address our problems because the life of your loved ones may very well depend upon it.