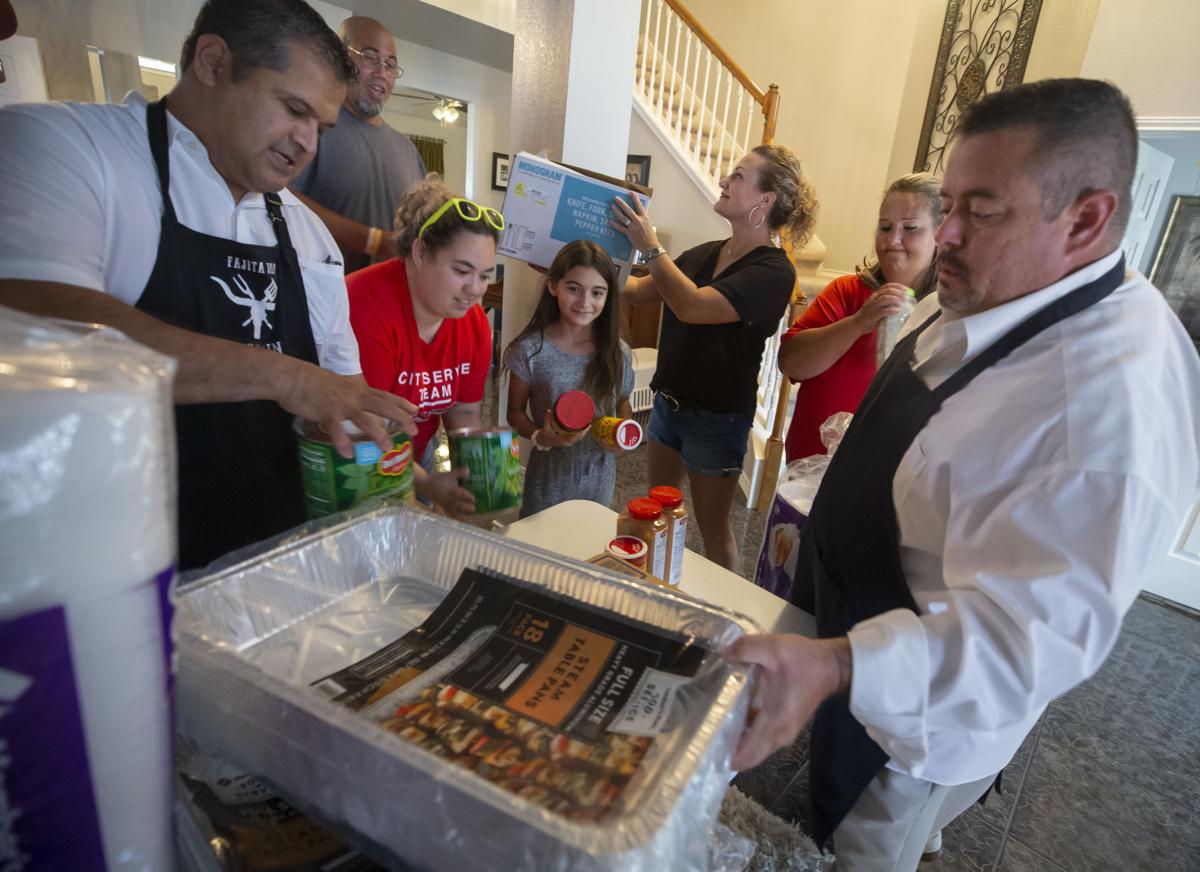 Volunteers, from left, Juan Rodriguez, Sean Broussard, Megan Morales, Eva Ruiz, Tiffany Ruiz, Sarah Broussard and Steve Ruiz look through supplies they will use to make and distribute meals to the victims of Hurricane Laura in the Beaumont-Port Arthur area. 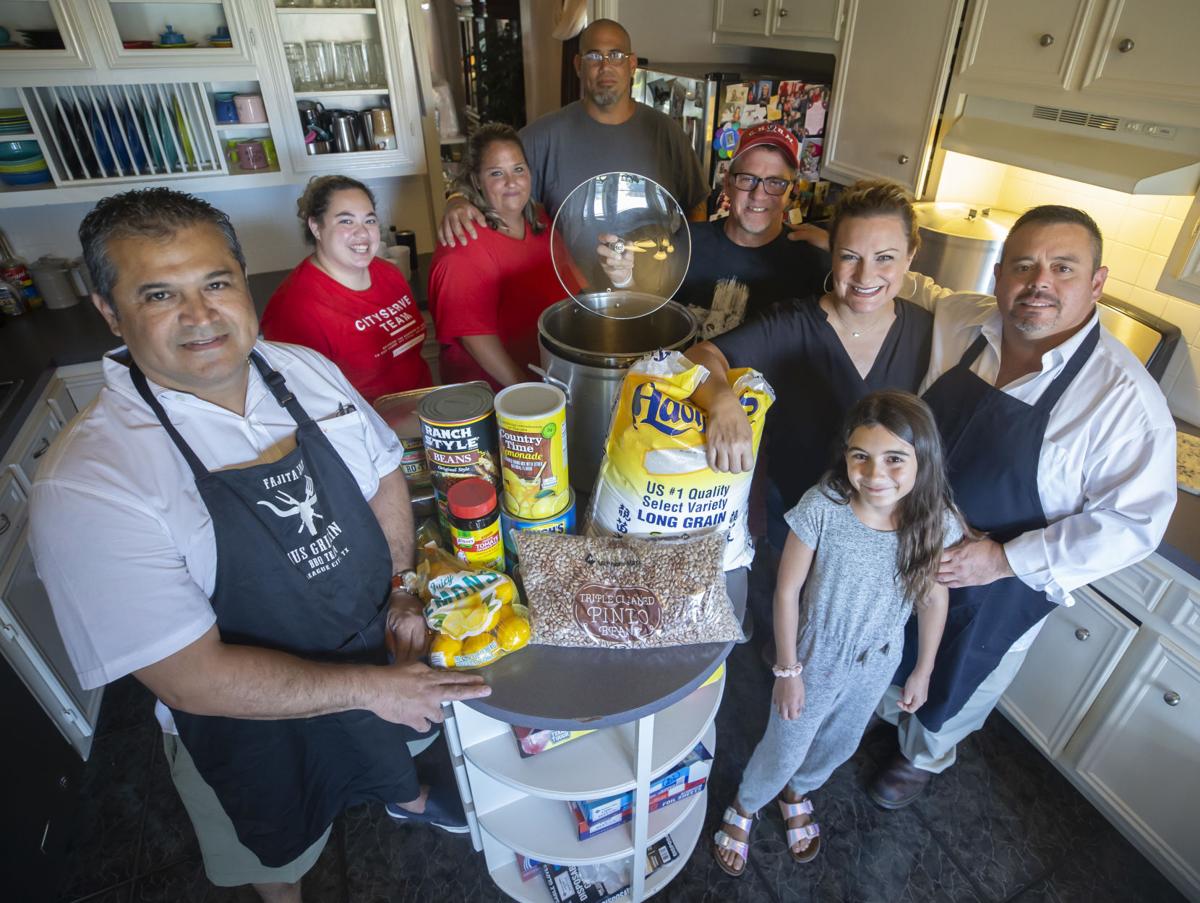 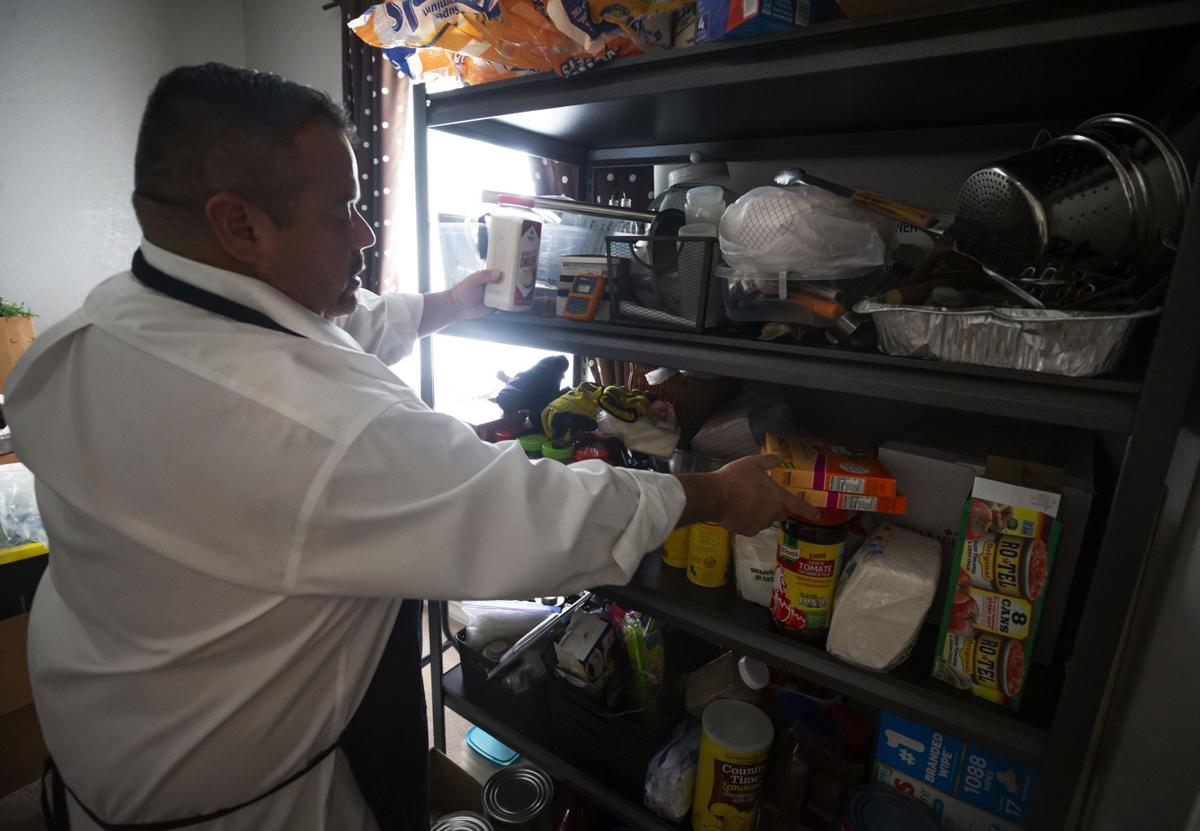 League City resident Steve Ruiz sorts through food items that he and other volunteers will use to make meals for Hurricane Laura victims in the Beaumont-Port Arthur area.

Volunteers, from left, Juan Rodriguez, Sean Broussard, Megan Morales, Eva Ruiz, Tiffany Ruiz, Sarah Broussard and Steve Ruiz look through supplies they will use to make and distribute meals to the victims of Hurricane Laura in the Beaumont-Port Arthur area.

League City resident Steve Ruiz sorts through food items that he and other volunteers will use to make meals for Hurricane Laura victims in the Beaumont-Port Arthur area.

When Hurricane Laura made the turn on Thursday and barreled toward the Louisiana Coast, scores of Galveston County residents couldn’t help but think about the Cajun Navy.

The Cajun Navy, and volunteer groups like it, headed this way after Hurricane Harvey struck the region in late 2017, bringing boats, water, food and other supplies to help those in communities where the storm dropped 50 inches of rain on some parts of Galveston County, flooding more than 20,000 homes.

“I really feel for the folks, family, people and strangers to the east of us,” Dickinson resident Darlene Powell said. “They so generously helped us out during our time of need three years ago today.”

Officials at police and emergency departments across Galveston County on Thursday said they stood ready to help people near Port Arthur and across the border in Louisiana, but that thus far the call hadn’t been made.

“In the past, the League City Police Department has assisted other agencies when needed following devastating hurricanes,” Detective John Griffith, spokesman for the League City Police Department, said. “LCPD went to New Orleans after Hurricane Katrina, Port Arthur after Rita and assisted Seabrook following Ike. If other cities request our help, we will do our best to assist as we can. At this time, there have been no requests for assistance.”

Galveston officials reached out to some cities affected by the storm and they have plenty of help right now, Fire Chief Charles Olsen said.

Still, some local volunteers aren’t waiting to be asked.

“To be completely honest, I think they were probably overwhelmed today,” Texas City resident Jay Carnes said of Louisiana officials. “There was just so much damage.”

Louisiana took the brunt of the damage when Hurricane Laura came ashore as a Category 4 system and barreled over Lake Charles, an industrial and casino city of 80,000 people, according to The Associated Press. Laura’s powerful gusts blew out windows in tall buildings and tossed around glass and debris. Police spotted a floating casino that came unmoored and hit a bridge.

At least six people died in the storm, according to The Associated Press.

Carnes is a storm chaser in his free time, and spent the night Wednesday hunkered down in Lake Charles before venturing out to survey the aftermath.

“It’s one of the worst I’ve seen,” he said. “I was in Gulfport, Mississippi, and that was similar to this. Every structure has damage. And many, maybe the majority, had major damage.”

Galveston County residents, spared the brunt of Laura’s fury, on Thursday began formulating plans to pay back Louisiana and east Texas for the help they provided after Harvey.

“Right now, I’m just waiting to find a spot that will accept me,” said Steve Ruiz, a League City resident.

Ruiz spent Thursday shopping for groceries and planned to cook enough food for as many 300 people, he said.

“Just simple food — rice, beans, sausage and chicken,” he said. “I don’t have a license or anything, I’m just doing the best that I can out of my kitchen.”

Ruiz’s efforts had already gathered some 20 or 40 other people from the area to join in as well, he estimated.

That includes the likes of David Moore, of the Clear Lake area, who called The Daily News apart from Ruiz to ask whether anyone knew of other groups that could use an extra volunteer.

“I just want to head over, feed the first responders and anyone else that we come across in need of help,” Moore said.

‘SEE WHAT WE CAN DO’

Carnes recommended that anyone wanting to help out should focus on tree removal and take all the supplies they could conceivably need, he said.

“That includes even a full tank of gas,” he said. “There’s basically no electricity from the Louisiana border all the way to Lake Charles.”

Carnes filled four holes in his tires in four hours because there were so many nails on the road, he said.

Ruiz also fed volunteers during Harvey and has forged connections with several church groups in Texas and Louisiana he hopes to connect with to find out who needs help, he said.

“I think we have enough resources to do this until next Sunday, maybe seven to nine days straight,” he said.

Powell, meanwhile, told The Daily News she planned to spend Thursday calling her contacts to decide where to donate, she said. Powell’s son is in the competitive martial arts community and the family has gotten to know several others in the Louisiana area.

“I want to figure something out,” she said. “I’ve started storing cleaning supplies in the garage.”

Sarah Stokes, who co-owns Armstrong Plumbing Company in Tiki Island, and her family didn’t have any jobs for the weekend, so they planned to go see what help they could provide, whether cleaning or fixing things, she said.

The trip, however, will be relatively short-lived — the Stokes’ two children start school on Monday, she said.

“We’ll pick up trash when we see trash and, if we see someone thirsty, we’ll give them water,” she said. “We’ll just see what we can do.”