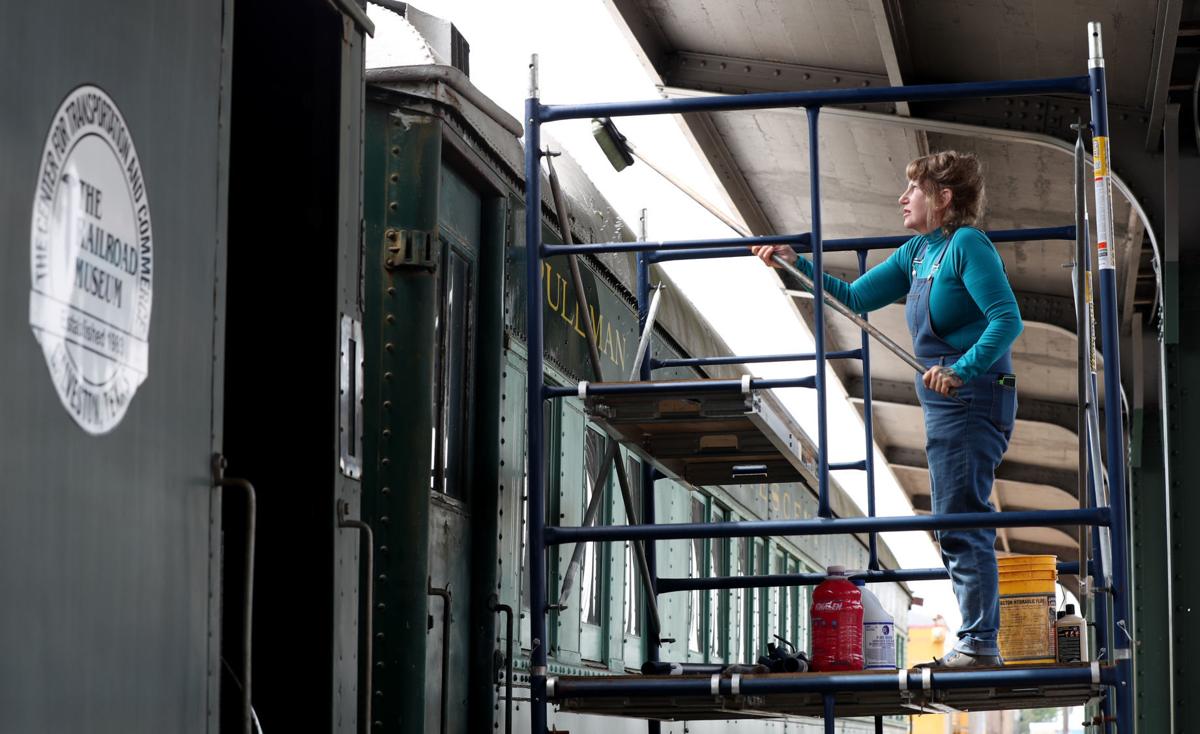 Kelly Carroll washes the exterior of a Pullman railroad car at the Galveston Railroad Museum on Friday, March 20, 2020. After Mayor Jim Yarbrough on Tuesday ordered bars, museums and tourist attractions to close, Carroll and the museum staff are using the time to make repairs and clean the rail cars and engines. 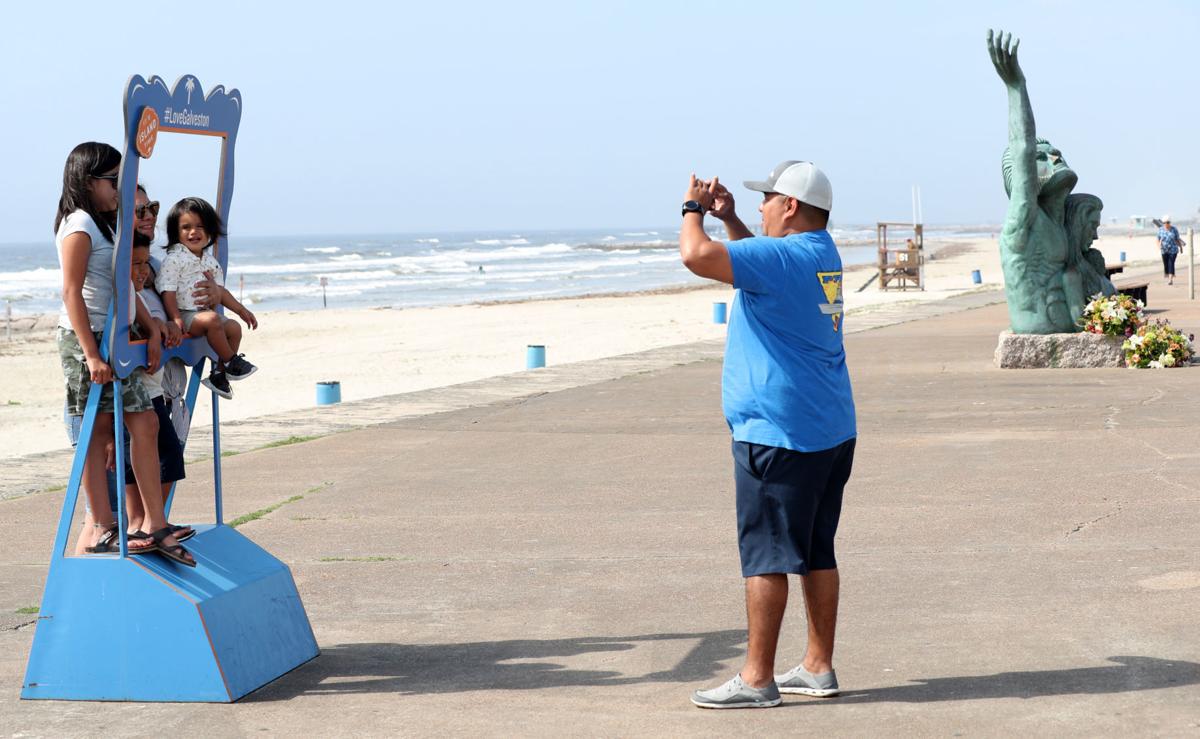 John Torres photographs his wife, Elvira, and their three children, Emily, Julian and Cristian, in one of the Galveston Island Park Board of Trustees’ #LoveGalveston photo frames on the seawall Friday, March 20, 2020. The family from Dallas was trying to make the best of their visit to the island, Torres said. “We got here a day late to visit the Pleasure Pier, but we’ve enjoyed the beaches,” he said. 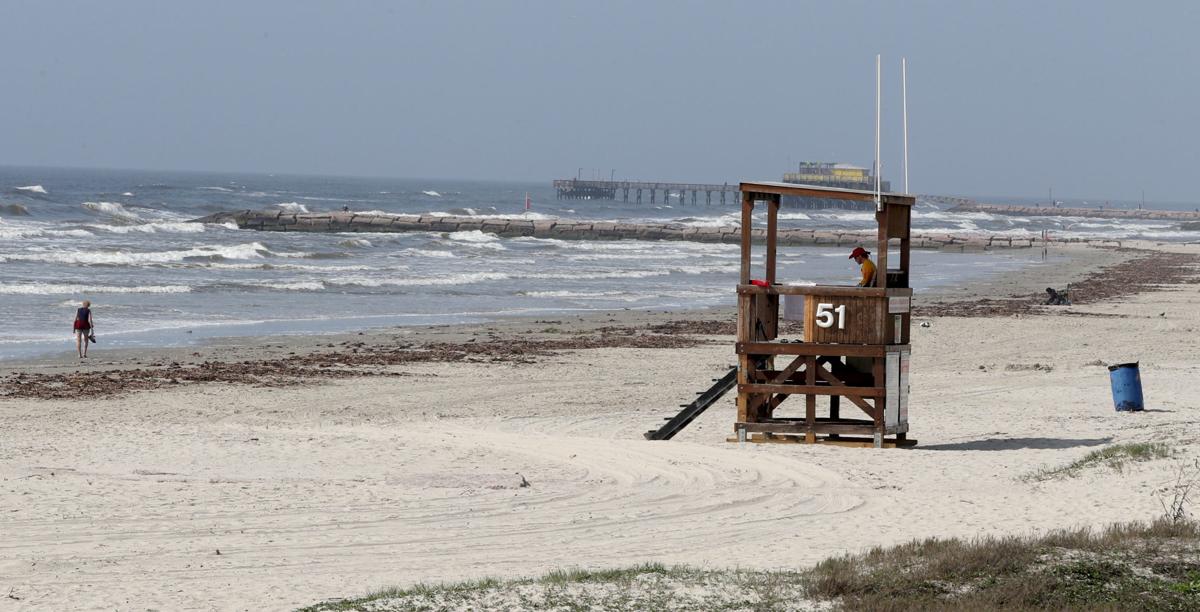 The beach near 51st Street in Galveston is nearly empty Friday, March 20, 2020. Bans on social gatherings and the closing of tourist attractions and museums has curtailed tourism during what is normally a busy time of year. 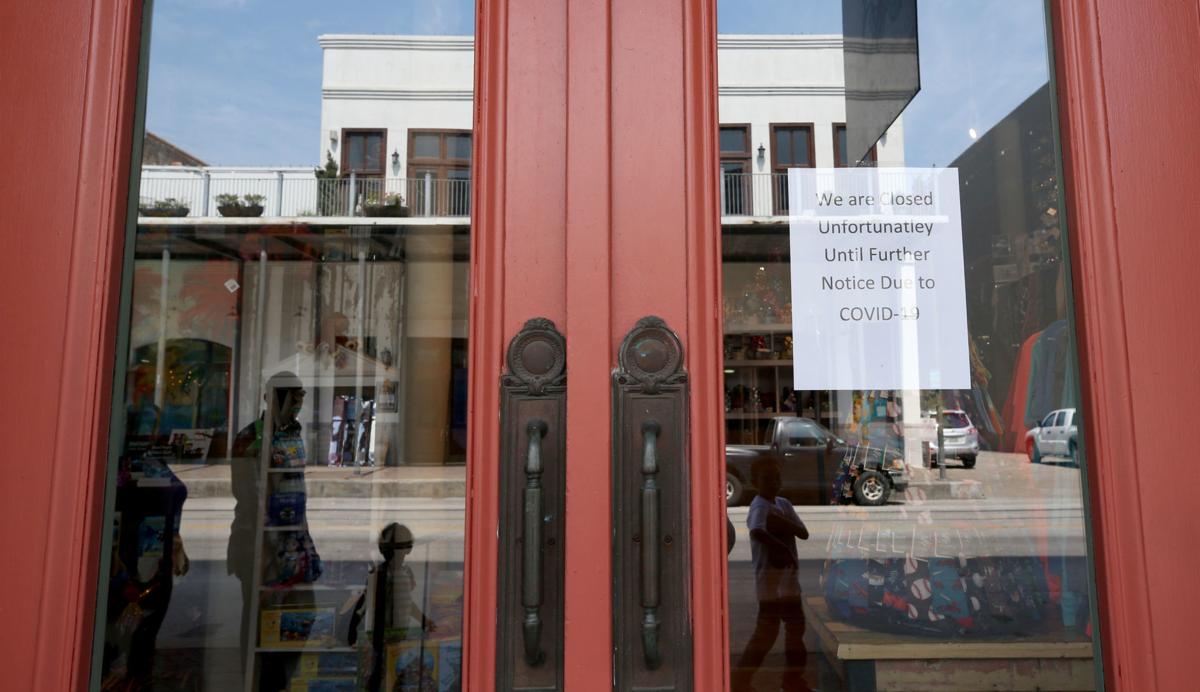 A sign on the doors of The Admiralty, 2221 Strand St. in Galveston, tells visitors the shop is closed due to the coronavirus pandemic on Thursday, March 19, 2020.

Kelly Carroll washes the exterior of a Pullman railroad car at the Galveston Railroad Museum on Friday, March 20, 2020. After Mayor Jim Yarbrough on Tuesday ordered bars, museums and tourist attractions to close, Carroll and the museum staff are using the time to make repairs and clean the rail cars and engines.

John Torres photographs his wife, Elvira, and their three children, Emily, Julian and Cristian, in one of the Galveston Island Park Board of Trustees’ #LoveGalveston photo frames on the seawall Friday, March 20, 2020. The family from Dallas was trying to make the best of their visit to the island, Torres said. “We got here a day late to visit the Pleasure Pier, but we’ve enjoyed the beaches,” he said.

The beach near 51st Street in Galveston is nearly empty Friday, March 20, 2020. Bans on social gatherings and the closing of tourist attractions and museums has curtailed tourism during what is normally a busy time of year.

A sign on the doors of The Admiralty, 2221 Strand St. in Galveston, tells visitors the shop is closed due to the coronavirus pandemic on Thursday, March 19, 2020.

City leaders last week ordered tourist attractions, museums and bars to close and restaurants to severely restrict operations to reduce the spread of coronavirus. The decree brought with it an undercurrent of fear that the indefinite shutdown could cause severe and lingering harm to an industry that attracts millions of visitors and pumps more than $1 billion into the island’s economy each year.

Mayor Jim Yarbrough signed the order Tuesday to close all bars and entertainment venues and limit restaurants to take-out and delivery only in an attempt to discourage thousands of people from visiting the island and raising the risk of infections.

Just days after Yarbrough made the politically painful call, Gov. Greg Abbott ordered the closing of bars and also restricted restaurant service across Texas, while closing schools as he anticipates tens of thousands could test positive for coronavirus throughout the state. Yarbrough’s and Abbott’s orders are in effect until at least April 3.

Although most attractions and museums seem ready to withstand a short-term closure, questions remain about how Galveston’s tourism sector could weather an indefinite national economic downturn and likely recession, which could discourage people from traveling or supporting museums, tourism official say.

There’s growing consensus among economic forecasters that the shock of the coronavirus outbreak will push the nation into a recession, ending the longest-ever economic expansion on record, according to reports.

It’s also questionable whether some small businesses that make up the underpinnings of the island’s tourism industry can survive an open-ended ban on social gatherings of 10 people or more as the city grapples with the hundreds of residents knocked out of employment.

About 7.2 million travelers visit Galveston each year, pumping in about $1.2 billion in tourism-related spending, according to Galveston Park Board of Trustees data.

Excluding hotel occupancy tax, tourism-based local tax revenues generated $26.6 million to the city in 2018, according to the data.

Detrimental effects on museums likely will extend past the day that they can reopen, said J.P. Bryan, founder of The Bryan Museum, 1315 21st St.

People who have lost their jobs or had to close their business aren’t going to pay to enter or support a museum, said Bryan, who made his fortune in oil and used it to preserve important historic buildings and history in Texas.

“What people don’t understand is this is not going to all return like instant mashed potatoes,” Bryan said.

The Bryan Museum will keep people on its payroll as long as possible, but that can’t go on indefinitely if the museum is closed, Bryan said, adding that he’s worried about the measures many governments are taking to close or limit bars, restaurants and entertainment venues, he said.

“Why did they pick museums?” Bryan said. “I don’t understand it.”

Only about 50 people a day visit the museum, and that’s over the course of many hours, Bryan said.

“There’s better ways we could be approaching this entire issue,” Bryan said. “This is going to destroy people’s lives if this goes on for very long.”

Never is there a welcome time for a pandemic, but this one hit during the crucial spring break week, said James Rosengren, executive director of the Galveston Railroad Museum, 2602 Santa Fe Place. Now, idle museum staffers are taking time to catch up on projects and check things off their to-do lists.

“In the short run, we are just shifting all of our maintenance and some of our restoration projects onto the front burner,” Rosengren said.

The museum hasn’t had to lay off employees yet because the staffing already is fairly lean, and it should be able to weather a downturn, Rosengren said. But the museum, to make up revenues, will have to persuade more people to become members as it seeks financial support, Rosengren said.

With bans on social gatherings larger than 10, the coronavirus has severely curtailed tourism, said Kelly de Schaun, executive director of the Galveston Park Board of Trustees, which promotes island tourism.

The decision to close attractions was a tough one but made in a time of crisis, de Schaun said.

“The hospitality industry in Galveston, and destinations around the globe, can expect to run in excess of 75 percent below normal levels,” de Schaun said. “Galveston is a resilient community that has soldiered through many storms, and we will do so again.”

Landry’s Inc., which operates the popular Galveston Island Historic Pleasure Pier, San Luis Resort & Spa and numerous restaurants and other hospitality properties, did not respond to requests for comment by deadline.

How far reaching the effects of the closures are will depend on how long they go on, said Dwayne Jones, executive director and CEO of the Galveston Historical Foundation. The foundation operates several popular museums, including the 1892 Bishop’s Palace, 1402 Broadway, and the 1877 Tall Ship Elissa and Texas Seaport Museum, 2200 Harborside Drive.

The foundation should be able to pay all its part-time museum workers for a month, Jones said.

HOW LONG CAN IT GO ON?

But the shutdown, and the lack of revenue coming in from the foundation’s properties and events, likely will slow down some restoration projects, Jones said.

“The question is for us just how long this goes on,” Jones said.

That’s a question state and federal officials so far haven’t been able to answer.

“We’re so reliant on the visitors that come here,” Hamachek said.

There were some staffing changes at Moody Gardens after the order to close, but many staff members are still required to care for the grounds and the animals, she said.

In the meantime, museums are working to up their digital game. The Railroad Museum is working on an app. The Bryan Museum is trying to move some of its collection online. And the historical foundation and Moody Gardens are both trying to post educational material for parents who have children at home.

Lone Star Rally should be moved to Gulf Greyhound Park next year and cancelled this year. Permanent businesses are hurting while temporary vendors have no expenses, taxes, rent or employees. This is a wakeup call for cities, the Galveston County health district and Judge Henry. He and mayors should set new laws that permanently move large gatherings in Galveston County to parks, beaches and areas away from citizens and businesses. Leaders must prepare for future problems from new viruses.

Mr. Bryan is 100% correct. Unfortunately, he even may be underestimating what is being done to our economy over this health crisis.

Reported on Bloomberg News, March 22: "Federal Reserve Bank of St. Louis President James Bullard predicted the U.S. unemployment rate may hit 30% in the second quarter because of shutdowns to combat the corona virus, with an unprecedented 50% drop in gross domestic product."

When we are facing a threat that is solely disease-based in type, an abundance of caution is the appropriate response. When a Federal Reserve president publicly speaks of unemployment levels that soon may exceed that of the Great Depression, a different approach is urgently needed that also takes into account the astonishing level of damage our economy is sustaining.

As of early Sunday afternoon, 12 cases have been reported in our county of over 300,000 persons for a known infection rate of 0.00004 (four hundred-thousands of a percent). Most are convalescing at home. While that absolute number will no doubt increase, we know the fatality rate nationally is declining as more people are tested.

The time for an abundance of caution is over and it is now time for managed risk assessment and risk/reward analysis. We simply cannot ignore actions that are jeopardizing the livelihoods of so many people for what appears to be vanishingly small returns relative to the impact they are causing.

Certainly government should encourage residents to take the recommended precautions while appealing to our sense of community and shared sacrifice to realistically minimize potential exposure. But to paralyze the economy, enforce soft martial law as we already see in some cities and spark the very fear that leads to panic buying and hoarding is unconscionable.

It is understandable that political leaders wish to be seen as doing something in the face of a major public health threat. But they must never make that concern so single-minded they ignore consequences to their actions that may be terribly destructive in other ways.

This is a very difficult time for our community, and for our nation. It is also a time of testing for our government leadership under the most trying of circumstances. We are relying on their judgment, their capacity to adapt when necessary, and their compassion as we pass through this crisis.