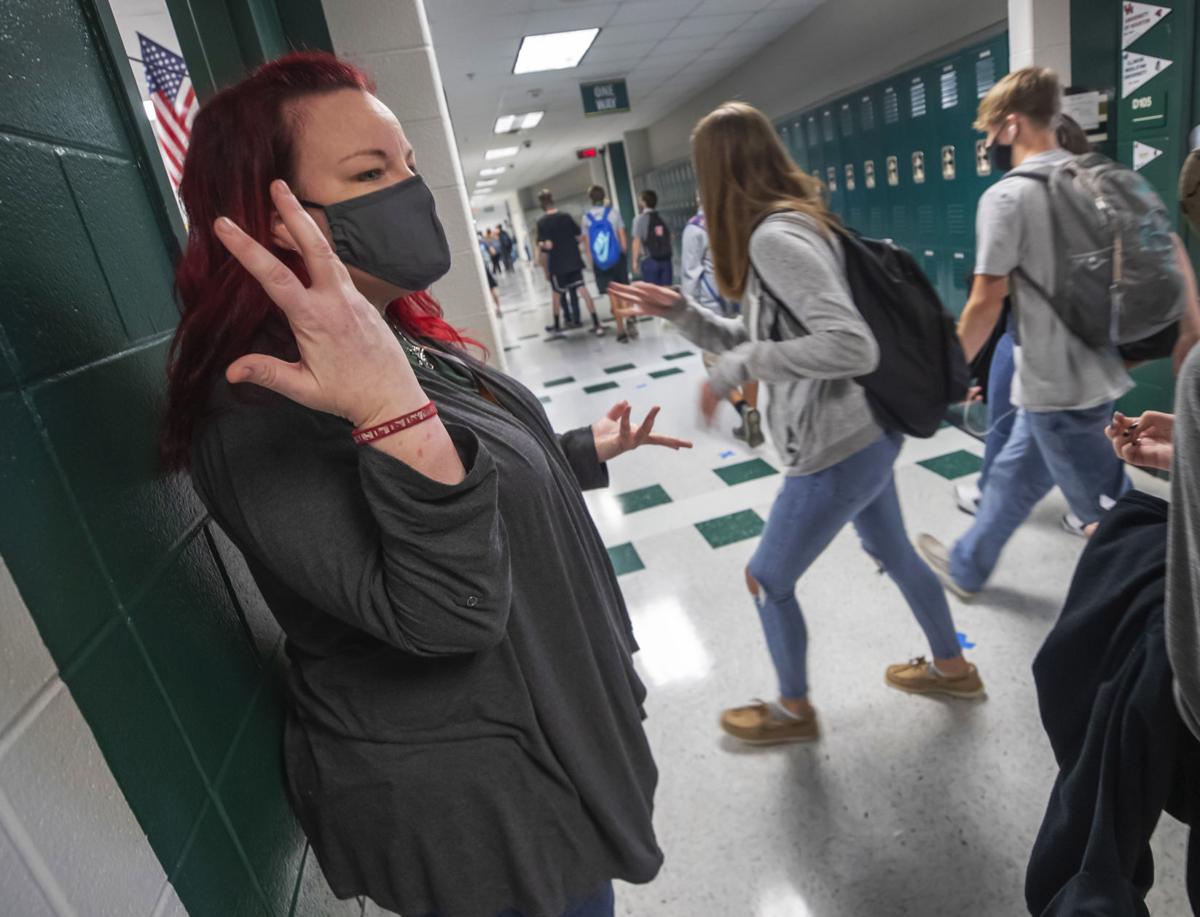 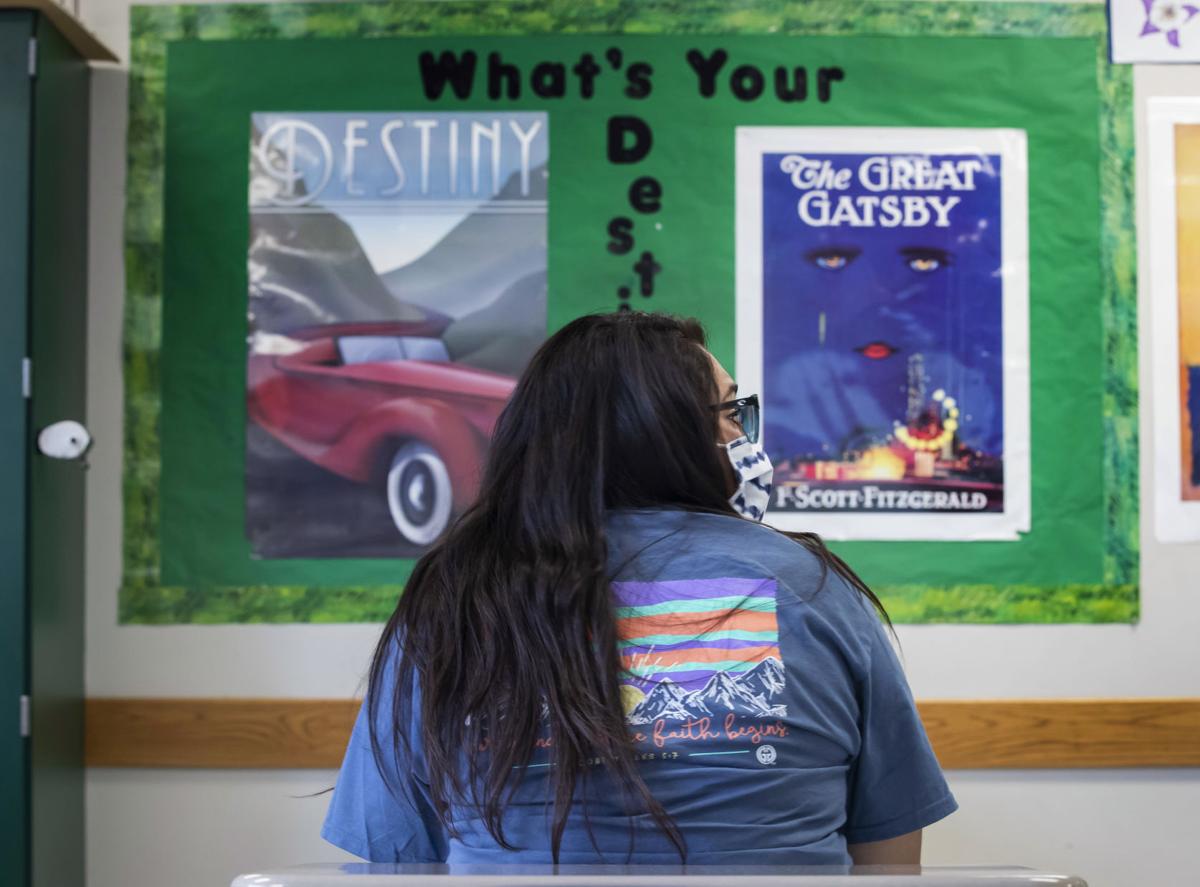 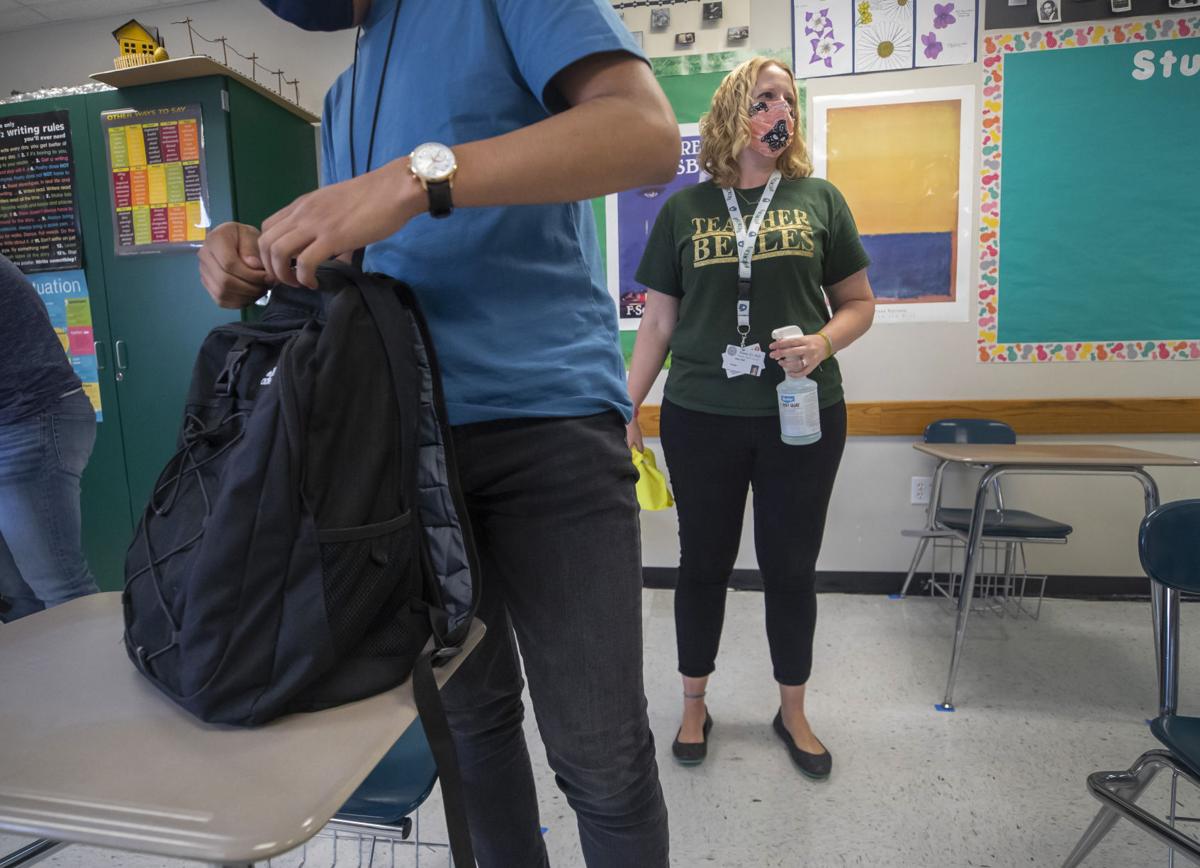 Santa Fe High School English teacher Amy Hoff waits with a bottle of disinfectant spray to clean desks as students pack their belongings for their next class on the first official day of in-person school attendance for students Tuesday, Sept. 8, 2020. 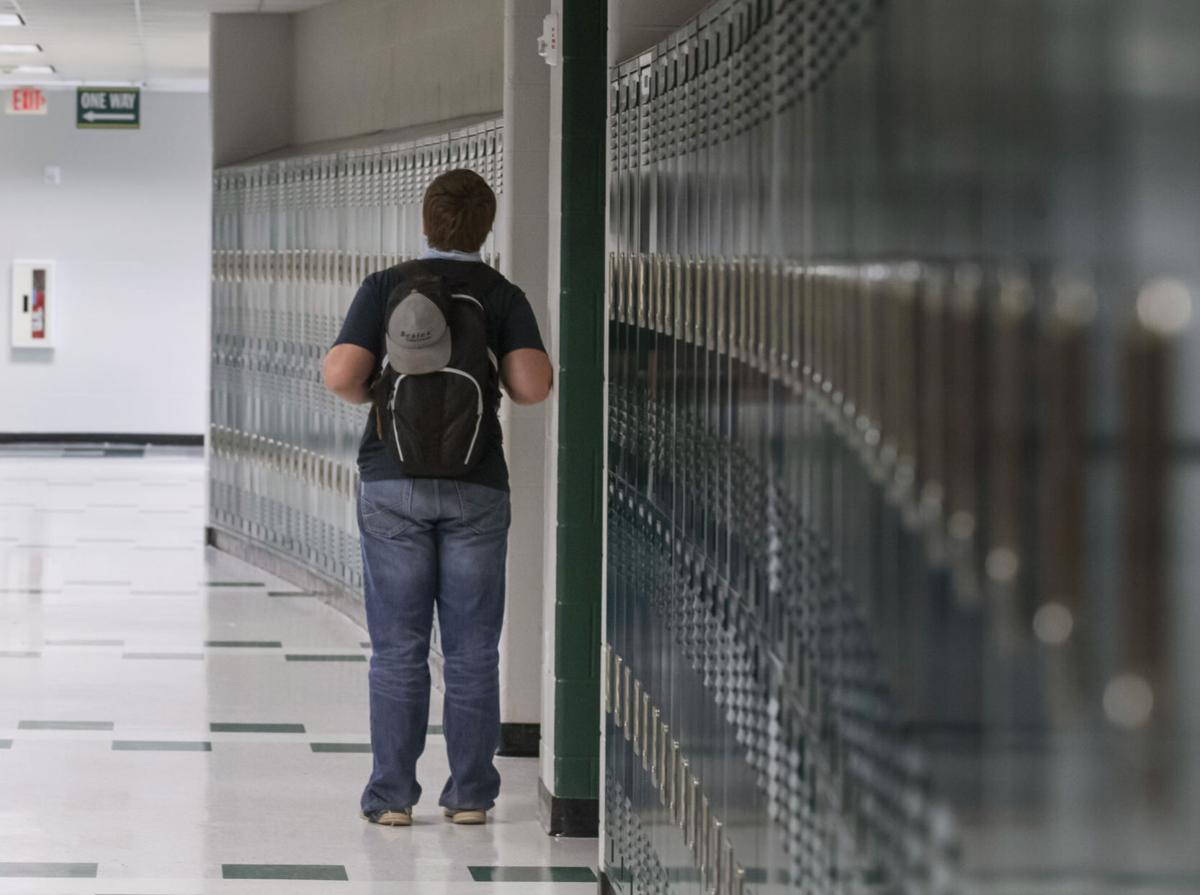 A Santa Fe High School student stands in a hallway on the first official day of in-person school attendance for students Tuesday, Sept. 8, 2020. 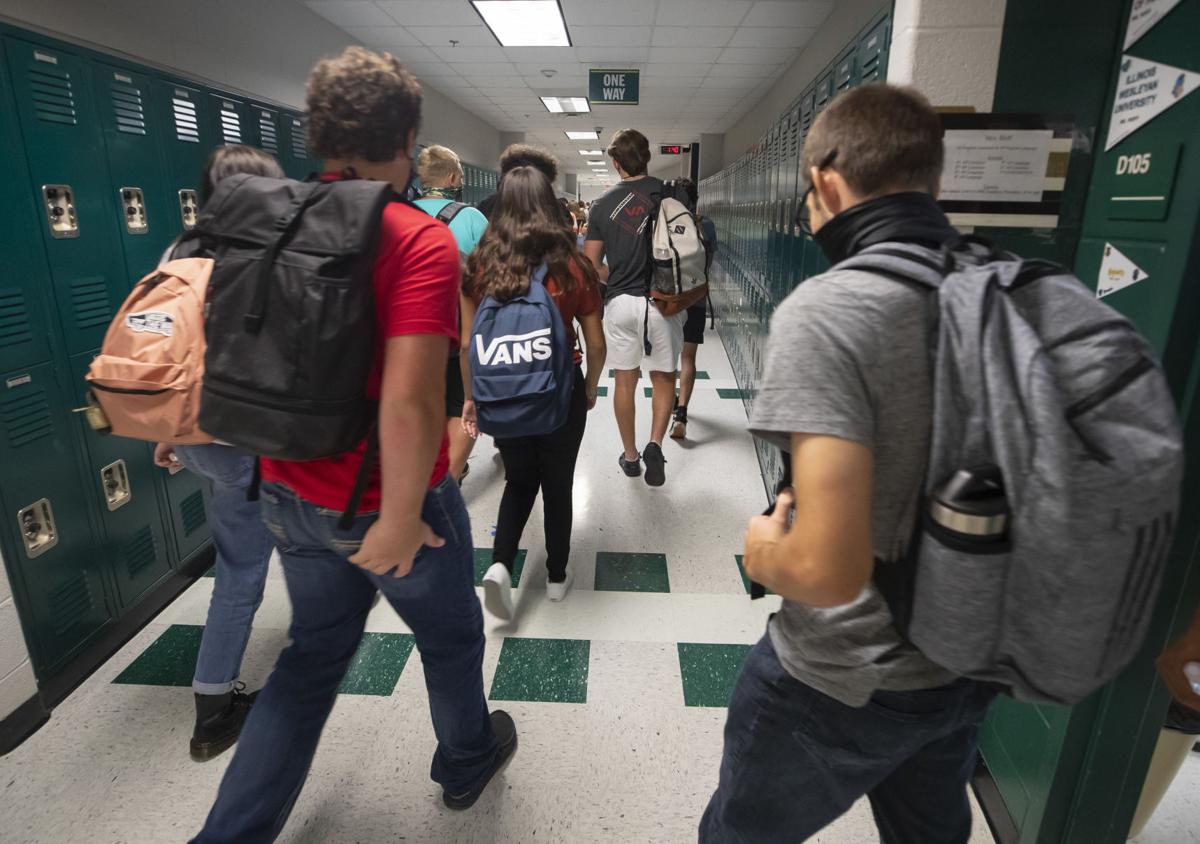 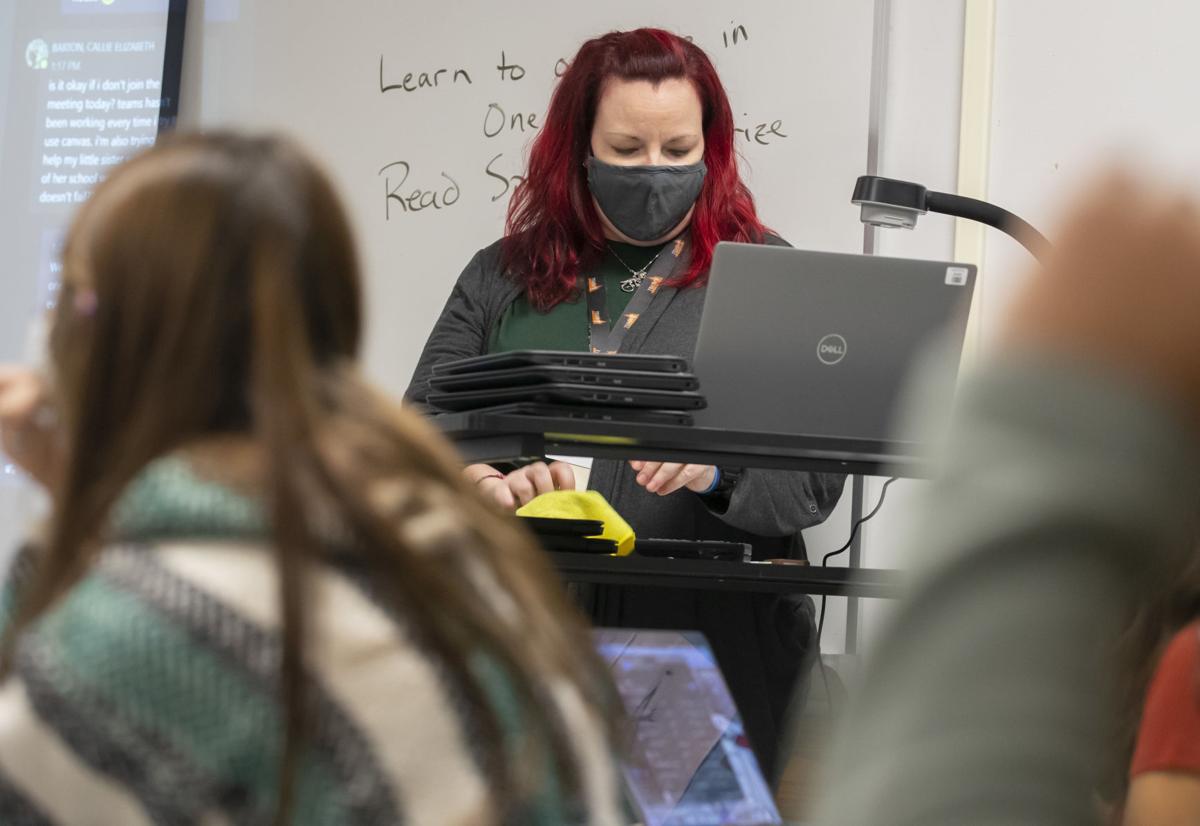 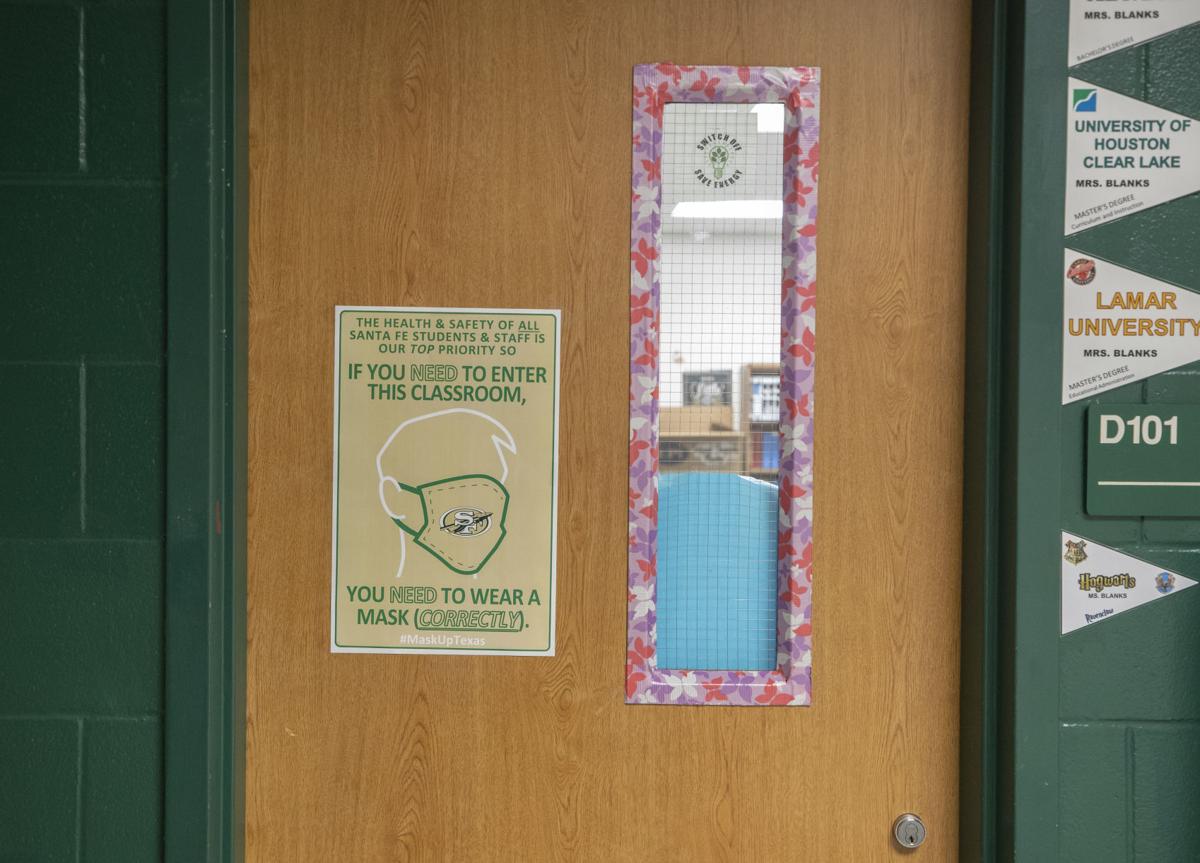 A sign on a door in Santa Fe High School notifies students that masks are required at the school Tuesday, Sept. 8, 2020.

Santa Fe High School English teacher Amy Hoff waits with a bottle of disinfectant spray to clean desks as students pack their belongings for their next class on the first official day of in-person school attendance for students Tuesday, Sept. 8, 2020.

A Santa Fe High School student stands in a hallway on the first official day of in-person school attendance for students Tuesday, Sept. 8, 2020.

A sign on a door in Santa Fe High School notifies students that masks are required at the school Tuesday, Sept. 8, 2020.

Amy Hoff stood in front of her class of seniors in a Darth Vader mask and asked them to move so she could wipe down their desks.

Hoff, an AP English teacher at Santa Fe High School, wasn’t wearing the full black metal helmet of a Sith lord. Rather, her face mask had Vader’s mug emblazoned on a field of pink and drawn like a Día de Muertos candy skull.

Think a sweet-but-kind-of-scary message for students on their first day back for in-person classes.

There are rules here.

“We’re still trying to figure it out,” Hoff said. “They’re excited, but they’re realizing how many breaks they got at home. For snacks, for drinks, for going to the bathroom without permission. They had more freedom at home, which I don’t think they realized, but they still want to be here.”

Students in the Santa Fe Independent School District went back to their first day of in-person classes Tuesday. With the exception of some students who attended orientation days last week, it was the first day back in class for most students who haven’t been in their school since the middle of March at the beginning of the pandemic.

“I think everyone gets a little nervous on the first day of school,” said Santa Fe High School Principal Rachel Harris. “But it’s just felt like a regular school day. Except that everyone couldn’t see that I was smiling at them.”

As regular as it seemed, the students returned to a new world.

Everyone inside the high school was required to wear face masks. At the beginning of the day, students are expected to report to the gym or cafeteria and answer questions about whether they’re feeling any symptoms of COVID-19.

As the day begins, the students are sent to their classrooms in phases, and between classes they’re limited to traveling one direction down hallways and to staying 6 feet apart from each other.

Inside classrooms, at least for the first few days, teachers give quick lessons about hand washing and social distancing. At the end of class, teachers are required to wipe down desks with a germ-killing solution before the next class enters.

It’s all part of a plan that administrators have been working on all summer, pretty much since classes were first closed by the coronavirus, Harris said.

More than 1,000 of the high school’s 1,300 students returned to school on Tuesday, Harris said. Students who didn’t return to their classes continued to attend school online. No one had to be turned away from the school on the first day, and only one student had to be reminded to put on a mask, she said.

Santa Fe students were among the first students in Galveston County to return to face-to-face learning after a statewide shutdown of schools in March.

The Friendswood Independent School District welcomed back students last week, and some other local school districts have begun to bring back some small groups of students, such as freshmen who need to overcome an adjustment period in a new building.

Most of the other school districts in the county will return to face-to-face learning by Sept. 21. Hitchcock Independent School District, however, won’t have students back in class until Oct. 14 — the latest date allowed by the Texas Education Agency.

The agency in July announced that all schools in Texas must offer face-to-face and virtual learning in the fall. Schools only are allowed to close at the order of health officials if an outbreak occurs within a school after it reopens.

It’s also possible that schools are only partially closed or sectioned off if a student or staff member tests positive for the virus.

Harris believed students would follow the school’s rules as long as they’re in place. Personal responsibility was being drilled into the high school students, she said. The message: If you don’t want the school to close, stay masked up and separated.

“It takes responsibility from the kids,” Harris said. “Hopefully, our parents will also help with that. Because what tends to happen is that we remind them to socially distance, but they’re teenagers, they want to be around other kids. We’re trying to teach them to spread out.”

In Hoff’s classroom, some students were skeptical about how long compliance would last.

Just before the period bell rang on Tuesday, students speaking to a reporter — on the condition that they wouldn’t be named — said they thought most of their classmates were following the rules on the first day.

They were less sure about how things would look two weeks from now.

“If it were up to the students, it would be very lenient,” one of Hoff’s students said. “If we didn’t have the teachers here telling us, we wouldn’t be wearing the masks.”