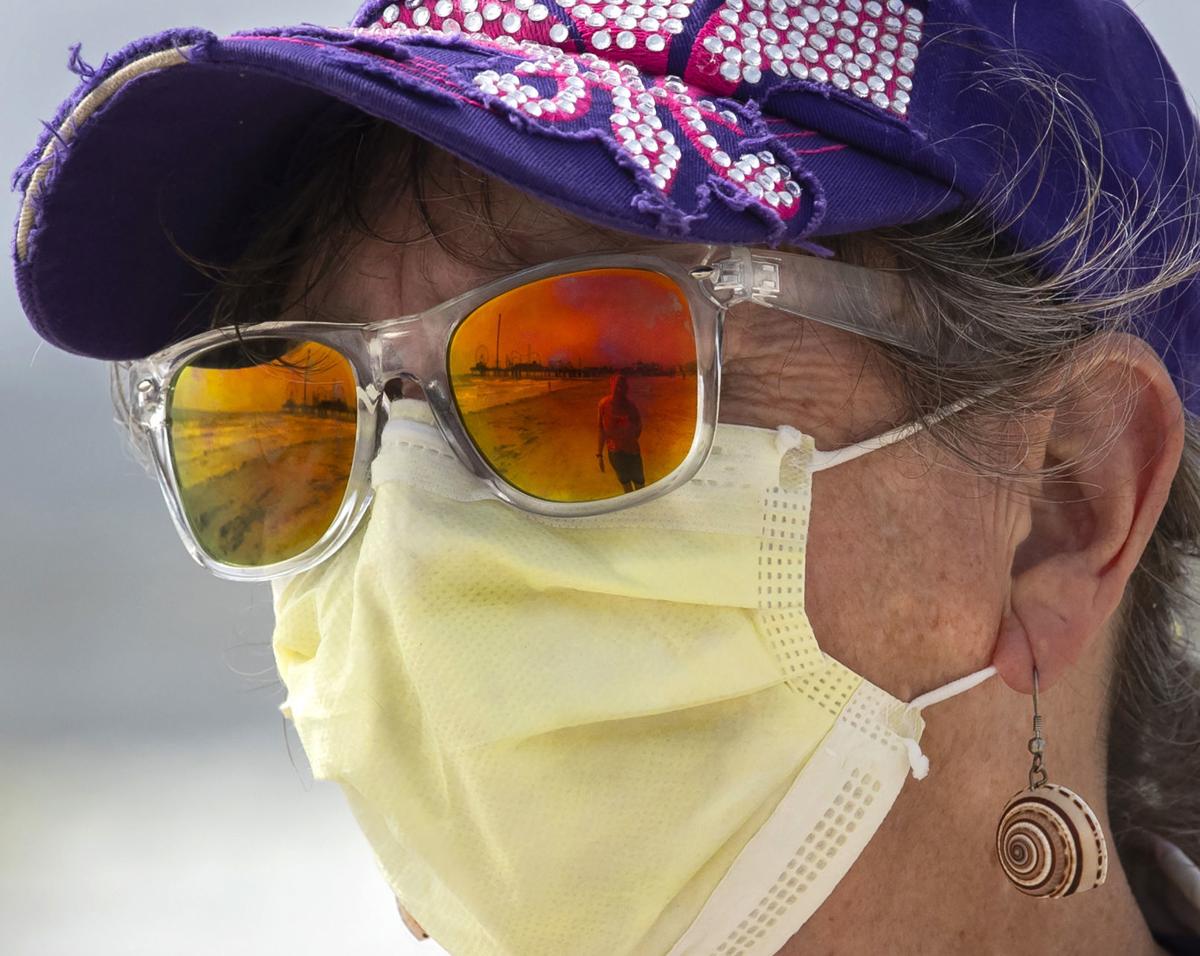 Angela Mooney, of Houston, speaks to friends on the beach Wednesday. Mooney said she was wearing the mask because of allergies, as well as the ongoing coronavirus pandemic. 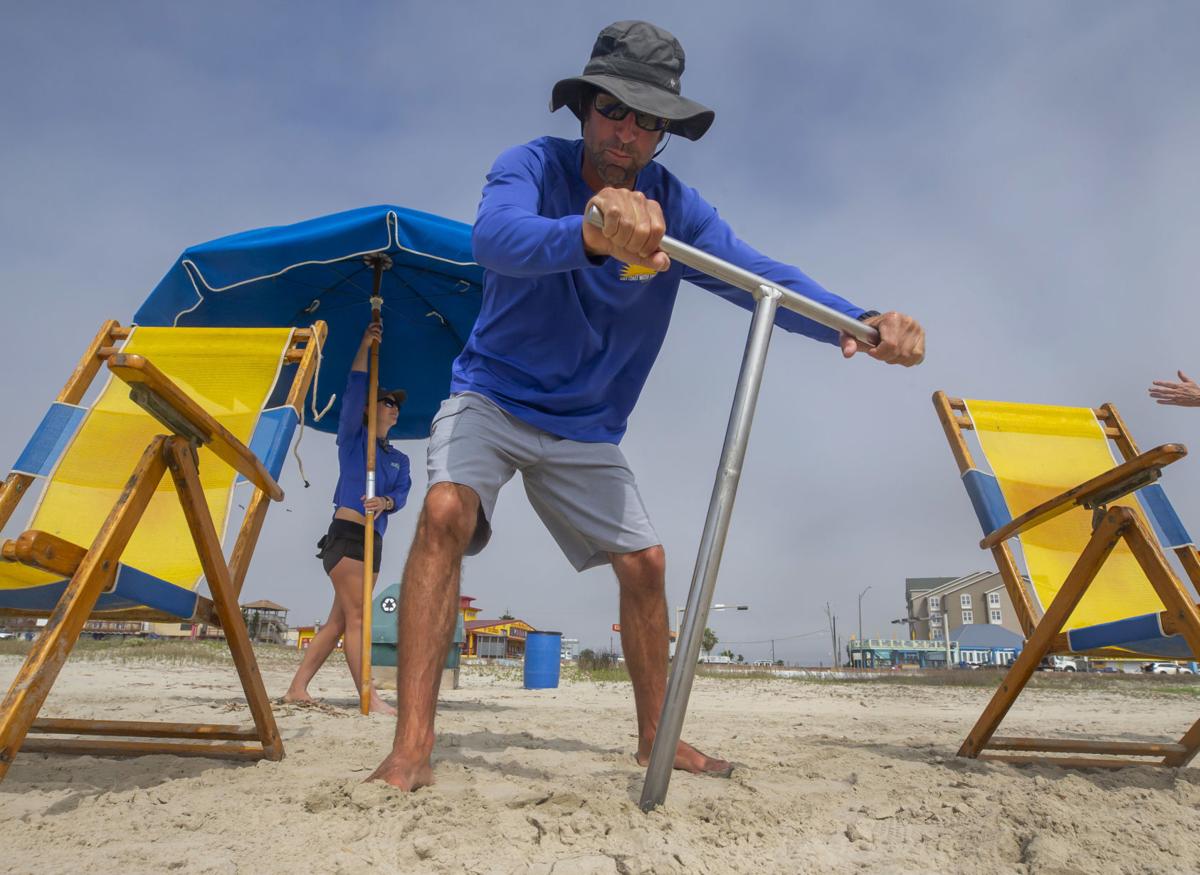 Jason Worthen sets up rental chairs and umbrellas along the beach near 27th Street in Galveston on Wednesday, March 18, 2020. 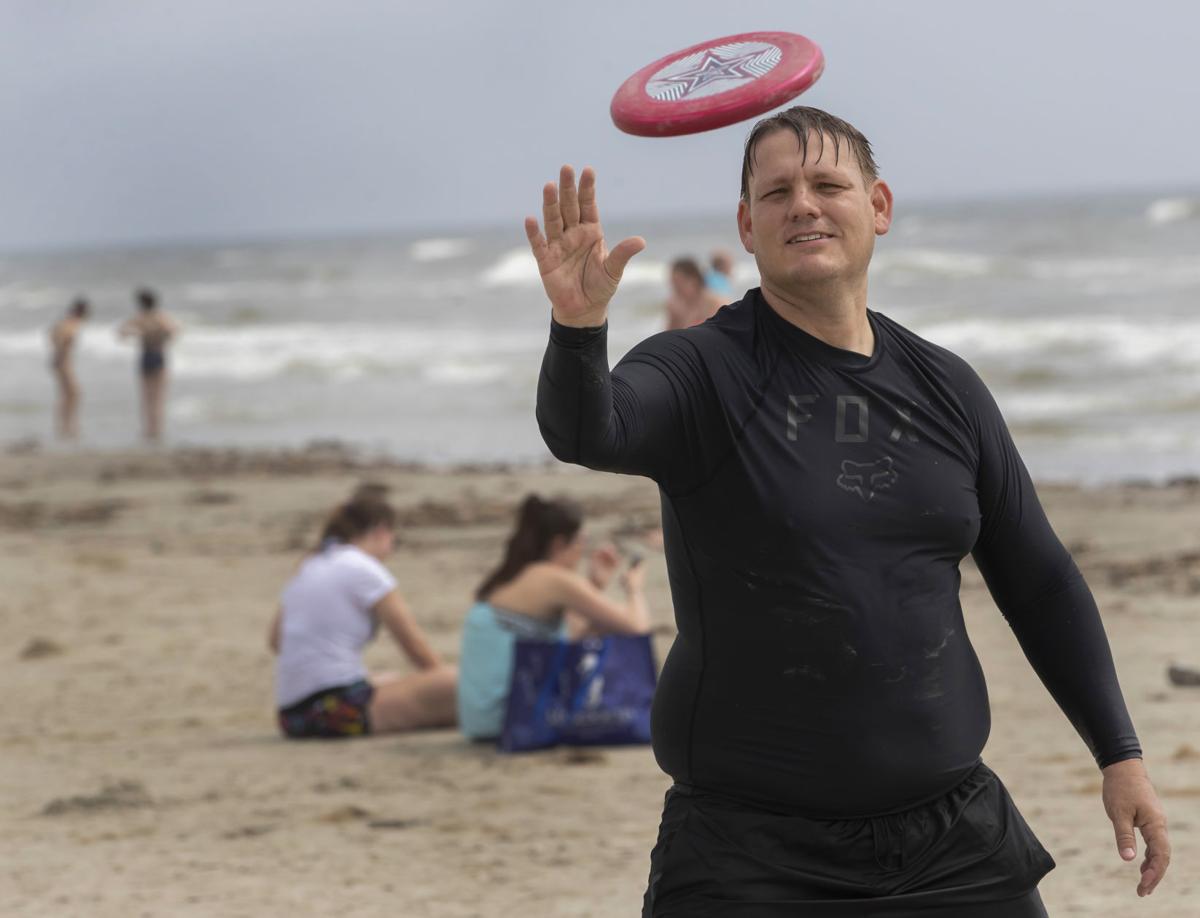 Nathan Wicker, of Dallas, catches a Frisbee while visiting the beach with his family in Galveston on Wednesday, March 18, 2020. 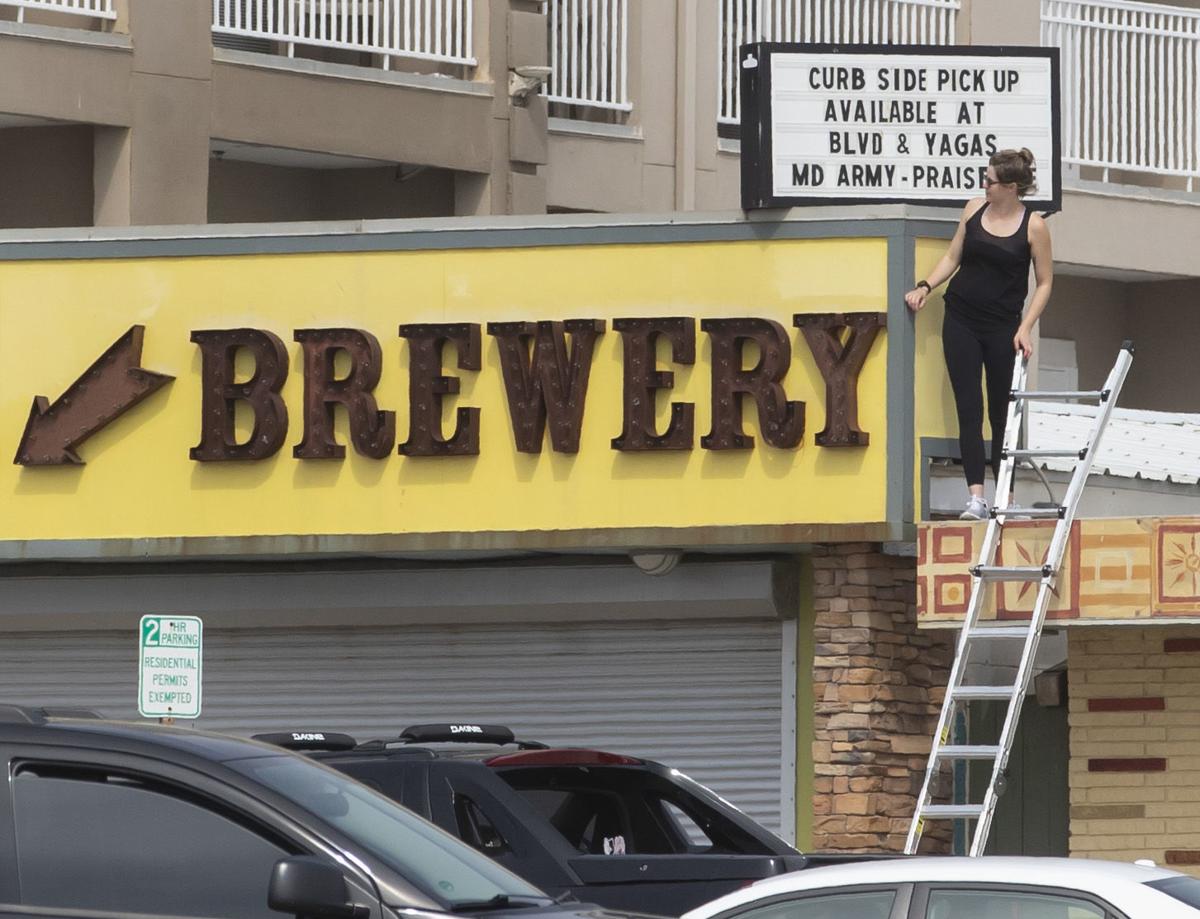 Courtney Rohlfs updates the marquee at Beerfoot Brewery on Seawall Boulevard in Galveston on Wednesday, March 18, 2020. 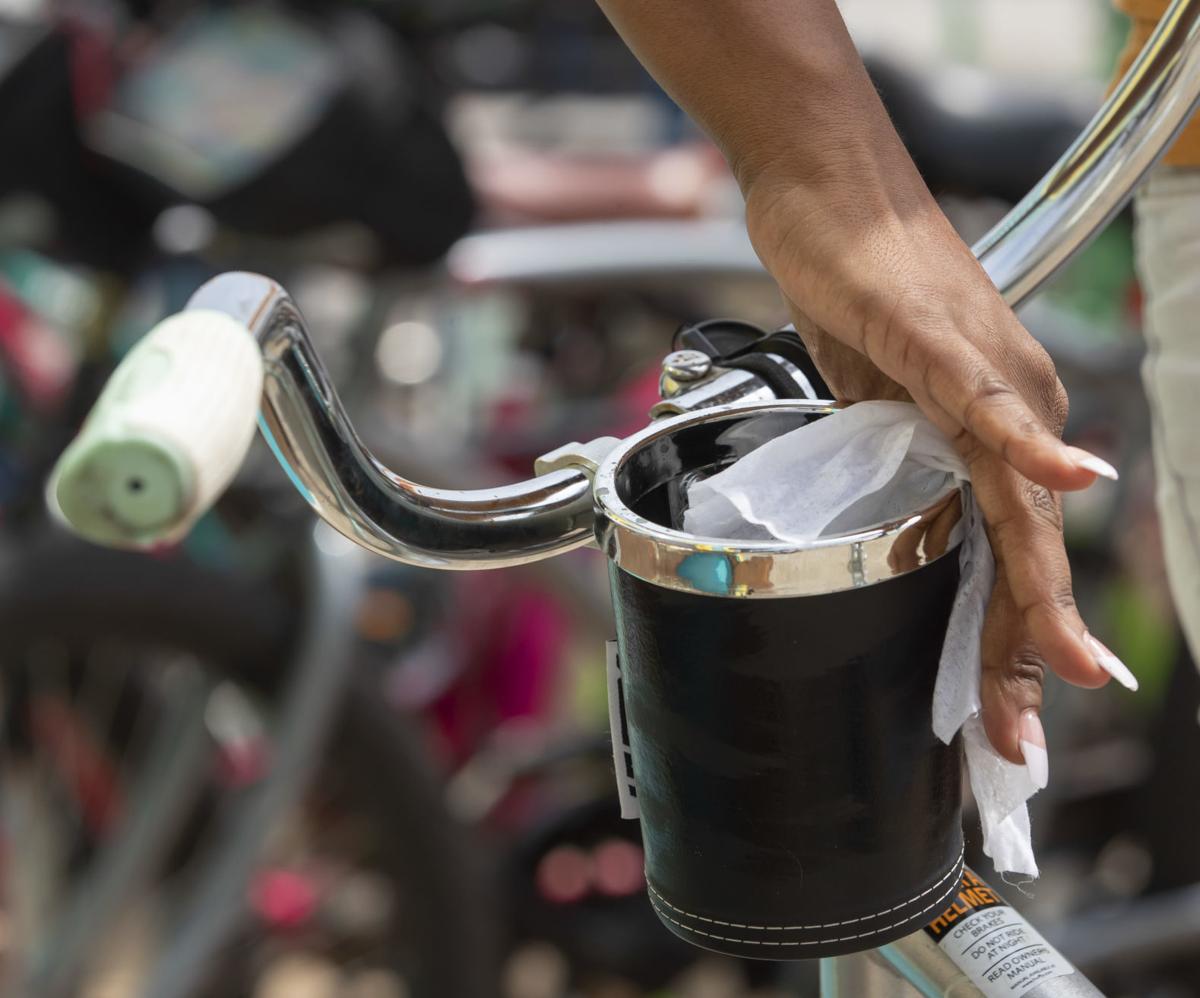 Deanna Griffin, an employee at the Salt Water Shop, wipes down a rental bicycle at the business on Seawall Boulevard in Galveston on Wednesday, March 18, 2020.

Angela Mooney, of Houston, speaks to friends on the beach Wednesday. Mooney said she was wearing the mask because of allergies, as well as the ongoing coronavirus pandemic.

Jason Worthen sets up rental chairs and umbrellas along the beach near 27th Street in Galveston on Wednesday, March 18, 2020.

Nathan Wicker, of Dallas, catches a Frisbee while visiting the beach with his family in Galveston on Wednesday, March 18, 2020.

Courtney Rohlfs updates the marquee at Beerfoot Brewery on Seawall Boulevard in Galveston on Wednesday, March 18, 2020.

Deanna Griffin, an employee at the Salt Water Shop, wipes down a rental bicycle at the business on Seawall Boulevard in Galveston on Wednesday, March 18, 2020.

A day after the city took the drastic step of closing bars, tourist attractions and restaurant dining rooms, Galveston officials began talking about whether to close beach access points in response to growing concerns about the spread of coronavirus.

The first discussions about the possibility came the same day the Galveston County Health District announced the third and fourth confirmed cases of coronavirus in the county, as testing continues to lag behind need nationwide and deaths in Texas rose to two.

City officials Wednesday talked about what it would mean if they decided to close beach access points, Mayor Jim Yarbrough said.

Yarbrough said he didn’t want to close beach access points and argued it was healthy for people to be outside and that a visit to the beach could give reprieve to families stuck at home.

Many people began working from home this week and county school districts extended spring break in an attempt to prevent the spread of coronavirus.

“It’s a change of pace to have the kids underfoot all the time,” Yarbrough said. “A little release and exercise is probably healthy.”

But if beach crowds are too large and people too close together, the city would be compelled to consider closing them, he said.

This week is traditionally the second of spring break in Texas and typically a busy time for beaches, drawing crowds from around the state and country.

Island beaches Wednesday weren’t packed with normal holiday crowds but still had visitors and activity, many families and groups of young people.

Texas beaches are public property by state law enforced by the Texas General Land Office. The law mandates that coastal cities provide numerous places for the public to reach and use the beaches.

The land office is telling local governments to make decisions at their own discretion, said Natalie Bell, manager of the beach access and dune protection program.

The land office isn’t going to close the state’s beaches, but the governor could issue a declaration doing so, land office spokeswoman Karina Erickson said.

While beach parks are still open, the Galveston Park Board of Trustees, which manages the popular Stewart Beach, among others, is monitoring the situation, Executive Director Kelly de Schaun said.

“However, if that trend doesn’t hold true, we have contingency plans ready should we need to reduce car counts or close the parks,” de Schaun said.

Being outside in the sunshine does typically boost people’s immune systems, said Dr. Philip Keiser, Galveston County’s local health authority. Salt water can also disrupt viruses such as the coronavirus, he said.

“But there’s nothing magic about it,” Keiser said.

People must make decisions they believe are best for themselves and for their own health, he said.

“We are encouraging people to stay home,” Keiser said. “We’re at that critical juncture in this epidemic that if it’s getting ready to take off where we see that doubling, tripling phase. Now is the time where we might be able to flatten that curve out.”

Mooney went to the beach Wednesday because she was worried people in the area eventually would be ordered into quarantine, she said.

“Who knows how long this is going to last?” Mooney said.

Mooney wore a mask, partly because she didn’t want to have her allergies act up, causing her to worry she might have coronavirus, but she also wears a mask to protect herself against allergens sometimes, she said.

If the city decided to close access points, there would be some logistical issues to work out, Yarbrough said.

The city could shut down access points, such as the stairs on the seawall, but some places couldn’t be physically blocked, he said.

Florida Gov. Ron DeSantis on Tuesday decreed that beachgoers must adhere to the U.S. Centers for Disease Control guidelines to limit gatherings to no more than 10 people and distance themselves from other parties by 6 feet.

On some Florida beaches, police are patrolling the sand to ensure compliance, according to reports.

Fort Lauderdale and Miami on Sunday closed several stretches of beach; the city of Naples has closed all public beaches within city limits until Monday; and the city of Clearwater ordered all its public beaches to close for at least two weeks beginning Monday, according to reports.

There is growing concern about spring break crowds gathering en masse at South Padre Island, Texas’ spring break hot spot, but as of Wednesday, no beach closings had been announced.

While the virus poses less risk to young, healthy adults as most spring break revelers are, the concern is they can be asymptomatic and bring the virus back to older or otherwise immunocompromised friends and family members.

I hope the city doesn't close the beaches, but it's up to beach goers to police themselves and avoid creating crowded areas - and the necessity of closing them. Instead, consider taking a walk around your neighborhood. Pick up some trash, work in your yard. Offer to mow your neighbor's yard. Paint your porch. Fire up the BBQ to cook some of that meat you're hoarding. And clean out the drains on your street - it's almost hurricane season again.

Bailey> Any activity keeping individuals alone and in the sun should be good ways to avoid the virus.

Can the beaches be restricted to residents only?

Very doubtful the State would allow that. And they shouldn't.

Closing the beach would be the definition of government oversight and control. It’s an open space and an easy way to still enjoy life after they shut everything else down. The Government doesn’t think we are capable of maintaining a safe distance and taking care of ourselves. How incompetent do they think we are?

Maybe they've been to the grocery store lately.

Strictly speaking, if the intention is to protect the residents of Galveston, perhaps we should limit access to the island at present. Our city leaders did this after Hurricane Ike, on the logic that services were not available to help those who might need them. The present virus creates the threat that treatment facilities will be overwhelmed, and therefore not available to people who might need them. If we aren't going to let tourists visit our attractions or eat in our restaurants, why should we let them bring the virus to the beachfront?

Think about this; it's a two-way street. How about we shut down the ferry and I45 to outbound folks from Galvatraz? We mainlanders surely don't want to be infected with BOI fever or not as deadly Coronavirus. Your solution is just fine as long as you aren't allowed to leave and UTMB accepts all infected patients.