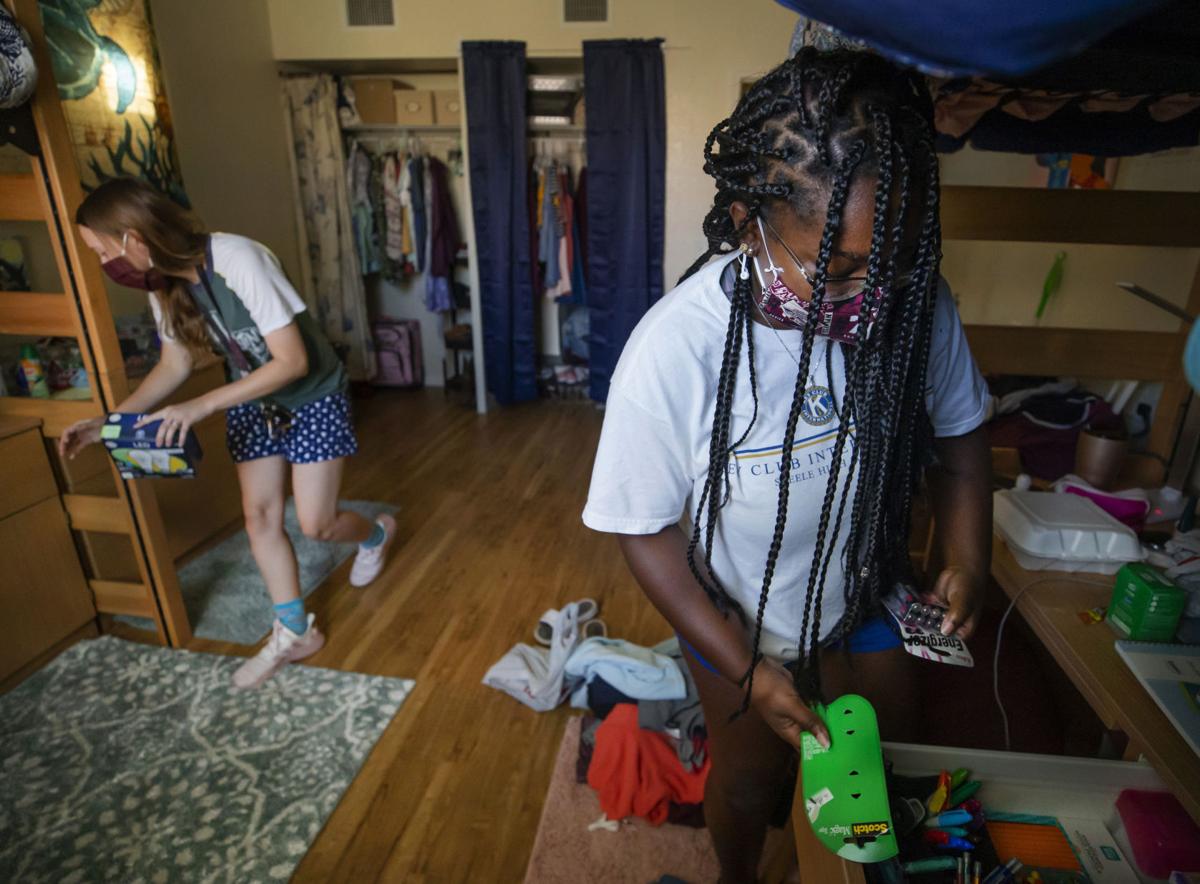 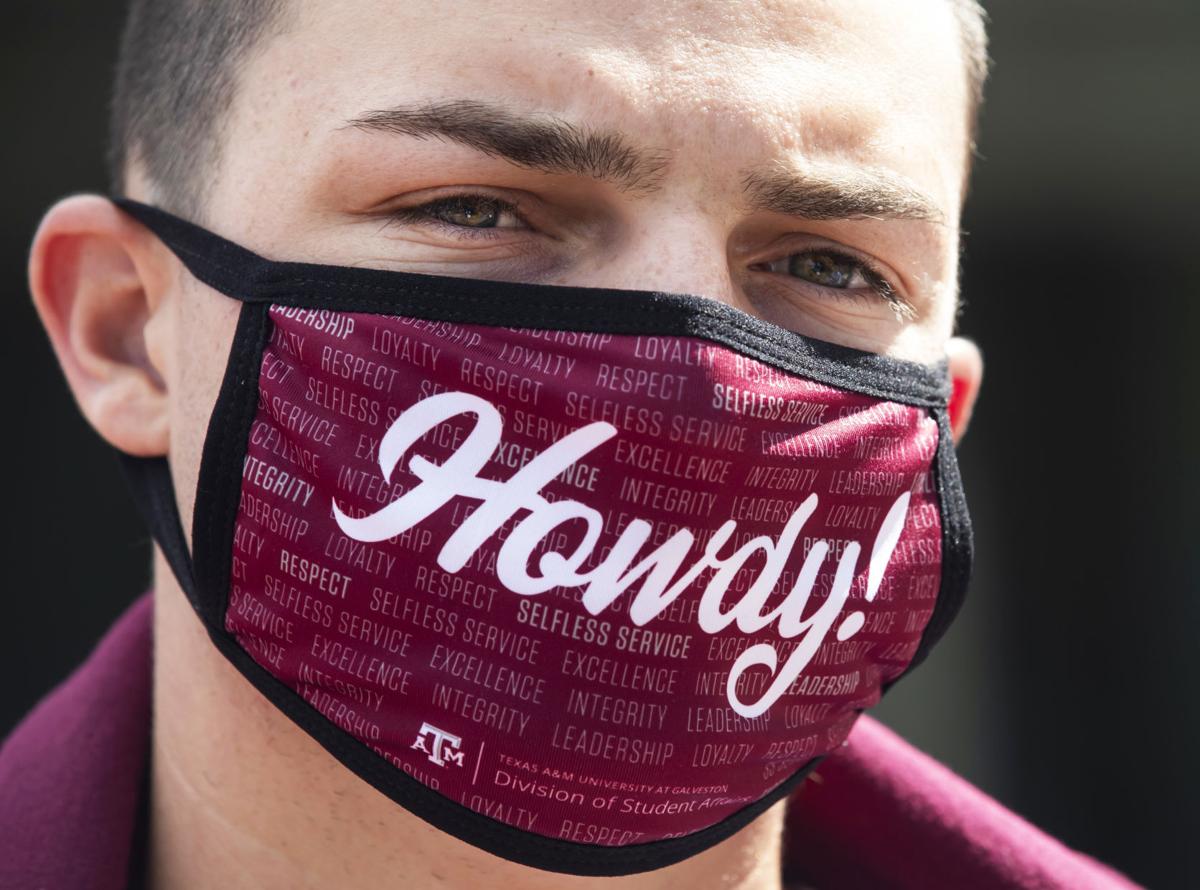 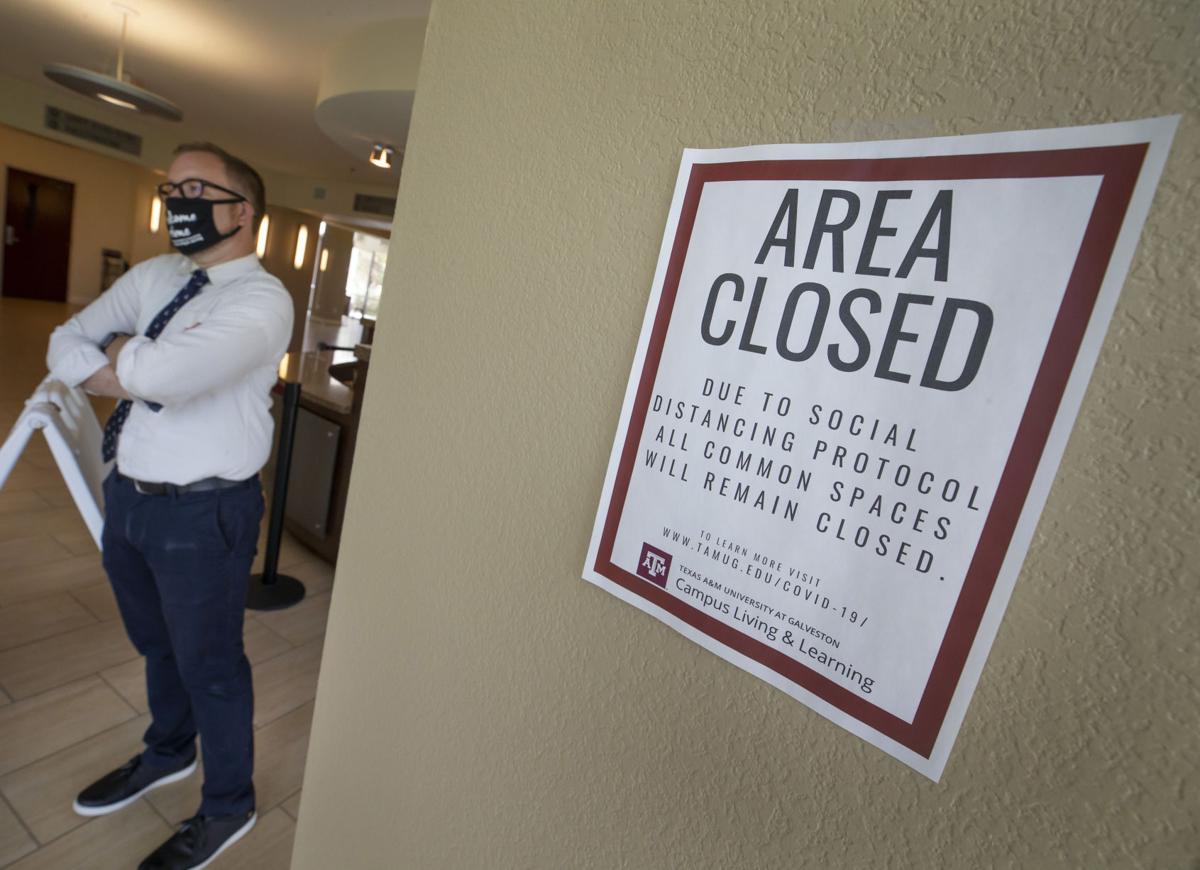 A sign hangs on a wall in the lobby of a dormitory as Texas A&M University at Galveston Director of Campus Living & Learning Neil Golemo speaks Thursday, Aug. 13, 2020, about regulations enacted to prevent the spread of the coronavirus on the university campus in Galveston this semester. 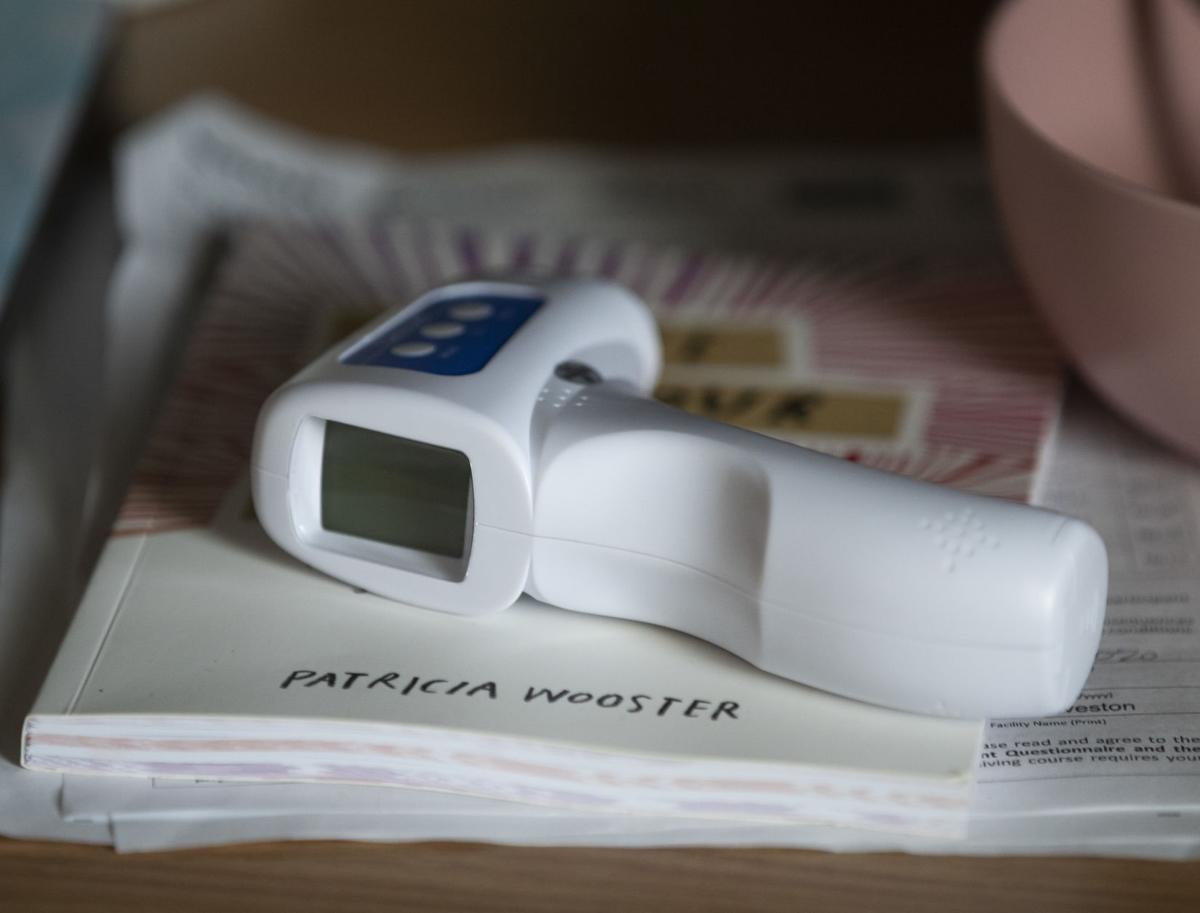 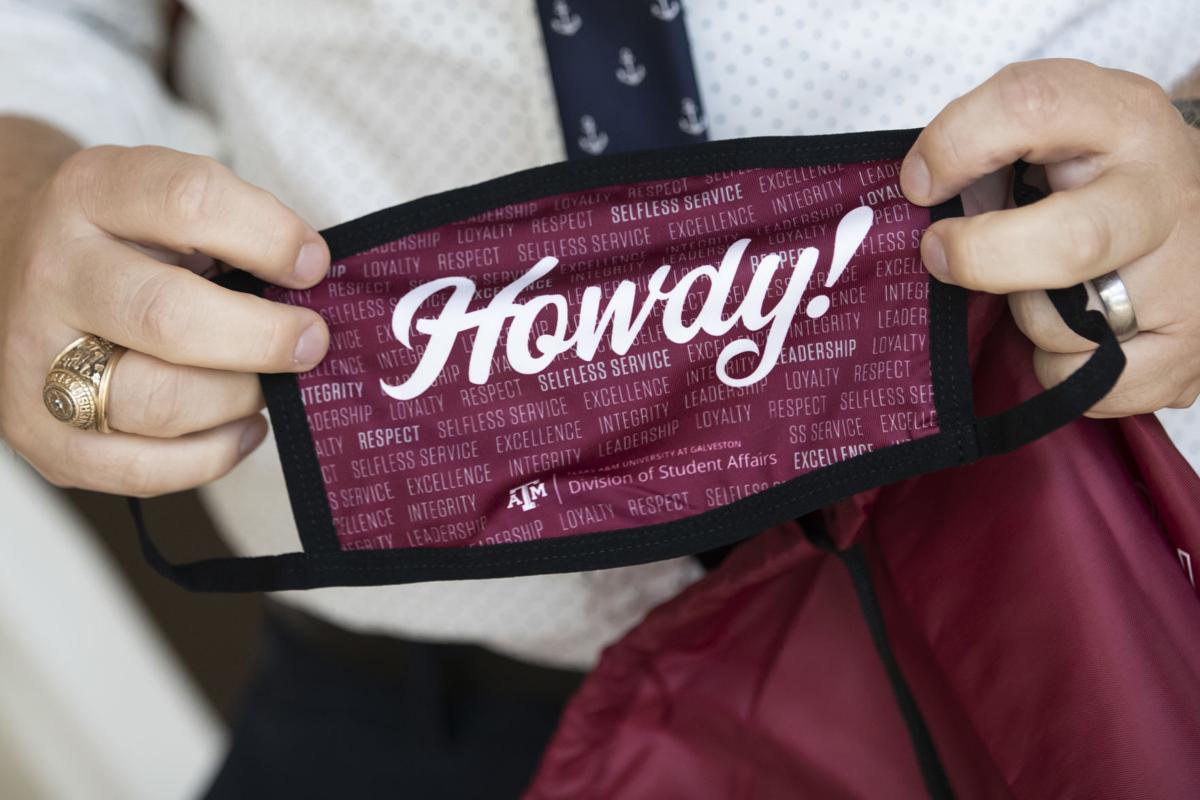 A sign hangs on a wall in the lobby of a dormitory as Texas A&M University at Galveston Director of Campus Living & Learning Neil Golemo speaks Thursday, Aug. 13, 2020, about regulations enacted to prevent the spread of the coronavirus on the university campus in Galveston this semester.

Things were so quiet in Pacific Hall on Thursday morning you would think students were still on their summer break.

Thursday was, officially, move-in day at Texas A&M University at Galveston, when the first of hundreds of students who will live on campus this year were scheduled to arrive.

But there was far less hustle and bustle on campus this year than there might be in a typical year. To limit crowds, students were required to schedule a time to check in on campus. Over the past two weeks, the school has allowed incoming students to bring their dorm supplies in preparation for the new academic year.

Thursday was the first day many students were on the Pelican Island campus since the COVID-19 pandemic shut down activities in March. With classes set to start again next week, there are a lot of things to stress about, said Rachel Luke, a freshman from Salado.

Not all those worries are about the coronavirus.

“My chemistry class,” Luke said. “I’m stressed about that. I’m jumping ahead because I took a class in high school.”

For the freshman class of 2020, starting college in a pandemic is just another thing to roll with, she said.

“We’ve been living like this for a while,” Luke said. “We’re kind of used to it. Our senior year kind of got cut off. But this is better than not being able to come.”

Typically, about 1,400 students live on campus, said Neil Golemo, director of Campus Living & Learning at Texas A&M University at Galveston. During this fall semester, the school expects about 1,100 students to be on campus and in class, he said.

Texas A&M University at Galveston offered students the choice of taking classes remotely, Golemo said. But at the Galveston campus, the specialized marine courses for which many students attend the school are difficult to complete in an online class.

“A lot of our classes are experiential,” Golemo said. “You can’t learn to use a sextant online. It’s really, really hard to do a fish dissection online. We knew pretty quickly that wasn’t going to be a realistic option.”

Texas A&M University Chancellor John Sharp in late May announced schools within the system would reopen for in-person classes for the fall semester.

The announcement came before dramatic spikes in the number of COVID-19 cases in Texas in June and July. Despite many of those cases being attributed to young people, the university didn’t change its plans for the fall semester.

NOT BACK TO NORMAL

Still, not everything will be typical on Pelican Island this year. The university allowed more students than usual to commute to school this year, if they live at home with their parents, Golemo said.

Typically, the university doesn’t allow students to live in off-campus housing while they’re attending school, he said. No overnight visitors will be allowed in campus housing during the first semester, Golemo said.

When they’re on campus, things won’t be businesses as usual. Everyone on campus is expected to wear face masks outside their dorm rooms, Golemo said. Inside the dorms, students aren’t allowed to visit neighbors between floors, and the school’s cafeteria is serving food as takeout.

Students were required to listen to two COVID-19 safety lectures and complete associated quizzes before arriving on campus. They also were asked to quarantine themselves for two weeks before heading to school.

Students who test positive for COVID-19 will have to isolate either off-campus or in a designated isolation room on campus, according to university policies.

Administrators have heard few complaints about the rules so far, Golemo said.

“We’ve had very little pushback,” Golemo said. “I’ve been shocked. The nervous part of me is waiting for the other shoe to drop.”

When they arrived on campus, students were each given a bag with some supplies for the school year, including a face mask emblazoned with “Howdy” across it.

The face masks also have smaller words printed on them, including those that make up Texas A&M’s “core values,” such as “respect” and “selfless service. “The words are there as a reminder that students have a responsibility to keep each other safe.

As a general rule of thumb, however, if you’re close enough to read the smaller words, you’re too close, Golemo said.

There are some rites of college passage that are still unavoidable. Some students are meeting their roommates for the first time and are still feeling out how they feel about their living situations.

Ahead of moving in, students matched with roommates on the website, similar to a dating app, that let them compare interests, sleeping habits and other factors.

Eli Caillouet, a freshman from New Orleans, said he was still getting to know his three new roommates after being on campus for a little more than a day. Everyone seemed to be following the rules, he said, noting that he was used to taking precautions because he was coming from a COVID-19 hotspot.

After finishing his senior year of high school and graduating in a pandemic, Caillouet said he was getting used to the unusual circumstances. At least with the start of college, he and most of his classmates are in the same boat.

“I’m not quite sure what I’ll be missing,” Caillouet said. “I haven’t done it yet, so I’m not sure what the difference from a regular year and this year would be.”