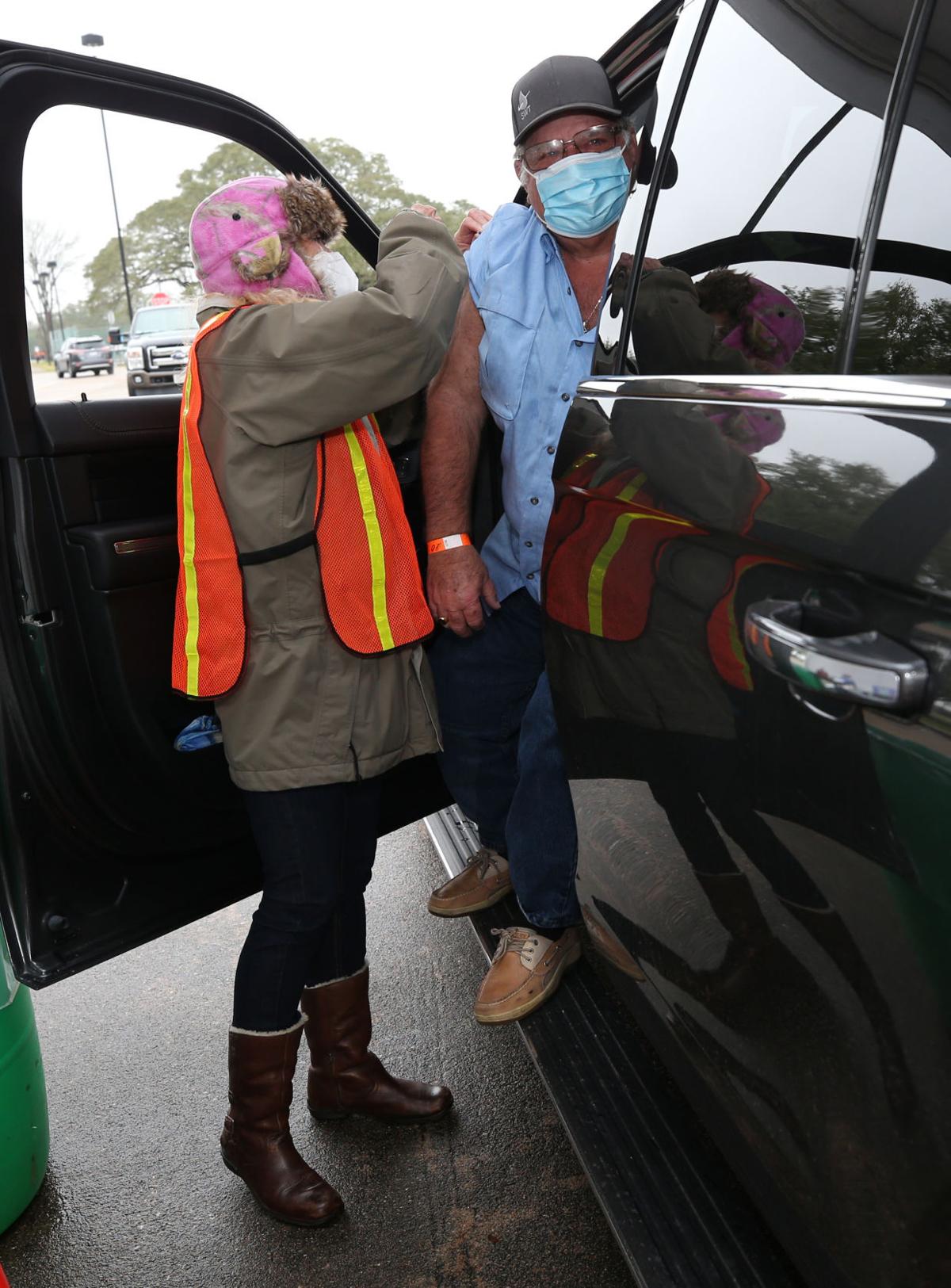 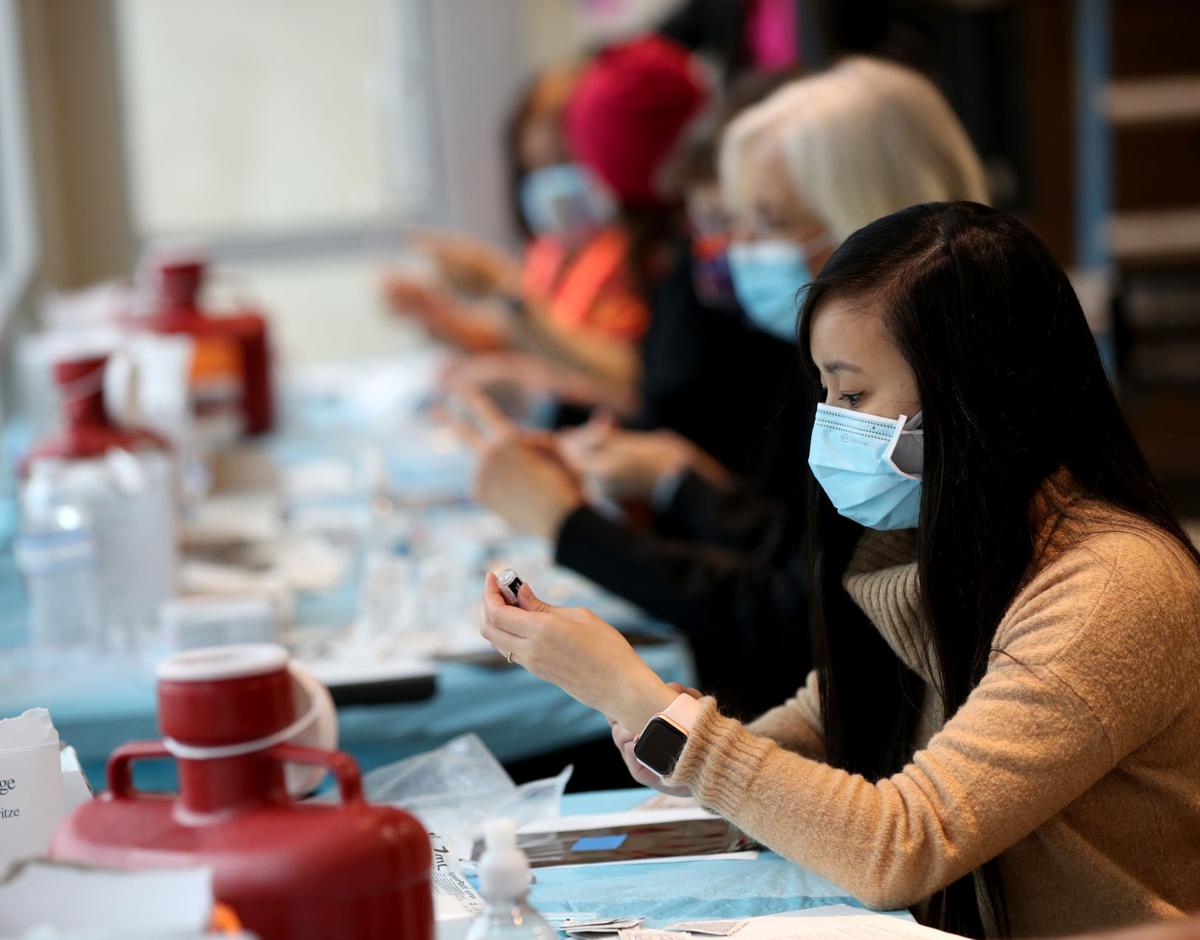 Kristina Nguyen, a pharmacist, fills syringes with the Pfizer COVID-19 vaccine as she volunteers at Galveston County’s mass vaccination site at Walter Hall Park in League City on Friday, Feb. 12, 2021. 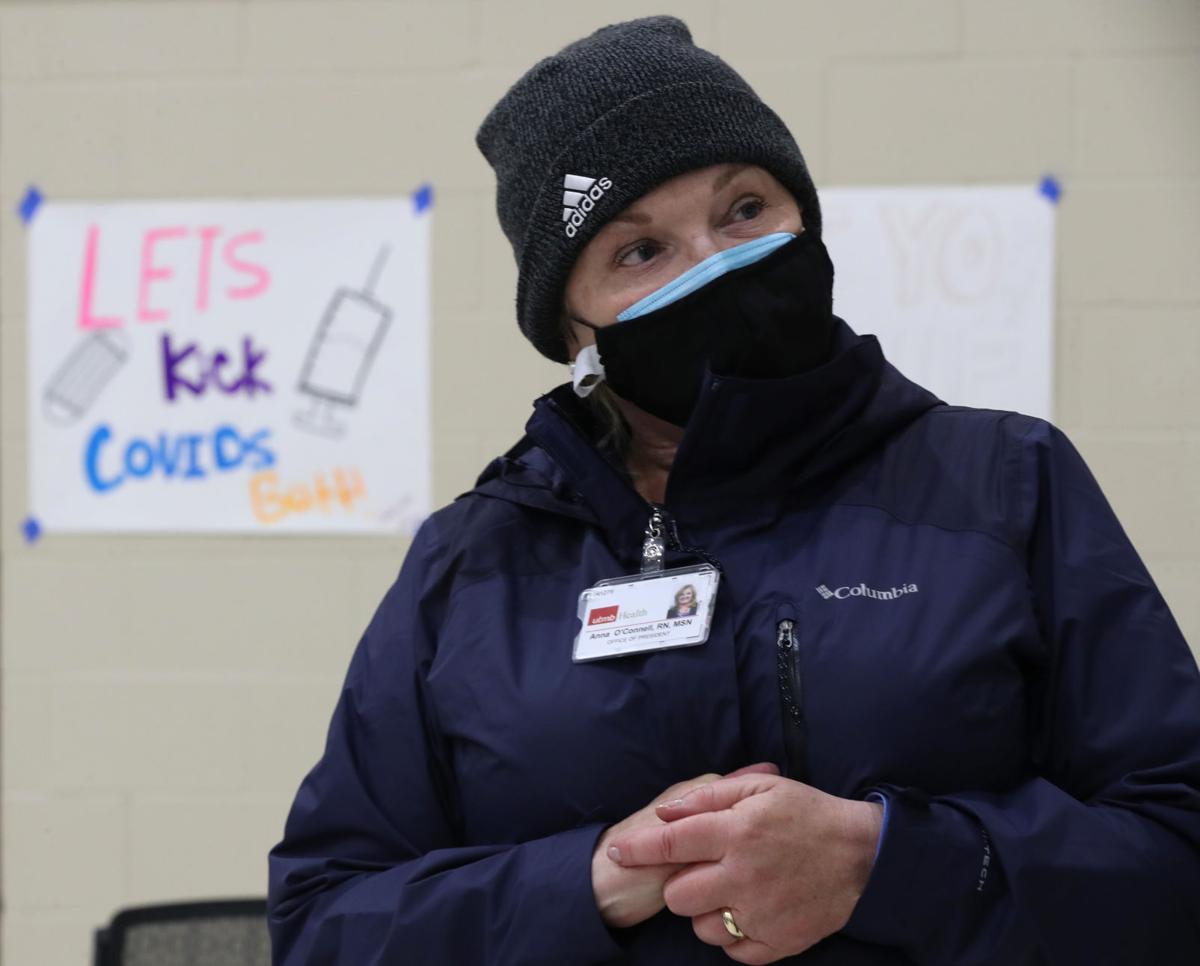 Anna O’Connell talks Friday, Feb. 13, 2021, about the students from all of the programs at the University of Texas Medical Branch in Galveston who are volunteering at COVID-19 vaccination clinics. 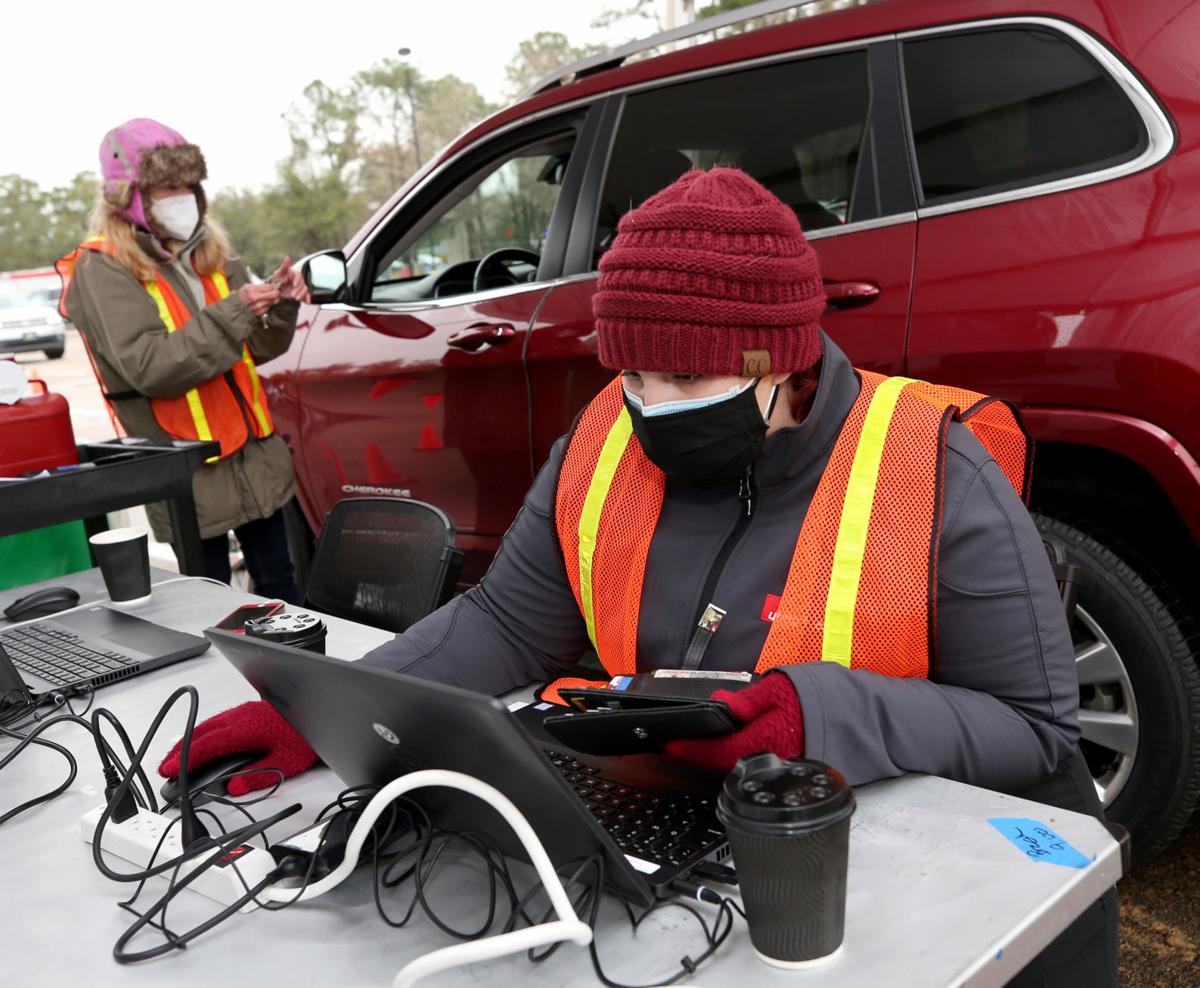 Lavinia Cumpian, a medical student at the University of Texas Medical Branch in Galveston, creates a vaccine card for a patient as she volunteers at the county’s mass vaccination site at Walter Hall Park in League City on Friday, Feb. 12, 2021.

Kristina Nguyen, a pharmacist, fills syringes with the Pfizer COVID-19 vaccine as she volunteers at Galveston County’s mass vaccination site at Walter Hall Park in League City on Friday, Feb. 12, 2021.

Anna O’Connell talks Friday, Feb. 13, 2021, about the students from all of the programs at the University of Texas Medical Branch in Galveston who are volunteering at COVID-19 vaccination clinics.

Lavinia Cumpian, a medical student at the University of Texas Medical Branch in Galveston, creates a vaccine card for a patient as she volunteers at the county’s mass vaccination site at Walter Hall Park in League City on Friday, Feb. 12, 2021.

Vaccine hub workers shuffled out of the miserable weather and into the pavilion at Walter Hall Park in League City on Friday morning in search of hot coffee to help warm up their hands for a few minutes.

They’d been at it since 6:30 a.m. and had hours still to spend in the cold, wet weather, reaching into car windows to poke people with hypodermic needles loaded with COVID-19 vaccine.

The goal Friday was to inoculate more than 900 people at the county’s hub. Hub managers would aim for more than 2,000 on Saturday.

Local health officials say the hub is critical to getting large numbers of people vaccinated quickly. Three weeks after its creation, the hub appears to be working. Galveston County has one of the highest vaccination rates in the state.

That’s impressive, because most of the people working there are unpaid volunteers.

“We are so thankful we have them,” Galveston County Judge Mark Henry said. “We can’t thank them enough for what they’re doing.”

To accomplish its daunting mandate of vaccinating many thousands of people as soon as possible, Galveston County has leaned on an army of volunteers.

As many as 90 percent of the people working at the county’s vaccine hub in League City on Friday were volunteers, officials said.

Those volunteers helped check people into the site, verified their eligibility, reconstituted doses of vaccines, gave people their shots and watched over them for signs of allergic reactions.

Volunteers said they were motivated by altruism, but also by other, more tangible incentives. Nursing students from Galveston College receive credit, and real-world clinical experience, which has been in short supply during the pandemic.

For others, the motivation is even simpler — volunteers are guaranteed their own dose of vaccines.

HEALTH WORKERS AND OTHERS

Officials had anticipated needing volunteers ever since the hub opened, Dr. Philip Keiser, the county’s local health authority, said Friday. Although the first run-through was staffed mostly by University of Texas Medical Branch employees, they couldn’t keep at the task indefinitely, Keiser said.

“Unfortunately, they can’t run a hospital and a bunch of drive-throughs at the same time,” Keiser said.

So planners turned to businesses and public institutions to staff the clinic. Volunteers have included workers and students from the medical branch, Galveston College and College of the Mainland. Businesses, including CVS, Kirby Inland Marine and Houston Physician’s Hospital, a practice co-owned by state Rep. Greg Bonnen, who has worked at the hub. More businesses are in line to help.

The health district was working on a plan to train people without a medical background to give shots, Keiser said.

Other volunteer roles, such as reconstituting the vaccine to make it ready for patients, also require special training.

Kristina Nguyen, a CVS pharmacist from Houston, was doing that job Friday. Nguyen volunteered through her company, in part because of the promise of being vaccinated, she said.

“I will get vaccinated today,” she said. “That is an incentive. But I think the big picture is that we want to be part of history and get the majority of our population vaccinated.”

Regulations and precautions enacted during the COVID pandemic have shut down many normal opportunities for trainee nurses to work in clinics and hospitals, Eubank said. That’s a problem, because nursing students need a certain number of clinical hours to be certified, he said.

“We are really desperate for clinicals,” Eubank said. “We can do a certain number of hours with simulations, but we need to have hours with patients.”

The college is providing 50 students to the vaccination effort.

“They’re loving it,” Eubank said. “They’re already starting to feel what it will be like to be a nurse.”

The county could pay for people to staff the vaccination site, with the expectation the costs would be reimbursed by the federal government, Henry said. But right now, plenty of people are willing to do the work unpaid, officials said.

Still, the volunteers are a vital component of the county’s vaccination program and the demand for volunteers is expected to increase in coming weeks, officials said.

Local officials were desperate for health care workers of any kind, including veterinarians and emergency medical technicians, to join the effort as thousands of people begin returning to vaccine sites for their second doses and, the county hopes, greater numbers of doses arrive from the state.

There was no worry about using vaccinations as an incentive to draw volunteers, Keiser said. People working at the hub are front-line health care providers by definition, he said.

“It’s a principle of public health,” Keiser said. “If you’re going to be involved in a vaccination effort, you need to be vaccinated. We can’t ask people to come, expose themselves to hundreds of people every day and say ‘You can’t get the vaccine.’”

The first public vaccination clinic in Galveston aimed to inoculate the city's most vulnerable groups.

Because of icy roads and other dangers, most vaccinations in Galveston County were delayed this week.

Medical and non-medical volunteers are still needed. To sign up, go to gcoem.org

Witnessed their efforts Saturday! Outstanding! It was soooo cold but they still seemed to enjoy what they were doing. A very positive experience. Thank you all!