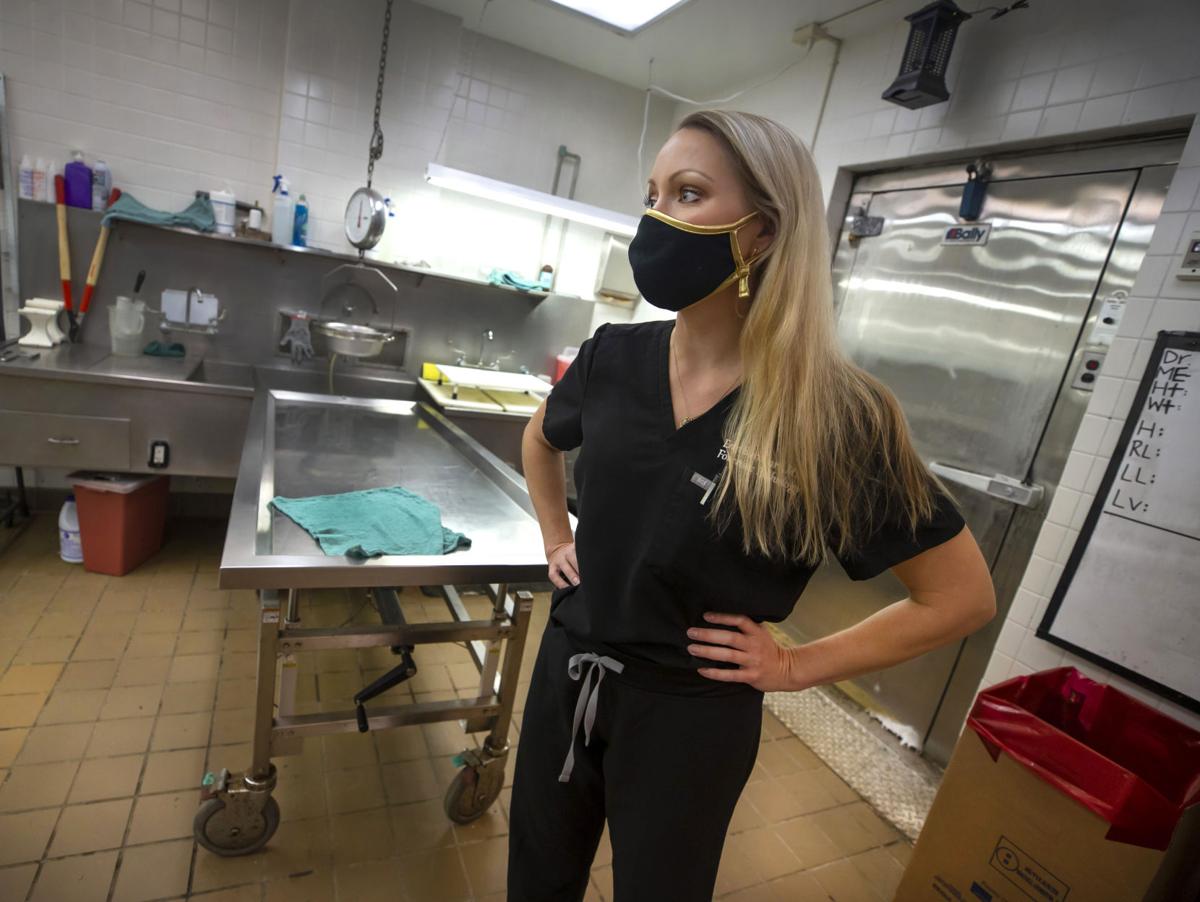 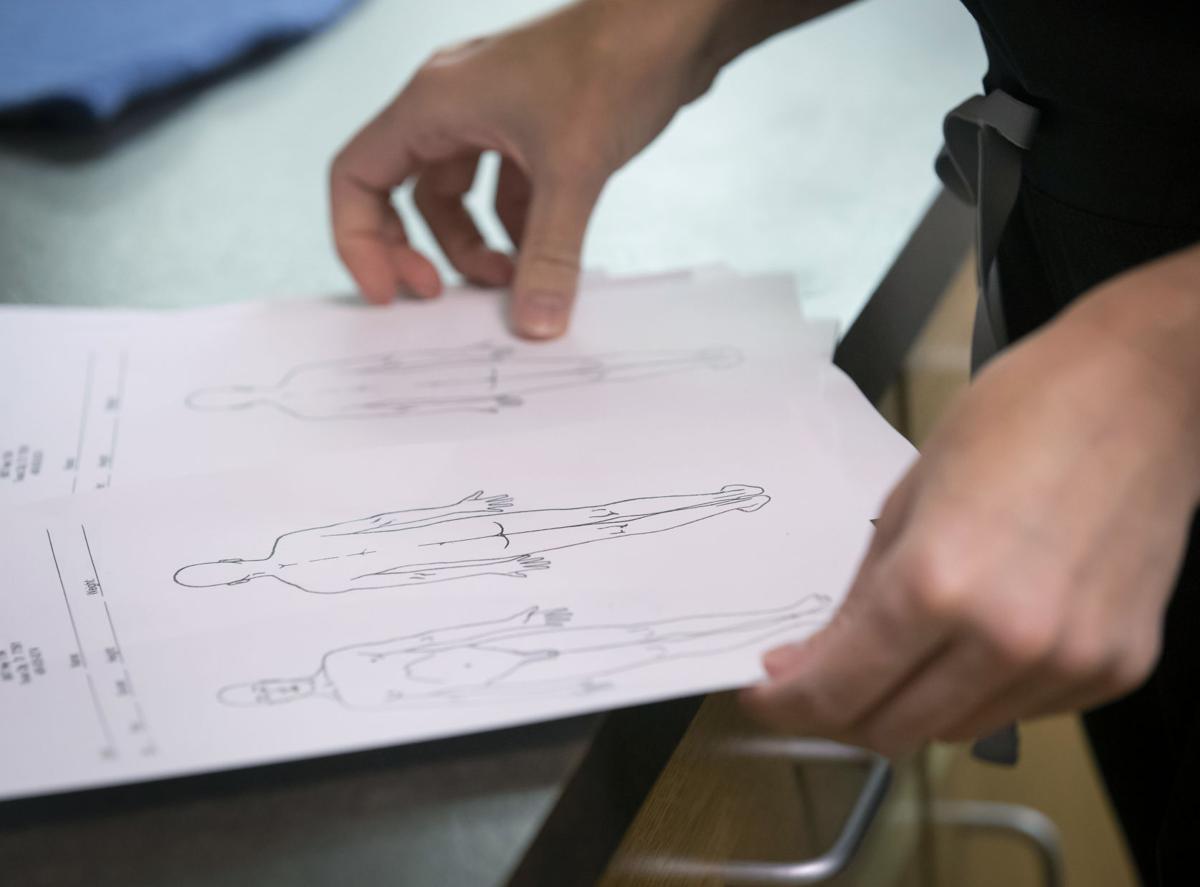 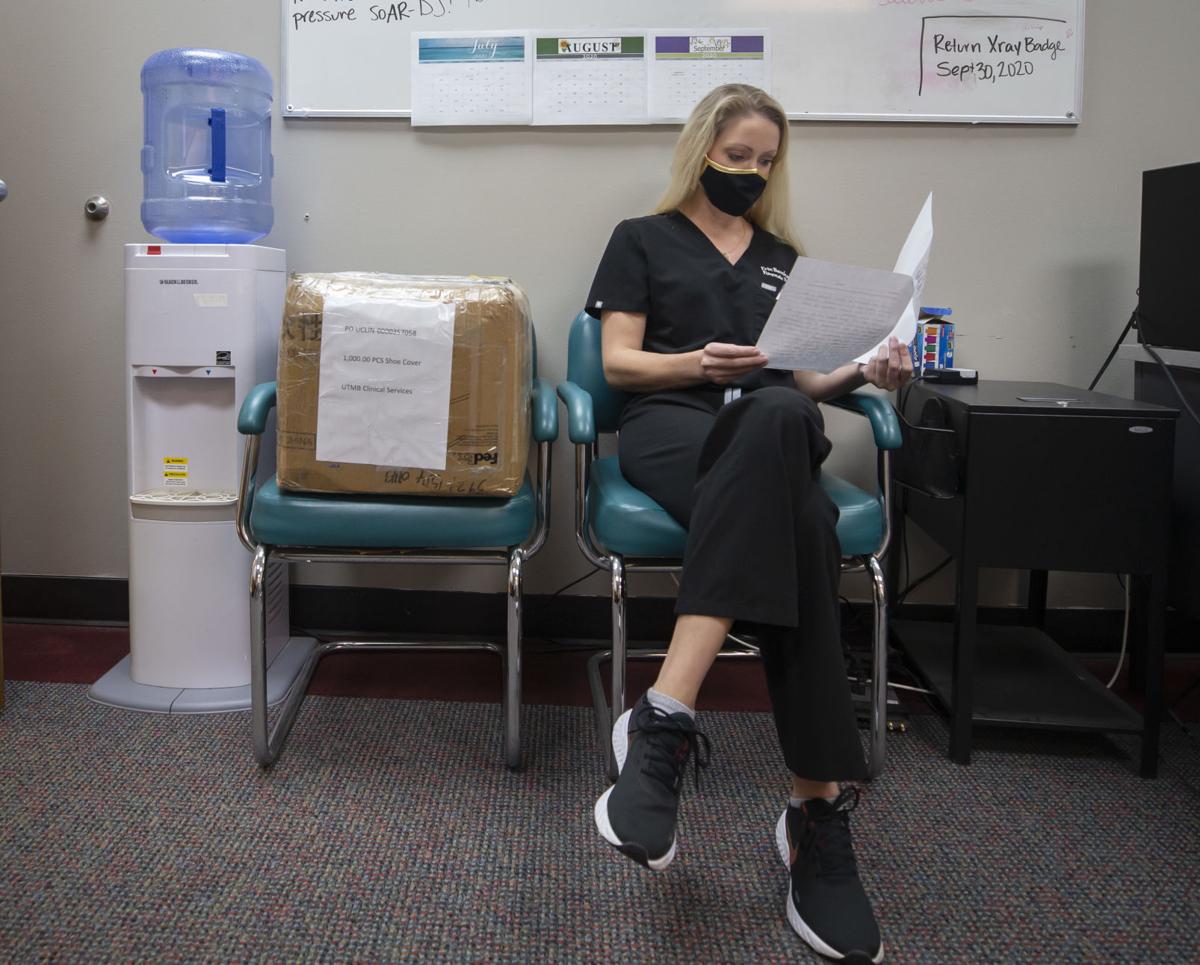 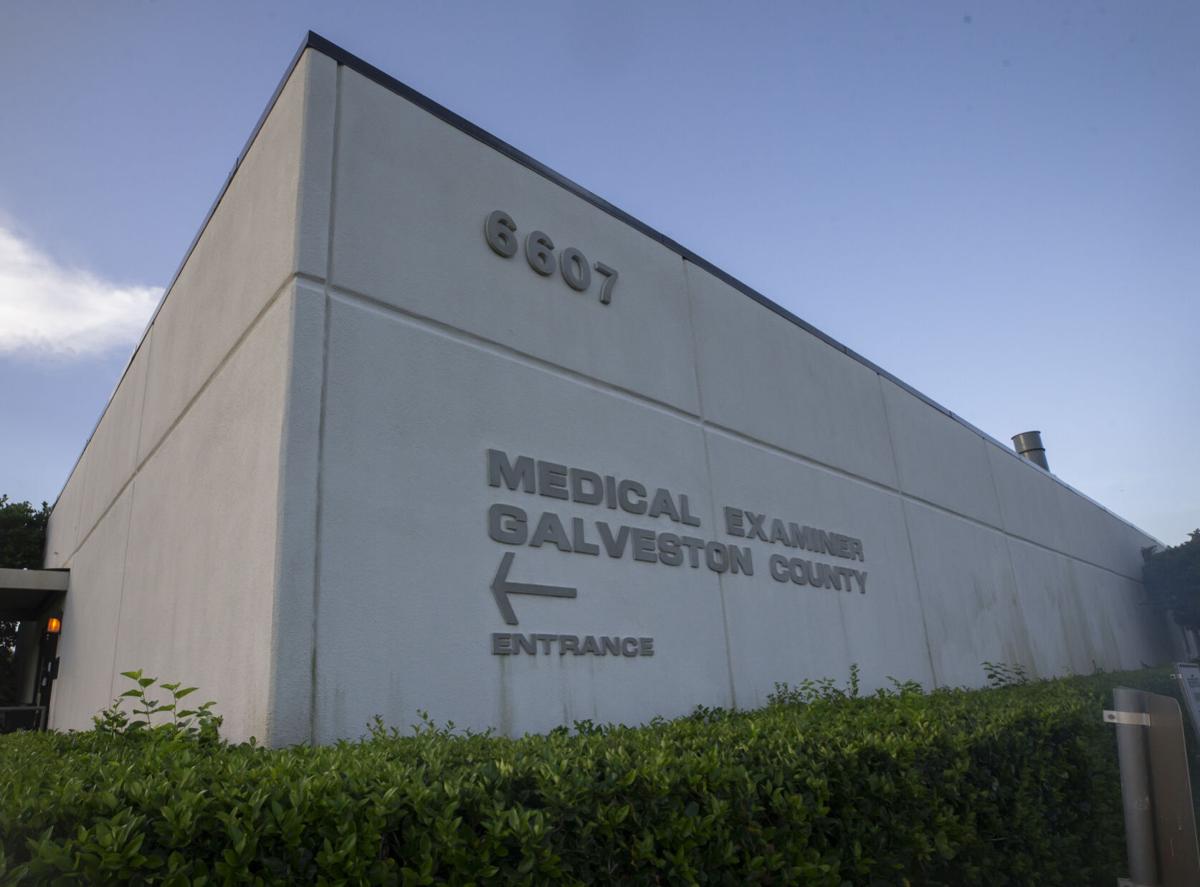 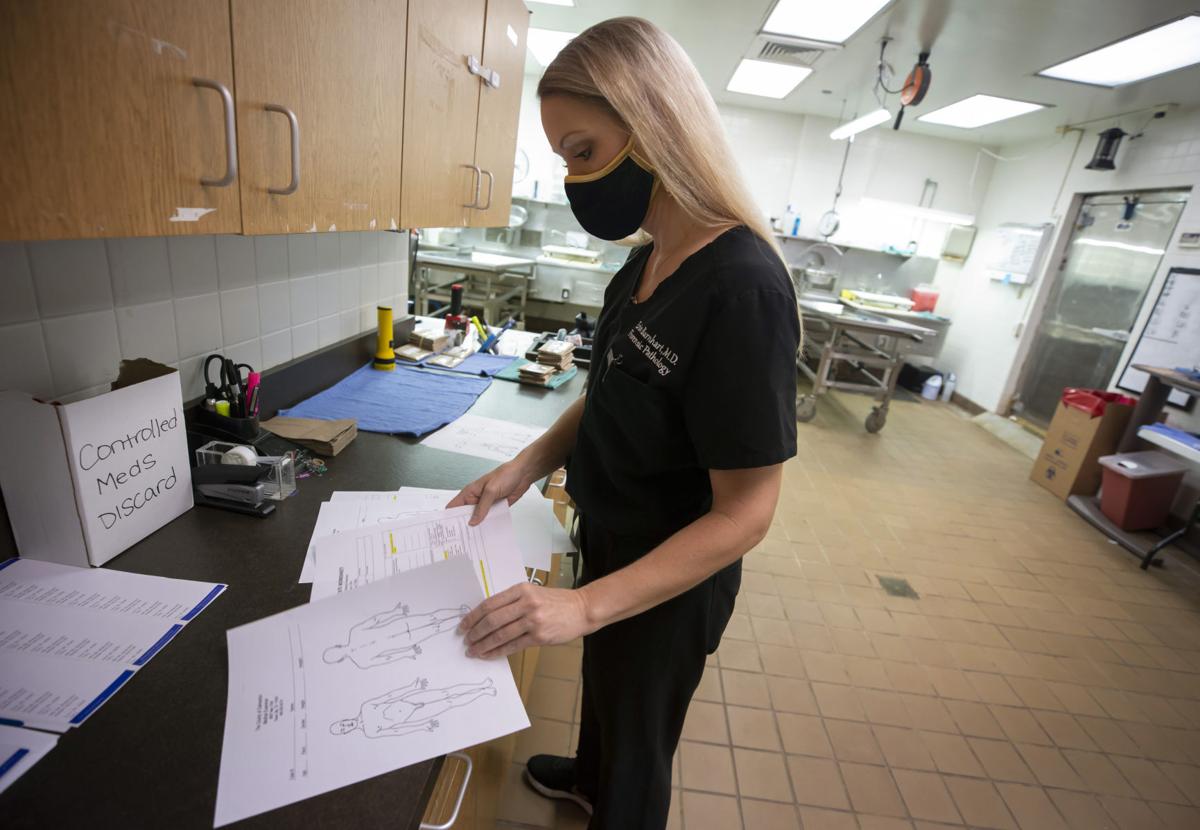 The surge in deaths over the last few months could be the result of a number of causes indirectly related to the COVID-19 pandemic and not the virus itself, Galveston County Chief Medical Examiner Dr. Erin Barnhart said. 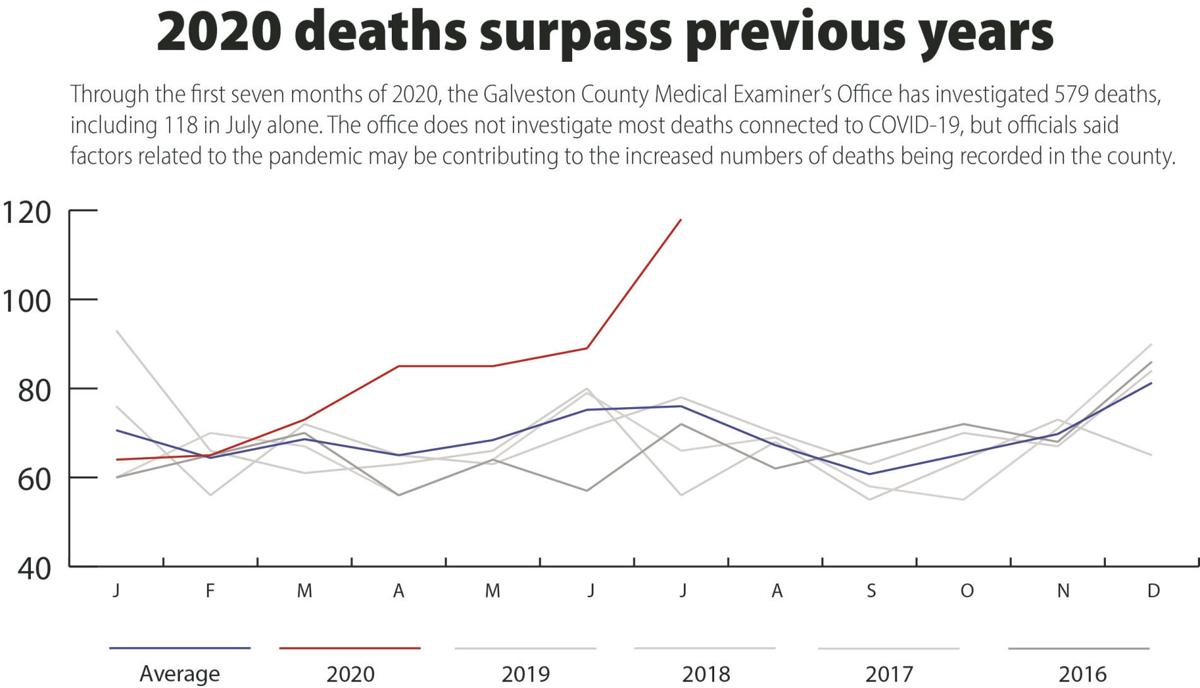 The surge in deaths over the last few months could be the result of a number of causes indirectly related to the COVID-19 pandemic and not the virus itself, Galveston County Chief Medical Examiner Dr. Erin Barnhart said.

At no time in the past five years has the Galveston County Medical Examiner’s Office encountered so much death.

Through the end of July, the office has investigated 579 deaths, officials confirmed Friday. In July alone, the office received reports of 118 deaths.

It’s the highest single number of deaths reported by the office since the beginning of 2016. The next highest total was 93, in January 2018.

And while COVID-19 deaths are constantly in the news and on the minds of Americans, coronavirus infections alone don’t explain the sharp, sudden spike in death underway here, officials said.

The medical examiner’s office doesn’t track coronavirus deaths. It reviews the deaths of people who die outside of hospitals to make a determination when cause isn’t initially clear.

But while the office is not handling coronavirus deaths, officially, one thing has become clear: More people in Galveston County are dying this year compared to years past.

Depending on which source you look to, somewhere between 72 and 93 Galveston County residents have died of COVID-19-related causes this year. This week, the Texas Department of State Health Services began reporting the higher figure, citing information gleaned from death certificates.

What is being seen at the medical examiner’s office, however, is larger and may speak to the secondary effect the pandemic has on people, even if they’re not falling ill with the virus.

Some of the deaths might have been people who contracted coronavirus and did not seek medical care, Barnhart said.

Others might have been people who had the virus, were treated and recovered, only to later die of some other adverse health effect. Still others might have died of virus-adjacent reasons, like failing to go to a hospital for treatment for an illness because of concern about the risk of catching the virus.

“It’s not necessarily the COVID-related deaths,” Barnhart said of the spike.“Most of those people are dying in the hospital, although there are exceptions to that. I think what’s going on is several things.

“People are not going to the doctor like they should be. People are waiting until they’re super sick to go to the ER, whereas before they would have gone to see their primary care doctor,” she said. “There might be a component of people not being able to afford their medications.”

Whatever the reasons, a surge of all deaths is not unique to Galveston County. In Houston, New York, Boston, Detroit and other cities, reports of at-home deaths have coincided with increases of coronavirus cases.

Earlier this year, during outbreaks in the northern states, statistics reported to the U.S. Centers for Disease Control and Prevention noted steep increases in overall deaths in New York, New Jersey and Michigan, among other places.

Like in those places, it’s possible that people who die outside hospitals in Galveston County will never definitively be ruled in or out of the county’s coronavirus statistics.

In cases where a person possibly had COVID-19 but died in a way that requires a full autopsy, such as a homicide, the medical examiner’s office can use morgue facilities at the University of Texas Medical Branch that are equipped to protect against highly infectious diseases.

Some people whose bodies go through Barnhart’s office might have died from COVID-19 but might not be screened for it.

“I think that’s possible,” Barnhart said. “We have access to post-mortem testing, but we don’t have a ton of it, so we’re not doing it on everybody.”

Investigators do try to determine whether a person who is found dead had COVID-19 symptoms, she said. But in cases where a person lived alone or didn’t tell anyone about an illness, that might remain a mystery.

But elsewhere in the county, other people who deal with death say they are bracing for the possibility of more bodies.

Jay Carnes, the owner of Texas City’s Carnes Funeral Homes, said Friday that demand for his company’s services has been at an all-time high over the past month. Carnes owns a crematorium used by multiple mortuaries in the county.

Part of that demand is not simply that more people are dying, Carnes said. More people are seeking cremation services over burials during the pandemic because of concerns about health and safety, he said. Cremations also have become a generally more popular choice in recent years.

As at the medical examiner’s office, Carnes’ employees are busy but not overwhelmed, he said. The demand for funeral services is about what he would experience during winter months of a bad flu season, he said.

The difference is it’s the middle of summer and not yet flu season.

Galveston County’s situation also isn’t as dire as other parts of Texas, Carnes said. Earlier this month, he sent some employees to South Texas to help with body recoveries there after a call for help from state officials.

Given the situation in other parts of Texas and the demand he was already seeing in Galveston County, Carnes doesn’t envision his work slowing down soon. On the contrary, he’s negotiating to purchase new equipment in case of a future surge.

“I’m going to buy additional refrigeration,” he said. “I think it may be needed.”

This illustrates the reality of the COVID-19 pandemic. There is a lot of confusion over how to classify deaths with comorbidity - caused by COVID, partially caused by COVID, not caused by COVID but COVID was there, etc. It makes one wonder what the numbers actually mean.

But there is a measure that is both accurate and useful - and that's the total number of deaths. (There's no confusion about whether a person is dead or not.) The number of monthly deaths in the US from year to year is remarkably consistent. Medical examiners know this, insurance actuaries know this, funeral directors know this. When we see a marked increase in those numbers during a pandemic, it's not unreasonable to attribute that increase to the disease, especially when that rise in death rates tracks the rise in cases.

But we can’t ignore the facts that people are unable to afford meds due to being unemployed or are just not seeking treatment because of fear of infection. Not to mention suicide and abuse rates skyrocketing.

"President Donald Trump on Friday announced that the federal government will cover the costs of COVID-19 tests and treatment for people who have no health insurance.

The new program, which administration officials said Friday they were still finalizing, reportedly won’t cover non-coronavirus expenses. It also won’t help people who have insurance but face out-of-pocket costs for their coronavirus care."

Why does the medical examiner have poor ventilation in her office causing for less examination of people? That seems like a fixable problem that should be addressed immediately.

I drove by the office as I live down the street. Bodies were out the door.